BACK TO ALL NEWS
Currently reading: Buy them before we do: second-hand picks for 10 April
UP NEXT
Volkswagen ID Aero is EV Passat equivalent with 385-mile range

Buy them before we do: second-hand picks for 10 April

Our round-up of flash motors opens with this Ferrari F430 F1 with a difference. It’s a left-hooker, which explains the ‘low’ price. Don’t worry about that, because where are you going to put a Ferrari through its paces in camera-filled Britain? And in any case, would you risk its suspension, tyres and steering at speed on our pockmarked roads?

Thought not. Better to save it for road trips abroad, where you’ll blend in nicely. And when you’re finished, you’ll have all of Europe to offer it to.

On that point, it helps that our find is resale red with a black leather and carbonfibre interior – although we’re concerned that it has ‘service history’ rather than ‘full service history’. 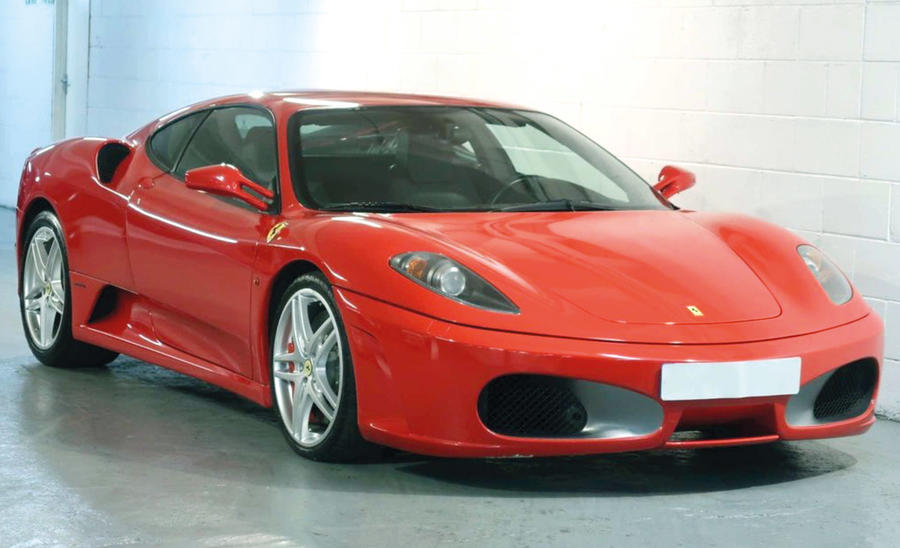 The F430’s rear-mounted 4.3-litre V8 produces 483bhp and uses chains rather than cambelts, which addresses that particular Ferrari bugbear. A steering-mounted dial called a manettino allows the driver to control the electronic differential as well as damper settings, gearshift speeds and throttle response.

From its launch in 2005, the F430 was a well-sorted car, but if we were serious about our particular car, we’d check the exhaust manifold and the engine mounts for cracks. Because it has a dry sump, we’d wait to dip the oil until the engine is piping hot. We’d hope that what service history this car has provides evidence of regular transmission fluid changes, and while we’re on the subject, look for leaks from the hydraulic actuator.

The F430 is heavy on brakes and suspension components, so we’d check those, as we would the windscreen, which is expensive and tricky to replace. And fingers crossed the dashboard leather hasn’t shrunk. 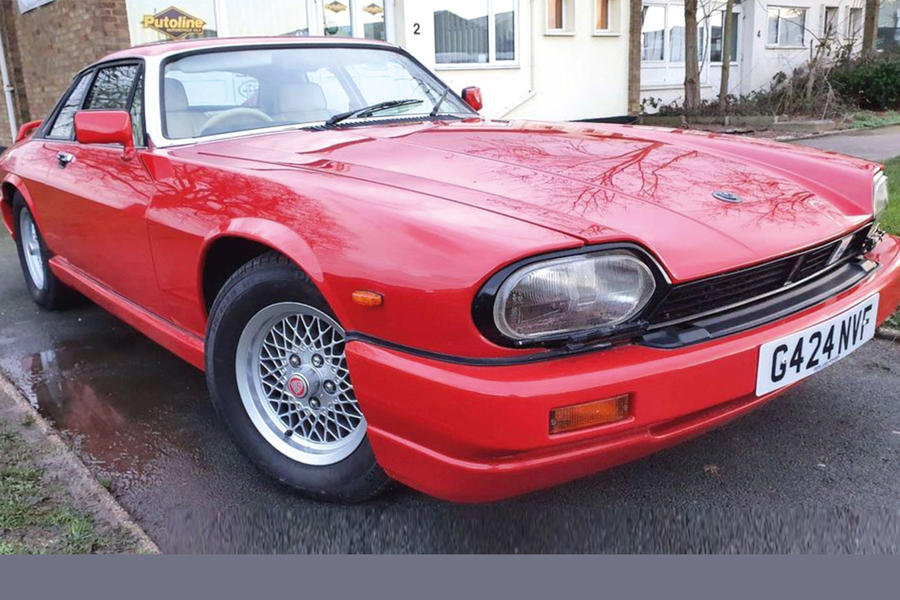 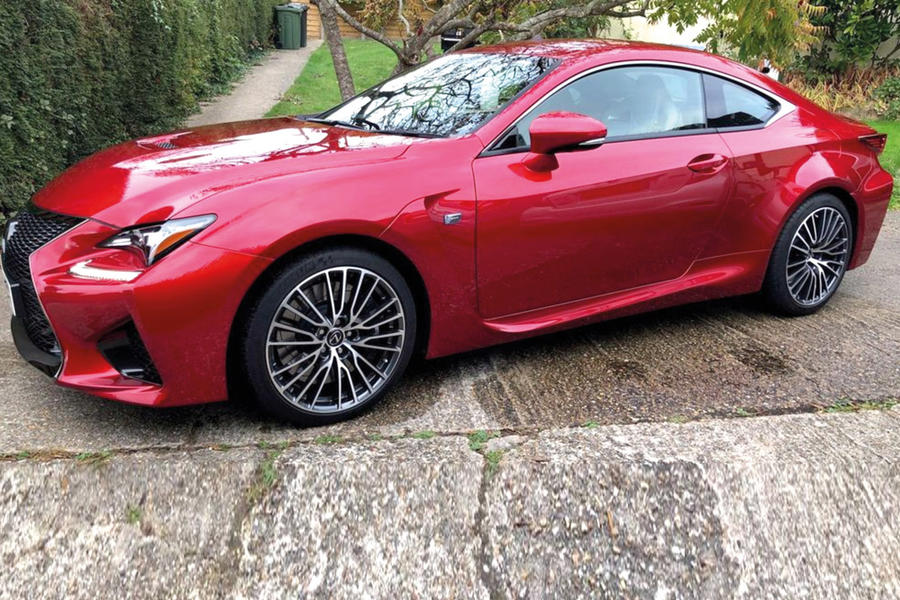 Lexus RC F 5.0 V8 £42,000: It may bow to the BMW M4 and AMG C63, but the RC F gives nothing away in terms of presence, especially in the metallic red of this 2017-reg, 9000-mile example. It looks a tad pricey, but it has the optional torque-vectoring diff and a full Lexus service history. 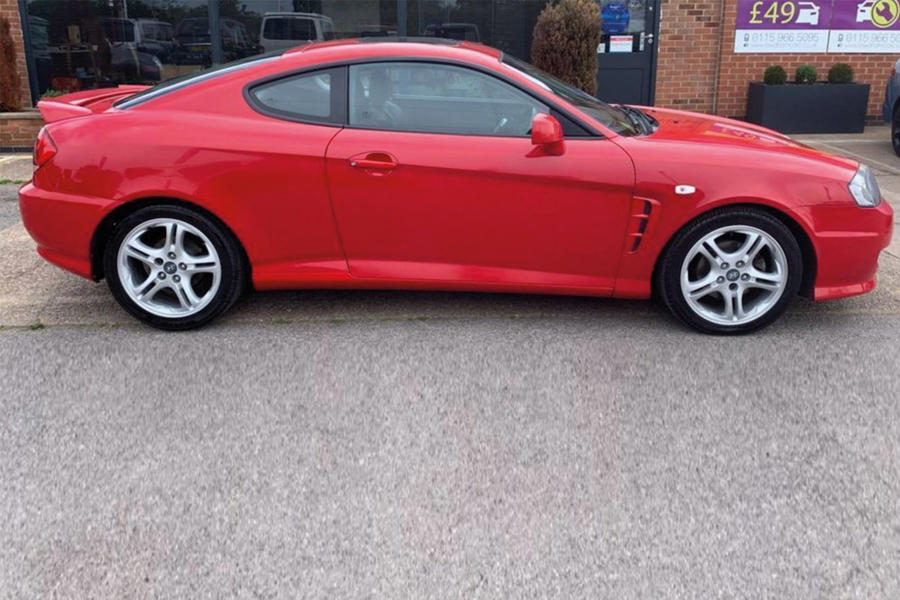 Hyundai Coupé 2.0 SE, £1495: If you can’t afford a Ferrari 456 GT, there’s the Coupé, so said Hyundai – but perhaps that’s why Specsavers was invented. Anyway, the Coupé is cheap and reasonably cheerful today. Our featured car is a 2006-reg with 78,000 miles and leather trim inside. 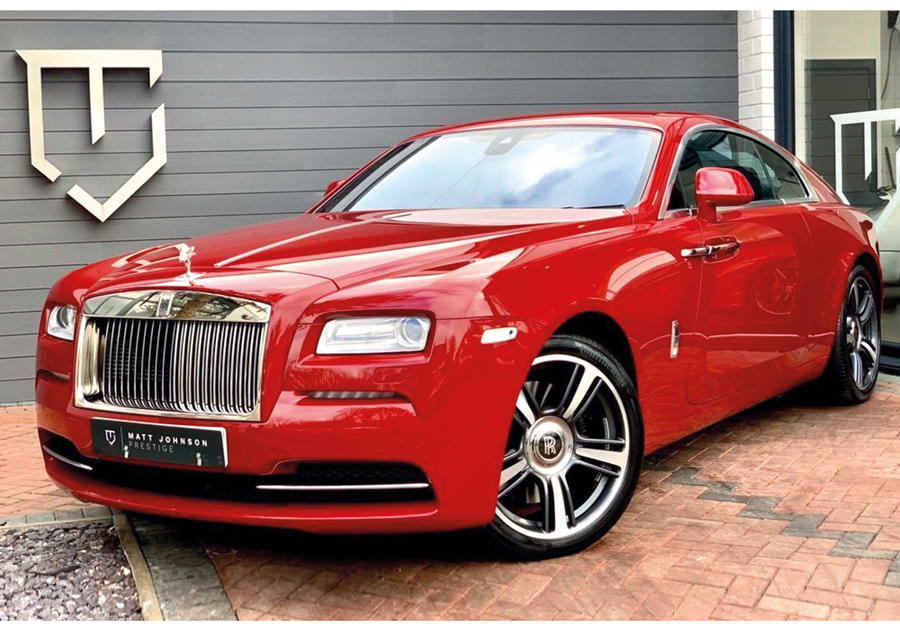 Rolls-Royce Wraith 6.6 V12, £138,980: Should a Roller really be red? At least it’s the sporty Wraith. Lovely car, the Wraith, and this 11,000-mile, 2016-reg example, with the balance of the R-R warranty and the starlight headliner, will certainly cut a dash among all of those Bentleys outside the clubhouse. 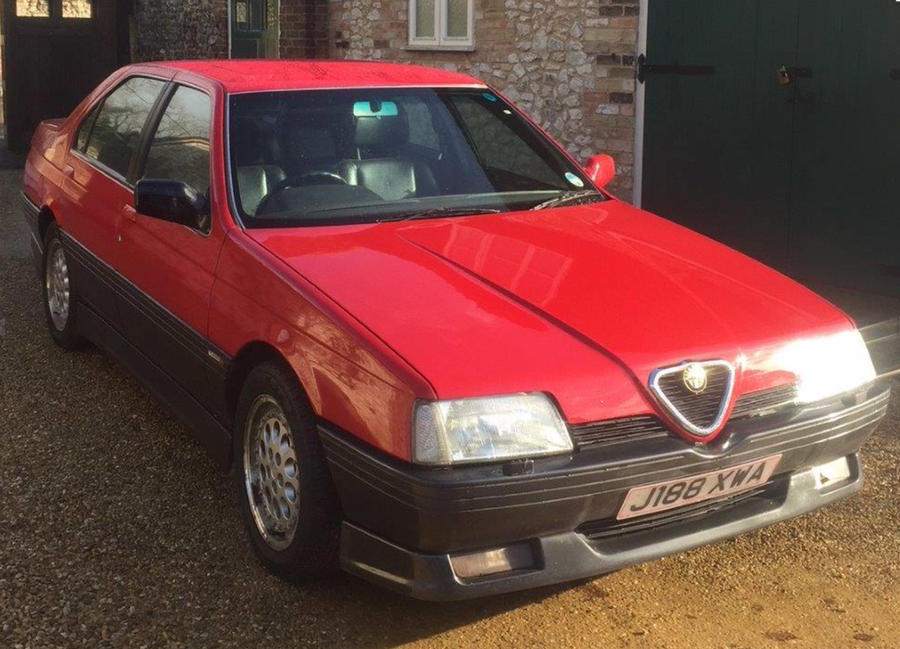 Alfa Romeo 164 Cloverleaf: There are only around 90 examples of the 164 left on UK roads now, with a further 300 on SORN. So it’s rare, which isn’t exactly surprising, given that it’s a big old Italian executive saloon. It is an Alfa Romeo, though, which makes it more interesting than most of its ilk. It was launched in 1988 and, in addition to the regular 2.0-litre Twin Spark version, there was the much more charismatic 3.0-litre V6 Cloverleaf. One of these, a 1991-reg with 146,000 miles, passed through auction recently, making a solid £4240. Remarkably, it had been owned by the same family from new. 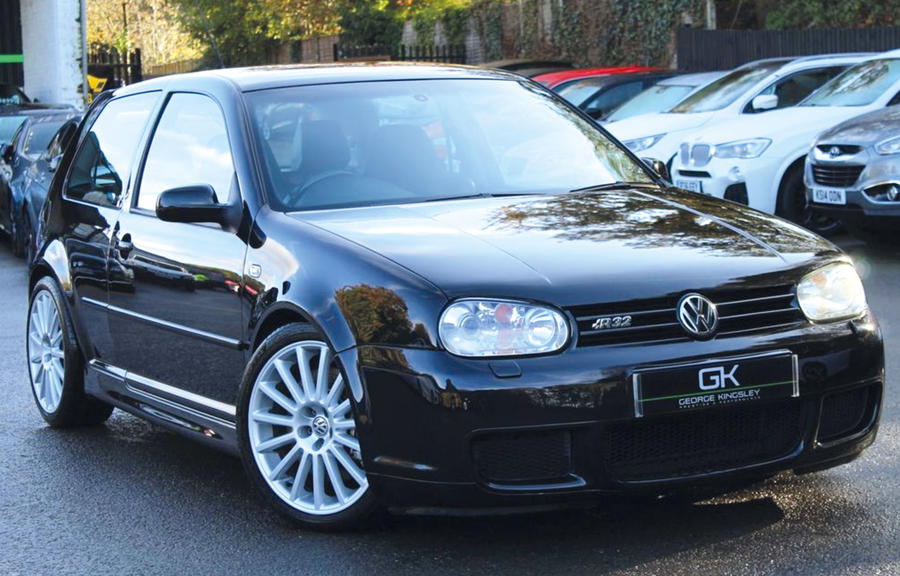 Volkswagen Golf R32, £7995: After all the flash red cars, something reassuringly black and Golf. Perhaps it’s because the Mk4 GTI was so disappointing that the more exotic R32 is regarded with such affection. Contemporary rivals, the Ford Focus RS and Honda Civic Type R, had the edge, but today it’s the R32 that will have weathered the passing years with greater aplomb. There are enough in the classifieds to make choosing one an absorbing experience. Prices start at around £5000, but we settled on a really nice 03-reg with 132,000 miles and a solid service history. 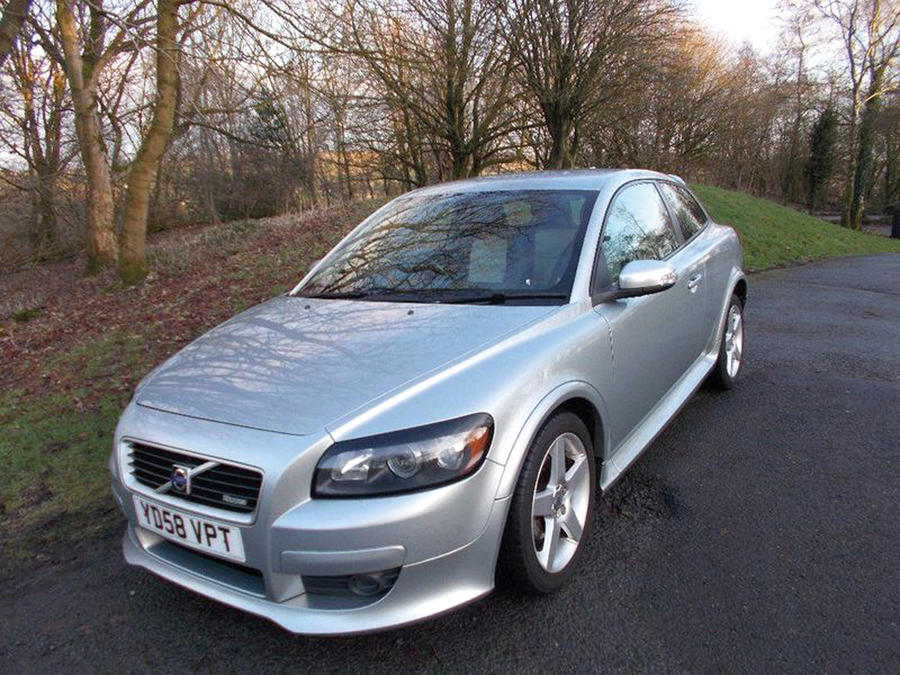 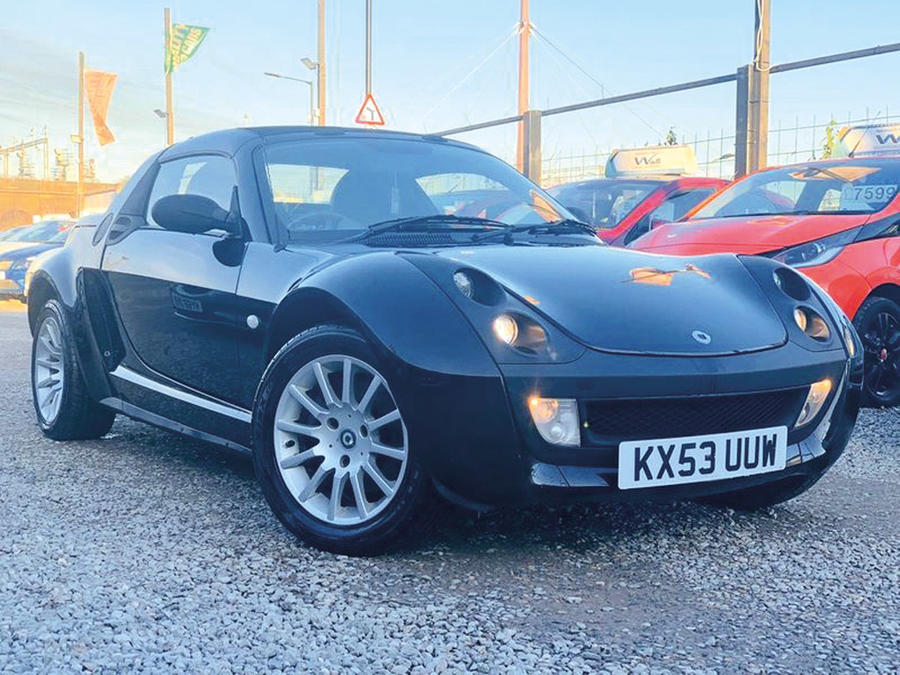 Max Adams: Your first car is a big deal. Not only must it impress your mates, but it must also meet the approval of your parents. They’ll probably be paying for it, after all. So, I’ve gone for this quirky 2008 Volvo C30. It’s a handsome hatchback with space for four, plus it will be ultra-safe, thanks to multiple airbags and ESP to keep the bank of mum and dad happy.

Mark Pearson: Your first car is indeed a big deal. It must be something to introduce a young person to the pleasures of driving and show what can be achieved. Inevitably it will be done on the cheap when you’re starting out, and no car is more fun for the money than the weeny Smart Roadster. Hood down, foot down and dressed to kill. A Volvo? How sensible…

MA: Weeny being the operative word for yours, since you can fit only one other person in it. Not a car for popular people, then.

MP: I don’t think it’s a good idea to give randy teenagers any back seats.

MA: Hey, mine is basically a Ford Focus underneath, so the enjoyment they’ll be getting will be from behind the wheel.

MP: To be honest, when their friends find out they’ve got a Volvo that’s a Ford underneath, I don’t think they’ll want to travel in it anyway… My 2003 car is really a Mercedes. In fact, it’s practically an AMG GT Roadster. MA You’re such a snob!

Ferrari to slow range expansion in 2020

Are Autocar readers stuck in the 70's?

You forgot to add that it will rust if a single water drop touches it (it's all alloy, so that's not going to happen), it will overheat in traffic (no they don't), the driving position is awful if you don't have long arms and short legs ( I'm 6'2", with a normal arm to leg ratio, and fit in them with no issues whatsoever), You can't get parts for them ( a complete non-issue), it will leak oil faster than you can put it in (no it won't), it will be completely unreliable (no it won't), the electrics won't work (yes they will), and it will be worthless when you try to sell it (tell you what, buy a 430 & a Jag F Type for @ £65k each, keep both for 5 years, and see which car loses the most money-I'll guarantee it's not the Ferrari!)

The car shown is a bargain LHD because someone bought it "cheap" on the Continent, hoping to sell it for a much higher price in the UK - And then discovered no one really wants LHD Ferrari in the UK (Don't believe me? - Check out how many LHD Ferrari's are for sale right now - Some have been for sale for over 2 years!)

In addition, you'll have no idea if the car has ever been in an accident, because HPI doesn't have access to insurance data bases abroad.

Love in the Time of Corona

Not sure I agree that an R32

Not sure I agree that an R32 would have weathered the years better than a focus RS or civic typeR, like the civic many will have been modified and like the civic the standard cars will be at a premium, but the civic doesn't seem to suffer with rust as much as the Golf, and being a civic will be a more reliable prospect, in fact ep3 type Rs seem to be going up in value.

First car, a smart roadster? for introducing the driver to the pleasures of an awkward semi automatic, surely a new driver needs to hone their skills with a decent manual gearbox, something the fiesta has always been praised for, get a sporty looking low powered 3 door.