BACK TO ALL NEWS
Currently reading: The man who buys the Ferraris you really shouldn't
UP NEXT
Hardcore BMW M4 CSL brings 542bhp, sheds 100kg

Serial Ferrari owner Scott Chivers buys the Ferraris you really never should, such as this project car he’s dubbed Ratarossa. We meet him
Open gallery
Close

It’s Stig of the Dump meets Don Johnson - a chop-top Ferrari Testarossa crudely stiffened and finished in primer; the antidote to all those gleaming Rosso Corsa Ferraris piloted once a year by meticulously groomed squillionaires, dressed to impress in prancing horse regalia. It belongs to Scott Chivers, a man with interesting views on Ferraris and owning them...

“I have red Ferraris but it’s not my favourite colour and I don’t drive the cars to be seen,” he says. “My daily driver is a black 360 Challenge Stradale. I’ve owned it for eight years and done 50,000 miles in it. I go to the shops and take my kids to school in it. I love the fact it’s used – and looks it.”

His Testarossa, or Ratarossa as he calls it (a name inspired by the term ‘rat’, short for ‘recycled automotive transport’ exemplified by superficially rusty split-screen Type 2 Volkswagens), is the ultimate expression of Scott’s Ferrari philosophy. Its grey body is rough and rippled, the engine cover is barely secure, the slender metal stiffening beams are visible between the sills and seats, the door cards flap around and the leather trim around the A-posts and behind the seats is as neat as my gift wrapping... 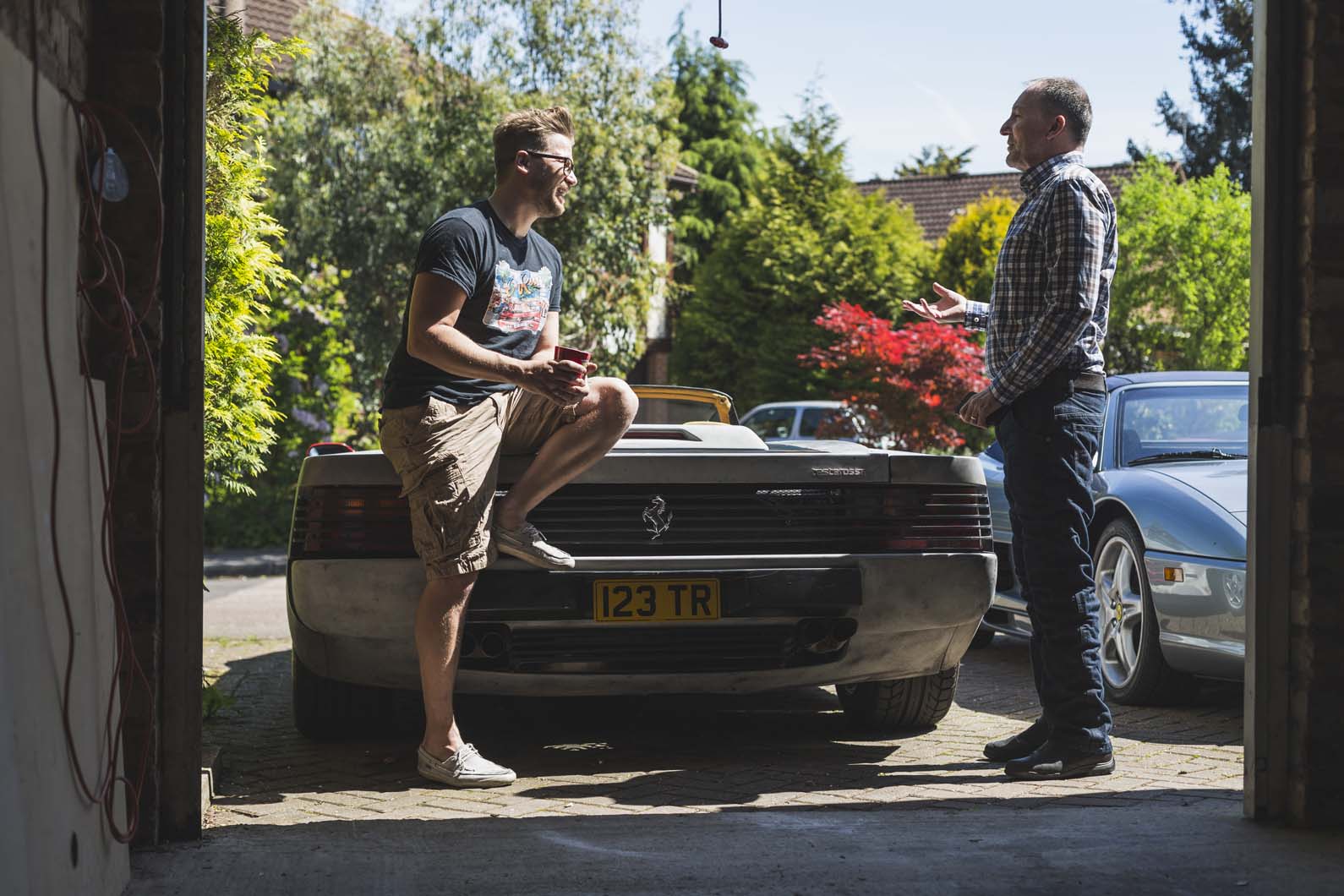 Does it look low to you? That’s because it sits on lowering springs. The weight of the strengthening beams forced the car down at the back. Scott says he ripped out the old suspension and ordered three sets of front springs of different specs so he could play around with the ride height to equalise front and rear. Next thing, he’ll be saying there’s an old Vauxhall four-pot under that rear cover. Not a chance: Scott props it open with a piece of 4x2 to reveal the car’s original, and suitably grimy, flat-12 engine. Somewhere in there is the original five-speed manual transmission, too, as evidenced by the dull alloy transmission gate downstream in the cabin.

Scott bought the car from a bloke in California. At the time, he was looking for an engine cover for his 1990 Testarossa coupé, a left-hand-drive car he’d bought from the Netherlands. (Seven of his Ferraris are left-hookers.) There he was, surfing the web, when up pops this four-year-old ad for an unfinished Testarossa spider project car.

“I was intrigued and called the seller on the off-chance it was still available,” says Scott. “Incredibly, it was. He’d bought it intending to restore it but it just sat in his garage gathering dust. The owner said he wasn’t interested in selling it to anyone who would just break it for spares. I told him I would take on the project and get the car roadworthy. We agreed a deal and I shipped the car here to the UK. All in – the car, shipping, taxes – it cost me £16,000.” 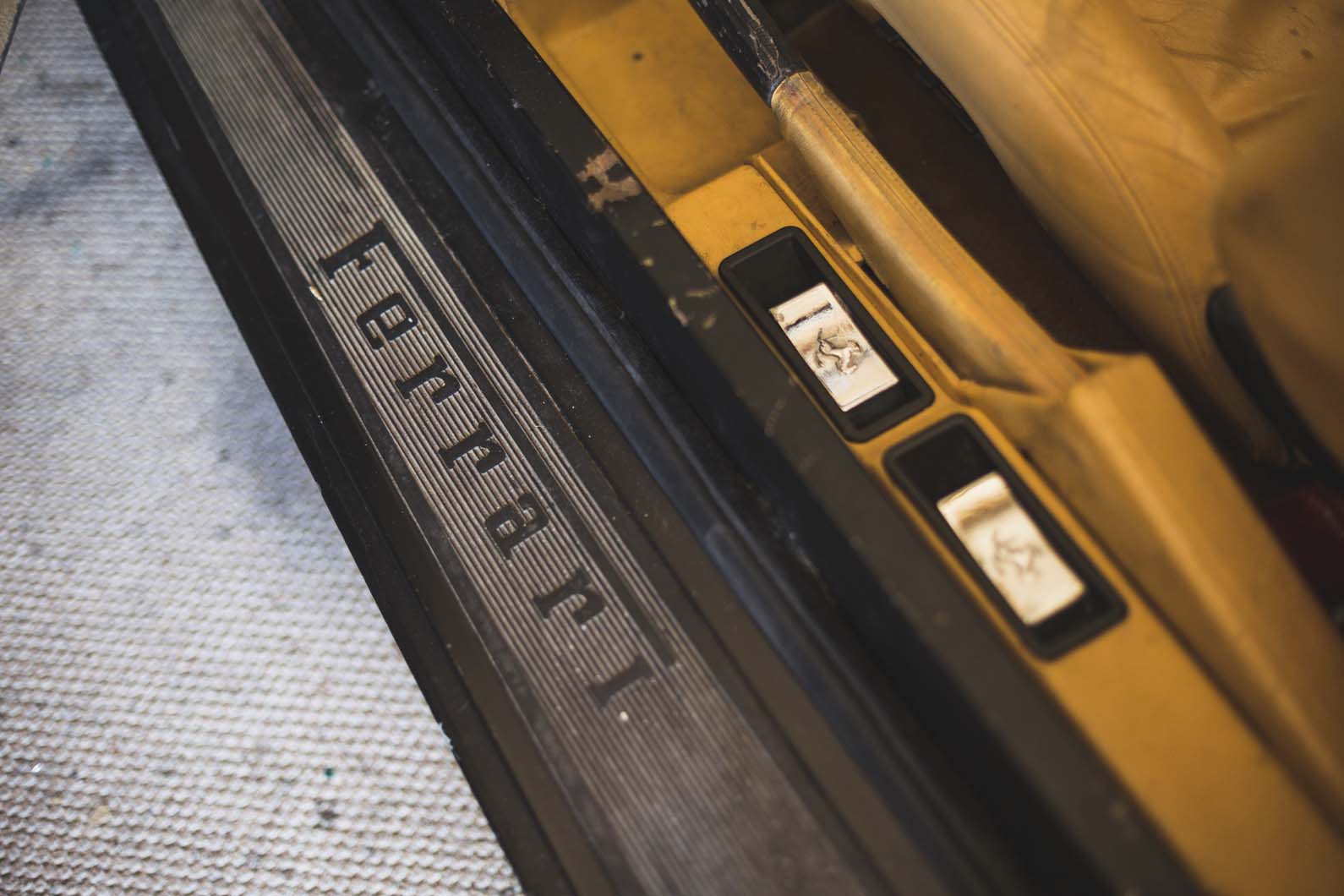 Ferrari made only one Testarossa Spider, commissioned by company boss Gianni Agnelli in 1986. It was sold by his children in 2016 for £1.2 million. Naturally, it was a proper job, unlike the dozen or so copycats, including Scott’s, that followed from body shops. At some point, Scott’s car was owned by a US kit car company that used it as the basis for its replica Testarossas. Then one day, perhaps following a crash, they cut the roof off, at which point, says Scott, Ferrari stepped in to protect its copyright...

“When I received the car and the two crates of bits that came with it, my intention was to rebuild it,” says Scott. “I had my other Testarossa coupé that had also just arrived so I used that as a blueprint to work outwhere the bits from the crates should go and as a wiring guide. I was able to swap parts between the two cars so I was able to cheaply and quickly verify if things worked or not.”

But as Scott’s giant Ferrari puzzle came together, the more he loved its raw and unfinished appearance. No bad thing, either, since to bring it to factory standard would have cost a bomb and, in any case, without a roof, it could never be a purist’s Ferrari and his investment would never be recouped. He decided just to enjoy the build, make the car mechanically perfect – and stick with the rat look. 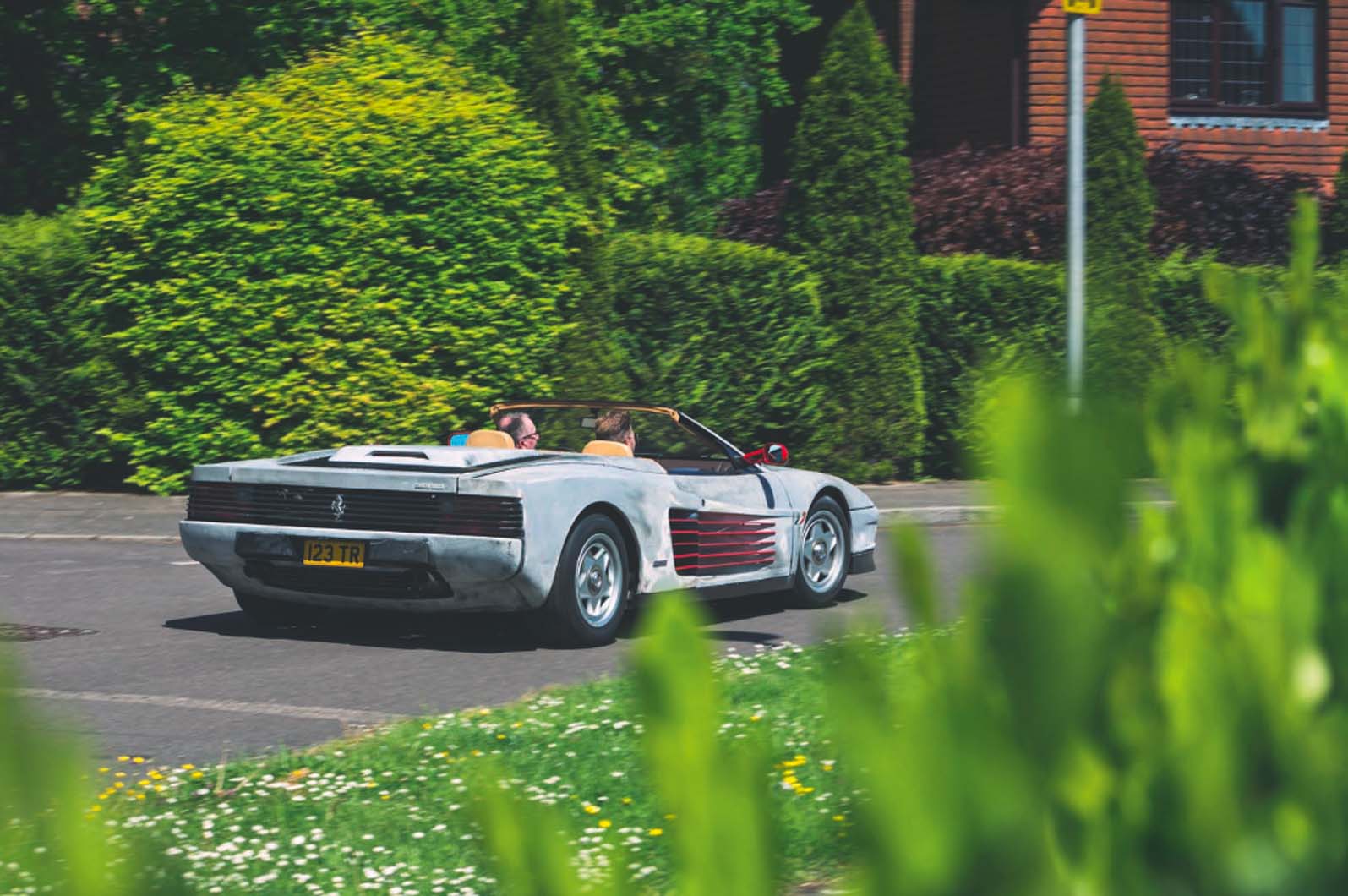 “For me, the rat look is where the car is perfect under the skin but looks like it’s been sat around, untouched and never restored,” says Scott.

“Bits I’ve since acquired or refitted were finished in red so I’ve left them because they add a touch of colour.” To describe Scott as a Ferrari nut is something of an understatement. His passion for the marque began as boy when he saw a competition on the back page of Reader’s Digest to win a 308. At the time, his dad never stopped going on about the 246 Dino he dreamed of owning, and then Out Run, the Sega game, came out, featuring a Testarossa Spider.

At this point, I should point out that Scott, a down-to-earth chap of 42, appears to be comfortably off but by no means loaded. He’s freshly divorced and is taking a year out of his job as an IT bod to consider his future. 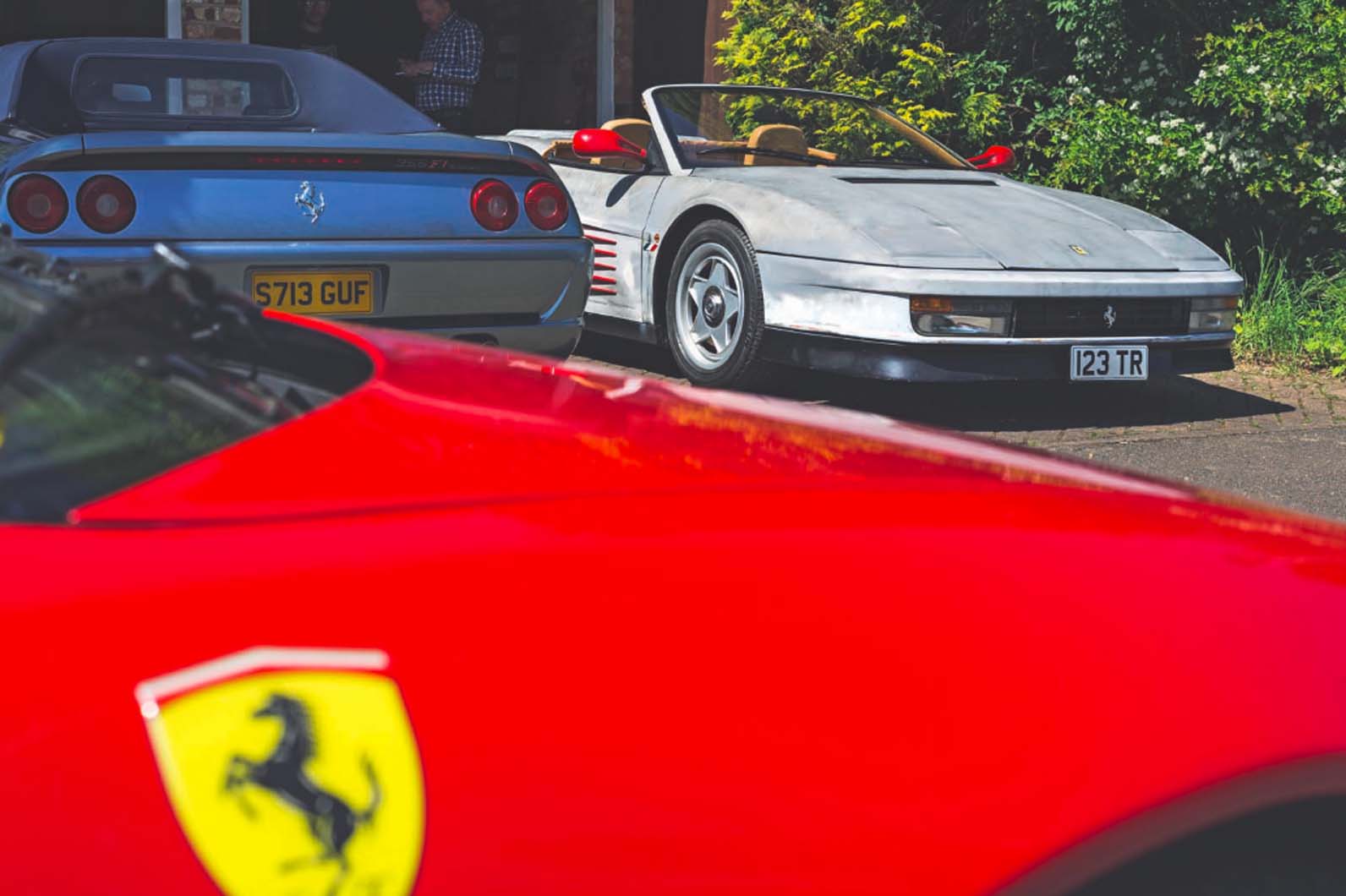 He has recently moved into a small estate somewhere in the Berkshire commuter belt; nice houses but with driveways too small for more than two cars. It’s why I have no trouble finding his place, since out on the road in front of it is part of his Ferrari collection: the Ratarossa and an F355 Spider; on the driveway, a 355 F1 Spider; and in the double garage, where the Ratty lives when it’s raining or Scott’s working on it, a 308.

In all, Scott has eight Ferraris: two 355s, three 308s and the Ratarossa, all left-hand drive, and the 360 Challenge Stradale and a 456 GTA, both right-hand drive. In addition, he has a 1969 Porsche 911 T Coupé and a Volkswagen Golf GTI Mk1. Some are here and the rest are with friends and family. They’re insured for £500,000 and his annual premium is £3000. How has he done it? “I’m the guy who buys the Ferrari you shouldn’t: the one with uncertain history, in the wrong colour or the unfinished project. They’re relatively cheap to buy and I make a profit selling them on when I’ve sorted them out. I plough the money back into the collection.” 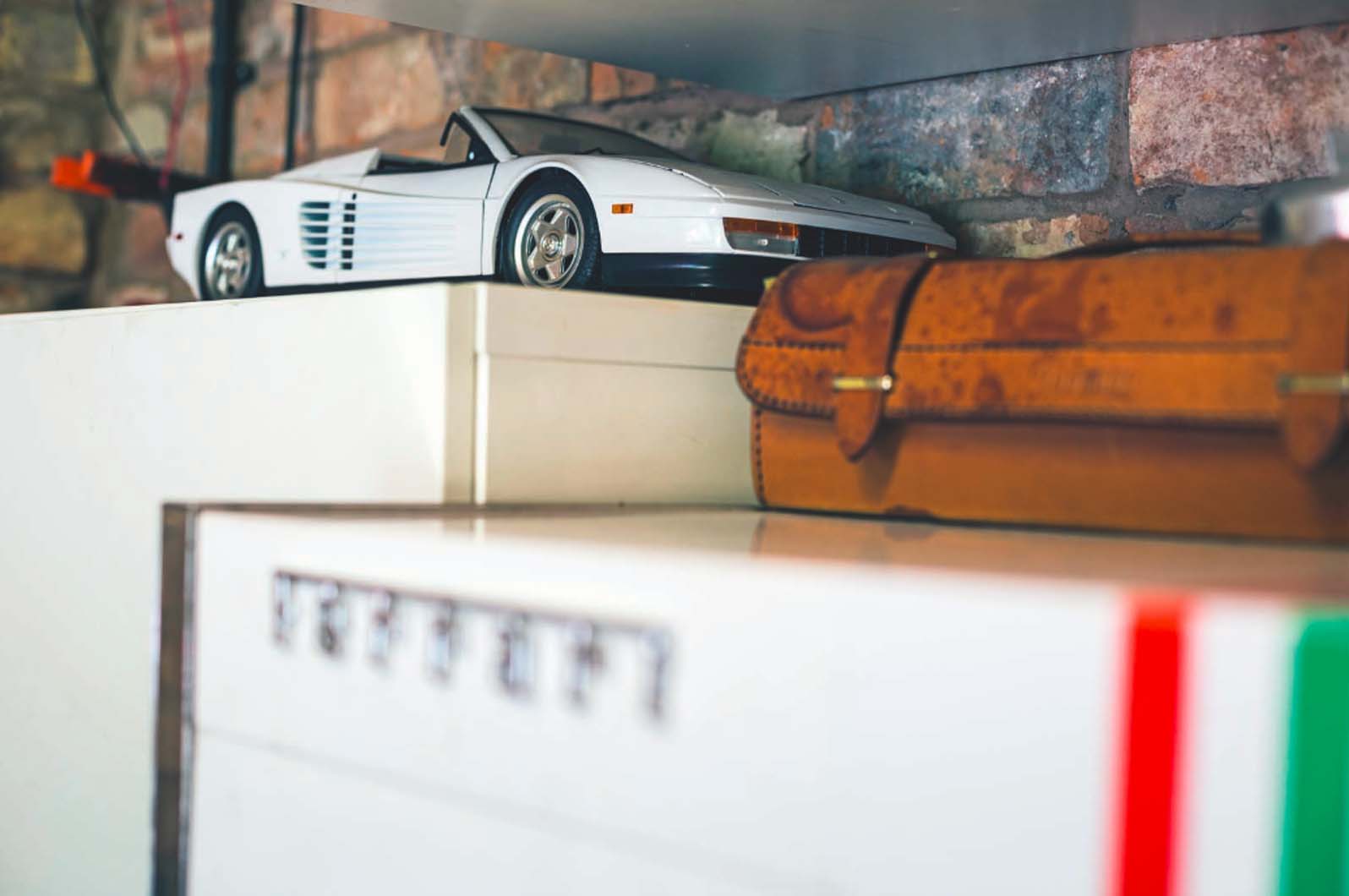 Over time, Scott has become a whizz with the spanners. He’s self-taught but little, short of dropping an engine for a timing belt change, is beyond him. He’s constantly on the internet, seeking out deals, parts and technical advice.

Next on Scott’s Ratty to-do list is to refurbish the car’s steering and front suspension, give the engine a thorough service and tidy up the cabin. He’ll fit a sports exhaust too. It’ll all be done properly using genuine parts. As a final flourish, he’ll detail the engine so it looks like new.

Is there one Ferrari Scott would sell his collection for? “Yes: an F40. It would be the only one that would be driven every day. I did once suggest to my ex that we extend the mortgage to buy one.”

No need to ask why it’s just him and eight Fezzas these days. 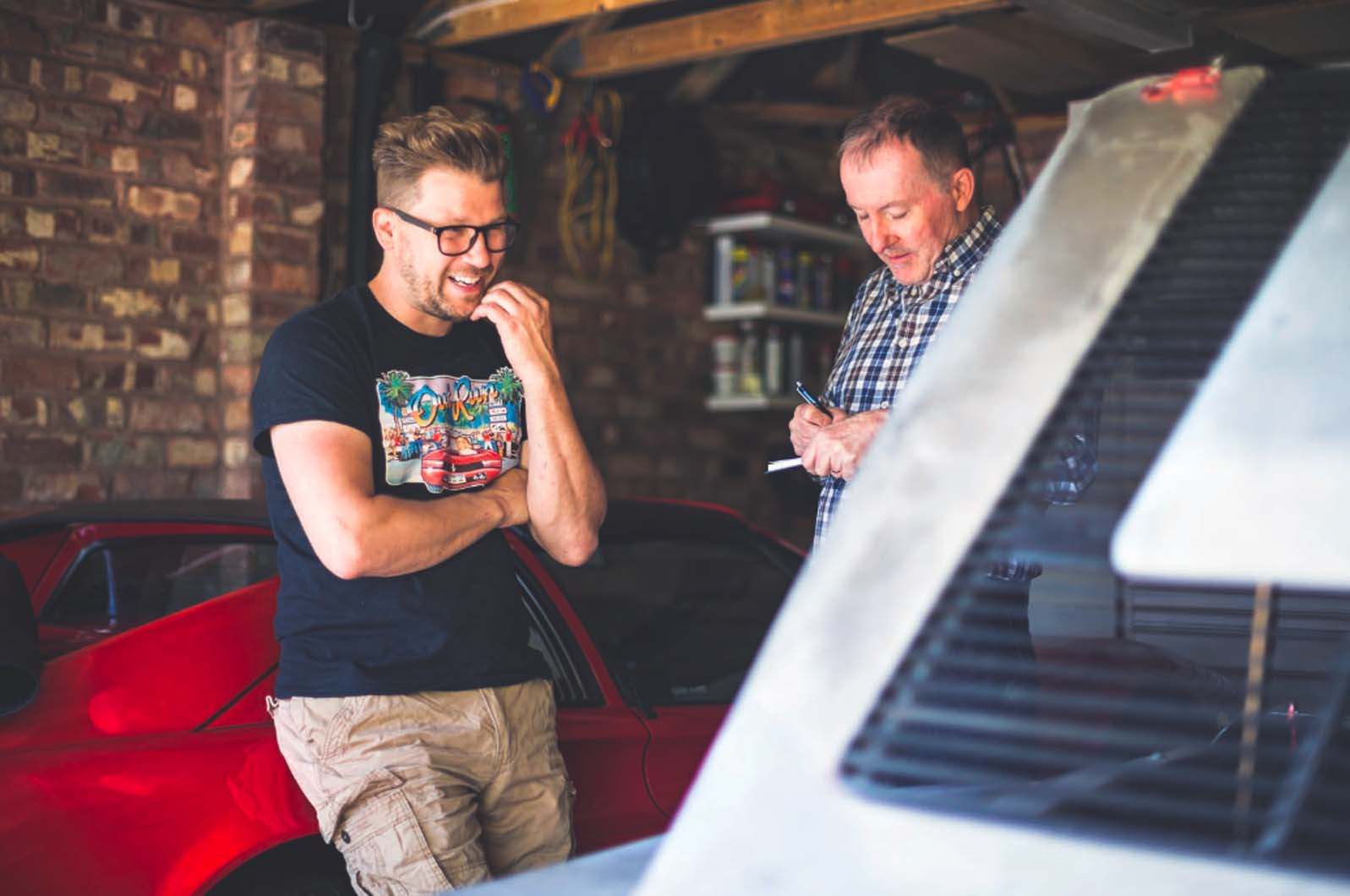 Fortunately, the interior handle and door card on the driver’s side of Scott Chivers’ left-hook Testarossa spider is secure. Pull the handle on the passenger side and it comes off.

No worries, I’m in the driver’s seat, wearing the stringbacks Scott thinks are total Don Johnson. I’m about to turn the ignition key but, first, let us pray. Down on my right is the famous Ferrari gate. I can’t wait.

Reverse is down and forward; first, straight back. Better get those two right. I fire up the flat-12. There’s a cacophony of mechanical gnashing and a delicious intake howl when you dare to blip the throttle. No wonder Scott’s elderly neighbour complained to the council. 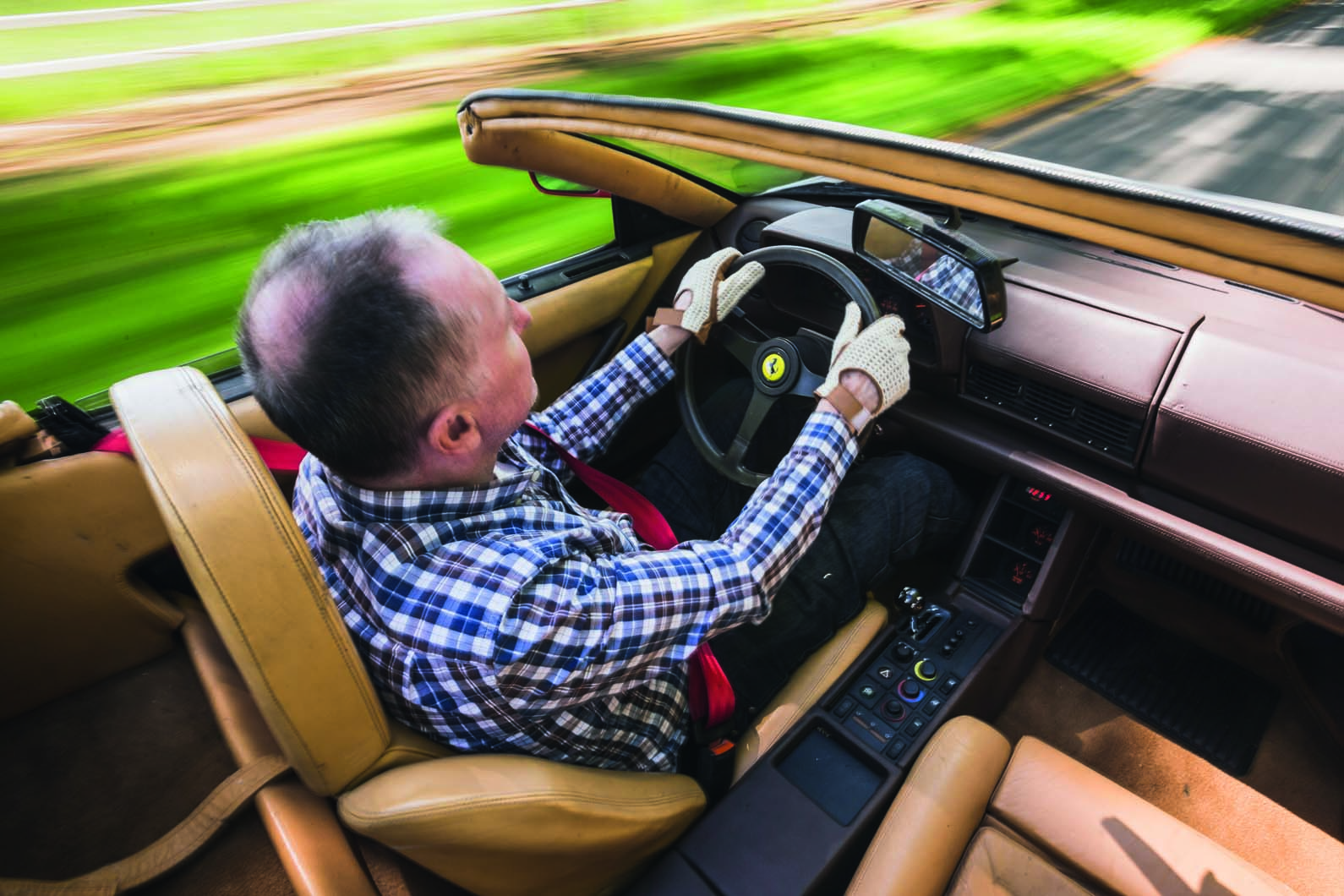 The pedal box is for Formula 1 drivers in Sparco slippers. I’m wearing motorcycle boots. I practise telling my B from my A. C, the clutch, weighs a ton. So do the front wheels. I can barely operate the steering.

Pulling away is surprisingly smooth. First to second gear and beyond is a deliberate operation, although there is some spring bias to help tee the selector for each slot. There’s no lag or hesitancy as the engine accepts the next cog. The temperature looks good and the blue smoke on start-up has cleared.

Given that its body has been stiffened with the equivalent of a garden gate, the Ratarossa feels surprisingly taut, at least at 40mph. The brakes are firm but progressive too. The steering has lightened up but it’s not what you’d call quick. You have to wind on the lock nice and early to avoid ploughing straight on. 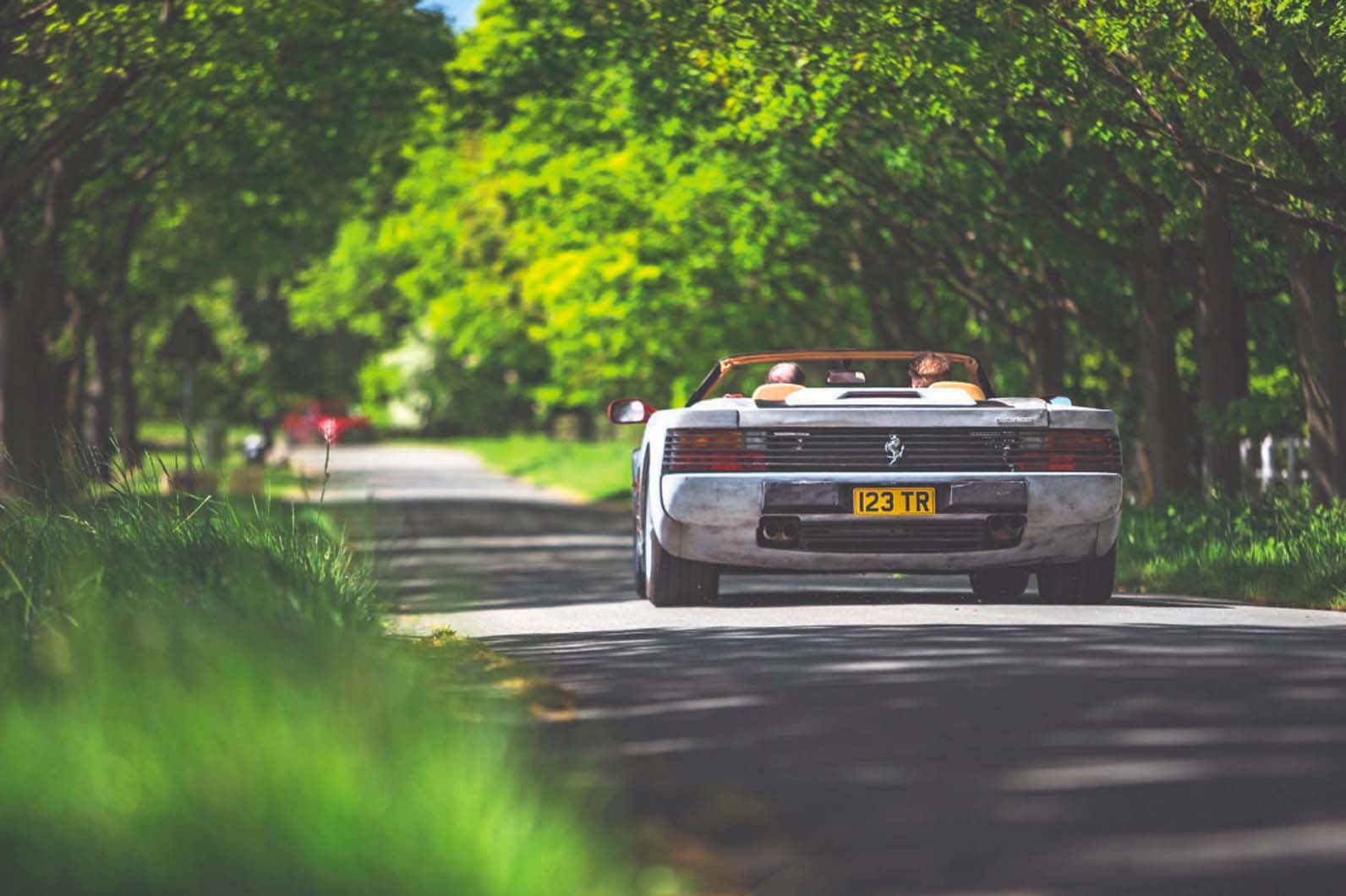 And is that petrol I can smell? “A small leak,” explains my co-pilot.

Whatever its niggles, the Ratarossa is wonderful and unique. The looks of fellow drivers alone tell you that.

This article was first published on 30 June 2018. We're revisiting some of Autocar's most popular features to provide entertaining content during these difficult times.

The one car to drive before you die: Ferrari F40

The greatest Ferraris we’ve ever tested​

Any reason why this article

Any reason why this article has suddenly been reposted 20 months after it was orignally Autocar ?

They are rehashing articles instead of sending journo's out to meet the great unwashed! Autocar doing their bit to prevent infection.  Still think the world has overreacted to a virus that only hits hardest on the weak and vunerable. Before you bite my head off, my wife is an asthmatic with heart problems and therefore VERY vunerable, the rest of you are hoarding, panic-stricken, half-wits who take advice from facebook, enoy your pasta and bog roll!

Any reason why this article has suddenly been reposted 20 months after it was orignally Autocar ?

Putting his foot on the chaps

Putting his foot on the chaps car like that still grates.
TS7 18 March 2020

Putting his foot on the chaps car like that still grates.

As I said before, the bloke with his foot on the bumper IS THE OWNER OF THE CAR!

Putting his foot on the chaps

Putting his foot on the chaps car like that still grates.
View all comments (10)