His appointment puts him at the head of the company, and confirms the role he has been undertaking in addition to his role as chief operating officer since the firm's managing director, Anthony Sheriff, went on leave earlier this year. Despite Flewitt's appointment, McLaren has stressed that Sheriff remains on leave from the company, and has not departed.

Before joining McLaren in 2012, Flewitt was vice-president of manufacturing for Ford of Europe, and corporate officer for Ford Motor Company.  Before joining Ford, he held senior manufacturing and operations roles at TWR Group Limited, AutoNova AB and Rolls-Royce and Bentley Motor Cars Limited.

Ron Dennis, Chairman of McLaren Automotive said:  “Mike has proven to be an automotive professional of the highest calibre and since joining the company one year ago he has contributed significantly to the delivery of the McLaren Automotive vision. The company has already achieved a great deal, including launching three of the world’s most exciting high performance sports cars, establishing a global dealer network and developing the world class McLaren Production Centre.  McLaren Automotive has laid solid foundations for a great future and I am confident that as CEO Mike will play a major role in helping the company to achieve its potential.” 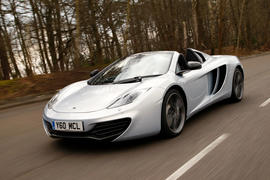