Volkswagen bosses are close to signing off plans for a hot, R-badged version of the forthcoming ID 3 electric hatchback – and Autocar sources suggest the performance machine is set to be launched in 2024.

Volkswagen development chief Frank Welsch said the ID 3 R is “something we’re looking at”. He added: “I like the idea, but we have to decide if the market is ready to accept such a model.”

Welsch said the proposed R model would sit at the top of the ID 3 line-up and could be the only pure performance variant.

Volkswagen’s planned electric-specific performance badge, GTX, won’t be used on the ID 3, because it’s reserved for cars with the twin-motor, four-wheel-drive powertrain. While that will fit in the larger ID 4 SUV, the ID 3 is being launched with a single-motor, rear-wheel-drive set-up only.

“The ID 3 can accept four-wheel drive, although it’s unlikely to receive it during the first generation,” Welsch told Autocar. “There will not be a GTX variant, but we’re yet to decide on a rear-wheel-drive R variant.” Last year, Welsch had said such a car “would need a performance e-motor and four-wheel drive”.

The most powerful of the ID 3 launch models offers 201bhp, although the planned R model is expected to have at least 300bhp. However, the performance necessary for an ID 3 R could be made possible by likely developments in EV technology by 2024.

R chief Jost Capito recently told Autocar it was working with Volkswagen’s motorsport arm to see what technology from the performance batteries used in the ID R could be applied to road cars.

ID 3 to arrive in September despite software issues

The late stages of the ID 3’s development have been badly hit by software issues, but new Volkswagen CEO Ralf Brandstätter confirmed that deliveries will begin in Europe and the UK in early September.

However, the initial limited-edition First models will arrive without a number of software features. These include the augmented reality functions for the car’s head-up display and some of the App Connect features, including Apple CarPlay and Android Auto. 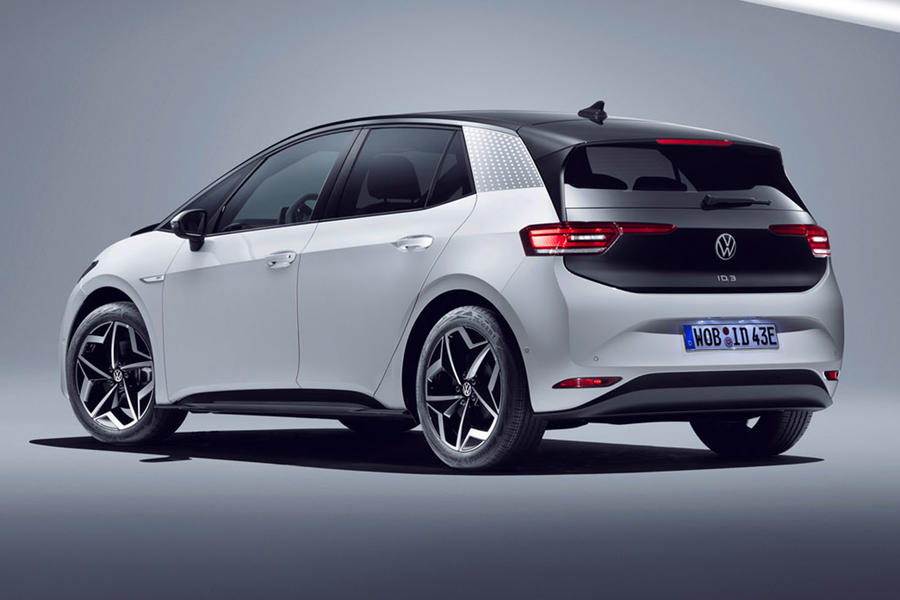 The ID 3 will eventually be sold with three battery capacities and two power outputs. The First edition, which was offered to people who pre-booked a car, will use the mid-sized 58kWh battery for a claimed range of 261 miles. It will have 201bhp, 229lb ft and a 100mph top speed. It can be charged via a 100kW DC connection or a 11kW AC system.

The ID 3 First will feature three trim levels – basic, Plus and Max – although only the mid-level Plus version will be offered in the UK when sales start in mid-July. While the exact UK trim has yet to be confirmed, it’s set to include 19in alloy wheels, tinted rear windows, a rear-view camera and ‘dynamic’ LED lights.

ID 4 SUV to be followed by electric saloon and MPV

Following the ID 3 into UK showrooms will be the larger ID 4 SUV, whose external dimensions will mirror those of the soon-to-be-facelifted second-generation Tiguan, with seating for up to five.

The ID 4 will be revealed in late August before UK deliveries start in the second quarter of 2021. Two versions will be offered: a standard model with an upright tailgate and an emphasis on versatility and a sportier version with a coupé-like profile, potentially using the Cross suffix.

At launch, the ID 4 will be exclusively rear-wheel drive, with a single electric motor offering up to 201bhp and 229lb ft. A more powerful, four-wheel-drive GTX model running two motors with a combined 302bhp and 332lb ft will join the line-up within the first 12 months of sales.

The ID 4 will be sold with a range of batteries up to 83kWh, giving a range of as much as 311 miles. All models will also offer charging at up to 125kW.

Production of the ID 4 is scheduled to take place in Germany, China and the US.

Autocar sources confirm development is already well progressed on production versions of the ID Roomzz, ID Buzz and ID Vizzion concepts, with all three set to make their debuts by the end of 2022.

The production version of the ID Roomzz large SUV, conceived primarily for the Chinese and US markets, will retain the seven-seat layout of the concept. It shares the MEB platform with the short-wheelbase ID Buzz MPV/ van and is likely to be sold exclusively with a twin-motor, four-wheel-drive set-up.

Also under development are commercial vehicle derivatives of the ID Buzz, as previewed by the ID Cargo concept. The production version will offer two wheelbases and battery sizes from 48kWh to 111kWh – the latter claimed to enable a 342-mile range.

Welsch has denied reports that the ID Vizzion saloon will replace the Volkswagen Passat. Similar to that combustion-engined model, it will be sold as both a saloon and an estate and with rear- and four-wheel drive.

Work is also advanced on the ‘ID Entry’ small car, set to be named the ID 1. Positioned as a successor to the Volkswagen e-up, Seat Mii Electric and Skoda Citigo-e iV, it’s due to enter production by 2023.

It was originally planned to have its own low-cost platform and electric drivetrain developed by Seat and the Volkswagen Group’s Chinese partner, JAC Automobile, but development has been taken in-house at Volkswagen now.

Also under development, but yet to be confirmed, is a production version of the secretive ID Ruggdzz. The Land Rover Defender-esque off-roader forms part of what sources call an ‘icon project’ to establish “a line of ID models with the same timeless and classless qualities as the original Beetle”.

Conceived to rival the Mercedes-Benz EQB, it’s said to feature rugged styling cues and a choice of five or seven seats. Sources suggest the range-topping ID Ruggdzz model will have a twin-motor, four-wheel-drive powertrain.

The ID Ruggdzz is expected to enter production in 2023 as part of a 30-strong Volkswagen SUV line-up planned by 2025.

Plans for an electric successor to the Phaeton have gone quiet, but sources in Wolfsburg suggest they haven’t been abandoned. “There remain ideas for a flagship model, although it’s not a priority. Our engineering resources are contracted on volume-selling ID models at the moment,” said one insider.

Meanwhile, plans for German start-up e.Go Mobile to make a road-going version of the ID Buggy have been ditched after the firm filed for bankruptcy. An alternative plan for the two-seater to be made at Volkswagen-owned Karmann is being discussed.

Same old, photoshop, maybe, could be, years away, blah, blah....

What are the vw execs

What are the vw execs thinking. Single motor LR or mid range model 3 had a 0-60 time of sub 5 seconds. These were not expensive models, although they have been replaced by the cheaper single motor model 3 sr+ which does 0-60 in 5.3 seconds. If Tesla could do 0-60 under 5 seconds on one motor 2 years ago, why are vw waiting until 2024? Presumably its what the marketing men or the ICE salesmen want.
fadyady 29 June 2020

If that is the speed of progress at Volkswagen then it might as well diversify into other businesses. Such as selling frankfurters. Or it could specialise in making software cheats. Plenty of experience. Mostly diesel related though.
View all comments (9)