BACK TO ALL NEWS
Currently reading: First drive: Volkswagen ID Buggy concept
UP NEXT
Ferrari 812 Superfast gets special edition with 819bhp V12

Volkswagen is progressing ever faster towards a future of new electric-powered models under its recently created ID sub-brand.

The German company's plan, which is budgeted to cost up to €44 billion, have been meticulously conveyed with the unveiling of a series of six different concept cars over the past four years, the latest of which is the eye-catching ID Buggy - a likeable back-to-basics two-seater inspired by the classic Meyers Manx dune buggy.

The high-riding, battery-powered concept, which does without doors and a fixed roof, was conceived to inject some fun and flippery into the upcoming ID family. It also showcases the impressive modularity and versatility of Volkswagen’s MEB electric car platform, which will make its production debut next month underneath the new ID 3 family hatchback.

However, the ID Buggy is more than just for show. Volkswagen says it is genuinely serious about placing the machine into production as a low-volume addition to the future ID line-up. It has even taken the unusual step of seeking out possible partners capable of handling small-scale production, suggesting it could licence the MEB platform to companies interested in building an electric modern-day recreation of the Manx.

While there’s no official confirmation whether production will happen yet, the good news is that the one and only ID Buggy in existence right now is driveable - albeit at low speeds only.

It attracts plenty of attention as we cruise down 17-Mile Drive outside Monterey in California. It turns heads everywhere it goes, attracting a battery of smartphones as crowds jostle to snap a photograph. 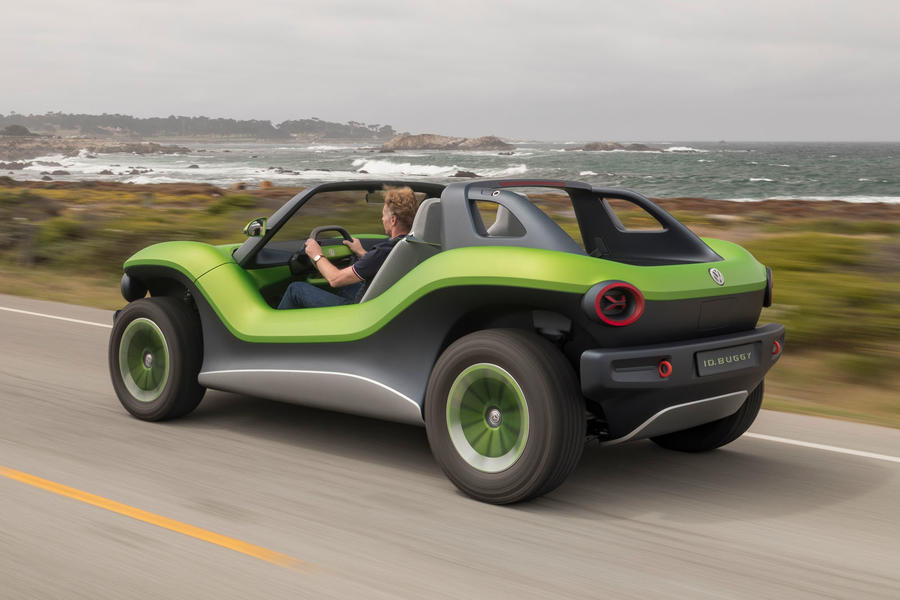 It successfully updates the look of the Manx with a friendly face featuring a low-set bumper and round headlights that contain daytime running lights and pupil-like dipped and main beam projectors.

It’s a look that people can’t help but notice as we scoot by; we even get a thumbs-up from the excited driver of a Lamborghini Aventador who is clearly approving of the retro-inspired lines.

As with the Manx, the unadorned plastic body appears to float above the chassis. The reinforced windscreen is freestanding, without any additional support by a quarter window or the like. Roll-over protection is provided by a sturdy structure behind the two seats.

The rear, meanwhile, mirrors the look of the front, with round tail-lights and a bumper housing tow hooks.

The wheels are 18in in diameter all round and come shod with 255/55-profile front and 285/60-profile BF Goodrich All Terrain tyres. Owing to their generous sidewall profile, they help to increase the ground clearance of the ID Buggy by some 60mm over the ID 3, upon which it's largely based.

Protection from the elements is provided by a composite fabric roof. This is designed to fasten to the windscreen header rail and clips that are integrated into the roll-over structure.

Power comes from a rear-mounted electric motor developing 202bhp and 228lb ft of torque. It provides drive exclusively to the rear wheels, with an electronic differential providing a torque-vectoring effect for optimal traction. As with other ID models already signed off for production, though, Volkswagen says a second electric motor could be packaged up front to provide four-wheel drive should buyers request it. 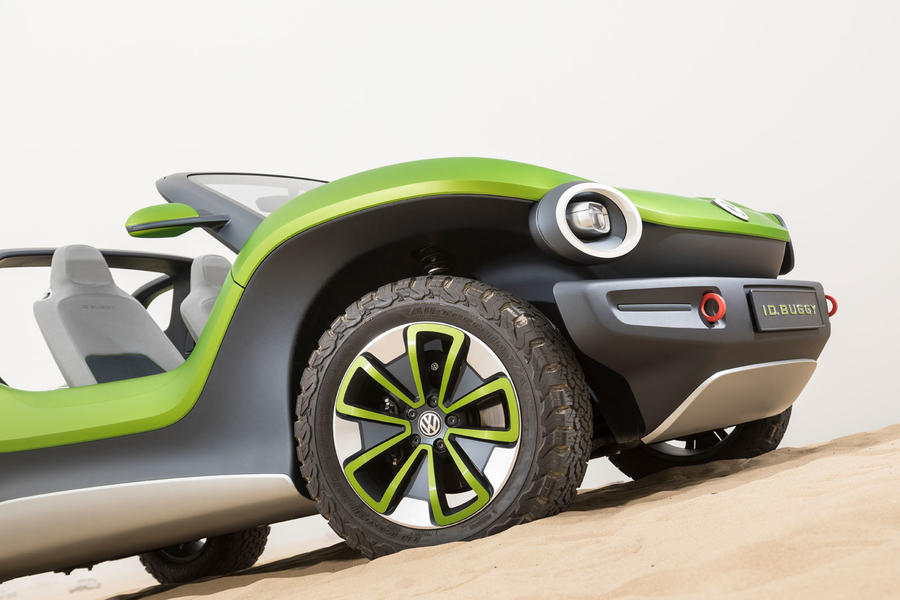 As is typical for a concept, there's no official weight figure. However, Volkswagen quotes a time of 0-62mph 7.2sec and a top speed of 100mph. Energy is provided by a 62kWh battery, giving a range that Volkswagen puts at “around 155 miles” on the WLTP test cycle.

With a charging capacity of 100kW, it also claims the battery of its latest concept can be charged from empty to 80% within half an hour. As with the exterior, the rear-wheel drive layout also echoes the design of the Manx.

Our first drive of the ID Buggy was limited to brief run on public roads outside Monterey, where the Pebble Beach Concours takes place each year. Not exactly the ideal conditions to display its true sand-blasting ability, admits Volkswagen. But even with a top speed limited to just 18.6mph, it was enough to reveal that the sixth member of the ID concept family is terrifically well built and sound enough in terms of design to consider for production.

The biggest hurdle to driving the ID Buggy is getting into it. After testing a number of different variations, it seems easiest to simply sit on the high-mounted side structure before swinging your legs inside and plonking your backside on the driver’s seat. Once positioned, you’re confronted by a hexagonal steering wheel. Behind it sits a small digital display exclusively for the instruments and the controls; a rotary dial on the left works the indicators while a similar control on the right is used to select drive and engage the handbrake.

The minimalist interior makes extensive use of durable materials, including waterproof upholstery for the seats, cast aluminium pedals and a largely flat plastic floor. It’s all very basic by modern-day standards. Without an infotainment system of any kind, the only real nod to luxury is a Bluetooth speaker positioned between the seats, which can be used to play music via a smartphone. Luggage can be stowed in a covered well at the rear. Otherwise, the focus is very much on pure and simple driving fun. 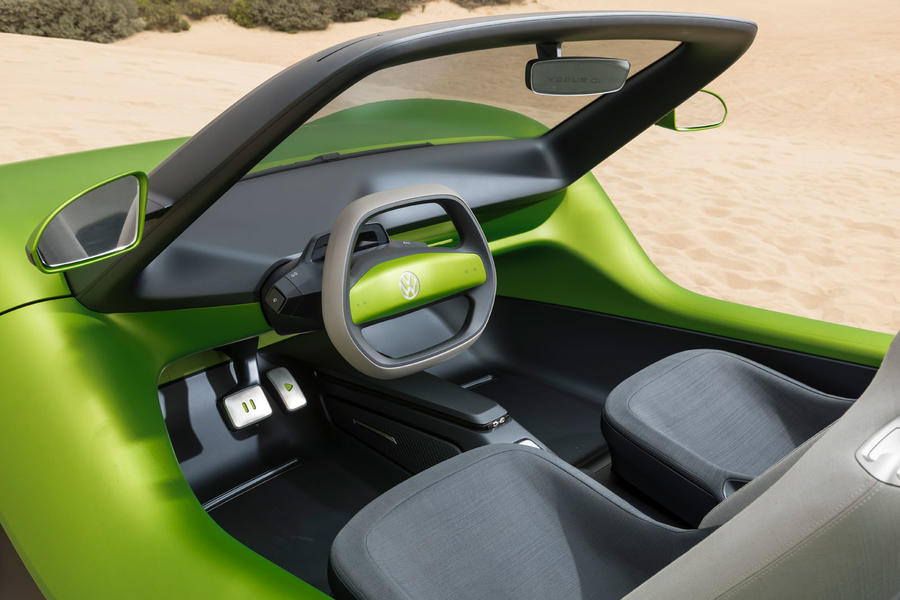 A twist of the right-hand side controller and a press of the accelerator gets the ID Buggy underway with a heady burst of acceleration. Without any sound generator to indicate its operation to other road users, progress is silent from step-off. Performance is instant, thanks to the heady slug of torque sent to the rear wheels, so the increase in speed is almost immediately stemmed by the limiter.

Looking out over the front fenders while the wind licks through your hair, you’re reminded very much of the Manx. Like the original, this new age dune buggy isn't only unusual to look but, thanks to its minimalistic design, also delivers a unique set of driving traits. It's the sheer simplicity of the thing that really stands out.

The inherent characteristics of the Volkswagen-developed driveline satisfy the requirements of an off-road buggy quite well. This isn't a class of car that's typically driven long distances, and even less so on highways. In this respect, its battery appears well matched to how potential buyers might use it, giving it sufficient range without ladening it with unnecessary weight.

The steering, also borrowed from the ID 3, is very light and terrifically responsive, despite concerns that the off-road tyres, with their tall aspect ratio and generous tread depth, could reduce feel and sharpness. In combination with springs providing 100mm of travel under compression and 90mm in rebound all round, they ensure a surprisingly smooth and compliant ride. Another endearing aspect of the ID Buggy is its relatively small turning circle - something that makes manoeuvring it around the car park an absolute breeze.

It would be unfair to draw any definitive conclusions about the dynamic attributes. However, it's clear that the ID Buggy doesn’t just resurrect the spirit of the original Manx but also showcases the outstanding variability of Volkswagen’s MEB platform in a very convincing way. By providing its dedicated electric car structure with truly modular properties, the firm has been able to use it for an astonishingly wide range of different models. 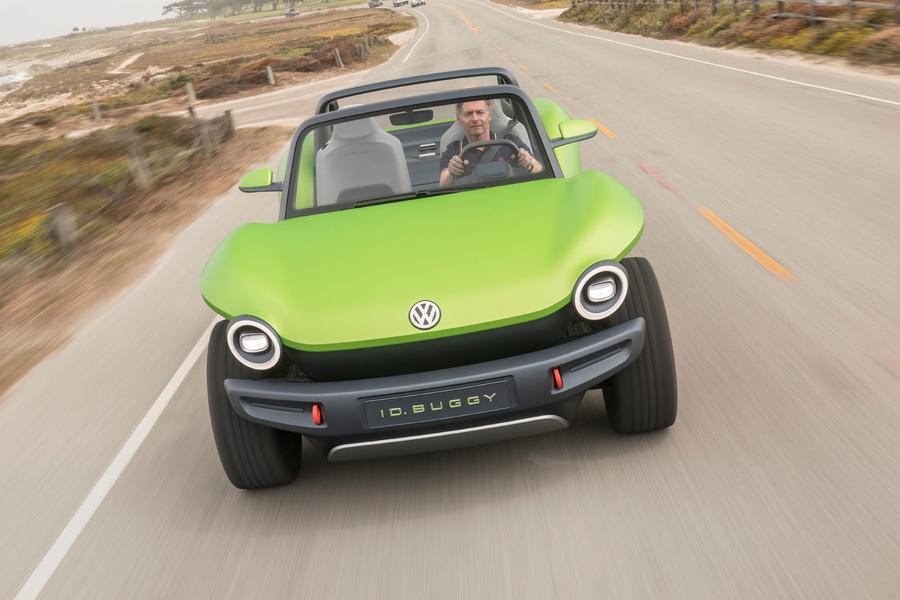 Will the ID Buggy ever reach production?

Happily, it seems likely. Nothing is official just yet, but Volkswagen admits it's actively seeking partners to build the machine. Interestingly, all the talk about its future has been quite positive up to now, so there’s no reason to believe it won’t eventually get made.

One company widely tipped to partner with Volkswagen to build the back-to-basics electric car is German company e.Go. Having already obtained a licence for production of the MEB platform for its own models, the Aachen-based start-up already appears to have a head start on rivals seeking to grab a slice of the ID Buggy business.

Speaking at the concept's unveiling at the Geneva motor show back in March, Volkswagen’s sales and marketing boss Jürgen Stackmann confirmed the ID Buggy was “feasible as you see it” for production. “It’s not a show car, it’s pre-designed for readiness,” he said.

That said, don’t expect it to appear on UK roads any time soon. Volkswagen already has its hands full gearing up for the introduction of its first dedicated electric car, the ID 3. Supplying components to an outside company for what is, in essence, a low-volume proposition at best isn't exactly at the top of its priority list at the moment.

Still, the ID Buggy should be taken seriously. Volkswagen knows it is on to something with a modern-day resurrection of the Manx, and all indications are that it's already well down the road in negotiations to ensure it reaches production of one kind or the other.

Why Volkswagen wants firms to produce their own electric buggies

This concept is lovely, but how cool would it be to see a traditional “light weight” sports car body on this platform. OK, so it would be a bit heftier than an MX5, but still a lot of fun.

no sound = no fun

Not having the sound of the exhaust is akin to sex w/out a female - what's the point?

If they can make sense of the numbers it seems like a no brainer.

Don't see why it wouldn't be feasible. If they market it right and supply all the add-ons and customisable stuff it could become the next Campervan.

Also, it would be awesome to see them selling the platform out and small-scale manufacturers creating their own vehicles. Would be a real opening for the British car industry