BACK TO ALL NEWS
Currently reading: New Seat Mii Electric priced from £19,300 in UK
UP NEXT
James Ruppert: cars to make your fuel go further

Renault Zoe rival offers 162 miles of range, and is one of the most affordable EVs currently on sale
Share
Open gallery
Close
Share story

Seat has announced that UK pricing for the Mii Electric, its first zero-emissions model, will begin at £19,300, making it one of the cheapest mainstream EVs available in the UK.

The supermini's sub-£20,000 price tag is lower than that of its Vauxhall Corsa-e, Peugeot e-208, Mini Electric and Honda E rivals. The new Renault Zoe is available from £18,670 under the firm's battery leasing scheme, but monthly costs have yet to be revealed.

As part of Seat's 'easyMOVE' range simplification strategy, only one trim is available from launch. 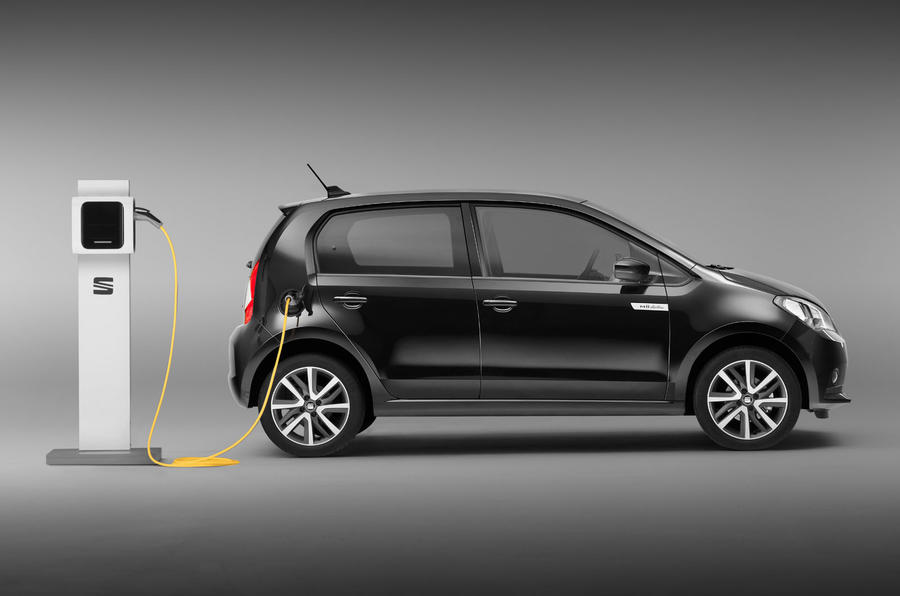 Owners can also make use of an associated smartphone app, which allows the climate control, lights and locks to be activated remotely, and gives information on journey times and the car's location.

The Mii Electric shares its drivetrain with the recently revealed Skoda Citigo-e iV and replaces the petrol-engined Mii, which went out of production in July.

With an 82bhp electric motor mated to a single-speed transmission, the Mii Electric produces 156lb ft torque, enabling it to accelerate from 0-31mph in 3.9sec and on to a limited top speed of 81mph.

A 36.8kWh battery pack gives a WLTP-certified range of 162 miles. That's two miles fewer than the 164 offered by the Citigo-e iV but 79 more than the ageing Volkswagen e-Up.

Styling changes over the outgoing Mii are subtle, limited to 16in alloy wheels and the addition of illuminated badging to the back and sides. Unlike the Citigo-e iV, the Mii retains the mesh grille fitted to the petrol car.

Inside, the Mii Electric sports a redesigned dashboard, heated, 'performance-inspired' seats and a leather steering wheel, handbrake and gear selector. Boot space is unchanged, at 251 litres. 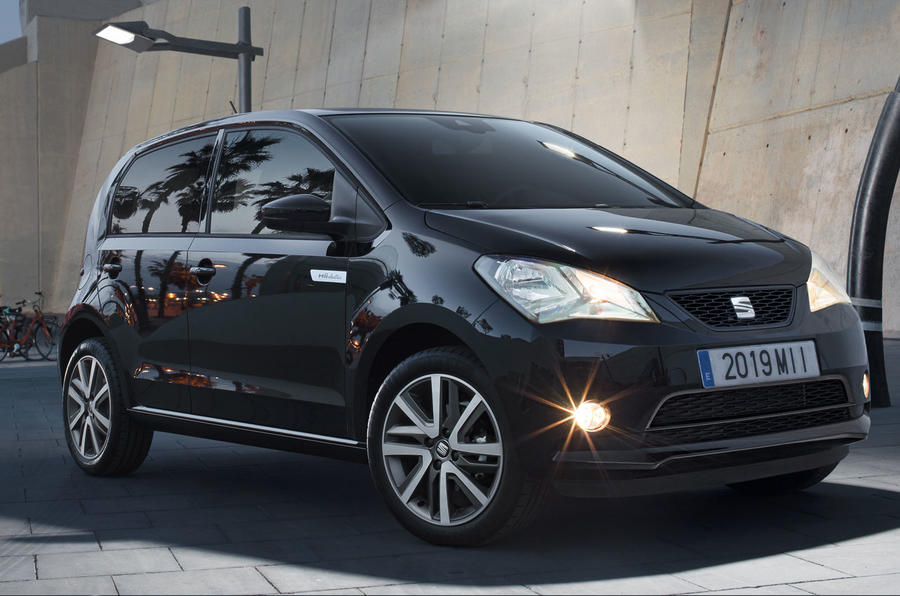 The Mii Electric is aimed squarely at “those who spend the majority of their time traversing metropolitan and suburban streets”, says Seat. It can be charged in around four hours to 80% capacity from a 7.2kW home wallbox or one hour from a 40kW public fast charger.

Seat said the Mii’s shift to electric power will help prepare its dealerships for the arrival of the El-Born in 2020.

Company president Luca de Meo said: “In Europe, the electric vehicle market grew by 46% in the first four months of the year. Moving forward, we expect electrified vehicles to play an important role within our range.

“The Mii Electric is the start of that journey and at the same time brings to the market an affordable electric car.” 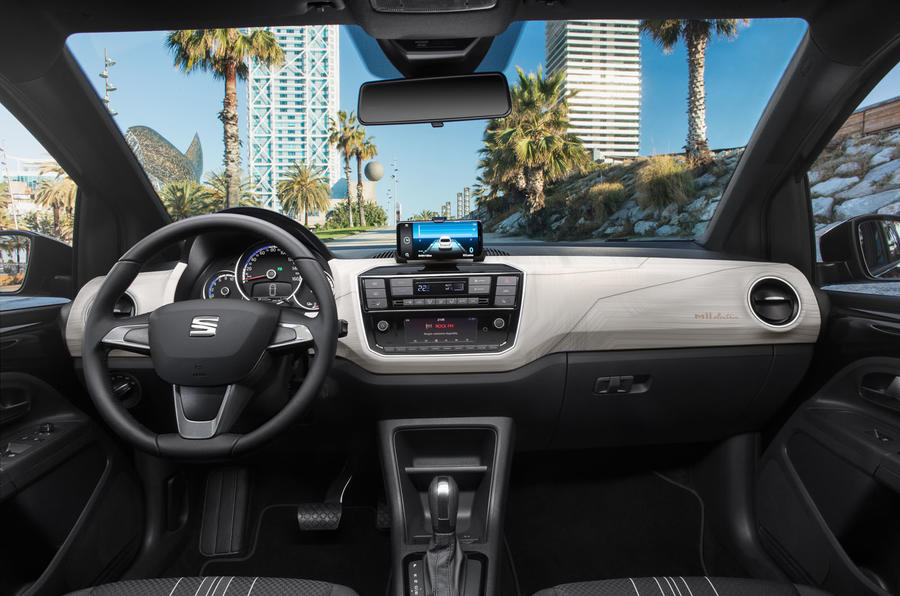 The Mii Electric is the production version of the 2017 e-Mii concept, of which five examples have been used in a car-sharing trial scheme in Barcelona, Spain, as part of the new car's development programme.

Production of the Mii Electric will begin at Skoda's plant in Bratislava, Slovakia, later this year, with customer deliveries scheduled to begin in early 2020.

The launch of the Mii Electric comes as Seat gears up to introduce the El-Born EV, a plug-in hybrid variant of the next Leon and the plug-in hybrid Cupra Formentor sports SUV.

Let me get this straight. We are being told that a car that costs 20 grand and can only do a return trip of 80 miles, and also costs somewhere around £8 to charge (i.e. 5p a mile) plus however much SEAT charges for leasing the battery, is a good deal. It is better than driving for instance my immaculate and totally reliable Mazda2, that cost a grand to buy and does an easy 50 mpg? WTF have the politicians who want to peddle this bullshit been smoking? And more to the point, what do they think we've been smoking?
Cenuijmu 26 October 2019

Thanks for the chuckle on a Saturday morning

I did enjoy the combative posts above.  Thanks chaps! Shame Hilton Holloway could not join in for his traditional ear bashing by the Autocar nutters also  hee hee.

I like the Honda E by the way, people are allowed to buy items that are cool and do not just look at a spreadsheet.

I like this car too apart from the price....  you can buy an awful lot of petrol miles for a cheaper similar sized car currently.  When prce comes down then small electric cars will be great. WIll my diesel last that long though  :(

What happened to the £16,000 that was being quoted for this car just a few weeks ago? That's now jumped to almost £20K! For a tiny city car!

And it's not entirely fair comparing this cramped, compromised city car to bigger cars within the article (Corsa-e / Peugeot e-208).

I still can't see electric cars catching on in the way politicians seem to want them too when they are so ridiculously expensive and make no financial sense whatsoever - even taking running costs into consideration. And I don't like the way car manufacturers are dramamtically and regularly increasing prices of their ICE cars to somehow close that price gap artificially, instead of lowering the asking price of EVs.

Even having an environmental conscience isn't enough reason to buy one of these overpriced white elephants (once battery technology improves they could become obsolete if the engineers haven't future proofed them to accept more advanced power sources) - because an electric car still polutes the environment with tyre wear, brake linings, manufacturing processes, generation of the power to charge them and the effects of traffic congestion (i.e. they will still cause traffic jams that include ICE vehicles).

What happened to the £16,000 that was being quoted for this car just a few weeks ago? That's now jumped to almost £20K! For a tiny city car!

And it's not entirely fair comparing this cramped, compromised city car to bigger cars within the article (Corsa-e / Peugeot e-208).

I still can't see electric cars catching on in the way politicians seem to want them too when they are so ridiculously expensive and make no financial sense whatsoever - even taking running costs into consideration. And I don't like the way car manufacturers are dramamtically and regularly increasing prices of their ICE cars to somehow close that price gap artificially, instead of lowering the asking price of EVs.

Even having an environmental conscience isn't enough reason to buy one of these overpriced white elephants (once battery technology improves they could become obsolete if the engineers haven't future proofed them to accept more advanced power sources) - because an electric car still polutes the environment with tyre wear, brake linings, manufacturing processes, generation of the power to charge them and the effects of traffic congestion (i.e. they will still cause traffic jams that include ICE vehicles).

Somewhat agree when you say compared to cars in class above, but you obviously have some sort of chip on your shoulder. Prices of all cars have risen significantly. The list for a high pec up is around £12500 ( bought from stock, they no longer make them ). I'm guessing if you wanted an auto version ( which you can't buy ) that'd add another £1200 - say £14,000 in total.  I agree the economics of EV's don't make sense to many but if your keeping the car for say 5-6 years then this thing should easily return the outlay on fuel savings alone. But that's not the point...  the point is EV's are attracting other benefits example -  many towns considering / already have free parking for EV's. Personally I don't think £20k is outragous at all.

Your arguement re: reducing congestion is true but that's not the point of an EV. You say they produce polution via production, tyre wear, brake linings etc. What sort of an argument is that? If that's the case then my bicycle produces pollution!

I've yet to be convinced by EV's, I think technology has a long way to go before they become the norm ( if they ever do become the norm ), but it's only the Donald Trumps of this world who could argue they provide no environmental benefit.

Scotty5’s aggressive comment seems more in line with the kind of behaviour Mr Trump is often accused of than me. And where did I say in my comment that electric cars have no environmental benefit? They just aren’t the holy grail of pollution-free transport some people think they are.

Saying I have a chip on my shoulder for not wanting car manufacturers to charge a fortune for electric cars or regularly raise their prices by huge amounts for all their cars is a bit like saying I should congratulate someone for trying to mug me (I’m talking about ICE and electric car pricing, but electric cars remain much more expensive than ICE cars). I also want an electric car, but it doesn’t make financial sense for me to buy one by a long shot.

With regard to the huge price gap between and ICE and an equivalent electric car - my current ICE car, all running costs considered, will cost me around £5500 to run over 5 years, not including depreciation. A much more expensive to buy electric car will be cheaper to charge than what petrol costs, and have no annual road fund licence (that will probably change over time), but will still cost something to charge, insure and service, not to mention the horrendous depreciation electric cars suffer when compared to a similar ICE car (because electric cars cost so much more when new and the second hand market is concerned about their longevity). My ICE car will also be as economical as it was when new, if not more so, after 5 years (in my experience with other ICE cars) whereas an electric car will lose range over time.

So the statement that the price gap between an ICE and electric version of a car will be recovered over 5 years doesn’t apply for me by a long way – an electric car could end up costing more to run thanks to depreciation (and things like free parking for electric cars, if that actually exists,  and congestion charge avoidance don’t apply for where I live – and the government and councils will stop those benefits when more people switch to electric cars anyway).

Also, do you really think a bicycle pollutes as much as a car in terms of brake linings and tyre wear? Not to mention manufacturing of batteries etc……

In addition, my point about electric cars contributing towards ICE pollution through congestion still stands. A traffic jam in the not-too-distant future will consist of both electric and ICE vehicles, thus increasing the emissions of those ICE vehicles stuck in that same jam - and it's going to be a lot longer for vehicles like lorries to go fully electric than cars so they will be around long after the majority of people switch to electric cars.

There’s also a number of other downfalls of electric cars that should be considered when paying such a high premium over an ICE car – such as additional hassle with accident recovery due to safety concerns surrounding damaged electric cars (even in a minor collision).

All that said, I'd love a manufacturer to produce an electric car that would make an economically viable case for me to buy one so that I could get closer to a less environmentally damaging form of transport than an ICE car but that isn't today or in the near future judging by what’s currently on sale and this very expensive, tiny, electric Seat Mii.