BACK TO ALL NEWS
Currently reading: Volkswagen ID 3: vital EV revealed with up to 341-mile range
UP NEXT
New 2022 BMW 3 Series brings redesign and tech upgrades

Volkswagen ID 3: vital EV revealed with up to 341-mile range

The electric Volkswagen ID 3, the brand’s most important model since the Golf, has been revealed at the Frankfurt motor show, offering up to 341 miles of range and priced from around £27,500.

Initially shown as a concept at the 2016 Paris motor show, the hatchback will be the first ID model to arrive on roads next summer, followed shortly after by the production version of the ID Crozz SUV.

Other members of the upcoming all-electric ID family already seen in concept form include the Buzz, Vizzion and Roomzz, all of which will contribute to the VW Group’s intention to sell three million EVs by 2025.

We've driven a prototype, read what we learned here 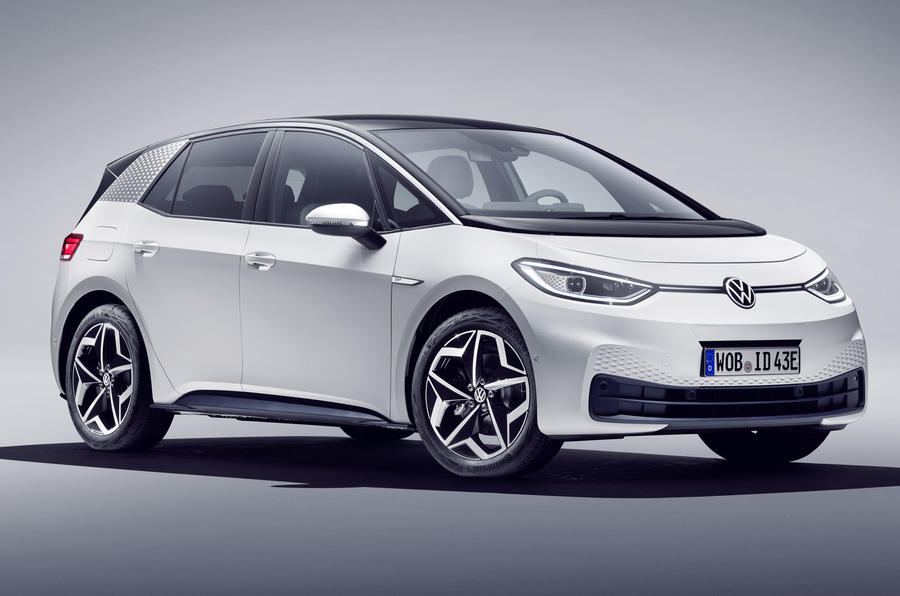 Described as “an electric car for everyone”, the ID 3’s importance for VW is spelled out by its explanation of the model’s name. The marque says the ‘3’ signifies “the third major chapter for the brand after the Beetle and Golf”, both broadly considered to be landmark cars for VW and the wider motoring industry.

The ID 3 is the first car to use the maker’s new MEB platform, a scalable architecture built solely for electric vehicles, which will underpin all ID models and be used by other VW Group brands. VW is also licensing the platform’s use to other firms, most notably major rival Ford – a move considered crucial in helping to recoup the vast costs of developing the chassis and lower prices through greater economies of scale.

One major benefit of a bespoke electric platform is interior space. While the ID 3 is only 3mm longer, 10mm wider and 60mm taller than the current Golf, its wheelbase is 145mm longer at 2765mm, just 21mm shy of a Passat saloon’s. Boot space is identical to the Golf at 380 litres. 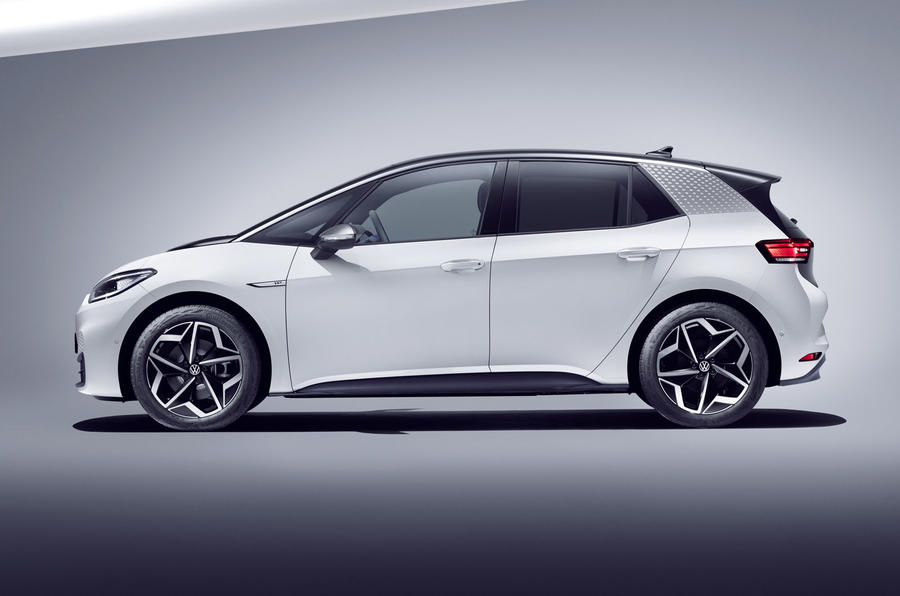 VW design boss Klaus Bischoff said: “The car has unique proportions due to the under-floor battery. With the drive axle at the back, we can have a long wheelbase and short overhangs, with 710mm wheel dimensions – the same as the ID show car.

“We kept the bodystyle from the concept, and the surfaces are very similar to the show car. We’ve kept it simple and only used a few clear lines.”

At the rear, there is a large spoiler, required for aerodynamic efficiency. The black roof and rear section made of glossy black plastic seen in these pictures will be standard across all ID 3s.

VW claims the rear-wheel-drive ID 3 will have “intuitive handling” and “phenomenal performance”, the latter thanks to the even weight distribution of the MEB set-up, according to the maker. Early signs are promising: in a recent camouflaged drive of the ID 3, Autocar said the car has the “measured, natural responsiveness in everything it does that so often marks out a VW, and that makes for such easy, top-level drivability”. 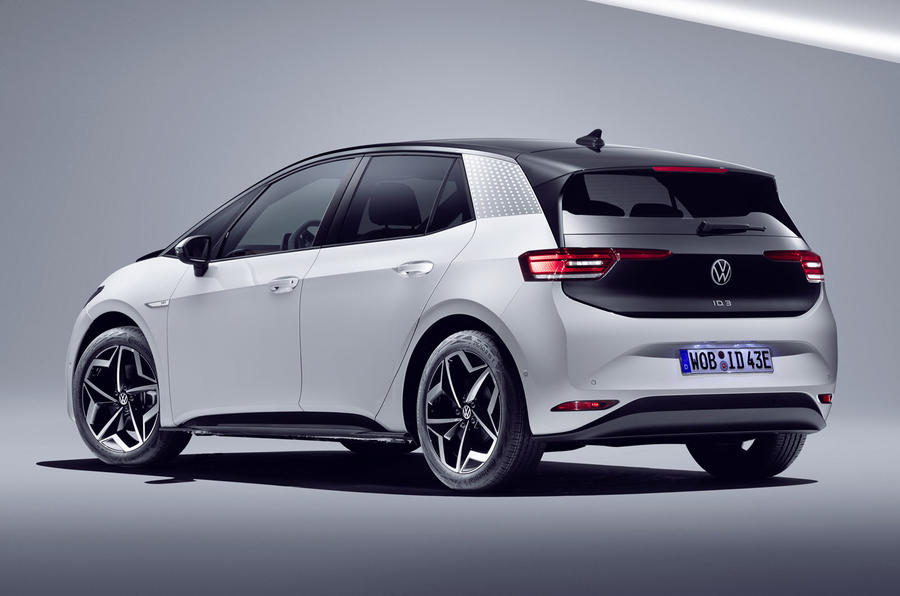 The ID 3 will be offered in three battery sizes with two power outputs from its rear-mounted electric motor: a 45kWh battery with claimed range of 205 miles and 148bhp, and 58kWh and 77kWh batteries both with 201bhp, delivering 260 and 341 miles of range respectively.

Full specifications have yet to be revealed but all variants will deliver 229lb ft of torque, while the entry- and mid-level ID 3s will have a top speed of 99mph.

A charging capacity of 100kW will be available on the mid-range ID 3, with a promised charging time of 30 minutes for 155 miles of range. The smaller-battery ID 3 will offer 50kW, but with an optional 100kW. The top-range ID 3 will be capable of charging at 125kW. 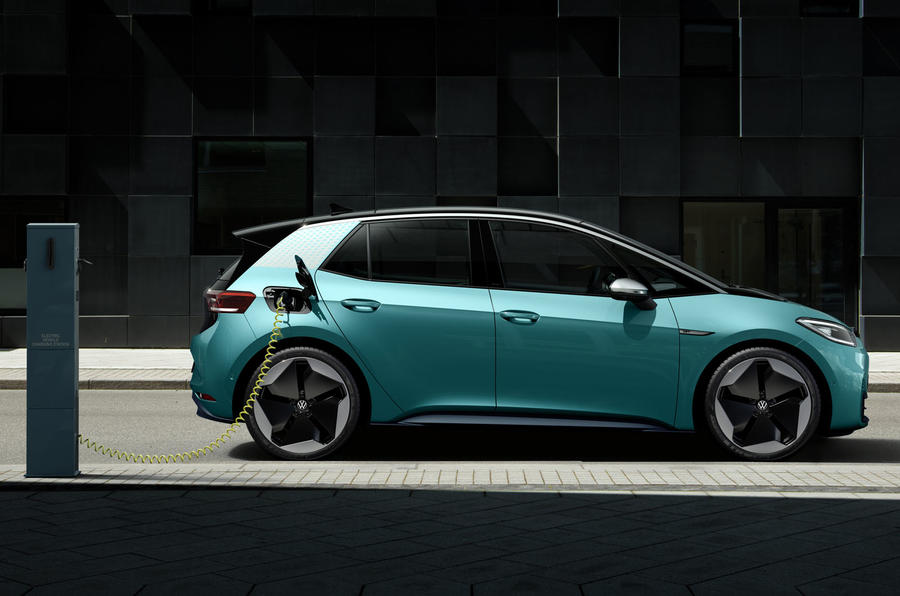 VW is guaranteeing the battery for eight years or 160,000km.

The interior is pared back compared with today’s VW models. Bischoff said: “We’ve also made an internal revolution, with a new design that’s extra-simple and clear. We’ve added value by increasing the amount of space, making it airy and open.”

The dashboard is clear other than a 10in protruding central screen as standard, on which systems such as navigation will receive over-the-air updates. 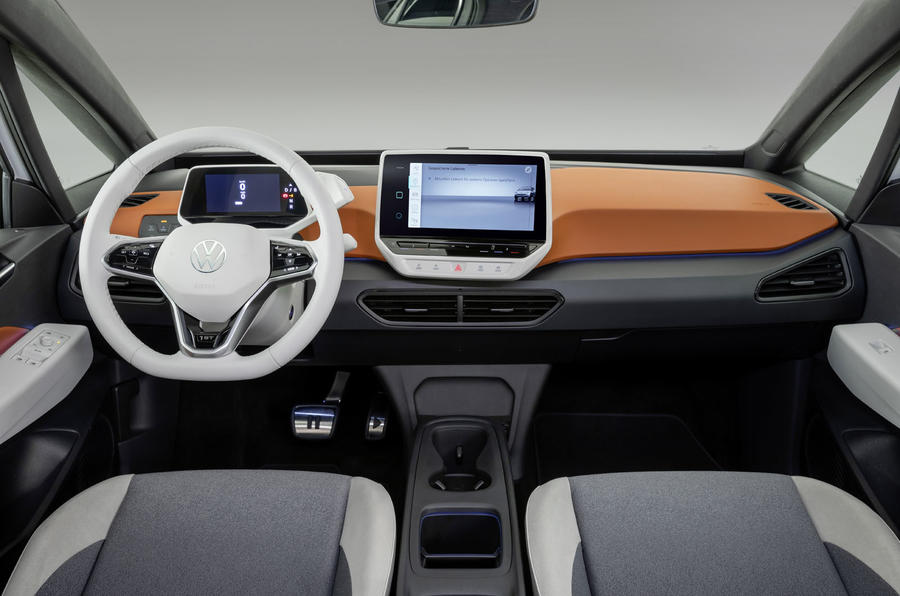 There is an optional augmented reality head-up display, which projects relevant information onto the windscreen. All controls – including those on the electrically adjustable multifunction steering wheel – are operated using touch-sensitive buttons. The only conventional buttons are for electric windows and hazard warning lights.

VW promises next-generation ‘natural’ voice control on the ID 3. For example, an occupant could say “Hello ID, I’m cold” and, in response, the system would increase the in-car temperature.

There will not be traditional VW trim levels, given the maker’s desire to keep the line-up as simple as possible. This is presumably an attempt not to complicate matters for customers, many of whom will be buying an electric car for the first time. However, four option packs are expected to be offered for the UK market. 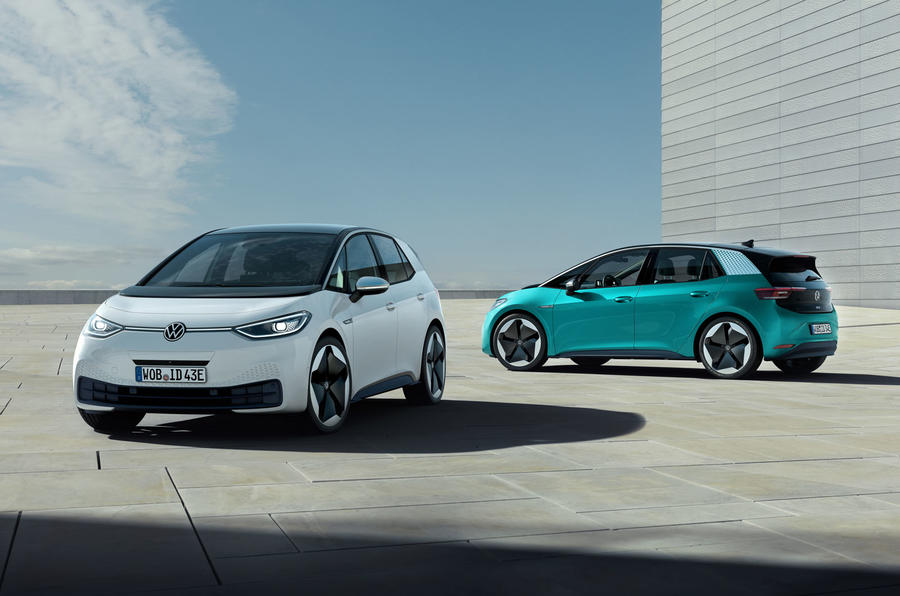 The ID 3 will launch with the 1st edition, powered by a mid-range 58kWh battery. The allocation, unspecified by VW, has already been filled in the UK. VW did say it had achieved its target of 35,000 pre-orders worldwide. The standard ID 3 order books will open next year, with deliveries in autumn.

The ID 3 is the first carbon-neutral model made by VW, according to the maker. It said all elements of manufacture and distribution will be powered by renewable sources or compensated by certified climate projects. The model will be produced at VW’s Zwickau plant in Germany, which is set to produce 330,000 electric cars annually from 2021. 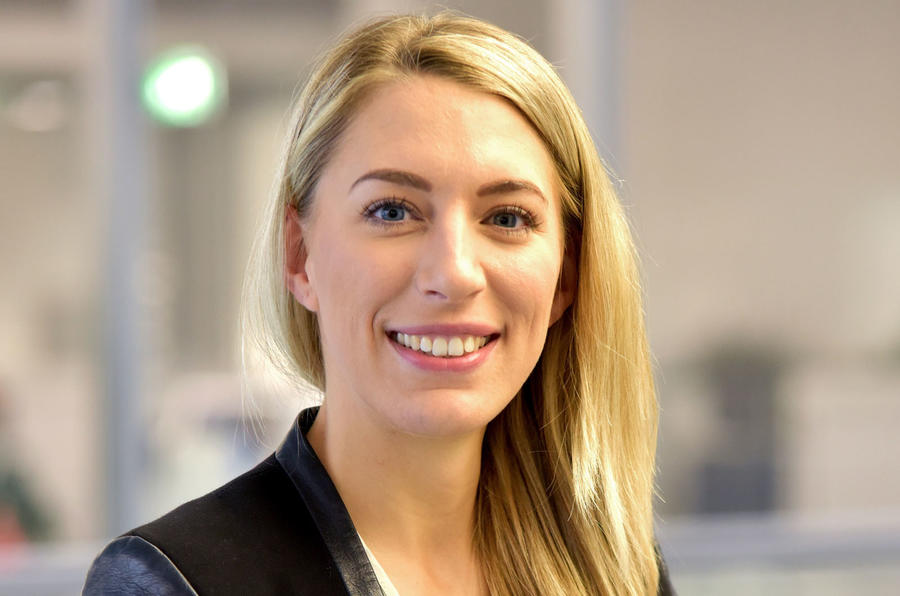 Could VW increase or decrease the range offered by these three batteries?

“I [personally] only need 60km of range today. We will have to see how the market reacts. We predict the middle battery size will be the most popular.”

“We are definitely thinking about this. We won’t have the same line-up as Golf. We are trying to keep it simple. But obviously we are thinking of performance versions of ID cars, especially in higher ID models where you get four-wheel drive – that would be a lot of fun.”

When do you expect there be volume parity with the Golf?

“The Golf is still at the fore of the brand. ID 3 is the little brother able to go out and explore and be the cooler [sibling]! I can’t say when it will reach parity.” 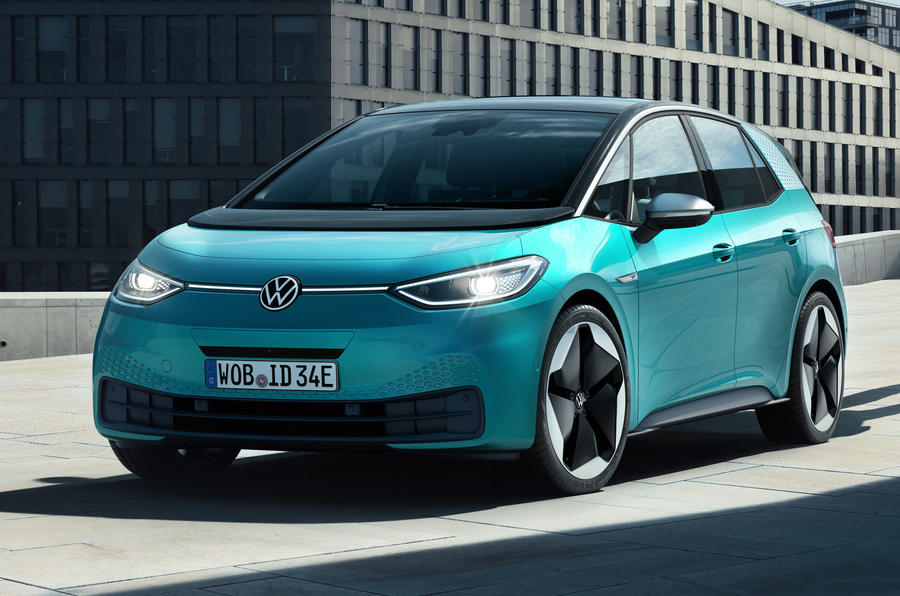 When will VW introduce wireless charging for its EVs?

“Not on this ID 3, but we are looking at much less than 10 years. VW is not a premium brand. The preparation [for wireless charging] in a garage is very expensive today. This might be why premium brands are further along the line [than us] but we are talking about it.”

What is that bulky black

What is that bulky black panel in front of the winscreen? Is it a large cushion for pedestrians to land on?

I'm sure this vehicle will appeal to many, but I don't find it very desirable: Its pretty bland in the looks department, and the interior looks an ergonomic nightmare.

This is an example of the amazing technology in the automotive world. I'd really love to own one but alas they are like all new Ev's they are too expensive. The difference in cost between them and current ICE's will certainly buy a lot of carbon fuel.

Puzzled why the cyan one looks really sharp, whereas the white example further down the page looks a bit dull! I think it's very colour sensisive...