Van's 341-mile range is the largest in the ID family, thanks to a larger battery pack; full autonomy is claimed
Share
Open gallery
Close
Share story

The ID family of EVs is set to expand into the world of commercial vehicles with the Buzz Cargo, which based on the ID Buzz microbus concept.

The ID Buzz Cargo has the longest range of any of the ID family, at 341 miles, with a larger battery pack providing the extra. A roof-mounted solar panel can also provide an extra nine miles of range.

Volkswagen’s ID Pilot fully autonomous driving system features on the concept, allowing the driver to take their eyes and mind off the road completely. The driver pushes the steering wheel for several seconds to initiate the system, after which their seat can pivot to allow better access to the other interior features.

Although not confirmed for production, the ID Buzz Cargo is being considered to hit the roads in 2021 - a year before the regular ID Buzz.

It wouldn't be the only electric van in the Volkswagen line-up, though, as the brand recently launched the e-Crafter. That van has the same 35kWh lithium ion battery as the e-Golf, with a 107-mile range. The ID Buzz Cargo is smaller, though, at around the same size as today’s Transporter.

Volkswagen says the ID Buzz Cargo can take a maximum load of 800kg, with extra interior space over the ID Buzz due to its rear overhang being extended by 106mm. The concept's overall measurements are 5048mm long, 1976mm wide and 1963mm tall, with a wheelbase of 3300mm. The two versions of the ID Buzz were developed together, but the ID Buzz Cargo has a redesigned rear bumper in addition to the extra length.

The ID Buzz Cargo has a top speed limited to 99mph; its motors deliver a combined 198bhp to all four wheels. Other performance figures haven’t been released, but it takes as little as 15 minutes to charge the smaller 48kWh battery from a 150kW fast charger, while the 111kWh pack takes half an hour to reach the same state of charge.

The ID Buzz’s 22in wheels have been shrunk to 20in for the Cargo version, too.

Inside, there are three seats instead of two, although the middle seat folds down into an in-built workstation with an integrated laptop, which can be used on the go when ID Pilot is activated.

Rather than traditional instrument dials, the ID Buzz Cargo employs augmented reality on the windscreen to deliver information to the driver, while other functions can be accessed via a touchpad in the centre of the steering wheel or a central infotainment tablet (which is removable).

The ID Buzz Cargo’s introduction takes the number of MEB platform-based ID cars to five, the others being the passenger-carrying ID Buzz, ID Vizzion, ID hatchback and ID Crozz SUV. 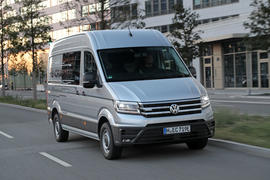 Is the Volkswagen ID a game-changer?

Looks great and I’d love a

Looks great and I’d love a buzz, but I wish Autocar would stop reporting VWs ID as though they’re real, production models, not the PR fuelled concepts that they are at this stage.

Statements such as ‘the Buzz Cargo has the longest range of any of the ID family’ give a false impression. Until a production model is released and in production surely the future tense should be used to avoid risk of the ID concepts being compared with actual models that other manufacturers have on sale right now.

It looks too big for a

It looks too big for a plumber, and too small for a builder.

this article is popular with Eggers