BACK TO ALL NEWS
Currently reading: Goodwood with snow: Inside Porsche's bonkers GP Ice Race
UP NEXT
Rodin FZero: V10 weapon aims to be world's fastest car

The sight of a near-silent electric Formula E car on the move is no longer a novelty, but watching Daniel Abt’s Audi E-tron FE06 in action was certainly surreal on this occasion.

For one thing, the single-seater wasn’t on a race circuit but a snowbank-lined ice course on a frozen airfield. And it was fitted with studded ice tyres. Oh, and there was a tow rope trailing from its diffuser, at the end of which a skier was hanging on as best he could. And yet that probably wasn’t the weirdest sight you could find in the vicinity of that ice track.

Try a 2012 Dakar Rally-winning Mini All4 Racing slithering on ice. Or a Porsche Taycan lapping a circuit at the same time as a historic Porsche 911 with, for reasons still unclear, a surfboard on its roof rack. A lightly modified Bentley Continental GT practising doughnuts. And Hans-Joachim Stuck reunited with the chassis in which he made his grand prix debut, now fitted with six – yes, six – studded tyres. 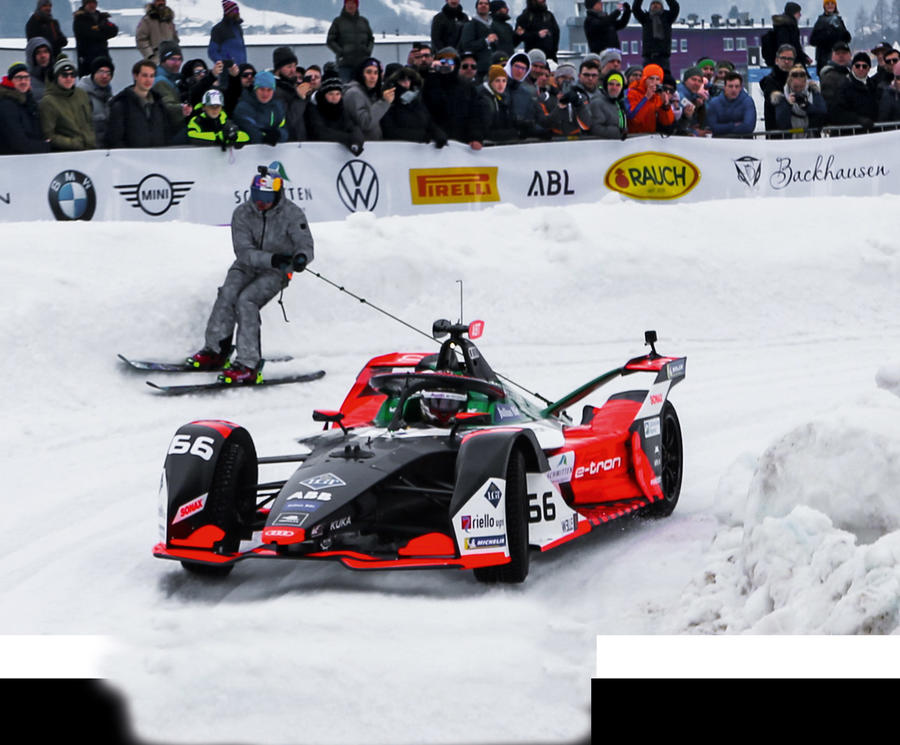 Welcome to the bonkers world of the GP Ice Race. You might not have heard of it yet but, after just two years, it seems poised to grow into a showcase event on the motorsport calendar: an Alpine Festival of Speed, perhaps.

Like Goodwood, the GP Ice Race is built on a long motorsport tradition. It’s centred on the bizarre discipline of skijoring, in which skiers are towed by cars. The first skijoring event in Zell am See, Austria, was held in 1937 on a frozen lake, with skiers towed by bikes. The first Dr Porsche Memorial Skijoring Race took place in 1952, before standard car races were added the next year. It became an annual tradition, although it moved from the lake to the town’s airfield in 1969 after several weather-related cancellations. But after the 1974 running was cancelled at late notice, it fell off the calendar.

The revived event features timed runs, competitive races and, brilliantly, skijoring – but it’s mostly just an excuse to gather an amazing collection of historic and modern cars for a slippy, slidy motorsport party.

The GP Ice Race even has its own equivalent of the Duke of Richmond: co-organiser Ferdinand Porsche, great-grandson of that Ferdinand Porsche. He says he decided to bring the event “back from obscurity” both to meet the growing demand for historic events and because “motorsport belongs to Zell am See”. 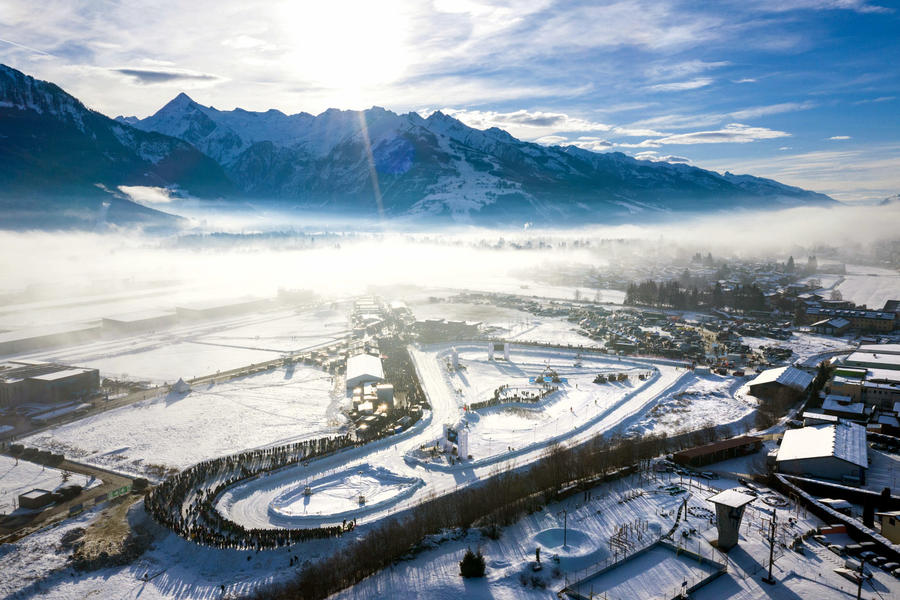 While Goodwood is now a slickly organised event on a massive scale, the far smaller GP Ice Race teeters just on the right side of the divide between anarchic fun and chaos (an example: the media centre was located in a bathroom showroom).

With temperatures relatively high, organisers faced a battle to keep the ice course (slightly dull, short and triangular) from becoming cut up and melting into a pool of slush. That resulted in some schedule shuffling, making an already anarchic event downright confusing.

But this shortcoming was amply compensated for by the incredible machines present, whether racing, doing demonstration runs or on static display. Modern machinery included Mitsubishi Lancers, Skoda Fabia R5s and Subaru Imprezas, while the mouthwatering historic field included numerous 911s and Volkswagen Beetles, a smattering of Saab 96s, some gorgeous classic Volvos and a handful of incredible Group B Audi Quattros. As well as giving Stig Blomqvist a run in its Formula E car, Audi reunited him with a Audi Quattro S1 and tasked triple Le Mans winner Benoît Tréluyer with towing 1987 slalom world champion Frank Wörndl behind a 1955 DKW F91 in the skijoring.

Volkswagen gave a glimpse of the future with the Golf eR1, the test mule for the ID R hillclimb racer now repurposed as an electric showcase. But it also ran a pair of distinctive Beetles: a classic 1302 S and Tanner Foust’s mighty rallycross machine. Foust said “it was fun to rip up an ice track” but that the coolest moment of the event for him was meeting Stuck.

And that sums up the GP Ice Race. It was far from perfect: the short, tight track offered little room for cars and limited sight lines for the 20,000 or so spectators, and it was hard to know what was going on at times. But it provided truly unique sights. Where else are you going to see Stuck pedal a Formula 1 car fitted with six studded wheels, or a Nascar stock car on ice, or a classic Chevrolet Corvette sliding about a frozen airfield? Surreal? Indeed. And brilliantly so.

Skijoring might just be the best motorsport you’ve never seen, spectacular and surreal in equal measure. Skiers are towed round a course by a car (or horses, dogs or snowmobiles); the fastest time wins, and there’s plenty of technique to it. 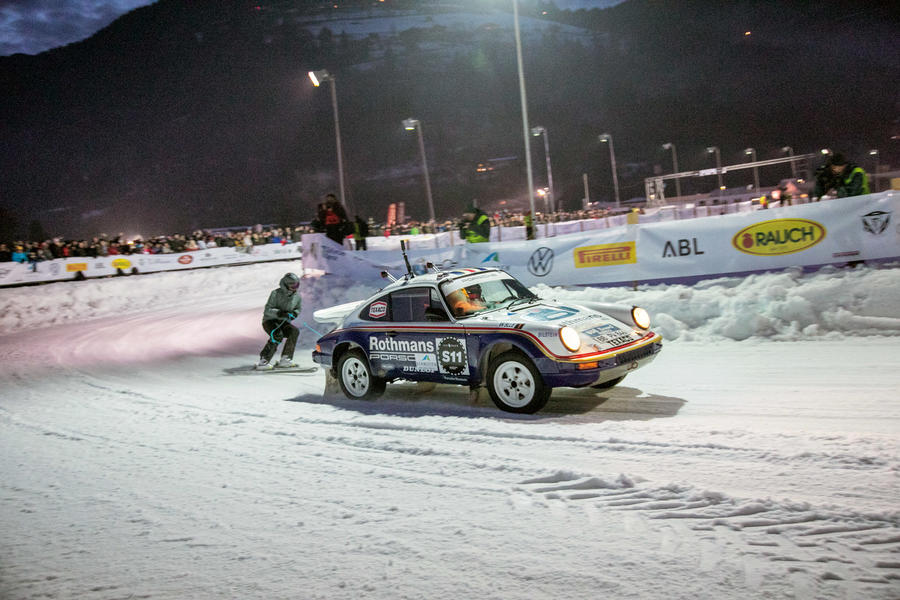 Professional skier Dominik Hartmann was towed by friend Dominik Rickauer’s Jägermeister-liveried 1977 911. “Physically, it’s hard,” Hartmann says. “You need lots of muscles in your arm just to hold the rope.” The key, he tells us, is ensuring that both skier and driver know how they’ll tackle each bend.

While the driver sets the pace, the skier controls the distance between the two by adjusting the slack in the tow rope. “You have to know what they’re going to do,” adds Hartmann. “To carry speed through the bend, a rally car wants to drift, and the skier has to get to the inside for each corner to ensure a smooth line.” 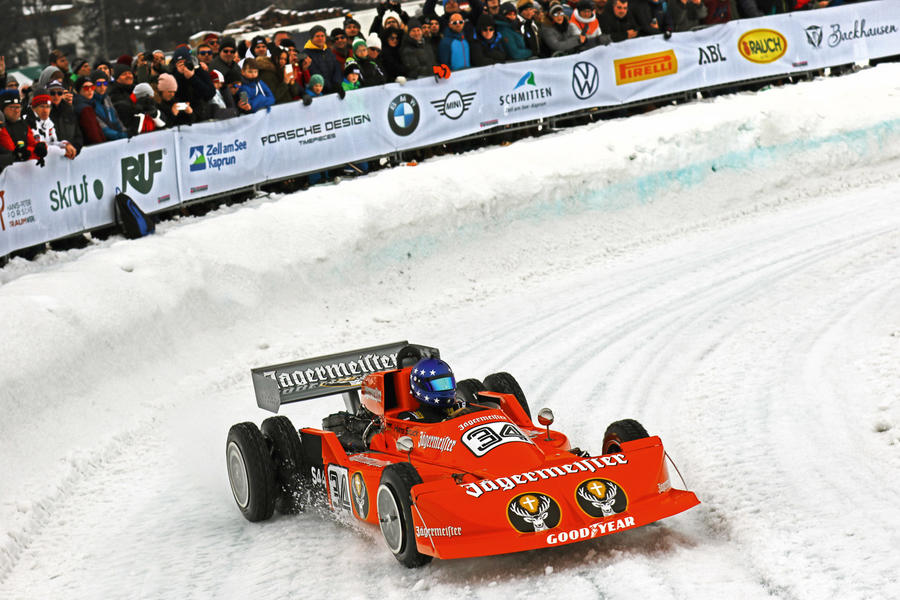 March-Cosworth 761/5: Hans-Joachim Stuck used this March chassis for his F1 debut in 1974. It was rebuilt several times in different specs, including the six-wheel 2-4-0 concept, but is now restored as a 1976-spec 761/5. To give Stuck extra grip, four studded tyres were fitted on the rear axle. 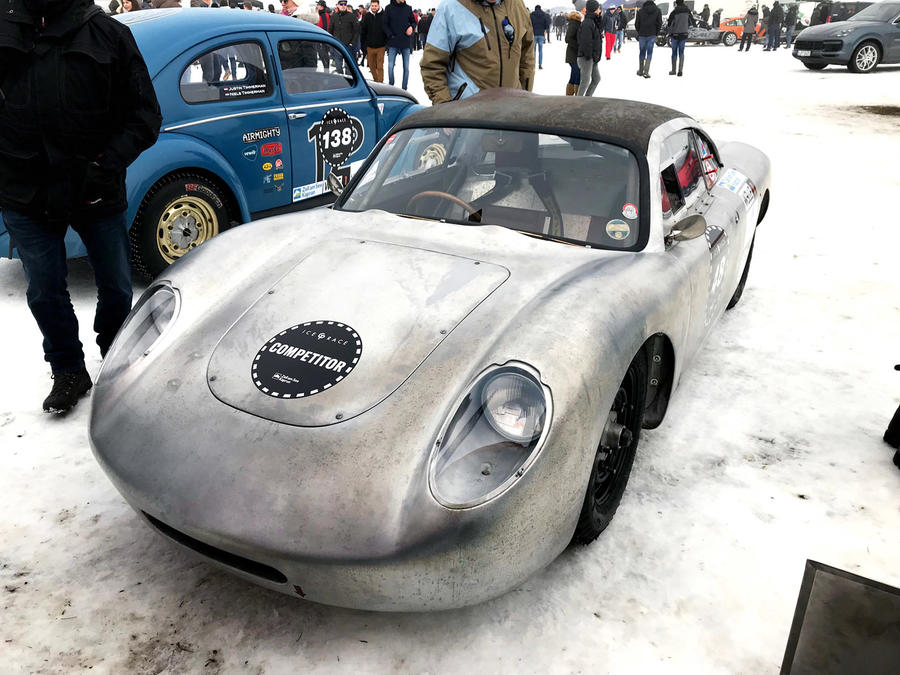 Okrasa Special: British Porsche and Volkswagen dealer David Small began building this car in 1958, using spare parts and aluminium aircraft bodywork. After it sat in a garage for half a century, now-owner Steve Wright finished it over the past decade. It’s still yet to hit 500 miles. 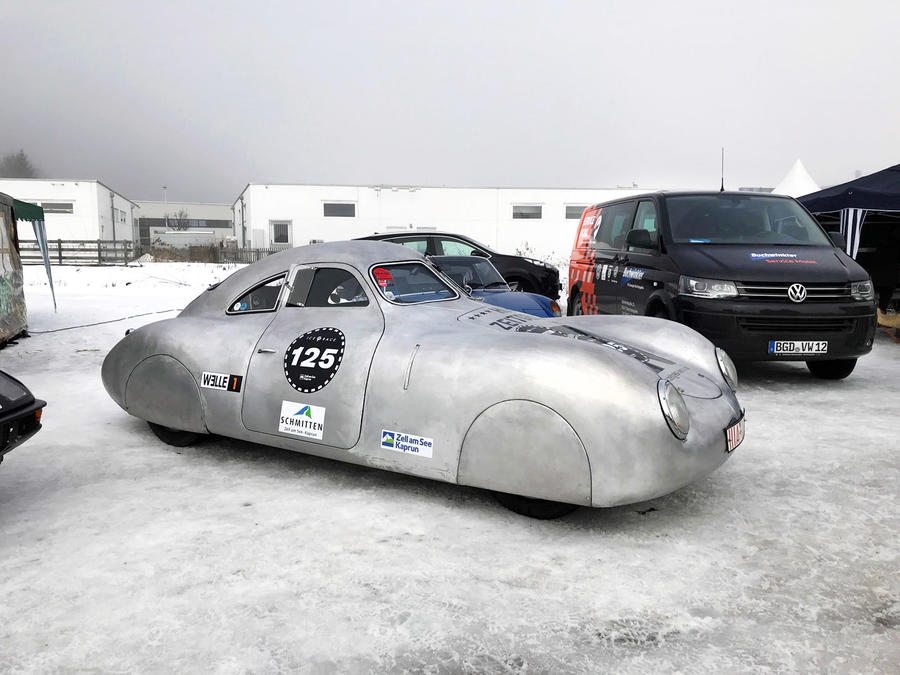 Porsche Type 64: Based on a Volkswagen Type 60 Beetle, the Type 64 was the first car engineered by Ferdinand Porsche, for the 1939 Berlin-Rome race. When the sole surviving original was rebuilt a decade ago, restorer Michael Barbach simultaneously crafted this replica.

Why the GP Ice Race is motorsport at its oddest

Winter tyres: Should I buy them?