BACK TO ALL NEWS
Currently reading: New Audi RS7 receives redesign and 591bhp V8
UP NEXT
Bespoke ‘Silent Shadow’ to start EV era at Rolls-Royce

Audi Sport has unveiled the 591bhp second-generation RS7 Sportback, with a series of upgrades designed to make it a true ‘Gran Turismo’ atop the ever-expanding RS range.

The new machine, revealed at the Frankfurt motor show ahead of going on sale early in 2020, is based on the A7 Sportback, and serves as a sister model to the recently revealed RS6 Avant. It uses the same powertrain as that model, with a 4.0-litre turbocharged V8 fitted with a 48V mild hybrid unit to produce 591bhp and 590lb ft. That results in a 0-62mph time of 3.6 seconds, with a limited top speed of 155mph, or 189mph with the optional Dynamic Plus pack.

The RS7 has been given a major makeover from the A7, with the the bonnet, front doors and boot lid the only body panels remaining unchanged. At 1951mm wide, it is 40mm than the A7. Exterior designer Francesco D’Amore told Autocar that the extra width “allowed us to show the prestige in the car.”

It features a redesigned gloss black Audi Sport single frame honeycomb grille at the front, along with enlarged air vents inspired by those on the R8 supercar - both to make the styling more aggressive and because the engine requires extra cooling. 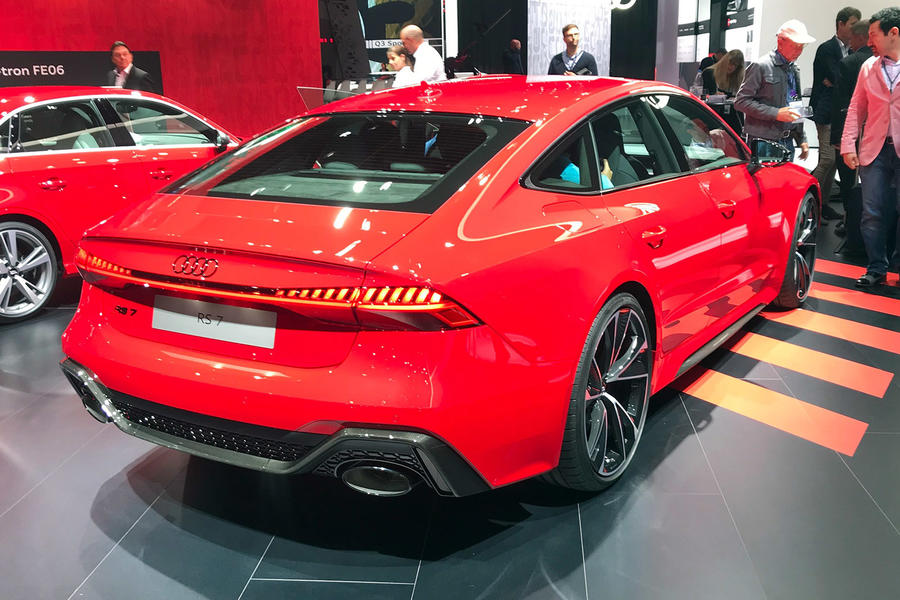 The rear of the car features an RS-specific bumper featuring an enlarged diffuser and surrounded by large oval chrome exhausts, which D’Amore said are the largest ever featured on an Audi Sport model.

LED lights are standard both front and rear, with a thin strip of lights running the width of the boot lid, where a spoiler extends at speed above 75mph.

As standard, the RS7 comes with 21-inch cast aluminium wheels, with 22-inch versions available as an option. There is a choice of standard RS disc brakes, measuring 420mm at the front and 370mm at the rear, or ceramic brakes measuring 440mm and 370mm respectively.

The RS7 is available with a two- or three-seat rear bench, making it the first time the model has been available as a five-seater.

The mild hybrid powertrain is delivered to all four wheels through an eight-speed automatic gearbox, with a mechanical centre differential adopting a 40:60 power split radio as standard, although up to 70 of the power can be sent to the front wheels and 85 up to the rear wheels automatically when required to balance traction. 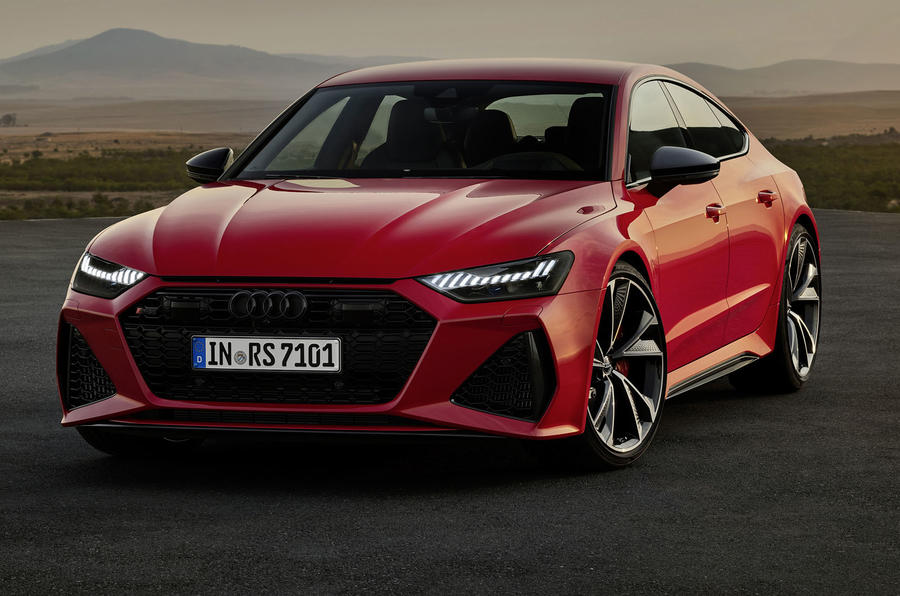 The RS7 features wheel-selective torque control, which can apply gentle braking to the inside wheels when cornering, to boost handling, with an optional quattro sport differential offering even more control of the torque distribution.

Drivers can adjust the noise produced by the V8 engine using the Audi Drive Select system, while an optional RS sport exhaust system is designed to offer ‘an even fuller’ sound.

As with the RS6 Avant, the RS 7 features five-link front and rear axles and adaptive air suspension as standard. The car sits 20mm lower than the result A7, and drops by a further 10mm at speeds above 75mph. RS sport suspension with Dynamic Ride Control is available as an option. The machine is available with optional dynamic all-wheel steering.

Pricing for the new RS 7 Sportback has yet to be set, but it is likely to be an increase over the outgoing model’s £87,610 price tag.

those big archs over the

those big archs over the exausts look awful.

but they do look better in black than silver.

Half close your eyes this is

Audi is now the VAG marque with the most uncertain design direction.

Having a nose for design purity

Audi, this car would look gorgeous if you would stop taking a tin opener to the front bumper. Fed up of the ma-hoos-ive nostrils either side on everything you do now. That is lazy design and engineering. Come up with a pretty way to get air to the front brakes, like everyone else does, please.