The Volkswagen Golf eR1, which made its public debut at last weekend’s GP Ice Race event in Austria, is already a key part of the firm’s electric performance heritage - but it’s also a showcase for future possibilities.

From the outside, the machine looks like a lightly modified Volkswagen Golf TCR touring car. But under its surface lurks the electric powertrain technology that has allowed Volkswagen to set a string of records, and that's being honed for use in a planned line of hot ID variants from the firm’s R performance division. These will sit above the ID GTX range, the first of which will be seen later this year.

Autocar was among a select group of media invited for a short passenger ride in the eR1, on the airfield-based ice track used for the GP Ice Race festival in Zell am See.

What is the Volkswagen Golf eR1?

The eR1 started life as a test mule for the 671bhp twin motor, all-wheel-drive electric powertrain that propelled the Volkswagen ID R hillclimb car to course records at Pikes Peak, the Nurburgring, Goodwood and China’s Tianmen mountain. To test the powertrain while the ID R’s endurance prototype-based chassis was completed ahead of the car’s launch in 2018, Volkswagen Motorsport installed it into a modified Golf TCR touring car bedecked in a development camouflage livery.

Once the ID R was launched in the build-up to the 2018 Pikes Peak International Hillclimb, the electric test mule might have been consigned to history – but it’s now been dusted off, updated and repurposed.

Volkswagen will use the machine to showcase its electric performance technology through a series of event appearances and videos, as well as to test and develop systems that could be used for future electric R car powertrains. 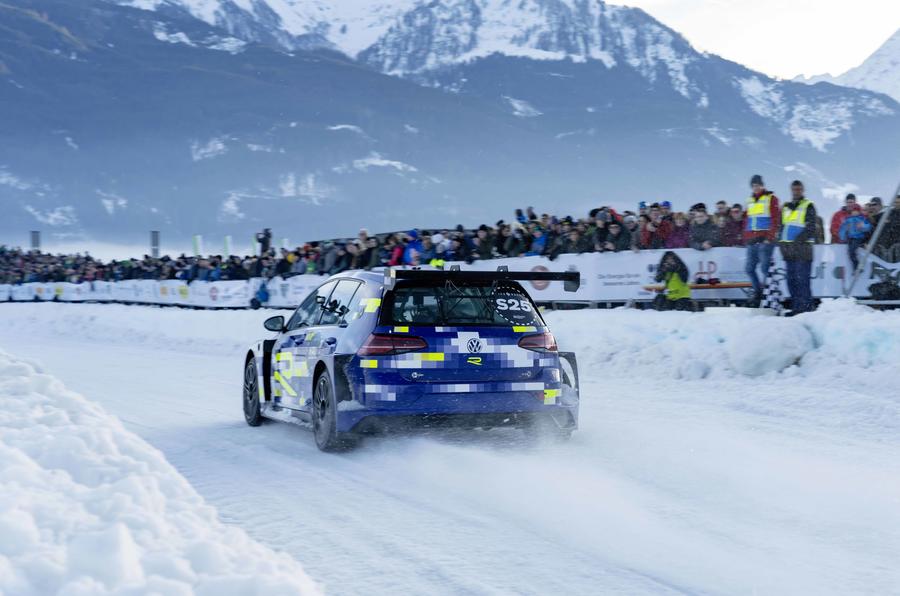 For what is effectively a motorsport test hack, the eR1 is remarkably well-resolved. That’s helped by its new designation (eR1 is more catchy than the test mule's moniker of 'e-technology test car') and fresh livery, but comes mostly down to the team's hard work at refining and upgrading the machine since its former role.

Volkswagen Motorsport hasn’t revealed too many details about the car’s technical systems, although it uses a twin motor layout that offers all-wheel-drive. While the twin motor powertrain eventually used in the ID R offers 671bhp, the one in the eR1 isn’t as powerful, with sources suggesting it’s somewhere close to 500bhp. The car is able to run in two-wheel-drive mode using the front motor only.

Having been fortunate enough to see the ID R in action setting a number of its records, I was prepared for the rapid acceleration the twin motor setup would offer – and it didn’t disappoint. While it didn’t have the full power of the hillclimb machine, it was still plenty powerful for a car of this size. With all four wheels driven and that electric torque instantly available, the eR1 offers predictably rapid acceleration, with the help of studded tyres to lessen wheel spin on the frozen ice circuit. 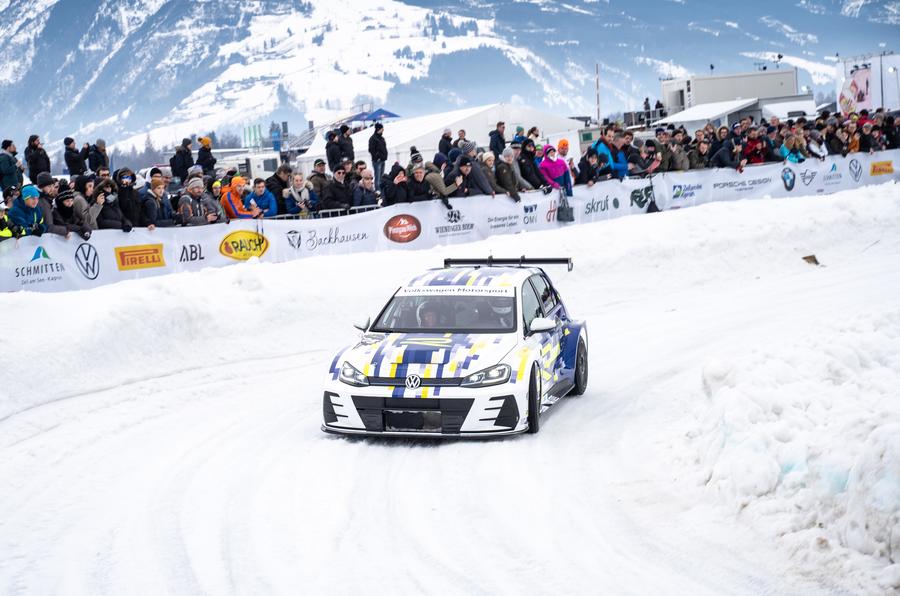 The eR1’s Volkswagen Golf chassis was built for Tarmac tracks rather than frozen ice circuits, and its low ride height did cause some issues: after each run the team was forced to scoop vast amounts of churned-up snow out of the eR1’s front spoiler.

For our test run we took to the circuit behind a production Porsche Taycan that was also giving passenger rides. And, as driver Benny Leuchter – who has raced a Golf TCR in the World Touring Car Cup – excitedly noted, the eR1 was able to catch the Taycan down the straights.

Other than about the car’s acceleration, it was hard to draw too many more conclusions on such a short run. The Zell am See ice track is essentially a large triangle, with three straights linked by three tight turns, and offered few real clues as to the machine’s handling or dynamic potential.

Still, the Golf eR1 did offer further proof that, contrary to some beliefs, electric performance cars won’t be silent. From the inside the distinctive whine of the twin electric motors was surprisingly loud, offering immediate aural feedback as to how hard Leuchter was pushing the throttle. Yet it remained quiet enough that you could hear the sound of churned-up ice and slush hitting the underside of the Golf as it attacked the cut-up surface. 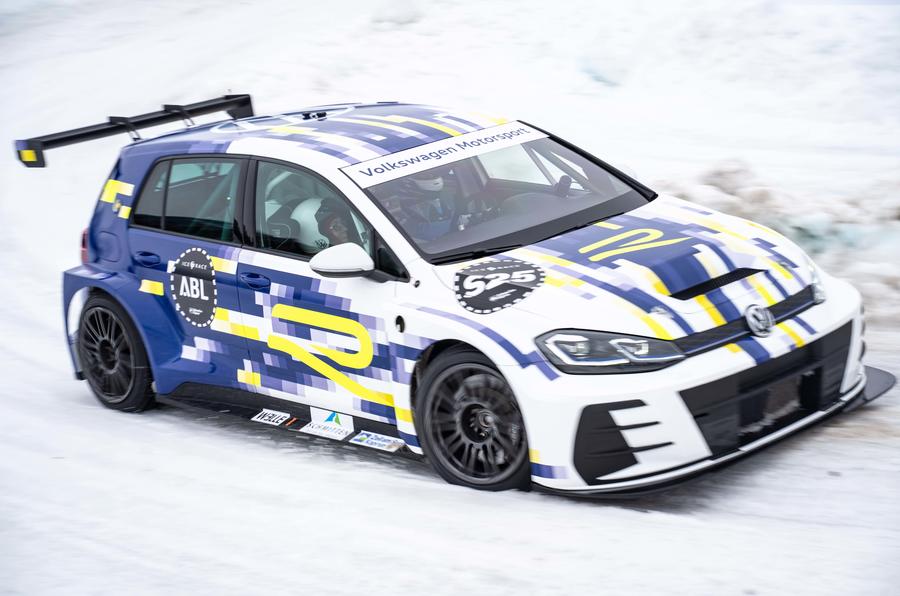 What does the Golf eR1 mean for future electric Volkswagen machines?

The Golf eR1 is best described as an ambassador for Vokswagen’s vision of electric performance cars, rather than as a sign of how that vision will look. The firm has been clear that all future full electric cars will be members of the ID family, with the Golf line reserved for combustion-engined and hybrid models.

While the Golf eR1 is based on a TCR touring car, Volkswagen insists it isn’t a test car for the planned eTCR electric tin-top championship due to launch later this year, and in which Cupra and Hyundai are also fielding combatants. Volkswagen Motorsport does have interest in producing customer cars for that category, but any such machines will be ID models based on the electric MEB platform. 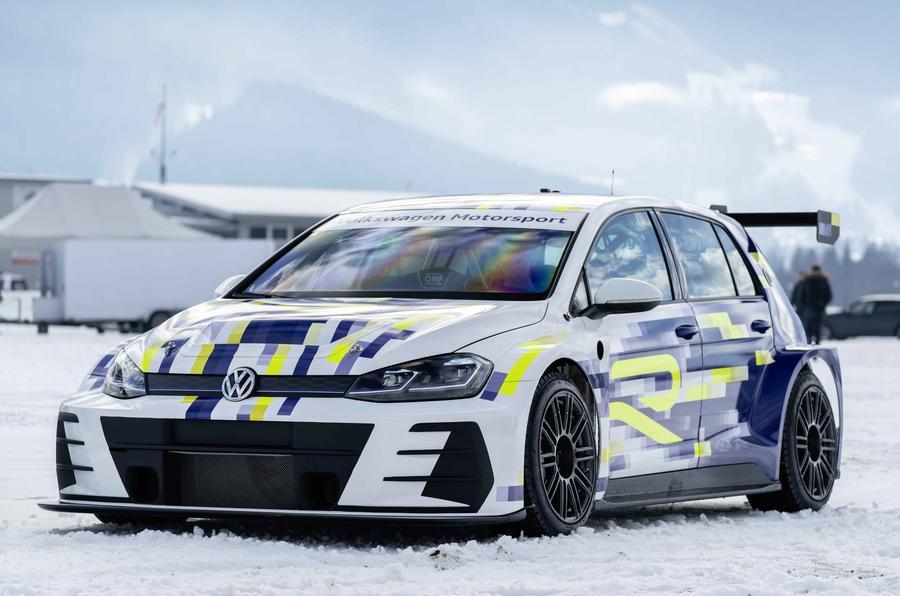 The eR1 will definitely have an impact on Volkswagen’s electric future, though. The firm’s R performance division is working closely with Volkswagen Motorsport to develop electric powertrains and batteries for use in the planned range of high-performance ID R road cars, and such systems could be trialled in the eR1 - or a potential successor.

Volkswagen R boss Jost Capito said that an eventual successor had not been decided upon, but that the eR1 moniker was chosen as a statement of intent, because “by calling it the eR1, we set the target that there will be a 2.”

Any successor would be built on the MEB platform and take the form of an ID model. And with Volkswagen aiming to launch a hot ID 3 R by 2024 at the latest, the eR1 should perhaps be seen as the firm’s first small step towards a true electric performance car. 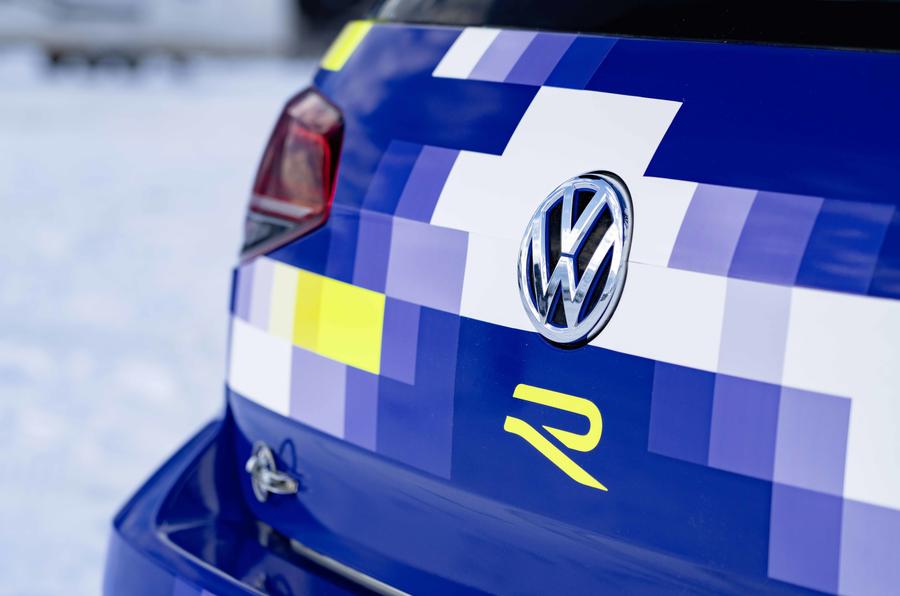 James Attwood: the paid spokesman for VAG. It never ends. This is not an article, but yet another advertisment for VW masquerading as news. Its pathetic how Autocar stoops so low to their masters in Germany....and I thought Brexit was for real