BACK TO ALL NEWS
Currently reading: Analysis: Is this the beginning of the end for diesel cars?
UP NEXT
New Kia EV9 primed as premium electric range-topper

The number of diesel offerings and market share continue to plummet, suggesting the future is bleak for oil-burners
Open gallery
Close

Renault has become the latest car maker to cut a number of diesel models from its line-up as firms balance falling demand for the fuel and increasingly stringent emissions regulations.

This comes as figures reveal that the number of diesels on sale in the UK has nearly halved in the past five years.

Renault’s cull is so drastic that, by the end of this year, only one of its models – the Mégane hatchback/estate – will offer a diesel engine. The Kadjar SUV can no longer be ordered as a diesel, while such versions of the Clio supermini and Captur crossover won’t make it to 2021.

Earlier this month, Ford dropped diesel engines from the Fiesta range due to them taking less than 3% of sales, while even the fleet-friendly Mazda 6 will become petrol-only by the end of this year.

Data obtained by Autocar reveals that there were 493 diesel variants available to buy in the UK in November 2015. That includes all volume passenger cars, pick-up trucks and four-wheel-drive variants of the same engine but doesn’t include automatic variants.

That figure has fallen to 267 today (excluding variants due to be withdrawn in the coming weeks) and is continuing to fall.

A few brands, such as Alfa Romeo and Jaguar, have increased their range of diesel offerings during that period, but they’re in the overwhelming minority, as our table (below) shows. 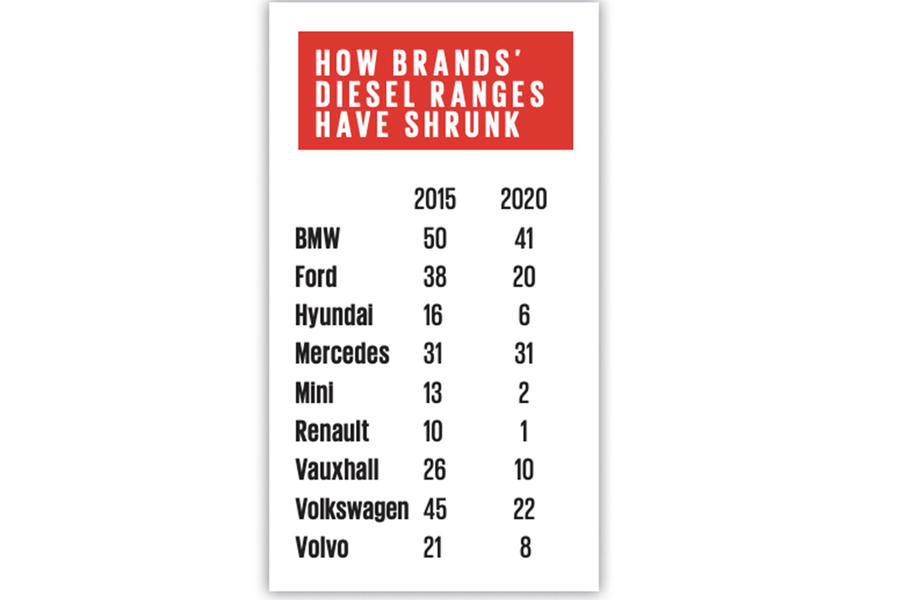 Some of these drops aren’t surprising. Makers including Porsche, Toyota, Volvo and most Fiat Chrysler Automobiles brands have either ditched diesel entirely or intend to move away from it over the next couple of years. But even those that have previously stood by the fuel have shed variants, including BMW, Vauxhall and the majority of the Volkswagen Group brands.

Volkswagen – the focus of the Dieselgate emissions cheating scandal that began in 2015 – in particular has decimated its diesel offerings, getting rid of more than half.

Mercedes-Benz is the only big German brand to have maintained its diesel offerings in the past half-decade. CEO Ola Källenius said last year that he was “cautiously optimistic” about the fuel’s future, noting that it offers a 15-20% economy benefit over petrol. Mercedes is also attempting to further future-proof by expanding its range of diesel-electric plug-in hybrids – a powertrain no other manufacturer currently makes.

However, Mercedes is an outlier when you look at wider market trends. Data from the Society of Motor Manufacturers and Traders shows that of the 1.244 million new cars sold in the UK in 2020, just 209,000 have been diesels.

There are multiple factors at play here, all influenced by one another. On the private buyer side, public attitudes towards the fuel have changed dramatically, bolstered by continuing government and local authority efforts to remove older diesel vehicles from urban areas and promote less polluting alternatives. On the fleet side, benefit-in-kind tax changes have increasingly encouraged business users into hybrid and particularly electric cars. 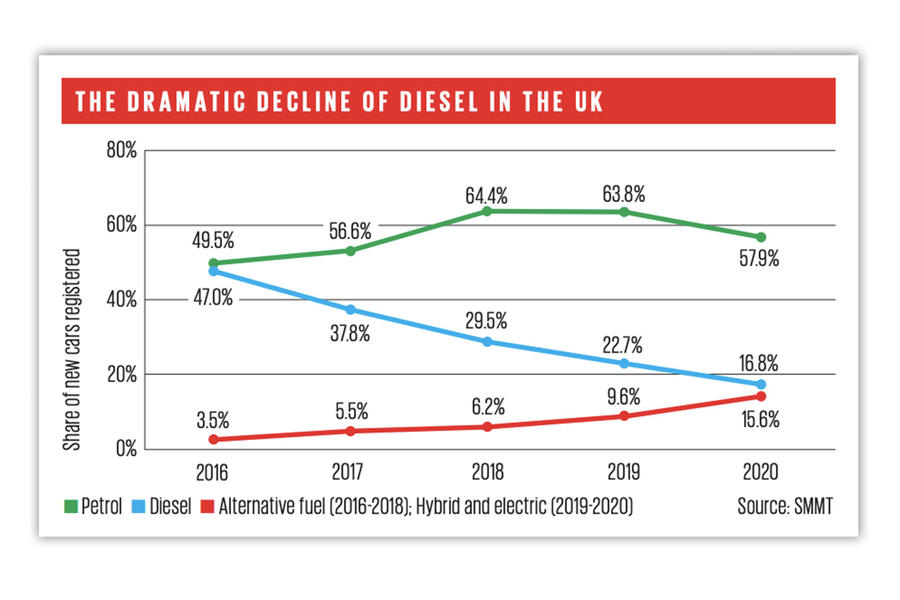 The effect on the industry is obvious: manufacturers are increasingly reluctant to spend huge amounts on developing diesel engines to meet ever more stringent European Union rules if that investment can’t be matched by sales revenue.

Can we finally conclude that the death of diesel is inevitable and imminent? The figures speak for themselves.

The Diesel data reported by the SMMT does not include diesel engined mild hybrids (MHEV) and diesel engined plug-in hybrids (PHEV). Most data releases  European bodies like Germany's KBA, Italy's ANFIA, SMMT, and analysts such as JATO etc lump all the hybrids in with EVs even they have sizeable internal combustion engines. For example half of the 8 engine options for BMW's 4 series coupe are mild-hybrid diesels, but they will be classed as EVs. Most of JLR's diesel offerings are now mild-hybrids. Diesel really isn't dead, it is just changing!

Answer to the question posed by the article

Yes it is the end for diesel cars. Only BMW, Mercedes-Benz and VW/VAG (shamefully) seem to still be producing a large part of their ranges with diesel engines. Autocar still promotes diesel as a fuel, for example the road test of the BMW 420d, when a responsible magazine would not be doing that. Promises to introduce diesel six cylinders like the M440d are stupid and short-sighted. It is not likely these variants will go on sale in the UK. For example the BMW M550d is not going to be sold here and diesel six cylinder X7s have been discontinued. From what I can gather by the end of 2021 BMW will only be making four cylinder Diesel engines but even that should stop in favour of PHEVs.