BACK TO ALL NEWS
Currently reading: Volkswagen and Porsche to get new brand bosses, reports suggest
UP NEXT
British GP: 70 years of racing magic at Silverstone

Volkswagen and Porsche to get new brand bosses, reports suggest

The Volkswagen Group will shuffle its brand management by appointing new heads of Volkswagen, Porsche and Skoda, German media is reporting.

Herbert Diess will retain control of overall Volkswagen Group operations but hand the day-to-day management of the Volkswagen brand to Blume, who has been the CEO of Porsche since 2015.

The publication claims that Blume is being brought in to deal with significant problems facing two of Volkswagen's most important new models: the Mk8 Golf and the ID 3 electric hatchback.

Both cars have reportedly been plagued by software issues, which has delayed production and lead to belated market introductions.

Blume already serves on the Volkswagen Group board of management as head of production. Maier, who is rumoured to be in line to replace him, served as head of marketing at Porsche before moving to head up Skoda in 2015.

The changes follow on from a reshuffle last week in which Volkswagen's chief technology officer, Matthias Rabe, moved to Bentley to become its engineering boss. He replaced Werner Tietz, who moved to Seat to head research and development. 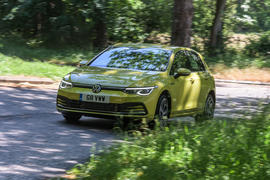 If everything in life

was as reliable as a Volkwagen, oh how we laughed..

The whole senior management of the entire VAG group seems to be on a Merry-go-Round. Didn't Audi recently go through three CEOs in 18 months?Not a good symptom or indicator for the future success of the Group. Smells more of 'thrashing about'.

I wonder how it will end?