8
Tesla scored a smash hit with the Model 3 compact saloon; surely an SUV version is certain for even greater success?
Up next: Prices & specs
Share review
Open gallery
Close

If you know about the Tesla Model 3, you will already know quite a lot about this, the Model Y.

It completes Tesla’s core line-up of S, 3, X, Y models (Ford wouldn’t release the Model E name it owns...) and is effectively a crossover version of the Model 3 junior saloon. It will understandably cost a few grand more, with UK prices starting at £54,990, and deliveries are due to commence early next year.

It’s bigger than the Model 3 – only by 50mm in length (so it’s 4.75m long) but a full 181mm in height. Just 27mm of that goes into increasing the ground clearance to 167mm, so the body height is stretched by more than 150mm, which should do head room a favour.

How to describe the looks? I won’t dwell too long, because you can make your own mind up, but a videographer colleague described it as looking like a generic car you would nick in the Grand Theft Auto video game that’s sort of meant to look like something else but doesn’t quite do so; or maybe one from an insurance advert where they take a real car and digitally remove its most distinguishable features. Maybe we’re still getting used to a grille-less future. Among Tesla owners, it turns a few heads, mind.

At launch, there will be two versions, both with two motors and thus four-wheel drive. The slower model is the Long Range tested here. It has a motor on the rear axle and a less powerful motor at the front giving a combined 434bhp, which is good for a 0-62mph time of 5.0sec and a top speed of 133mph. Then there’s the Performance version with a 483bhp total and an exceptionally whizzy 3.7sec 0-62mph time.

Some people might say that you don’t really need a mid-size SUV with that kind of stomach-warping acceleration, and they would probably be right. But the truth is that if you want to regenerate large amounts of power under deceleration (and you will, because that’s quite an efficient thing to do), you need quite a capable motor-generator to do it. So you’re basically getting the acceleration as a byproduct of the regeneration capacity.

The acceleration, top speed and indeed range figures for the Model Y are all down a bit over the respective Model 3 variants, which is partly a reflection of the crossover’s increased kerb weight (2003kg) and probably even more its greater frontal area, because aerodynamics are so crucial to a car in motion.

It’s still competitively leggy, though, scoring 315 miles on the WLTP test cycle, which might even turn out to be longer at some point. Tesla doesn’t publish its battery sizes, but word is that this Model Y has around 75kWh of usable capacity out of a total of 79kWh. It can be charged at rates of up to 250kW by a DC rapid-charger and at up to 11kW by an AC one, via a plug port on the rear-left corner.

The battery pack sits low between the wheels, which are suspended by double wishbones at the front and a multi-link set-up at the rear, with coil springs and non-adaptive dampers. Those wheels are 19in diameter as standard, or you can specify our test car’s rather natty 20in Induction items, shod with 255/40- profile Michelin Pilot Sport EV tyres. 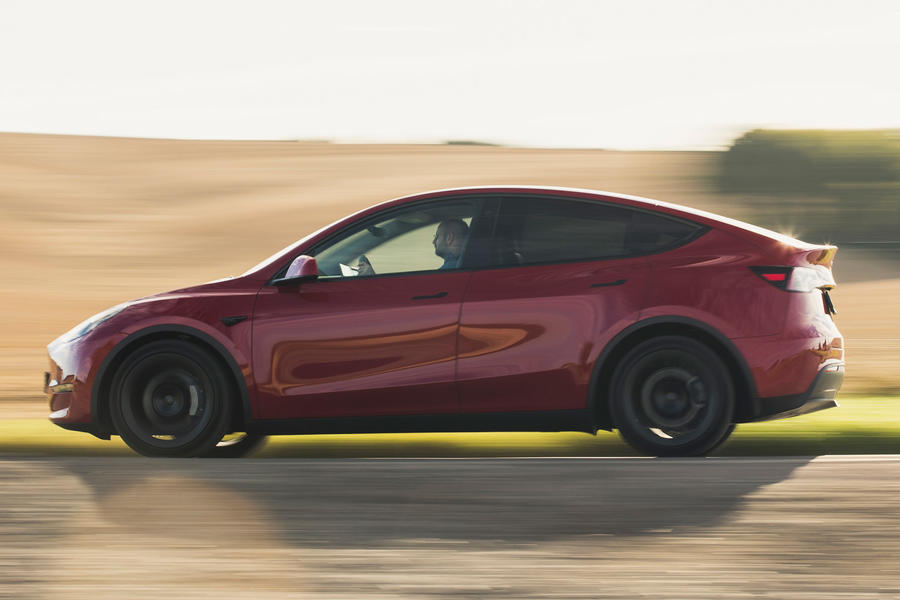 Because of the nature of its architecture, the Model Y offers a lot of luggage space. There’s a 117-litre frunk (or froot, or just boot, or whatever) under the bonnet and an 854-litre boot at the back, with more underfloor space than in the Model 3, because the floor is higher. There’s a cubby beneath that you would likely use for storing the charging cables.

Fold the rear seats forward and add up oddments storage – of which there’s plenty – and you end up with 2100 litres of cargo space. At the moment, all Model Ys for the UK are five-seaters. There’s a seven-seat option elsewhere but no word yet on when that will arrive here.

The extra body height does indeed give great head room. There’s a huge non-opening sunroof, too, and a relatively low windowline that makes for an airy cabin. There’s a strip of light-coloured matt wood around the front of the dashboard, some brushed aluminium and the same silvered plastics as those fitted to the latest Model 3, lighter and less markable than piano-black plastic. Critiquing the quality of the switchgear is a toughie, because there’s hardly any of it.

If the mechanicals of the Model Y will be familiar to Model 3 drivers, likewise will be its driving environment. It has an exceptionally clean cabin that, apart from door switches, window switches, two column stalks and two multi-function dials on the steering wheel, has everything delegated to the 15in landscape-orientated touchscreen on the centre of the dashboard. From displaying the car’s speed to opening the glovebox, it’s all here. And if you think that sounds like Tesla is asking one screen to accommodate rather a lot, you would be right.

In some ways, I get the logic. Why have separate buttons to move the door mirrors or the steering wheel, given that it’s something you should do before you set off? So tap a menu and then an icon on the screen and use the dials on the steering wheel to do it. It looks cleaner, there’s less going on and it’s cheaper than fitting separate levers and buttons. But there’s a layer of complexity to some controls that wouldn’t be there if there were a button exactly where you had left it. I would particularly like a standalone temperature dial.

That said, no one does touchscreen functionality or presentation as well as Tesla. The resolution is great and the system is cleanly laid out and responsive. Setting the sat-nav is a doddle and the way that integrates with Tesla’s excellent Supercharger rapid-charging network is terrific. 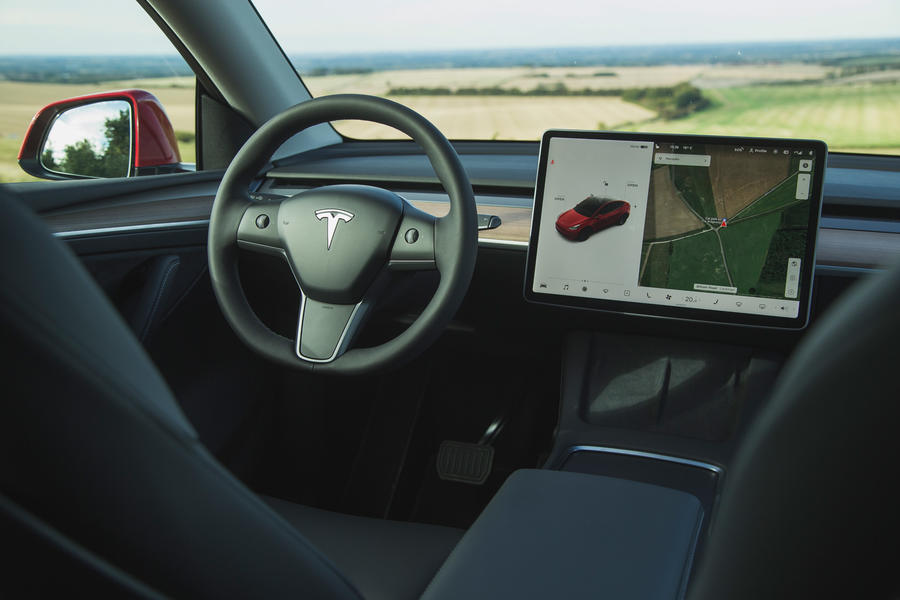 Where Tesla is still catching up is in the old-school dynamic engineering side of things. There’s nowt wrong with the driveline, which is both smooth and linearly responsive (with varying degrees of either depending on whether you select a ‘Chill’ throttle response or a normal one). There’s a lots of deceleration on lift-off, which is fine, although I would quite like paddles to vary it, and it never comes to a one-pedal stop as easily as the Nissan Leaf. You can select whether you would like the car to creep like an auto, roll like a manual or auto-hold when stationary, mind, which is great. And you can adjust the weighting of the steering.

But it doesn’t ride too cleverly. I would like to try a Model Y on 19in rims in case that’s better, but it’s quite brittle like this. You get used to it quickly, but it never feels like there’s tremendous body rigidity and the intrusion affects the otherwise strong refinement. And I’m not convinced there’s a need for it.

A dynamics engineer explained to me recently that EV makers are still getting on top of this. Because EV bodies are heavy, the temptation at conception is to fit thick anti-roll bars to keep the body upright, which essentially means the suspension is no longer independent and the ride suffers. But, he reckons, because EVs have an inherently low centre of gravity, you don’t need those thick bars after all, which means each side’s suspension can breathe. Some manufacturers do this better than others. It’s not a direct competitor to the Model Y, but the Porsche Taycan probably gets it more right than anything else.

The rest of the driving experience is good. The steering is smooth, is accurate and has a good amount of self-centring. It doesn’t need more weight than in Comfort, the lightest of its three modes. It doesn’t give you much encouragement, but the handling is steady, and it’s churlish to ask much more of a family SUV. 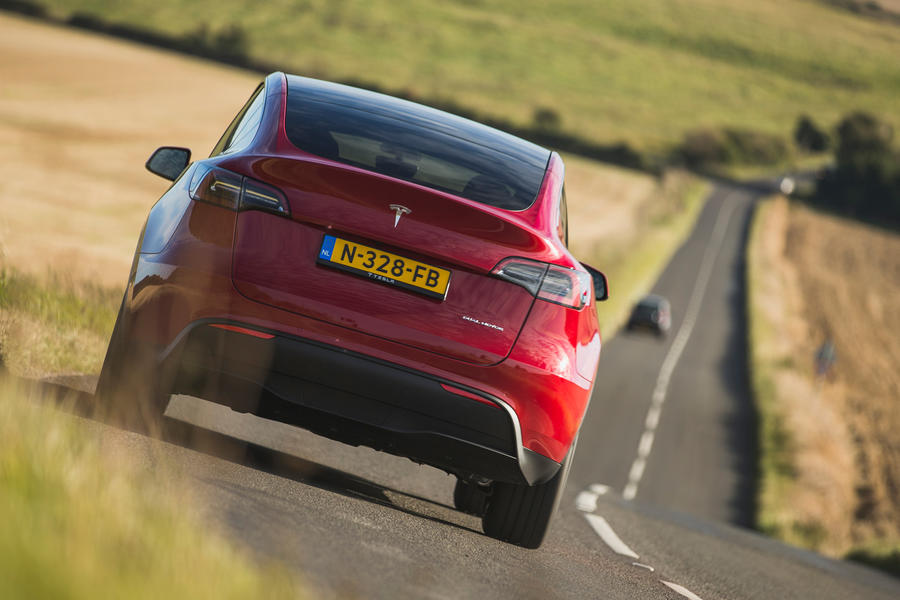 All Model Ys come with Tesla’s Autopilot system, whose name I don’t like much for a pretty good adaptive cruise control system that will help out with steering too. I like the name of the Full Self Driving Capability option (not fitted to our test car) even less. While Tesla writes in pretty large print about “fully attentive drivers” with their “hands on the wheel at all times” and we know what these things do and how they work, it’s still poor judgement to use such names.

All told, though, this is a good car. Another good Tesla. The competition for the Model Y is much better today than for the Model 3 when it arrived here in 2018, but the establishment sometimes copies the wrong bit when trying to do what Tesla does. (For example, Volkswagen, of all companies, has entirely screwed up the simple concept of adjusting the temperature in the ID 3 and ID 4.)

This means that, despite some dynamic shortcomings and being too touchscreen-heavy, the Model Y is comfortably towards the top of the class, and with access to a charging network that’s still second to none.