BACK TO ALL NEWS
Currently reading: Can you tow with an electric car or a hybrid?
UP NEXT
Next Mazda MX-5 to maintain driver focus with petrol power

Can you tow with an electric car or a hybrid?

As sales of electric cars continue to soar, so do the expectations of the people buying them. It wasn’t long ago that EVs were seen as second cars that were handy for short local hops but little more. Now owners are becoming more ambitious and are expecting to travel further afield for longer – and, in many cases, that means the possibility of hitching their battery-powered machine to a caravan or trailer. So are the latest generation of electric and hybrid vehicles up to the task? Here’s our in-depth guide with all the answers.

Why can't some electric and hybrid cars tow?

With their torquey and powerful electric motors, you’d expect EVs and hybrids to make the perfect towing partners, able to pull heavy loads with far less effort than traditional internal-combustion models. Yet dig deep into the specifications of many of these machines and you’ll discover that very few of them are capable of being hitched up to a caravan or a trailer. It’s not that you're unable physically to attach a tow bar. It’s simply that the vast majority haven’t been granted type approval.

Why not? Well, there are a number of reasons, from specific EV technology to range concerns, but perhaps the greatest stumbling block from an engineering point of view is mass. Battery packs are heavy, meaning many EVs tend to weigh a lot more than a similar sized petrol or diesel machine. (A petrol Volvo XC40 weighs at least 1655kg, whereas the electric version tips the scales at 2188kg, a 533kg difference.) Start adding extra mass to the already hefty kerb weight and you’re in danger of over-stressing already hard-working components such as the brakes and transmission. Even on the lighter hybrids (around 1800kg or so), the combined weight of car and caravan could be up to three tonnes, which would require substantial mechanical strengthening.

In a similar vein, the complex regenerative braking system is also a limiting factor. When slowing down, the electric motor in an EV or hybrid acts as a generator, pouring otherwise lost energy back into the battery. A by-product of this process is a useful ‘engine braking’ effect similar to that in internal-combustion machines. It's tuned specifically for the car’s kerb weight so there’s a risk the system could be overloaded with the extra kinetic energy created by a heavy trailer, particularly on steep descents. Of course, many EVs allow you to disengage the regenerative braking, but while this might save the motor, it would put immense strain on the friction braking system.

This is even true of braked trailers, which have a fairly simple mechanical overrun drum braking system. It’s triggered by the force of the trailer or caravan pressing on a mechanism in the tow bar as the tow car slows. However, it only works when relatively high braking loads are sensed, so for most of the time, it’s the tow car’s brakes that are doing the lion’s share of the work.

Finally, there’s the question of range. Couple up a heavy or aerodynamically inefficient load to the back of your battery-powered car and you’re likely to see a dramatic increase in electricity consumption. This is a particular issue for caravan owners, who tend to want to travel far and wide in search of camping locations. As a stark example, in 2020, Audi North America used an E-tron to pull a 1800kg trailer on a 500-mile road trip from Tulsa, Oklahoma to Austin, Texas. Overall, the electrified SUV managed around 100 miles between charges - less than half the car’s 241-mile range when travelling untethered.

Electric cars that can tow

However, while many EVs can’t tow, there are a few that can - and more are hitting showrooms all the time as buyers begin to be slowly weaned off fossil fuels. Perhaps unsurprisingly, it’s Tesla that leads the way when it comes to electric vehicles that can tow and its gull-winged Model X SUV is able to haul up to 2270kg when using a braked trailer.

Next up in the muscle stakes are the Audi E-tron and Mercedes-Benz EQC SUVs, both of which can pull a braked trailer up to 1800kg and an unbraked load of 750kg. The recently announced Hyundai Ioniq 5 and closely related Kia EV6 can handle braked weight of up to 1,600kg, while the Polestar 2 has a braked limit of 1500kg and 750kg unbraked. This lower figure is the maximum weight that a Jaguar I-Pace, Ford Mustang Mach-E or Mercedes EQA can tow regardless of braking layout, which effectively limits it to medium-sized trailers and the smallest caravans.

Other electric vehicles that can tow include Stellantis's electric MPV trio - the Vauxhall Vivaro e-Life, Citroen e-SpaceTourer and Peugeot e-Traveller - all of which are capable of towing up to a maximum of 1000kg.

This is the same figure that’s achieved by the rear-wheel drive versions of both the VW ID4 and the closely related Skoda Enyaq IV, although it’s expected the forthcoming four-wheel drive variants will increase this figure to 1,200kg.

Hybrid cars that can tow

Perhaps a better bet for towing are hybrids, both the plug-in and self-charging varieties. For starters, with internal-combustion engine back-up, these machines are less limited by range anxiety because you can simply pull in and fill up at any fuel forecourt. They also don’t have such a powerful regenerative braking effect, so less stress is put on the motor and the electronic control unit. Better still, there’s a wider range of models to choose from. 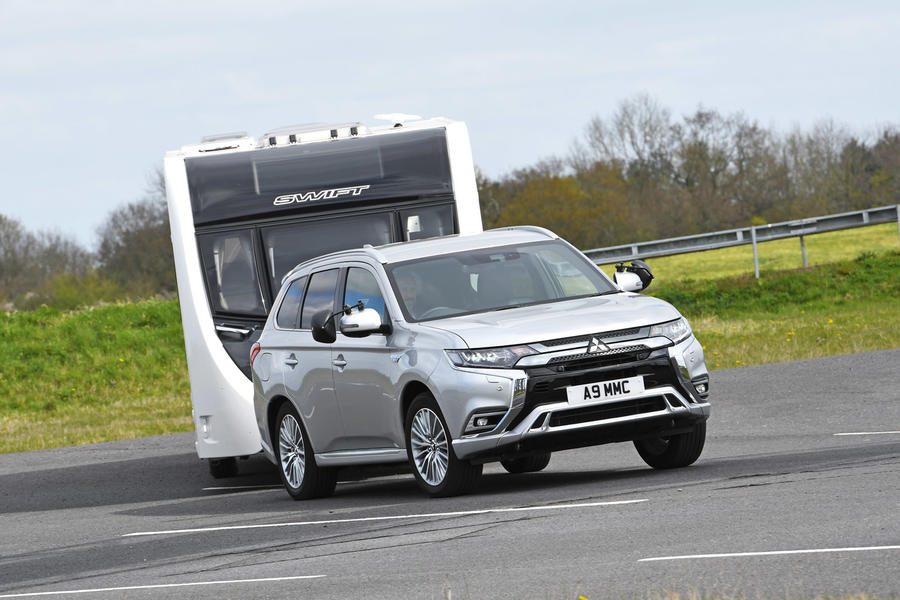 We’ll overlook mild hybrids here, as these are effectively standard internal-combustion models with an enlarged starter-generator unit that doesn’t provide any independent motive force. As for more traditional, or self-charging hybrids, Toyota’s Prius and CH-R can manage to pull a maximum of 725kg, while the Corolla adds 25kg to that total - the same figure as the Honda CR-V Hybrid and Hyundai Ioniq. The Kia Niro has a little more muscle and can tow a braked trailer up to 1300kg, while the four-wheel-drive Toyota RAV4 can manage 1650kg. This is the same figure achieved by the hybrid versions of the new Kia Sorento and its Hyundai Santa Fe sibling, plus the new Hyundai Tucson (in both hybrid and PHEV guises). For the ultimate pulling power, however, the Lexus RX 450h takes the spoils, with an impressive 2000kg capability.

However, if you’re looking to haul the heaviest loads, then plug-in hybrids are the best bet. Some are no better than their self-charging siblings, with the Kia Niro PHEV capable of exactly the same 1300kg as its hybrid twin, which is also the figure quoted from the Citroen C5 Aircross PHEV - c.uriously, the similarly powered DS 7 Crossback E-Tense 4x4 can manage only 1200kg. The Hyundai Santa Fe PHEV claims a braked maximum of 1350kg, which is less than the 1500kg figure of the mechanically very similar Kia Sorento PHEV. The Mitsubishi Outlander PHEV also has a braked maximum of 1500kg, while the Volkswagen Golf GTE has a 1600kg limit. As you’d expect, Volvo has worked hard on towing, with the V60 T8 Recharged capable of 2000kg, which is 100kg less than the similarly powered XC60 T8 Recharge. The Audi Q7 TFSIe and Volvo XC90 T8 Recharge can both pull up to 2700kg.

At the top of the towing tree are cars such as the Porsche Cayenne E-Hybrid and forthcoming VW Touareg R. Using the same V6 petrol engine and plug-in electric drivetrain, these two large SUVs can handle braked trailers and caravans up to 3500kg, which is the maximum permitted by any car. To tow more, a vehicle needs to be designated a large goods vehicle. The V8-engined Cayenne Turbo S E-Hybrid can also pull this impressive amount, as can the Land Rover Defender P400e. To tow any more than 3,500kg would require the car to be redesignated a large goods vehicle.

Can electric and hybrid cars be towed?

Just like a standard internal-combustion car, an EV or hybrid can suffer from breakdowns on the road. With pure-electric vehicles, this is as likely to be caused by a flat battery as a mechanical fault, but either way, there are situations where you’re going to need rescuing from the roadside. You’ll need to get the car to a garage, your home or a charging station, but how easy is it to tow a hobbled hybrid or immobile EV?

In general, the best advice is to call a breakdown recovery service rather than attempt a DIY rescue with a traditional tow rope. Many EVs don’t have a neutral position in the transmission, meaning the motor (or motors in four-wheel-drive machines) remain permanently engaged, so if you try towing with all the wheels in contact with the road, you risk damaging the drivetrain and the control units. As a result, most manufacturers recommend that the car be put on a flatbed truck.

With two-wheel-drive models, it’s possible to use a towing dolly that lifts the driven wheels off the ground, but even then, the advice is to avoid this method if you can because many EVs and hybrids have electronic parking brakes that automatically engage as soon as the vehicle is switched off.

However, there may be a simpler solution on the horizon, because the AA is trialling special free-wheeling hub attachments. Looking much like space-saver spare wheels, these neat devices can be quickly attached to the rear wheels of broken-down electric or hybrid vehicles. With a large diameter, these hubs allow the broken vehicle’s wheels to be lifted clear of the road and remain stationary. The front wheels are then lifted clear of the road by a towing dolly and the car can be recovered without any strain on the electrical drivetrain. Neat.

Year Zero: how will the grid cope? Are blackouts a risk?

Year Zero: can it all be from renewables?

Year Zero: how much electric power will we need?

Log in or register to post comments
Gordon Fleming 1 September 2021
My problem with towing in the UK with a Tesla model 3 is the lack of chargers on islands. You have to detach the car and caravan to charge. The towing vehicle will need to charge twice as often but the charging network is not available for attached trailers. You need rapid chargers set on islands like petrol station pumps.
Jscott1000 11 August 2021
When towing a heavy trailer with double the mass expect it to take double the energy and range to be cut in half. This is basic physics which cannot be avoided.

With my gasoline truck it means my 600 mile range is cut to 300 miles. But I can still refill in 5 minutes and be on my way.

Electric vehicle towing is going to take inconvenience to a new level. 100 mile range and hours to get back to 100% are a deal breaker for all but the most die hard EV fanatics.

Under most real world conditions there simply aren't enough chargers to get from one to the next when towing range is factored in.

The manufacturers are not being honest by listing towing capacity and range (unloaded). Towing range is going to be a great disappointment for all EVs.

Great information you provided! We are planning to migrate to electric towing cars and reading this article has satisfied my thoughts. Thanks for sharing!