From £27,2858
Petrol-electric SUV isn’t exciting, but what CR-V ever was? Comfy, refined, spacious and dynamically competent, with respectable performance and drivability
Open gallery
Close

The Honda CR-V has reached something of a zenith with this first-ever hybrid version of the new fifth-generation model.

I’m not sure this super-sensible, practical, grown-up family SUV has ever felt more rational, more serious or less exciting than it has become by the edition of Honda’s latest petrol-electric powertrain. You might even say that ‘peak CR-V’ has finally been achieved. In the car’s own super-sedate, marvellously boring way, that’s quite something to behold.

You won’t find a modern passenger car with much less sporting pretense about it than this. Consider, for example, that it has a powertrain with two electric motors (the main ‘drive’ one producing some 181bhp) and a 2.0-litre petrol engine (which produces 143bhp at maximum power) and yet Honda apparently can’t tell you how much power or torque that powertrain makes as a combined whole. That says a lot about how much CR-V customers are expected to care about such things, doesn’t it? Not even a fraction of half of a jot, bless 'em.

The car’s new ‘multi-mode drive’ hybrid propulsion system is interesting because, unlike older Honda hybrid set-ups, it aligns the piston engine in series upstream of the electric motor, rather than in parallel when it might have driven into a shared transmission; because that transmission consists not of CVT-like planetary gearing but instead of a single-speed ratio onto which the combustion engine is coupled by an electronically governed clutch; and because, when the car’s running in hybrid mode, there’s no connection between the combustion engine and the wheels at all.

A third ‘engine drive’ operating mode (the others are EV and hybrid) allows the 2.0-litre lump to mechanically connect to the gearbox when the car is cruising at higher speeds and running under higher loads – but most of the time, it really is the car’s 181bhp electric motor and only that doing the driving. 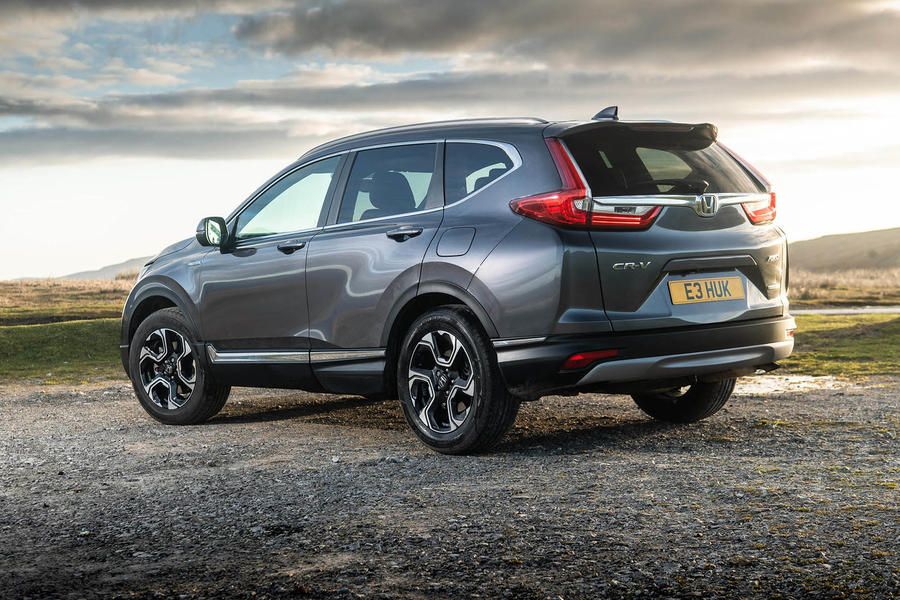 Like its 1.5-litre turbo petrol range-mate, the CR-V Hybrid has a particularly spacious, comfortable and solid-feeling cabin which, while it doesn’t broadcast its perceived quality quite like an equivalent Audi or Mercedes, certainly ensures that its integrity percolates slowly into your awareness. The car carries its lithium ion drive batteries under the boot floor, and so - while you can’t have one of these with seven seats, nor even a spare wheel – onboard space for five isn’t adversely affected (there’s loads), and boot space is pegged to a slightly reduced 497 litres.

On the move, it scores highly on cabin isolation, mechanical refinement, ride comfort, handling stability and all-round ease of use – and better in many of those ways than the regular petrol version. Not that any of the aforementioned ought to come as a turn-up for the books.

But that hybrid powertrain does have the capacity to pleasantly surprise in some ways, offering better drivability and part-throttle responsiveness than petrol-electric hybrid powertrains have so often tended to – albeit without ever threatening to make the CR-V an interesting car to drive.

Step-off feels entirely EV-like - super-smooth, fairly responsive and seamless in its initial acceleration - because of the total lack of declutching or gearchanging that’s going on. The car doesn’t run for long, either in terms of distance travelled or throttle travel probed, before the petrol engine starts. That engine runs very quietly, though, and while it’s always spinning in closer proportion to the demands made by your right foot than in any useful relationship to prevailing road speed, it doesn’t resort to apparent over-revving until you’re at least fairly close to the pedal stop.

Part-throttle performance is strong enough to make the car feel well within itself in give-and-take daily traffic, as well as punchy enough for overtaking and urgent motorway accelerating. On real-world economy, meanwhile, our test car returned just over 45mpg on a mixed route. The more of your motoring that you do in traffic, and the more practiced you get at keeping the car running on electric power when possible (it’s not quite as easy as in a Mitsubishi Outlander PHEV, but close), the better your economy return should get.

The car’s ride is impressively quiet and, being on the softer side of the SUV class’s dynamic spectrum, makes for body control that’s fine at lower speeds but slightly fussy over an uneven surface, and that can get a bit choppy at a brisker clip. Handling is secure and as precise as it needs to be; which, because you’re never inclined to hurry this car along or feel even remotely encouraged by the wider driving experience, needn’t be all that precise.

Still, there’s little about the way this car navigates a corner, a junction or a busy supermarket car park that’s likely to offend you, or that you’re even likely to notice. And, on the latter score, that’s entirely as Honda intended. 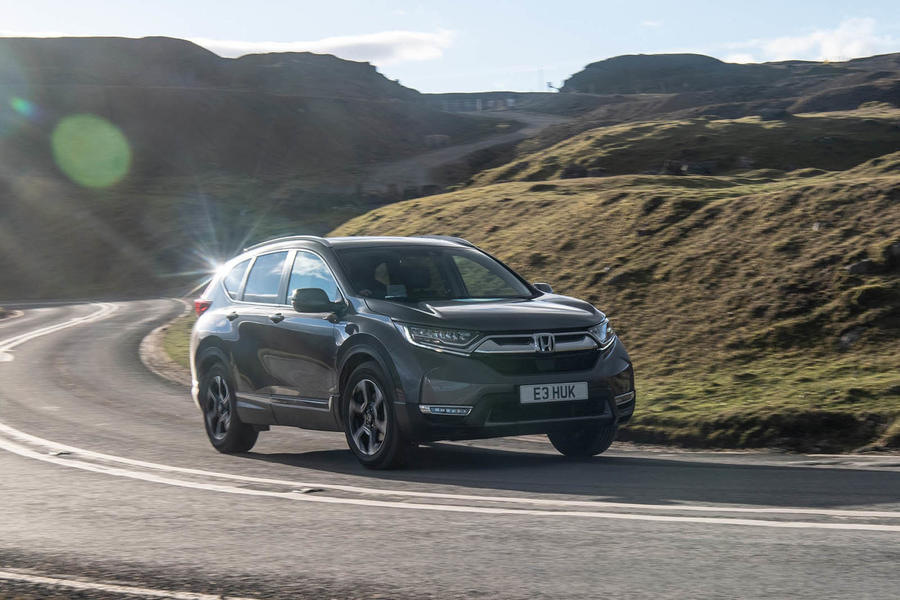 Honda CR-V customers must be a pretty steady, conservative bunch who like a sensible, rational, mature proposition. I heard a story about one such long-standing owner so worried about the various buttons on the dashboard of his car that he wouldn’t press any of them until he’d read about the function it performed, at length, in the driver’s handbook. These are people who like to know what they’re getting. And they’ll be getting exactly what they’re expecting in this car: nothing more, but not a shred less.

In a broader sense, though, there’s certainly enough roundedness, real-world efficiency and drivability about this powertrain to make the hybrid option the new CR-V of choice; to suggest it’ll work well in the other forthcoming Honda hybrid models into which it’ll be levered; and to make for a fine advert for taking your family motoring at the calmest, gentlest and most laid-back pace going.

If the last part of that equation sounds like it might suit you, don't let the £37,000 price tag of our test car put you off the idea: the entry-level front-driven version (which is more economical than the AWDer) starts from under £30k.

And if it doesn't sound like you? Then feel free to consider something more frivolous - but only once you’ve had a long, hard look at yourself in the mirror. 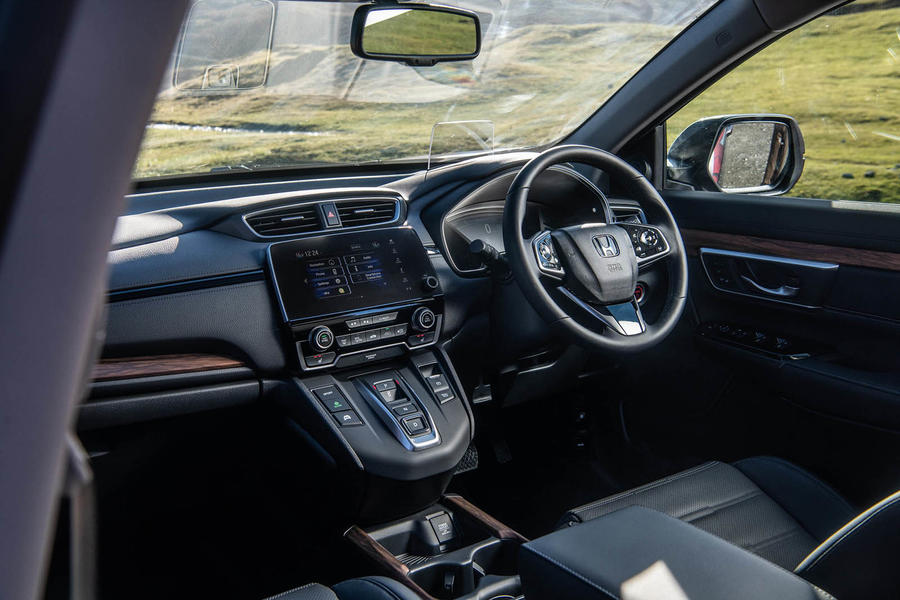 Why must Honda make such ugly

Why must Honda make such ugly cars?Just as I won't buy an ugly sofa however comfortable it may be, so I won't choose an ugly car whatever its other attributes.

Boring but not ugly

Why must Honda make such ugly cars?Just as I won't buy an ugly sofa however comfortable it may be, so I won't choose an ugly car whatever its other attributes.

You have seen the new rav4 ? If you want an example of truly awful take a look .

I love the approach Honda have taken with hybrid in this car, utilising the electric more for drive and the petrol engine more for charging; basically a range extender EV but with a tiny battery. It's a clever idea.

Sadly, this article used so much obfuscation that the clever way Honda have switched their view on hybrid tech is completely lost in the writer's attempt to appear clever.

Basically: good car, clever concept, will deliver exactly what's expected of it by its staple audience, badly positioned by the journalist. Might even make a good towing vehicle, if the electric motor torque is good.

Maximum towing 750kg which is

Maximum towing 750kg which is pathetic.

If you’re looking for a car

If you’re looking for a car that you want to keep, i.e the private buyer, you could do a lot worse than a Honda. They are so well engineered, priced well, will not (generally) break down, and as a hybrid make even more sense. Honda also future proof them by not making them too ‘digitally advanced’ so that they risk being outdated as the digital world continually develops. They may not be the most cutting edge, but that’s what makes them a safe bet for the private buyer in my opinion......