BACK TO ALL NEWS
Currently reading: Plug-in hybrid duel: Audi Q5 vs Volvo XC60
UP NEXT
Are e-scooters legal in the UK?

Audi and Volvo's latest hybrid SUVs mix plenty of space with less CO2, but how about performance? We bring the two together to find out
Share
Open gallery
Close
Share story

Is there anything more overtly ‘2019’ than a plug-in hybrid SUV? On a purely conceptual level, at least, they provide a compelling snapshot of both the prevailing and emerging trends in the wider motoring sphere.

Resplendent in Turbo Blue, the Audi Q5 55 TFSIe is the current class newbie. You’ll know the drill by now: comparatively low CO2 emissions will help it carry sway with tax-savvy fleet managers, while its boxy architecture should appeal to the classically family-minded buyers who helped catalyse the propagation of the SUV breed as a whole.

Only, it’s not quite that simple any more. Such a formula might have spurred the likes of the Mitsubishi Outlander PHEV on to sales greatness, but this new Q5 – one of more than 20 electrified Audis due to arrive by 2025 – has to satisfy a far broader remit. There are the above factors, of course, as well as the expectations of reasonable grandeur that come with an Audi badge and a £54,900 list price. But there’s also the small question of the 362bhp and 369lb ft developed by the partnership of its 2.0-litre EA888 engine and electric motor. Considering that allows for a hot-hatch-troubling 5.3sec 0-62mph time, that at least has to count as a mild performance streak.

This Audi has a fair bit to juggle, then. Not only has it got to be usable, economical and luxurious enough to justify its inflated asking price, but it also now seems there are grounds to expect trace amounts of dynamism and engagement from this 2030kg SUV. 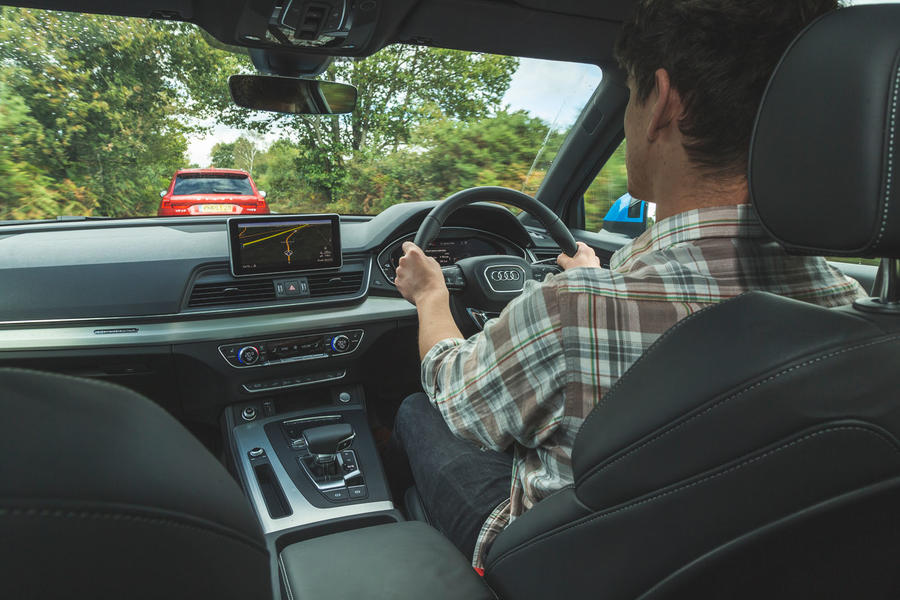 Gunning for similar territory is Volvo’s XC60 T8 Twin Engine. In £59,670 R-Design Pro guise, this newly updated plug-in SUV packs a smaller-capacity battery than the Audi (11.6kWh versus 14.1kWh) but offers a slightly greater electric range, according to WLTP testing procedures (29 miles versus 26 miles). And like the Audi, its official economy and CO2 numbers offer plenty of on-paper appeal.

But whereas the Audi’s electric motor is integrated into its seven-speed transmission and uses a separating clutch to feed drive torque into the quattro drivetrain in conjunction with the petrol engine, the Volvo’s two powerplants are totally separate. At its nose, there’s a 2.0-litre four-pot (turbocharged and supercharged, for good measure) with 299bhp and 218lb ft driving the front wheels. At the back, there’s an 87bhp electric motor with an additional 177lb ft of torque, driving the rears.

Well, that’s standard specification, at least. Software tweaks by Polestar Engineered take things a bit further in our test car. This £745 option lifts the petrol engine’s power and torque to 313bhp and 234lb ft and drops the 0-62mph time from 5.5sec to 5.4sec. Admittedly, the numbers attached to both cars do seem somewhat out of step with their underlying eco-friendly ethos, but they are at least fairly evenly matched in terms of straight-line performance. 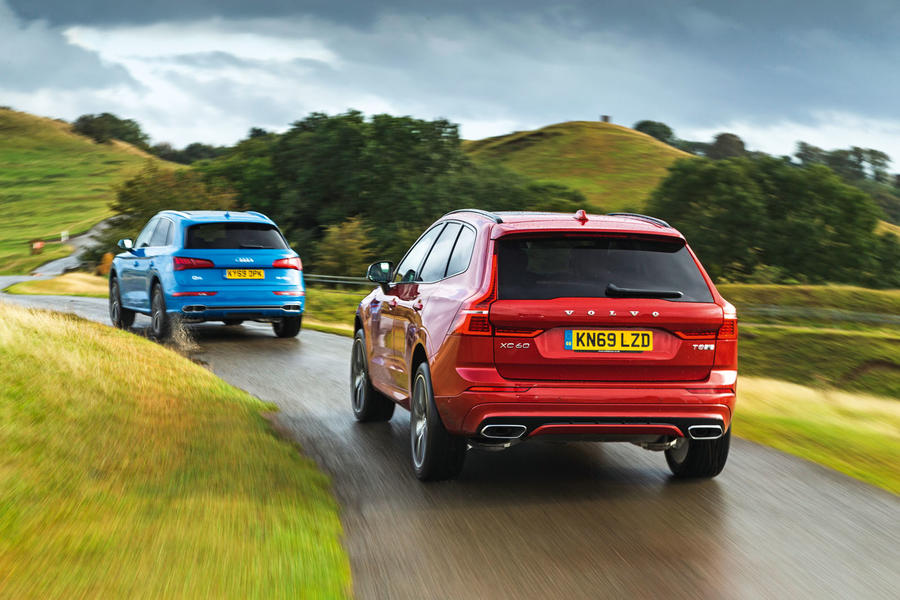 The differences begin to emerge when both are operating as conventional hybrids and their petrol engines are brought back into the mix. Here, the Audi begins to eke out an advantage. Step-off in both is smooth, but it’s the silken manner in which the Audi’s combustion engine sparks up and takes over proceedings when you delve deeper into the throttle pedal’s travel that allows it to nudge ahead. It’s not that the Volvo’s is uncouth, but it just happens to make you marginally more aware of its arrival.

There are two reasons for this. First, the Volvo’s petrol motor is louder than the Audi’s when you’re tooling about. It’s by no means deafening, and the noise itself isn’t actually too bad – there’s a very distant aggression to its throaty warble – but you hear it and are immediately aware of it.

The second reason is a shade more convoluted. Because the Volvo’s electric motor can’t summon quite as much torque as the Audi’s, the minor hesitation between action and reaction – between pressing the throttle and the car accelerating – feels slightly more exaggerated in the Volvo and that momentary lull also heightens your awareness of the point at which the petrol engine steps in. And because the Volvo’s powerplant doesn’t deliver acceleration in quite as linear a fashion as the Audi’s EA888 unit, the whole process just misses out on that final level of elegance. It’s still impressive, but the Q5 does it better. And you know what? The Audi also nudges ahead when you forget about nursing any remaining electric range and go for it.

On greasy roads, heavy acceleration will cause the Volvo to spin its front wheels as it struggles to put down the power from its petrol engine. The Q5, by contrast, just gets on with it. Both are impressively quick once moving, but be warned: lean too heavily on their petrol motors and fuel economy will plummet. On our test, once their batteries were drained – a feat that doesn’t take particularly long once you’re out of slow-moving inner-city confines – both cars were returning average fuel consumption figures that started with a two. 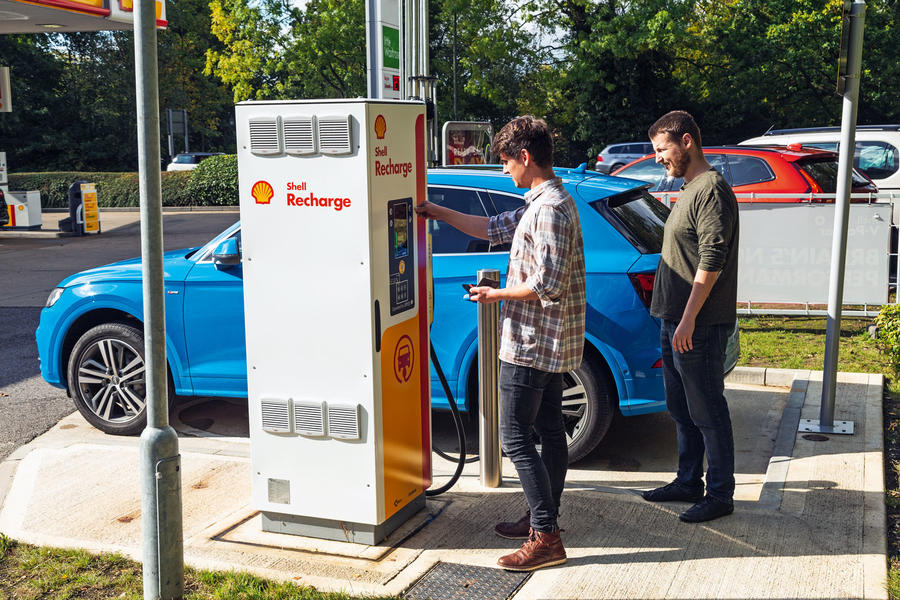 And although they can move very quickly in a straight line, neither is particularly rewarding in corners. Each has a lot of mass to manage and the threshold at which they’ll push into understeer isn’t particularly high. The Audi seems a touch more resilient in this respect, but it’s a marginal advantage at best. Both cars roll in a reasonably pronounced fashion and steering feel is largely absent, although the Audi’s slightly heavier rack does help inspire a modicum of additional confidence in its dynamic ability.

But even so, you quickly realise that these cars are at their best when driven in a more respectable fashion. On its adjustable air suspension, the Volvo has a pleasantly soft edge to its primary ride that’s only marginally compromised by its tendency to become animated on lumpier roads. Its smart-looking 21in alloy wheels are also pretty good at amplifying intrusions from ruts and bumps and they generate more road roar than the Audi’s 20in rims. On passively damped steel suspension, the Q5 feels firmer and more tied down, but this heightened level of assertion makes for a ride that feels more controlled than that of the Volvo. It might not be quite as soft-edged, but it’s no less comfortable.

Both cars look and feel superb inside, too. The Volvo’s cabin feels more lounge-like and ambient than the Audi’s, but the Q5 hits back with a level of technological cool and sophistication that lends it its own appealing aesthetic identity. From a visual and tactile perspective, both are impressive.

And from an overall perspective? Although neither car is particularly memorable when it comes to out-and-out dynamism, when viewed as refined, comfortable and quick premium plug-in hybrids, both cars impress in their own ways. But it’s the Audi that feels like the more cohesive, complete car in this test. That it’s considerably cheaper than the Volvo certainly helps its cause, but it’s the final level of polish, composure and sure-footedness that secures it the nod here. 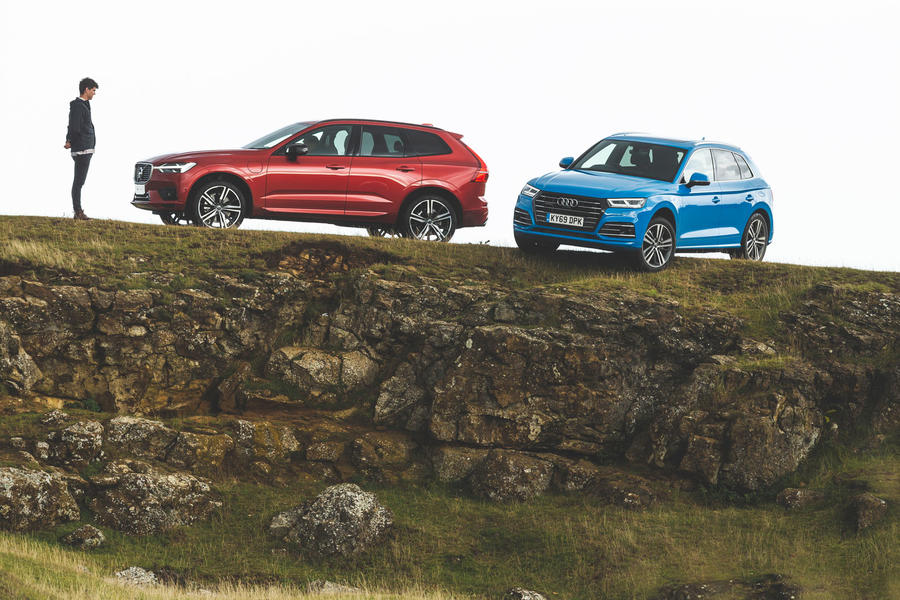 One benefit of a plug-in hybrid becomes apparent when you delve into how much it can save you in company car tax. The amount you pay in company car tax is based, in part, on how much CO2 said car emits, along with your personal income tax rate and the P11D value of the car. Because these cars emit comparatively little CO2, you stand to save a lot of money.

At present, the older NEDC emissions test is used to determine which emissions band a car fits into, although this will change on 6 April 2020, when the newer, more stringent WLTP test procedure is introduced. 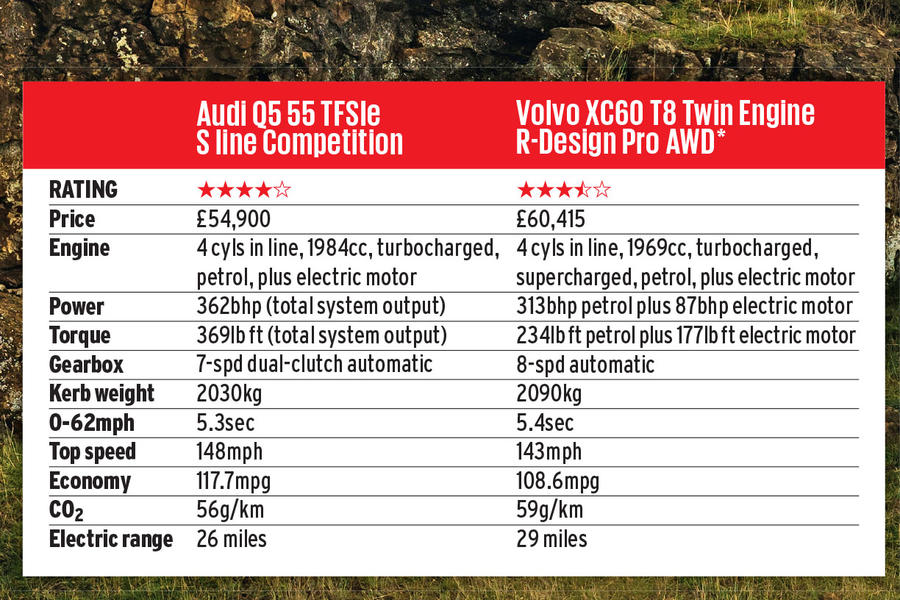 They would work well for me in a similar vein but unfortunately no one does a phev supermini or such that I can afford. But being local emissions free for my daily driving and then having hybrid performance and economy for other drives in a small family hatch would suit me down to the ground.

They would work well for me in a similar vein but unfortunately no one does a phev supermini or such that I can afford. But being local emissions free for my daily driving and then having hybrid performance and economy for other drives in a small family hatch would suit me down to the ground.

buying a car is getting mighty complicated

Electric; say Tesla 3 all the performance and on message but I just went away for a week and there were no convinient charging stations. Various mild hybrids; like the new 53 Mercs and JLR in line 6 that seem to fill in the torque curve to come close to a diesel but all the complexity does'nt seem to give you much more performance and adds more weight. Then these fuller hybrids that seem a bit crap to drive but in optimum conditions will save a few quid in fuel are on message for the environment. Still lurking are the big diesels like Merc and Audi offer that seem best all round but it looks like the market is moving away them from hurting depreciation. Finally sod it all get a v8 like the SVR F Pace or E63 Merc again they look like a depreciation nightmare.

usual pointless comments about fuel consumption, its of no importance, the only people running these will be on a company fuel card and don't need to care if its 5mpg. Autocar even tried to explain it in the article with a very good company car tax explanation.

Yes some people do use PHEVs as they can be to gain good economy, but not the buyers of these high powered ICE luxury models, they are wonderful, unashamed tax dodgers, and drivers stiffing one back to the taxman should be celebrated! so shut up about mpg already, if you need to worry about it, these vehicles were not made for you... move along.

Agree, like I said, regarding economy or environmentally friendly, these are not relevant as they are very much performance orientated, but phevs still interest me as a concept.
View all comments (12)