From £51,5508
Plug-in hybrid version of Range Rover Sport should win plenty of fans on pecuniary appeal. Drives well enough, although it isn’t the pick of the breed
Open gallery
Close

Land Rover’s new 2018-model-year Range Rover Sport plug-in hybrid is a car with a shelf life short enough to make unrefrigerated prawns look like a prudent Saturday morning market-stall purchase. A dodgy prawn will make you ill, of course – and an over-ripe Range Rover almost certainly won’t. And yet the analogy seems a fair reflection of the rapidly changing emissions testing landscape in which manufacturers like Land Rover are being challenged to survive at the moment.

According to Land Rover, this new P400e model has been available to buy since February. The reasons why Gaydon has waited until August to launch the car to the UK press haven’t been made clear, but they’re probably not as sinister as a cynic might expect of something with such a complicated powertrain. Pent-up demand for a tax-efficient non-diesel Range Rover Sport has been running high – or so says Land Rover – and the company has, until now, been so busy building customer cars that it hasn’t had a chance to make many for demonstration fleets. 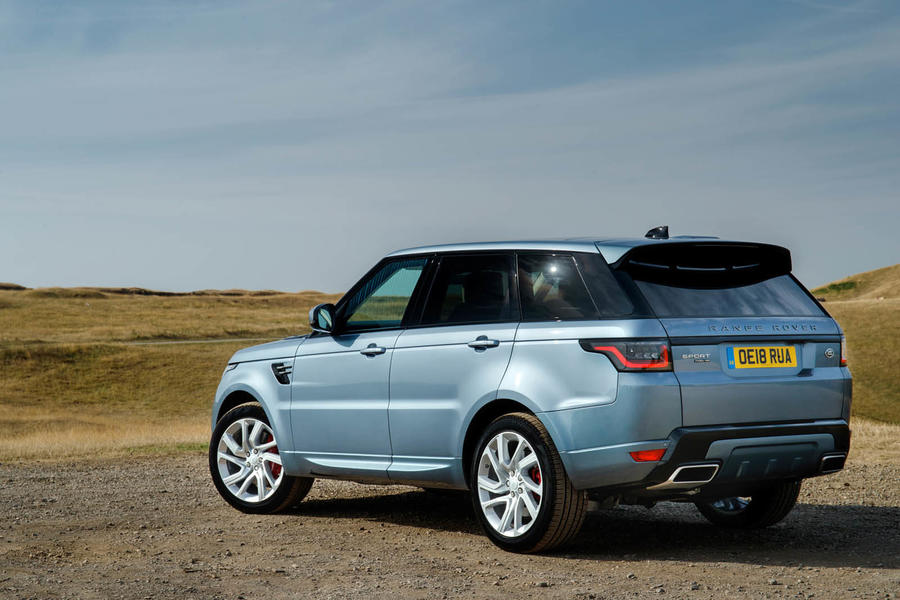 Which is fine in principal; we’d never quibble with the notion that paying customers are more important than road testers like us. Thing is, in the intervening six months between the start of production and now, this car has already been effectively replaced by a 2019 version with a more powerful electric motor and a few other equipment, trim and software revisions, certified under the new WLTP emissions regime. So it’s the ’19-model-year version you’d be putting a deposit against if you strode into your nearest Land Rover dealership tomorrow and ordered a brand-new, factory-built car – which are coming through onto driveways later this year. Knowing how expensive automotive product development is generally, that's mind-boggling, isn’t it? And yet only by moving this fast can the likes of Land Rover keep up with the current pace of change in emissions legislation.

The 2018-model-year version we’ve just tested was announced in the autumn of last year, and is the first Range Rover Sport with a plug-in hybrid derivative. And, much as you might assume it’s an impossible car to actually buy right now for the reasons we’ve just outlined, that’s not quite the case – with some examples available in dealer stock for those willing to seek them out, and a handful of nearly new ‘approved used’ ones around too.

Luckily for the purposes of the next few hundred words, we’re assured that the car bears a close enough resemblance to the 2019 version as to be worth forming our first impressions of the petrol-electric hybrid version of the Range Rover Sport. In one form or another, that hybrid is likely to remain a permanent fixture in the showroom range, as an increasing number of Land Rover’s customers become circumspect about diesel engines.

We’ve already reported on exactly this powertrain in our review of the bigger Range Rover P400e earlier this year. Unlike the diesel-electric Range Rover Sport ‘HEV’ hybrid, the P400e marries Land Rover’s 2.0-litre 296bhp turbocharged petrol Ingenium engine with a 114bhp, 203lb ft electric motor, the latter drawing its power from a 13.1kWh lithium ion drive battery. The electrified powertrain gubbins of some of the Land Rover’s key rivals (Audi Q7 e-tron, Porsche Cayenne E-Hybrid) can work a little harder and carry a little more electrical charge – although the 2019-model-year Range Rover Sport’s drive motor will move to 141bhp in order to address at least one half of that relative vulnerability. 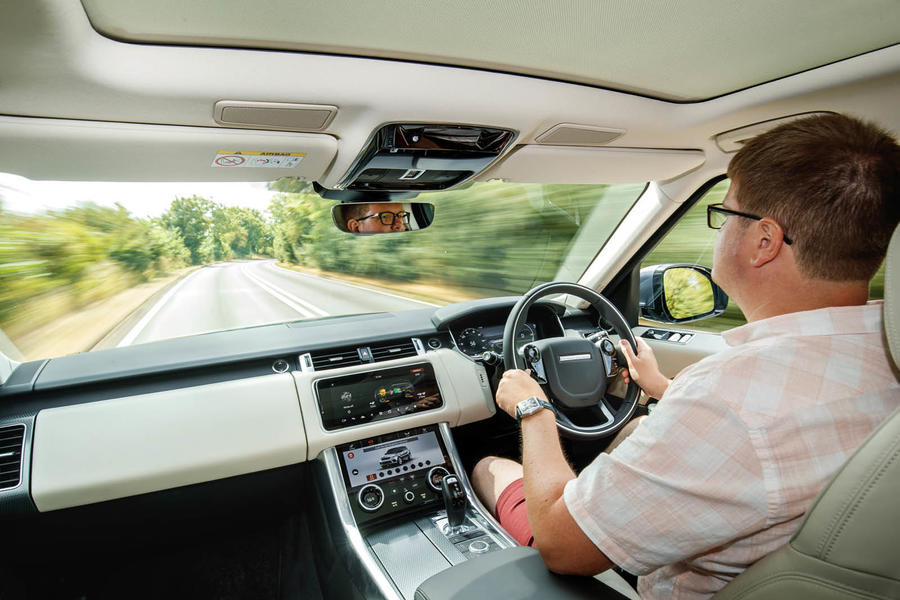 The car is very slightly less practical and capable than its rangemates in a couple of respects: it has a slightly raised boot floor and smaller maximum boot volume (because the drive batteries are carried where the spare wheel would otherwise be), and you can’t get a seven-seater version (although Land Rover reports that very few Sport owners bother with the ‘five-plus-two seat’ option anyway). The car has all the necessary drivetrain and suspension technology and clearance angles to wade, climb and descend like any other Range Rover Sport, but lags behind its rangemates on maximum towing weight (2.5 tonnes).

The Range Rover Sport’s interior has had a few material quality and equipment improvements in order to keep up with the luxury SUV class’s increasingly high standards on perceived quality and technological sophistication. Some of its switchgear now has a more expensive-looking chromed finish, although most of it remains as it was; and it stands up well enough to comparison with what you’ll find in an Audi Q7, Porsche Cayenne and Volvo XC90, without particularly standing out.

The big development is the adoption of the Velar’s ‘InControl Touch Pro Duo’ infotainment system, with its twin 10in touchscreens stacked one on top of the other. The system isn’t as intuitive to use as some, and doesn’t offer quite as much screen size either, leaving the line of shortcut ‘buttons’ you use to flip between menus at a slightly fiddly scale. It’s a worthwhile improvement for usability on what went before, though, and while it still doesn’t yet do proper Apple or Android smartphone mirroring, Land Rover says that’ll come before long.

The P400e has the increasingly familiar ‘parallel hybrid’ and zero-emissions ‘EV’ driving modes, as well as a ‘save’ mode that preserves the drive battery’s current state of charge. Our test drive suggested you’d be likely to see between 20 and 25 miles of electric range from a full battery charge depending on driving style, and then a real-world fuel economy return of 28-32mpg from the car in normal ‘hybrid’ running once the drive battery is empty. Unless you’re planning a lot of short-range commuting in the car, Land Rover will admit, an SD4 diesel would certainly be more economical – and an SDV6 might well be.

But neither diesel will match the P400e’s 6.3sec 0-62mph acceleration performance. The car feels at its most brisk when getting away from rest, the electric motor’s torque being most apparent through the lower intermediate gears. Roll-on performance isn’t quite as convincing; the car’s gearbox can be a bit unresponsive in selecting the optimum gear ratio during kickdown, and when you select a higher gear yourself and allow the powertrain to knuckle down from middling revs, you’re made more aware that there is more weight for the car’s hybrid powertrain to move here than in other Range Rover Sport derivatives, and less outright torque to move it with.

The P400e’s overall weight penalty compared with an SDV6 is just under 300kg. On a car weighing 2.5 tonnes overall, that’s not an impossible burden for the hybrid to carry – and the car’s well-rounded ride and handling bears testament to that.

There is perhaps a little bit more body roll here through bends, and marginally more head toss over uneven B-roads, than you’d find in a lighter sibling derivative, but at everyday speeds you’d be hard-pressed to notice either. By and large, this is a very comfortable-riding, dynamically secure and well-contained SUV. That it feels slightly larger, taller and more substantial on the road than some rivals is mostly to do with the fact that it’s a Range Rover – and that’s how Gaydon prefers to do things. None of the above makes it cumbersome or hard to guide.

The financial case for the car won’t be a difficult one to make for London urbanites or for shorter-range company car drivers. For the latter, although its purchase price is £5000 higher than that of an SDV6, it’d save a 40% tax payer more than £400 a month in benefit in kind tax compared with the V6 diesel; and for the former, the car goes free on the capital’s daily congestion charge. There won’t be a shortage of interest from people looking to take advantage of one or other of those facts – or quite possibly of both. 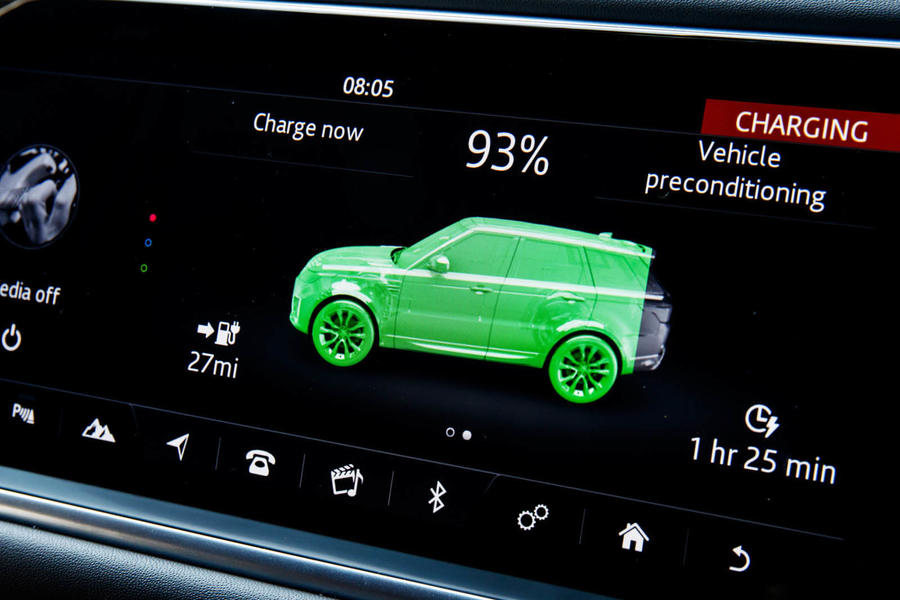 A more traditional Range Rover buyer interested in the aura of capability and strength exuded by this car will, I suspect, still prefer the sense of unconditional and effortless in-gear muscle possessed by the car’s multi-cylinder diesel powertrains – and I would too.

But I would also caution Land Rover that its current estimate for the portion of the long-term UK Range Rover Sport sales mix to be accounted for by the P400e (just 20%) might be a bit conservative. Because, after this car, the SDV6, the block-busting SVR and possibly the entry-level four-pot diesel, I can’t really see a need for more choice where motive power is concerned. The PHEV feels like it’s good enough to be here to stay. 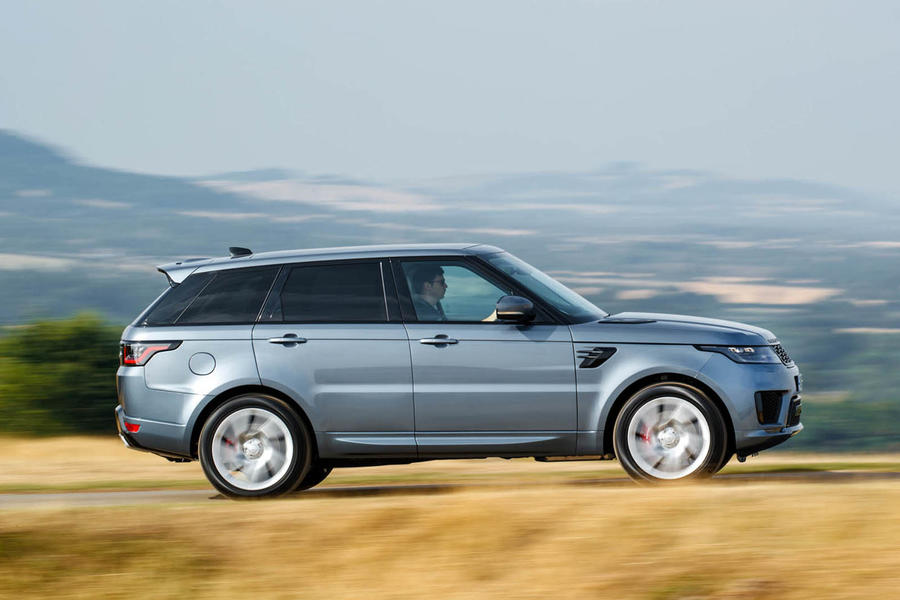 Roll up! Roll up! The most compromised FFRR is in town

But never mind, they've ticked a box and you've gotta pay for it (if you're stupid enough).

Weighs over 2,5 tonnes, has roly poly handling, but is named Sport!!  Well I guess, Sumo wrestling is sport, so why not the lardy RR Sport.P400e, :)