BACK TO ALL OPINION BLOGS
Currently reading: Bowler must keep its independent spirit
UP NEXT
Opinion: Why the Gordon Murray T50 could be a daily driver

Bowler must keep its independent spirit

Bowler has long had a good relationship with Land Rover, doing the things the carmaker can’t or hasn’t been interested in doing. Until recently it seemed to have made a decent enough living out of it too.

Instead I think Bowler reminded people just how capable Land Rovers are – via cross-country rallying or rally-raiding with cars that contain lots of JLR hardware – and basically did a lot of brand building for the grubby, durable, tough side of Land Rover. It added a welcome bit of hobnail boot to the half-suede brogue you’ll sometimes see at Gaydon.

Recently Autocar has had a go in the Land Rover Defender Challenge, a rally category that's run by Bowler with the manufacturer’s approval, and we’ve extensively driven the Bulldog, a bespoke car which includes a lot of JLR components and looks like, though really, really isn’t, a Defender.

In both instances we’ve been well impressed by the integrity of professionalism with which Bowler is run, and the depth of bespoke engineering involved, which also runs to Bowler’s aftermarket components to upgrade Land Rovers, or its good business of modifying and restoring older Land Rovers too.

To that end it’s easy to see how Bowler can fit within Land Rover’s Special Vehicle Operations. But I hope it doesn’t lose its independent, pioneering spirit after it’s integrated. 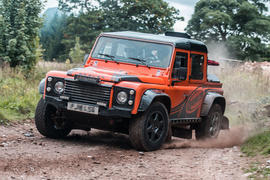 Late for class, yet again. No amount of apple giving to teacher, will get you out of detention.

It's being bought not to be secretly backed, it's going to be like AMG, ALPINA, a bespoke version of the regular model, why buy Bowler anyway?, what does Bowler bring to the party?, what does JLR think is missing from there portfolio?

WTF are you prattling on about now?!?!  JLR(TATA) have bought a business in administration that used LR components and imagery. As stated in the article, it will promote the capabilities of the core technologies and offset the Chelsea Tractor tag.

It's as far away from Alpina and AMG as it could be, when was the last time you saw a C63 yomping through a forest?!? muppet.

Nobody forced Bowler to sell to JLR? So where does "Bowler must keep its independent spirit" come from? They just willingly sold it muppet!

Its not Matt who has lost the plot

Bois9119  its not Matt who has lost the plot his point on JLR purchase of Bowler are valid.   Bowler were in admistaration so did not willingly sell they had no say in the matter.

Please use what grey matter you have to think before posting and not just jump to conclusions.

If they do a race series of these cars, will they call it a Bowler Derby?