BACK TO ALL NEWS
Currently reading: Dirt in our eyes: Cross-country rallying in a Bowler Defender Challenge
UP NEXT
2024 Mercedes C-Class EV spearheads brand's electric rebirth

Bowler's Defender-based racer is a mighty brute, but can it handle the most gruelling type of motorsport?
Open gallery
Close

This place isn’t for the ‘half a turn more left damper’ types. Bovington Camp is where the Heavy Branch of the Machine Gun Corps acquainted itself with Somme-bound Mark I tanks during the First World War – the rhomboid monsters whose crew shared the cabin with a noxious 16-litre Daimler-Knight straight six.

On typical race tracks, in typical racing cars, and on more typical days, you might make a mental note of the corrugation on the way into a corner. Muddy, mogul-blighted Bovington is to that corrugation what getting kicked in the face is to an Indian head massage. As an arena for motorsport, its style is much more ‘new dampers please’.

We’re competing in round four of the six-event British Cross Country Championship. It’s a weekend of cross-country rallying: sign-on and scrutineering on Friday, seven laps of a five-mile course on Saturday then a further five laps on Sunday. Lowest overall time wins. The course is so attritional that almost a third of the cars won’t finish, and already I’ve doubts about the terrifically thuggish number 55 car: a hacked-up, jacked-up old Renault Clio with a mid-mounted Jaguar V8. 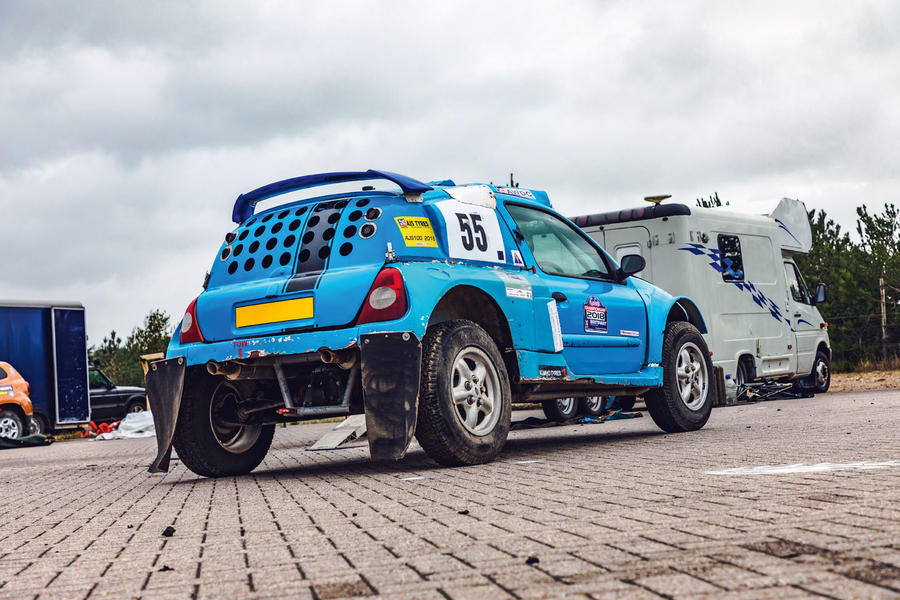 It isn’t alone. At times the makeshift service park feels like the oil refinery in Mad Max 2. There are modified Defender pick-ups stripped almost to the bone and open-wheel Can-Am buggies whose 1.0-litre turbo engines spit the hyperactive, long-travel suspension over torn terrain like a daddy longlegs fired from a blowgun. People speak with some awe about the Lofthouse, a similar idea to the Can-Ams but with a 450bhp BMW S54 engine and just 1200kg to hold it back. You can buy a basic Lofthouse chassis for around £15,000 or they’ll build you a turn-key version for quite a bit more. With several classes to compete in, though, it’s possible to field a competitive BXCC car for as little as £5000. And now that traditional rallying is so expensive, that’s a big part of the appeal.

We’re here with Bowler. You’ll know Bowler from the Wildcat and other worldclass Land Rover-based off-road specials. But the Derbyshire company also uses the BXCC as a jump-off point for customers with their sights trained on longer, tougher, more exotic events such as the six-day Rallye du Maroc and the Dakar, now moving to Saudi Arabia, because learning how not to smash up your hardware in Dorset and Dumfries, and in a relatively modest £60,000 Defender Challenge, is preferable to learning on sand dunes several thousand miles from home.

As sales director and ex-Honda man Charlie Davis explains, it’s at the BXCC that those customers also learn to embrace the unpredictability of rally-raid racing and to remain determined when it doesn’t quite go to plan. With Bowler you’ll pay around £2500 for a two-day arrive-and-drive event like this one at Bovington, but when the competition takes place abroad, customers not only tend to own the car but the support costs also rocket. You’ll have a team of spanners prepared to bang your £160,000 Bowler Bulldog V8 back in shape while you sleep. Davis’s message is therefore simple: know what you’re letting yourself in for. 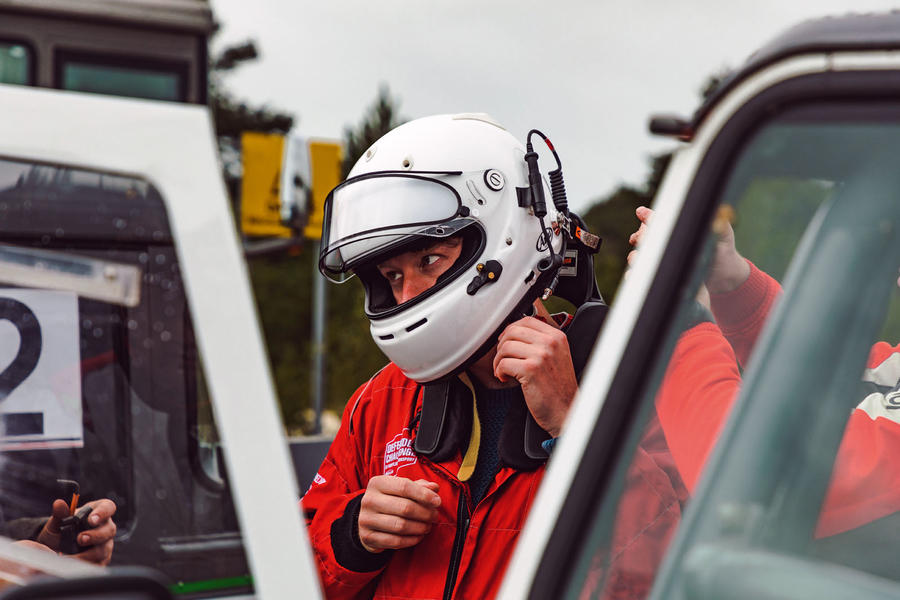 Would I have known. The parade lap on Saturday morning smashes home the fact this is the furthest I’ve ever been outside my comfort zone on four wheels. Even at pedestrian speeds the brutality of the lumps and the vertigo-inducing chutes that plunge our Defender through narrow sections of forest induce considerable anxiety. I wonder whether I’m going to get hurt or be quick enough to avoid embarrassment, although I couldn’t tell you which feels more important right now. In the passenger seat John Tomley mentally logs the course in detail and will shortly regurgitate it at speed, but he also offers advice: be committed with the throttle but don’t over-do the steering. Get a wheel on the berms that will form so you don’t clonk the diffs. Don’t get cocky or you’ll roll it.

‘Roll it’. We should talk about the car. If something as honest and likeable as Bowler’s Defender Challenge can have a dirty secret, it’s that they like to roll over. Or go to sleep, as the mechanics put it. Rolling a Challenge is easy and presumably quite unpleasant, though it’s unlikely to end your weekend because injury is rare and, assuming you weren’t carrying delirious speed, once set right these Defenders tend to plod on. Still, as someone with claustrophobic inclinations, the idea of hanging upside down in a five-point harness, far away from the nearest marshal’s post, doesn’t fill me with wonder.

Tomley’s instructions are at least incredibly precise. Even on our first breathless lap the Welshman reliably communicates three snippets of information: the rough angle of the corner, its direction and finally the distance to the next bend. ‘Ninety-right-thirty’ means you have some work to do; ‘thirty-left’ followed by silence means foot flat as you dare. On our first lap that isn’t very flat at all. There’s clearly grip to be found because our all-terrain tyres determinedly haul the Bowler’s nose through slower corners, but through the quicker bends I have no frame of reference. On the mud, or gravel, or the muddy gravel, I can’t tell whether we’re laughably slow or millimetres of throttle from the six o’clock news. 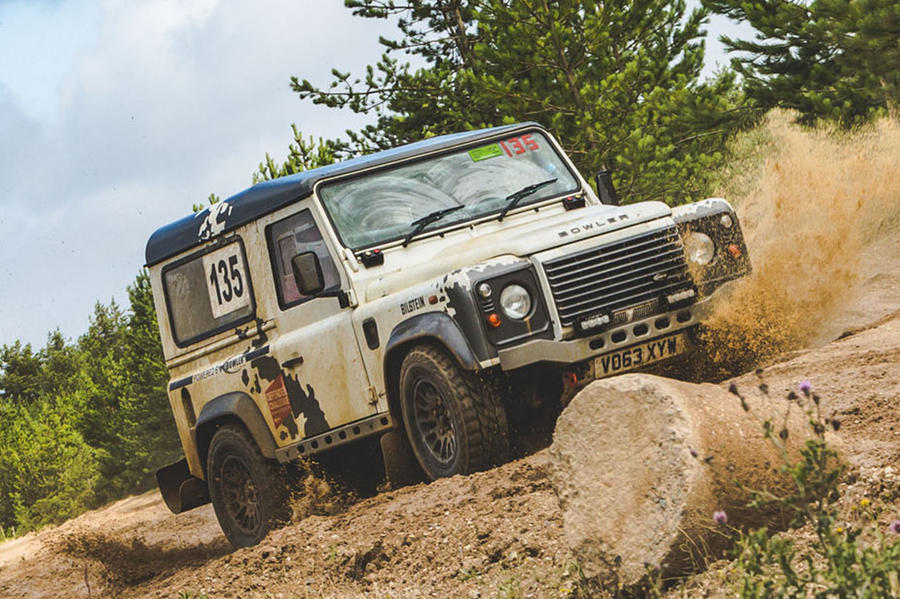 At the end of the lap I’m also tired. Shattered, in fact. This evening I’ll look in the mirror and see burst eye capillaries, and weeks later the tendons in my hands will still be sore. The lumps are trickiest, because while the Bowler’s upgraded Bilsteins do a sensational job absorbing impacts, you’ve got to pace it perfectly to quickly cross Bovington’s hideous mogul fields. Too fast over mogul one and you’re airborne. You then lightly brush mogul two and have just enough time to congratulate yourself on your new-found Loeb-esque talent before crunching head-on into mogul three, which is invariably the largest. I’ve had the wind knocked out of me four or five times this lap, and so therefore has John. My risk-assessing frontal lobe is also gently smoking because I feel as though I’ve just retaken my hazard awareness test while tripping on acid. The surface of the track shifts constantly and there’s simply so much to hit. On conventional race tracks it’s imperative you don’t fixate on the Armco if you lose control because – idiots that humans are – you’ll gravitate towards it. At Bovington, nature’s Armco, plus the odd MoD digger, is everywhere, and it makes for tense progress.

But the lap times do fall. The first foray takes around 12 fraught minutes, but thereafter our times cluster around 10min 25sec, which is, says Davis when Tomley and I head back to base for a breather, decently competitive. This has little to do with my skill and a lot to do with my initial ‘flight’ response evolving into ‘fight’. 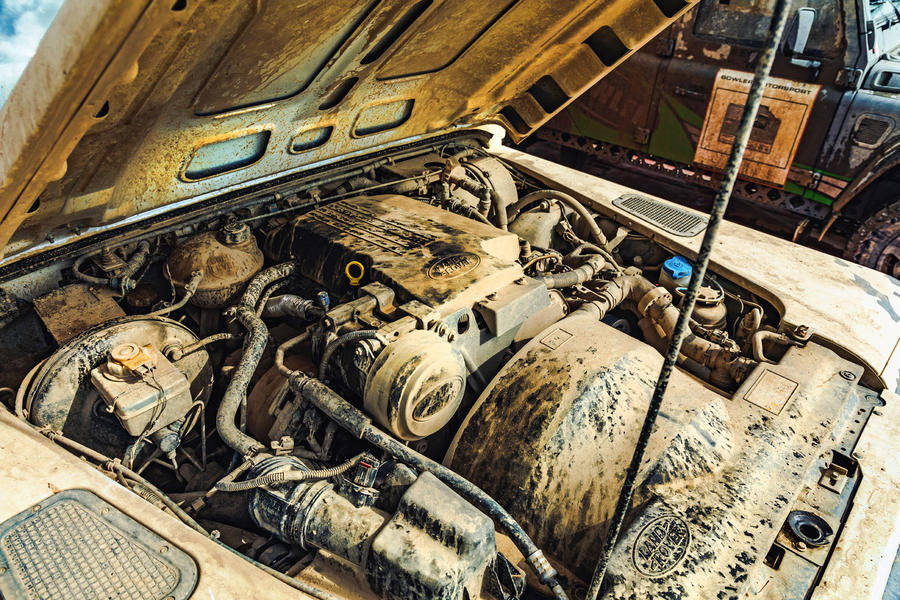 It’s a rapid transformation once you’re comfortable with the format and machinery, because for all the toil, racing a Bowler Defender in the BXCC is ludicrously good fun. Like Hyacinth the hippo ballerina from Disney’s Fantasia, at times the Challenge operates with genuinely confounding grace, ditch-hooking wickedly through NCP-spec hairpins but deftly sliding through fourth-gear, you’ve-made-your-bed sweepers. Equally, it’ll slump into mid-corner oversteer quite recklessly given half a chance. The unmodified steering is loose and you need to factor in a delay for direction changes because the momentum of 1750kg will drag the front axle forwards before the tyres find any bite. You therefore need to drive pre-emptively, especially at speed, aligning the caged A-pillars with the inside of bends then folding the nose in as early as you dare, sometimes with a careful lift for extra rotation. It’s most fun when it gets edgy, but there aren’t many problems you can’t solve with the immediate application of torque, and the braking is phenomenal given the Challenge’s weight. All in, it’s the off-road equivalent to driving a Caterham Seven on track, which is to say you can be both fast and flamboyant. It’s addictive, heart-pounding stuff.

Next morning cometh the lesson. Sunday school, if you like. Electrical hiccups mean the 2.2-litre turbodiesel keeps cutting out. When it does, Tomley hits the kill switch and we fire the car back up, sometimes without stopping at all, then attempt to salvage the lap. It feels futile, so frustration has me over-driving and mistakes creep in. Cutting a corner punts the chassis onto its outside wheels and whites-of-our-eyes close to toppling over. One lap later, I abruptly French-kiss a concrete bollard. Bowler’s mechanics George and Pat will excavate the bodywork using a tilt-trailer and ratchet strap, but I wish they hadn’t had to. We also lose our left rear damper, the back axle thereafter po-going like a hyperactive child. Staying cool when your hardware is on the blink and you’ve lost your rhythm isn’t easy, but that’s why we’re here, isn’t it? Finishing for good around lunchtime, we’ve drifted from a mid-field overall finish to the back of the pack but have at least brought the car home in one piece.

What an enlightening weekend. Having always considered myself more of a ‘half-turn’ type, the endorphin rush that lingers into Monday suggests I may actually be more of the ‘new dampers’ persuasion. I love that every second on the course is risk versus reward, and that such an unlikely race car expresses itself so readily. And, of course, there’s the human element, which comes to the fore when things go south. Bowler and the BXCC: epic, fulfilling fun, and only the first proper rung on the rally-raid ladder. 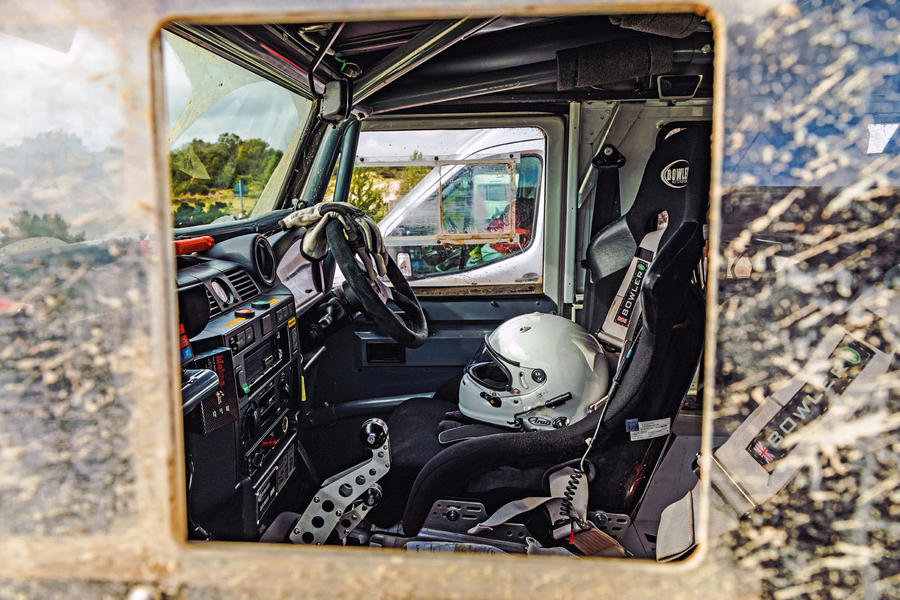 Bowler’s take on a club racer Defender has been around since 2014 and once formed the basis of a one-make series designed to get people hooked on rough-and-tumble motorsport. The modifications are relatively light to keep costs low, but on a course like Bovington the combined effect is profound. It’s an amazingly agile thing given its roots, if nervous at times because the 88in wheelbase is so short relative to the high centre of gravity. As co-driver Tomley says, don’t get cocky.

Fast? Ish. The 2.2-litre turbodiesel Ford Transit engine is remapped to 170bhp and 332lb ft, which is quite enough to sustain speed, and our car also has a limited-slip diff at the rear. Otherwise it’s a standard driveline with a 50/50 torque split, although the lever for the five-speed gearbox is fitted with a useful extension. Inside there are also racing buckets and a roll cage, but if you’ve ever owned a Defender, you’ll feel right at home. A smaller steering wheel is welcome, even if the upright driving position can seem truly precarious when you’re going for it through forest sections.

The chassis gets the bulk of the work: Bowler fits Bilstein dampers and stiffer springs and anti-roll bars, plus lightweight 18in wheels. And with full works support there are spares for everything.

Can we have a new Defender versus old Defender challenge?

Don't leave us hanging - how did the Clio get on?

Clio did pretty well in the

Clio did pretty well in the end, finishing just behind the really serious stuff, I think. Clearly with the BXCC you disregard that sort of thing at your peril…