BACK TO ALL NEWS
Currently reading: Volkswagen ID R sports car to pioneer secret battery tech
UP NEXT
Hyundai i10 EV successor primed for 2024 launch

Volkswagen is planning an advanced new electric sports car that is earmarked to act as a figurehead for a limited range of performance-based ID R road cars and is set to go into production by the middle of the decade.

The new headlining Volkswagen model has been conceived as both a coupé and roadster, according to highly placed Volkswagen sources, and will be based on the German car maker’s skateboard-style MEB platform – the same integrated structure that also underpins the ID 3 hatchback. It has been suggested that the ID R could compete against the second-generation Tesla Roadster, if an internal ID sub-brand strategy paper calling for the proposed model to be assembled at the company’s Karmann offshoot comes to fruition.

The MEB platform offers the versatility to house both front- and rear-mounted electric motors and is described as the perfect starting point for the new sports car, giving Volkswagen engineers the scope to develop it with the choice of up to three different layouts with either front-, rear- or four-wheel drive.

In range-topping form, the new two-seater or 2+2 would benefit from a twin-motor set-up similar to that adopted by the soon to be unveiled ID 4 SUV, not only providing the Volkswagen Group with an electric ID R performance flagship but also potentially forming the basis of a proposed electrically powered successor to the combustion-engined Audi TT. 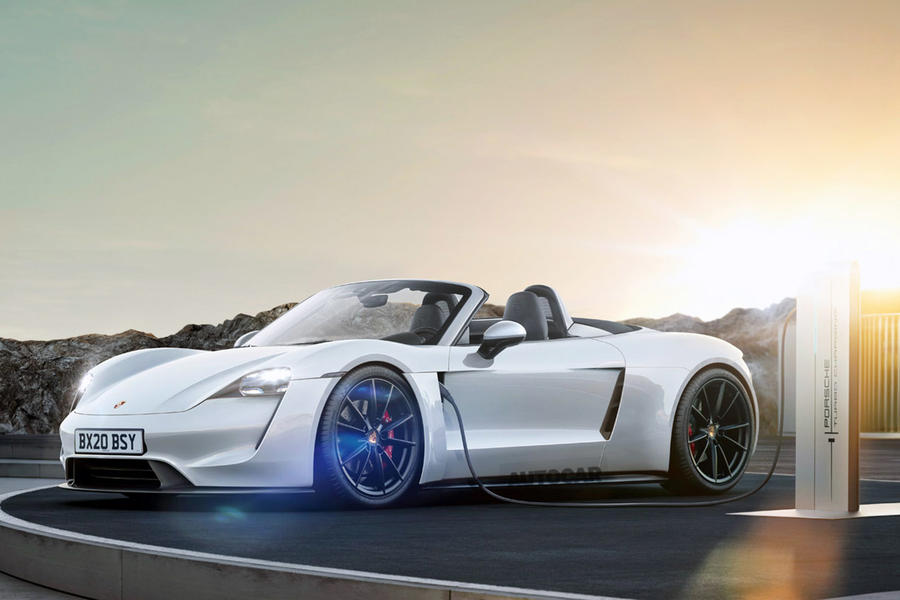 As Autocar reported last year, sister brand Porsche is developing an all-electric Boxster. While that model is thought to be based on either the Porsche Taycan’s PPE platform or an adapted version of the existing combustion engine platform, it’s possible the Stuttgart brand could make use of the MEB platform to create a sibling to the ID sports car.

A series of design study models already exists for the car at Volkswagen’s headquarters in Wolfsburg. It has been earmarked to pioneer the use of what the company’s motorsport director, Sven Smeets, describes as a “new performance-based battery” being developed in-house at the German car maker for future ID R road cars.

“We are beginning to work on the first batteries for the performance road cars, using the dedicated team from the ID R, so there will be a direct link between them,” said Smeets. “The batteries start in the same area. At the moment we’re finalising the performance parameters of the batteries.”

While shrouded in secrecy, Volkswagen’s performance road car battery is said to use a different chemical process to that employed by the ID 3. It is also said to adopt a new cell-to-pack architecture for greater efficiency and packaging benefits.

Speaking about the possibilities open to the German car maker in the development of performance batteries for road cars, Jost Capito, head of Volkswagen’s R performance car division, said: “We have different cells and ways of building and all the technical learnings from motorsport. There are different demands on a performance car than a road car, and we’re looking at all aspects to see what we can do with the technology. We’ve seen how it works in the ID R and now we want to see how it looks in a road car.”

The news of Volkswagen’s plans comes swiftly after the unveiling of the four-wheel-drive electric Golf eR1.

Although not directly pointing to any future production model, the eR1 is, in Volkswagen’s own words, “an ambassador for future performance cars for Volkswagen’s R division”.

A range of ID R performance variants would sit above the ID GTX range in the same way the combustion-engined R models sit above the GTI today. Autocar first confirmed earlier this year that the GTX branding would initially be used on a hot version of the ID 4 SUV, before rolling out across ID models.

Is an electric car is

Are they dangerous? Is any car dangerous? - Not particularly more so than an ICE vehicle - unless you try and wade one!

How many volts per pseudo manufacturer?