BACK TO ALL NEWS
Currently reading: New Volkswagen Golf GTD previewed ahead of Geneva debut
UP NEXT
Ford backs call for European ban on new ICE cars from 2035

Warm hatch will feature the cleanest, most efficient and most powerful diesel engine yet fitted to a Golf
Open gallery
Close

Volkswagen has confirmed that the GTD version of its new Golf will make its debut at the Geneva motor show next month.

The new Golf GTD has been officially unveiled – see it here

The front end of the diesel-powered warm hatchback, previewed in an official rendering, looks to feature broadly similar styling to the standard Golf, but it will gain a distinctive light pattern in its lower grille, like the plug-in hybrid GTE.

Volkswagen claims the powertrain in the new GTD is "the most powerful and, thanks to twin-dosing, cleanest turbo diesel injection engine ever to be installed in a Golf".

It's set to offer enhanced performance, reduced emissions and improved efficiency over the previous GTD, which made 181bhp and 280lb ft of torque. We know it will use a variant of Volkswagen's well-established 2.0-litre diesel engine with mild hybrid technology.

The official confirmation follows the inadvertent publication of the GTD's 197bhp output and the news that three more hot Golf models are set to appear throughout 2020.

Likely appearing alongside the GTD at Geneva, the new GTI follows the plug-in hybrid GTE, revealed last year, and will be joined by a high-performance GTI TCR variant and a range-topping R.

A slideshow - which appears to have come from a brand or dealer presentation - confirms the GTI's previously reported power output of 241bhp (converted from the kW figure). That's the same output as the GTE. It also shows a TCR variant (which may be badged something else) with an output of 296bhp. 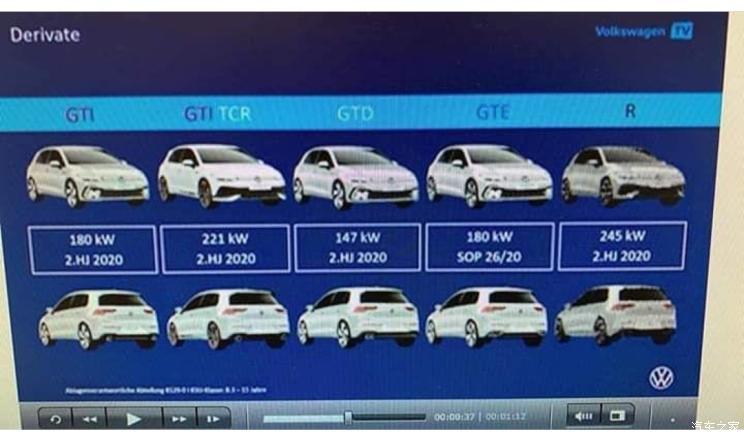 The R will head up the range with an apparent output of 329bhp - a 33bhp increase on the outgoing car.

End-of-the-line seventh-generation Golf GTI is fast, precise and assured on track, but hasn’t got the attitude to usurp the hot hatch class’s most exciting front-drivers

Following the reveal of the GTI and GTD at Geneva motor show, the R version is expected to be shown in July at the Goodwood Festival of Speed.

The transformation from regular Golf to GTI is likely to be as subtly handled as previous variants. It will include the usual dual-exit tailpipes, red brake calipers, chunky air intakes and a bodykit extending around the lower portion of the car.

In a reversal of original plans, Wolfsburg has decided not to make a more radical switch to hybrid power. Instead, the eighth-generation Golf GTI is set to stick with much of the hardware that has made the seventh-generation model such a success, both critically and commercially.

That means an updated version of the Audi-developed EA888 2.0-litre turbocharged petrol engine used in the existing Mk7 Golf GTI. Again, like the current car, it will be offered with two power outputs: a standard output of 241bhp and a more powerful 296bhp model, which will replace the MK7 Performance version.

Although it was previously thought that the latter variant would wear the TCR badge, VW's decision to leave the racing series as part of its plans to end all combustion-engined motorsport means it's possible the car will use the Clubsport name instead.

An increase in torque beyond the 258lb ft and 273lb ft of today’s two versions of the GTI is claimed to establish new levels of performance. In the case of the higher-spec model, it is said the 0-62mph time will be less than six seconds and the top speed 155mph. Gearbox choices will include carry-over versions of today’s six-speed manual and seven-speed dual-clutch automatic items.

As recently as late 2018, VW had planned to switch the Golf GTI to mild hybrid power as the performance flagship of a new range of IQ-badged petrol-electric mild hybrid models.

That system is also based around the EA888 engine. However, it will not be used on the Golf GTI, under the instruction of VW Group chairman Herbert Diess, who reversed the decision of his predecessor, Matthias Müller.

The original plan had been to improve the Golf GTI’s low-end response with electric boosting. Additionally, the technology was to bring a coasting function that idles the engine on a trailing throttle and a recuperation system that harvests kinetic energy during braking. However, VW’s about-turn on hybrid technology should lead to the new GTI having a similar character to today’s car.

The new Golf GTI is underpinned by a further-developed version of the existing model’s MQB platform, using a MacPherson strut front and multi-link rear suspension in combination with adaptive damping control.

Engineers involved in the new car’s development say a lot of attention has been focused on steering accuracy. The electro-mechanical set-up of the outgoing model has been heavily reworked to provide added levels of feedback and a more direct ratio.

Buyers will be restricted to just one bodystyle: a five-door hatchback. The three-door will no longer be produced. Changes inside include a new digital instrument cluster with an optional head-up display unit, plus new switchgear, including a centre console featuring a stubby T-shaped gear selector for DSG-equipped versions.

The new GTI is also expected to follow the mainstream model and get a technical overhaul. Most significantly, this includes the integration of a new, larger infotainement screen that will have some touch functionality, but also a new tactile control system designed to make the most common control adjustments easier.

GTE, GTD and R variants: what do we know so far?

A performance increase for the GTI is necessary to ensure that it occupies a performance level above the new GTE, revealed at the same time as the standard Golf.

That model's 241bhp comes from a 1.4-litre turbo petrol engine combined with an electric motor, with a lower-powered 201bhp variant expected at a later date. It makes use of a 13kWh battery that allows up to 43 miles of zero-emissions range, and can be taken up to 87mph without any assistance from the engine. Performance figures are yet to be detailed, however, as are economy figures.

The R is again likely to use a heavily boosted EA888 motor with at least 300bhp in entry-level form, mated to four-wheel drive. Insiders suggest a range-topping R Plus is still on the cards, albeit with around 350bhp rather than the previously rumoured 400bhp.

"the cleanest, most efficient and most powerful diesel engine yet fitted to a Golf"
The software guys have been doing a lot of extra time.
typos1 22 January 2020

Seeing as its likely to be

Seeing as its likely to be the last GTD they could have given it a bit of a last hurah by using the 237bhp twin turbo engine.

Seeing as its likely to be the last GTD they could have given it a bit of a last hurah by using the 237bhp twin turbo engine.

Agreed but it would cause too much heat for the GTI as it would have more torque. I really don't like the rear of this new Golf - VW pestered me to try and change to the 8 when it does come out but I am glad I stuck with my 7 GTD as it's a much better looking car in my opinion.

Will anyone pay over £40k for a Golf?

I'm not sure why the TCR won't just be sold as the standard, and solitary, GTi because 241bhp is fairly pitiful for a performance car in this class nowadays and smacks of some of the underpowered engine options available for the Mk4 GTi. By all means, have the 241bhp powertrain in the Golf, but as an option for the rest of the standard Golf range. And if anyone wants a sport offering on 241bhp, spec the R-Line trim.

As for the R Plus, I still wonder whether that will actually appear as not only will it tread on the toes of the Audi RS3 with the VW Group but will anyone pay that much for a Golf? The (now previous) R wasn't far off the S3's price at over £35k. Will anyone pay over £40k for a Golf? Even if it's got the power and performance to take on its rivals, the A45 AMG and RS3?

My feelings also Saucerer, 241bhp in the GTI seems a little wannabe GTI and the TCR is where I would expect the GTI to sit. To put the 241bhp into perspective here in the USA we can buy Toyota Camry 301bhp and Honda Accord 255bhp and they are total mainstream, vanilla sedans. And we won't even get the TCR! Outgoing Golf R was $42k here in the USA and they had to work hard to move them even with limited supply so I agree pushing the price point on the R will only appeal to die-hard enthusiasts. That's RS3 money with a superior 4wd system?
View all comments (24)