BACK TO ALL NEWS
Currently reading: From ink to I-Pace: How Jaguar designs an electric car
UP NEXT
BMW opens door to M1-inspired electric supercar

From ink to I-Pace: How Jaguar designs an electric car

We chat to Gaydon’s design directors about where things are headed, before picking up a pen and having a go ourselves
Open gallery
Close

The Jaguar I-Pace hardly looks out of place sitting centre-stage at London’s high-ceilinged, sparsely furnished Design Museum, which seems a strange thing to say about a five-seat SUV in the wake of an acclaimed temporary exhibition that saw the most spectacular Ferrari cars of all time gathered at the Kensington venue.

But it’s not just any premium SUV, as its designers are all too keen to point out.

Although it’s well over a year and a half since Coventry’s electric pioneer first broke cover, it’s still being touted as the beginning of a design revolution that will soon bring us a Porsche Taycan-rivalling XJ, before being extended to a line of radical saloon, performance and high-riding models. We’ve seen glimpses of what’s to come in the form of the aborted C-X75 sports car and the recently revealed Gran Turismo virtual concept, but, following the departure of legendary designer Ian Callum and the opening of JLR’s £600m technology centre, talk is turning to where the company will find inspiration for its upcoming production EVs.

Happily, Jaguar’s top sketchers believe electric vehicles could give automotive designers more freedom than ever before. Although the Jaguar Jaguar F-Type and C-X75 won critical acclaim for their subtly striking lines and purposeful stances, they were still sketched according to the fundamental principles of sports car design. As their side profiles clearly show, the ‘horse and cart’, and ‘horse in cart’ shapes lie at their foundation, and Callum’s team of stylists were constrained by the aerodynamic, ergonomic and legislative principles that come with that.

The I-Pace, however, was “a chance to start afresh',' according to chief creative exterior designer Dominic Najafi, who adds that its conception was about “being open-minded and saying: ‘what does electrification give us?’”

A lot, as it turns out. Alister Whelan, Jaguar’s chief interior designer, calls the I-Pace “a blueprint for the future”. “It’s already been out for 18 months,” he says, “so if we’ve created it now, the future could be even more exciting for us.” He adds: “We just need to be careful that we appeal to all our customers and give them choice, but the electric platform and what we’ve started with the I-Pace could open up lots of potentials.”

Let’s not forget that Gaydon beat its Stuttgart, Ingolstadt and Munich rivals to the punch with a stylish electric SUV at a time when its standing in the hotly contested premium segment was under intense scrutiny. A premium electric SUV that’s consistently proved its dynamic and practical worth in Autocar’s road trips, reviews and group tests, no less. So it seems only fitting that the I-Pace has yet to find its way off the red carpet; it wasn’t just Jaguar’s first step into a new segment, it was our first taste of a model category that’s likely to become the industry’s most popular and influential in the coming years.

The designers are keen to stress that, although the I-Pace is very much “still a Jaguar”, it forms part of a bold strategy, Najafi says, to “make everything as progressive as possible”. There’s hints of past models there, for sure, but the I-Pace’s stylists’ overarching brief was not: “make it look like a C-X75 SUV”.

As we learn in a fast-paced design masterclass, the I-Pace is an embodiment of Jaguar’s ambition to make each of its models “the most dramatic cars in their segment”. The SUV is assisted in this endeavour by a cab-forward stance reminiscent of track-focused, mid-engined supercars, short overhangs, prominent rear haunches, thin pillars and heavily accentuated character lines. That’s not to mention the sheer amount of work that went into shaping the model’s spats, dog leg, light catcher, tumblehome and obscuration band…

Unfortunately, Autocar was unable to do justice to the I-Pace’s pleasing stance and silhouette when it came to our turn to pick up the pen. Not even the best efforts of Jaguar’s most talented designers could prevent our interpretation of Callum’s landmark EV from turning into a shoddily crafted caricature of a London bus. It was interesting, nonetheless, to see how a Jaguar, literally, ‘takes shape’.

Start at the bottom. The wheels (hilariously oversized for a concept, naturally) go on the page first, followed by a dramatically angled character line, A-pillar, beltline and rocker, or sill. Before thinking about arches and door shuts, it’s a good idea to get the DLO (that’s ‘daylight opening’) in place, as this is one of the I-Pace’s defining features, and tacking on the easily recognisable rear spoiler and light cluster.

Move to the front, and, with the addition of a jutting chin, gaping lower grille and kinked headlight design, the I-Pace begins to appear. It’s not until the reflective ‘light catcher’ and drooping bonnet are added, though, that it starts to become recognisable as a production car, rather than a space-age design study. Carefully apply some definition to the rear arches and wheel spokes, and, unless you have the artistic inclination of a brick (guilty), your 396bhp EV will start to come alive. 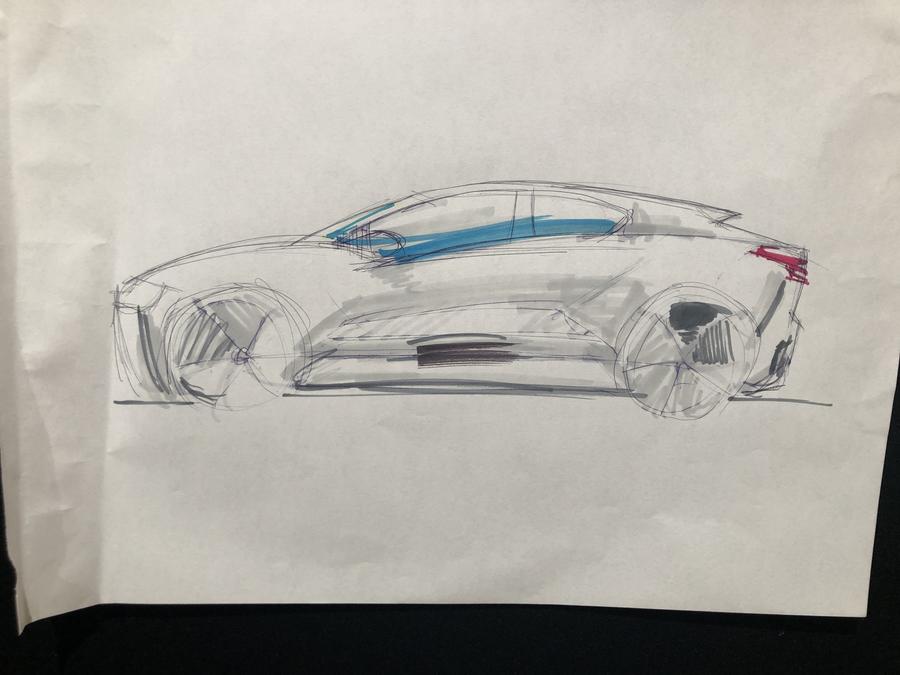 Fortunately, a gaggle of professionals was on hand to show us how it’s really done, using a digital design programme to create a photo-real I-Pace side profile from scratch in less than 15 minutes. Perhaps it helps that the car has become so recognisable, but it’s also probably got a lot to do with the fact that, as Najafi and Whelan remind us several times, “Jaguars are all about making memories”, meaning that the shape of this 18-month-old car springs to mind as easily as even the original Mini and Beetle.

I-Pace sketches reviewed, we were given free reign to recreate a car of our choosing using the methods dictated to us earlier. Others plumped for E-Types, Defenders, Mk1 Golf GTIs - us? We chose a Peugeot 405 Estate, obviously. Though it’s worth noting that, after the session, with our drawing proudly tacked to the wall, we nodded politely when several automotive experts confidently guessed it was a Renault 4 TL. Nobody show Pininfarina.

Later, we hear how augmented reality was an integral part of the I-Pace’s design programme, and how the techniques developed helped to create the Vision Gran Turismo Coupe concept, revealed last week as a playable model in the latest instalment of the Gran Turismo racing videogame. Najafi says: “That car is a result of setting aside any production limitations, we just tried to create an ultimate vision of Jaguar - a Jaguar that embodies everything we believe.”

And it’s not hard to see what he means. While there are obvious design references to Jaguar sports cars of old (think D-Type, E-Type and even F-Type), the sleek two-seater is brought bang up to date with a 1000bhp electric powertrain, a holographic dashboard mascot and augmented reality window displays. There’s no word on which aspects, if any, will make production, but Whelan is confident that we’ll “see some really cool new tech coming soon”.

“What we really like about the way JLR develops technology,” he tells us, “is that we need to use technology to enable our design, so we need to not have ‘technology for technology’s sake’.” So, although the concept might seem a wild departure, not just from Jaguar’s current product range, but from reality in general, there’s definitely potential for some of its defining characteristics to make their way into showrooms in the future. For now, though, it seems more likely that we’ll see Jaguar models adopt technology such as the Range Rover Evoque’s Clearsight Ground View, a newly developed 3D head-up display and red light-avoiding speed monitoring software.

“Everything has to be enhancing the brand experience, not gimmicky,” Whelan tells us. The Jaguar design studio seems to take pride in not what it can do, but in what it can help Jaguar drivers do, and the I-Pace is doing a fine job as a design, technology and engineering flagship for that school of thought.

On a charge: Driving the Jaguar I-Pace from London to Frankfurt

Thought were now living in a digital world? Designers don't use ink anymore, they start sketching on their monitors using photo-shop & 3D modelling using Alias Autostudio instead of clay. The only people that still use ink are probably the older designers like Ian Callum & Gerry McGovern.