BACK TO ALL NEWS
Currently reading: 1959 Morris Mini-Minor road test - Throwback Thursday
UP NEXT
MST Mk1: Is this the ultimate rally recreation?

Our first drive in the original Mini, badged as the Morris Mini-Minor, came in August 1959. Did we see any indication of the iconic status it would achieve?
Open gallery
Close

Iconic is a frightfully overused word, but when applied to the Mini, it's one that's truly apt.

The car is the epitome of British popular culture throughout the 1960s and 1970s, going through various updates and guises. Production finally ended in 2000, and its fame continues beyond.

The Mini, unlike BMW’s modern-day interpretation, fitted its billing, and arrived with much fanfare in August 1959, under the names Austin Seven and Morris Mini-Minor, the latter of which Autocar road-tested on the 28th of that month in de luxe specification.

Editor at the time, Maurice A. Smith (DFC), introduced the magazine thusly: “Earlier in the year – in April – we were very happy to be able to describe and test a new British small car from the ordinary and, in many respects, a major step forward. Now, following the Triumph Herald, a second outstanding and original small car design has emerged, this time from the British Motor Corporation.

“This 850cc design, the work of Mr. Alec Issigonis and his team, bristles with originality, yet there is nothing remotely freakish about it. Whether they be engineers or laymen, those who examine this car are unanimous as to the good common sense and ingenuity built into them.

“The road test will gladden many hearts for it gives promise.

“There is good reason to believe that these new cars will be able to better even the remarkable records of the two small car series after which they are named. Perhaps it is appropriate at this time of launching to wish good luck and Godspeed to the new models, and to all who work on them and drive in them.” The ‘gladdening’ road test was certainly complimentary of the £378 10s motor.

“Throwing convention to the winds often produces freaks in the automobile world, but when done by a clever and imaginative designer, the result may be outstanding,” we said. “This is certainly the case with the Morris Mini-Minor, which was found to set new standards of comfort and road worthiness in the very small family car class.”

Such comments go to show just how bloated modern motors have become, when you consider that something considered a family car when it was designed not even 60 years ago is now dwarfed to an almost comical degree by even the smallest of city cars.

“When one is standing beside the car it appears low and small, 10in wheels accentuating this effect. Inside, however, it is found that there is as much space, or more, than in larger cars.”

This was due to the Mini’s innovative design: “With the 847cc 4-cylinder engine set across the nose, and beneath it the entire transmission for driving the front wheels, nearly 80 percent of the car’s overall length of 10ft is made available for passenger and luggage accommodations. Head and elbow room are adequate for both front and rear seat passengers. The rear seat is wide enough for two adults and a small child on shorter journeys.”

Our road testers also complimented the driving position for comfort and visibility, and said the unusually erect steering was easy to get used to. 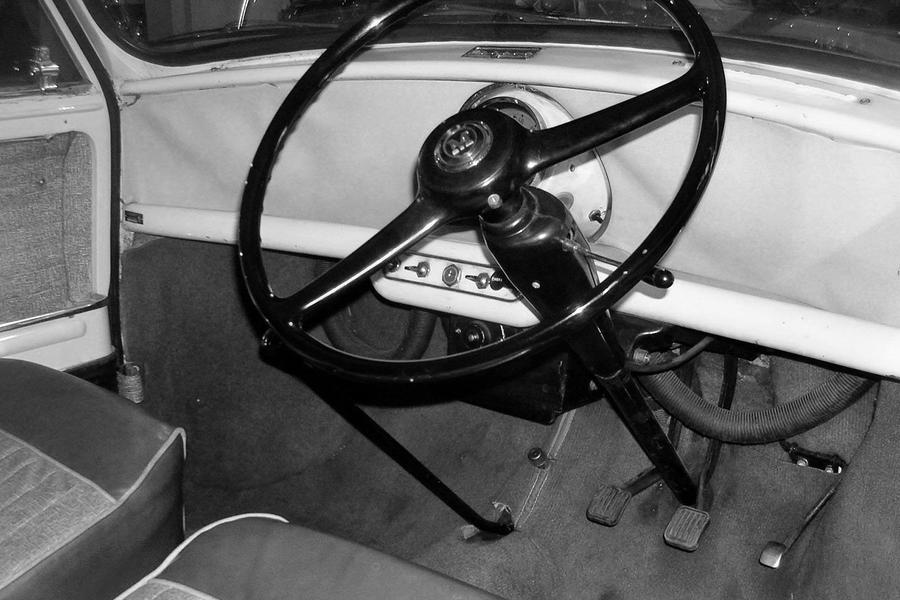 Although the “very long” gearstick was stiff and awkwardly positioned, it was decent to use: “The clutch is light and sweet and, in fact, the whole transmission feels as smooth as in a good conventional front-engined, rear-drive car.”

The Mini’s light weight proved advantageous with regards to power, with livelier performance than the slightly bigger-engined Morris Minor 1000.

“The engine peaks at higher revs, namely 5500rpm, and it is smooth throughout the range,” we said. “It is also quiet up to 55mph in top gear but noisier than at the natural cruising gait of 60mph, when the fan can be heard also."

“Throttle response is so immediate, and the engine so willing to rev freely, that is often necessary to restrain it from exceeding the chosen speed,” we continued, commenting that the flexible engine "showed no distress even at its top speed of just over 70mph." 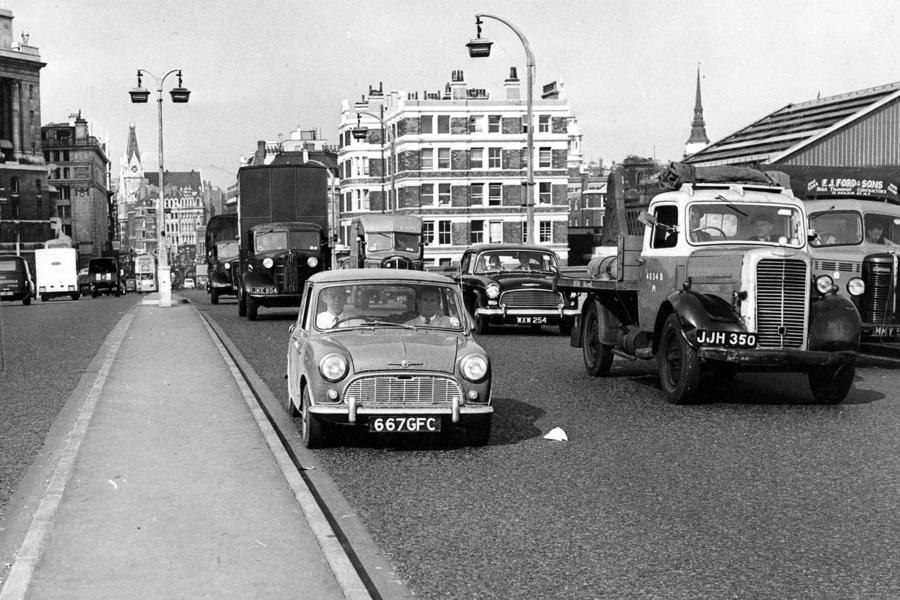 Such was the success of the design that a normal man would not find any difference in driving between the Mini and a regular rear-driven car, we believed, saying: “It has its wheels at the extremities, and, together with an all-independent suspension system employing rubber as the springing medium, this has brought about a very high level of stability and road holding.”

We even somewhat foreshadowed the Mini’s future motorsport popularity. “When fast cornering is indulged in, the behaviour is clear cut and predictable and the car plays no tricks,” we said, also noting that roll was negligible.

It was comfortable for passengers, too: “Riding comfort is very good indeed. Irregularities of British main roads are effectively absorbed and damped at any speed,” and although sometimes noisy, we found the Mini to “ride poor surfaces very well”.

Another success for the Mini was its “smooth and progressive” drum brakes with “ample power,” which Autocar’s testers could not make significantly fade.

With regards to owning, signs were good. Fuel economy worked out at 40.1mpg, or 34.8mpg in heavy traffic ­– impressive for such a car at the time.

The boot was a mild letdown, though, as we considered it to be “a little small in comparison with the space allotted to passengers”, although more items could be carried by opening the boot’s downward-hinged lid and held in using the built-in cable, while various storage in the passenger area was also impressive. 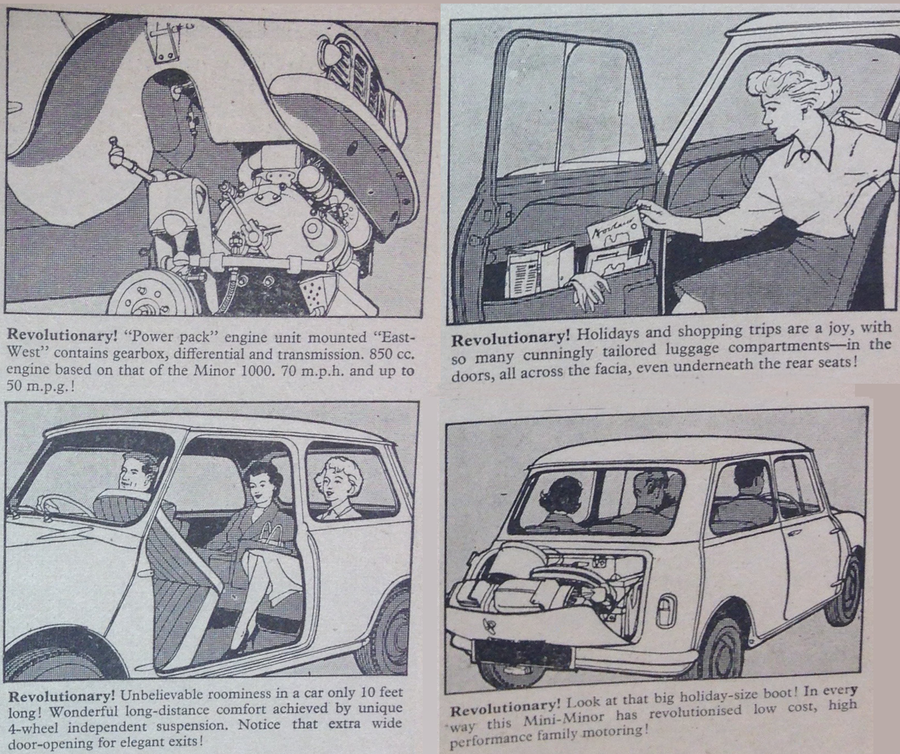 The sliding windows were also not quite up to scratch. Although their aperture was “just enough for the driver to get his head through and ample enough for hand signals”, they were “difficult to engage”. Some other rattles were also detected in the bodywork.

Maintenance would also not be too troublesome, Autocar reckoned, with “generally good under-bonnet accessibility”, and “a common oil reservoir for gearbox and transmission”.

The only caveats were the 16 greasing points on the chassis, which required attention every 1000 miles, the lack of a tool kit, and that “some of the fibre trim panels are flimsy and insecurely fixed,” and that “the carpet is not secured to floor and is likely to become ruckled and easily worn”.

In conclusion, we were rather gushing about the Austin Seven / Morris Mini-Minor, saying: “The manufacturers are to be congratulated on producing, at a truly competitive price, an outstanding car providing unusual body space for its size, and one in which four persons can enjoy comfortable, safe and economical motoring. It is far from being an underpowered miniature, and has a very lively performance; it is certain to interest the sporting motorist because of its fine handling qualities. It scores in heavy traffic on account of its size, and its minimum overhang, front and rear, makes parking an easy matter in congested cities.”

My Dad a great motoring enthusiast and country doctor who did a high mileage bought the first one delivered by his old rallying mate Morris dealer. I was thirteen at the time. My big brothers quickly found what a great car it was. I remember a trip with the late Tim Fry with them to the local town where four big young fellows got out and the locals all came over and looked and commented the tyres will melt ! It leaked like a sieve and the front mounted distributor meant it stopped when it rained. My old man quickly adopted a large surgical glove to fit over the cap ! Tim a Routes apprentice worked out the fan which made a Hoover like sound had harmonics and got a set of 17 blade fans made as he and his friends all had one very quickly, they discovered the hand brake turn immediately ! as well . Later BMC fitted a sixteen blade fan, apparently easier to make . Nice memories thanks. Ralph .
Andrew Lee 5 January 2017

Ford soon realised that the Mini was making no profit for BMC. They even offered to increase the price of their Anglia to match a more expensive Mini. But BMC didn't want to know and Ford waited 'til the supermini class had been created before producing the Fiesta. Issigonis was a genius but no economist!
Greenracer 5 January 2017

It's no use applying modern

It's no use applying modern thinking to cars of the past. They were of their time. I never worried about getting into a mini and learnt to drive in one. Later owning a couple and enjoying the sheer fun you could have in them. When you look at what was available in those days, things like Triumph Heralds, Ford Anglias etc....the mini was a breath of fresh air.
View all comments (4)