BACK TO ALL NEWS
Currently reading: Mercedes EQ S to be flagship in £9bn electric model blitz
UP NEXT
2025 Volkswagen ID 1 is Spanish-built, £17,000 entry EV

Mercedes-Benz bosses have approved a €10 billion (£9bn) programme to launch more than 130 electrified variants within the next seven years, spearheaded by the upcoming EQ S luxury saloon.

The plan – which involves an extended range of mild hybrids, plug-in hybrids, battery EVs and hydrogen- fuelled models – was tabled at a recent board meeting of Mercedes’ parent company Daimler and received the backing of chairman Dieter Zetsche.

The goal of the massive project is to give Mercedes an unparalleled range of premium electrified models, which will help to significantly reduce the company’s average fleet emissions ahead of a series of increasingly strict EU CO2 emission regulations starting from 2021.

Mercedes has already confirmed the first three models in the full-electric EQ range. It will begin with the recently unveiled EQ C SUV. This will be followed by a production version of the EQ A hatchback concept seen at last year’s Frankfurt motor show. 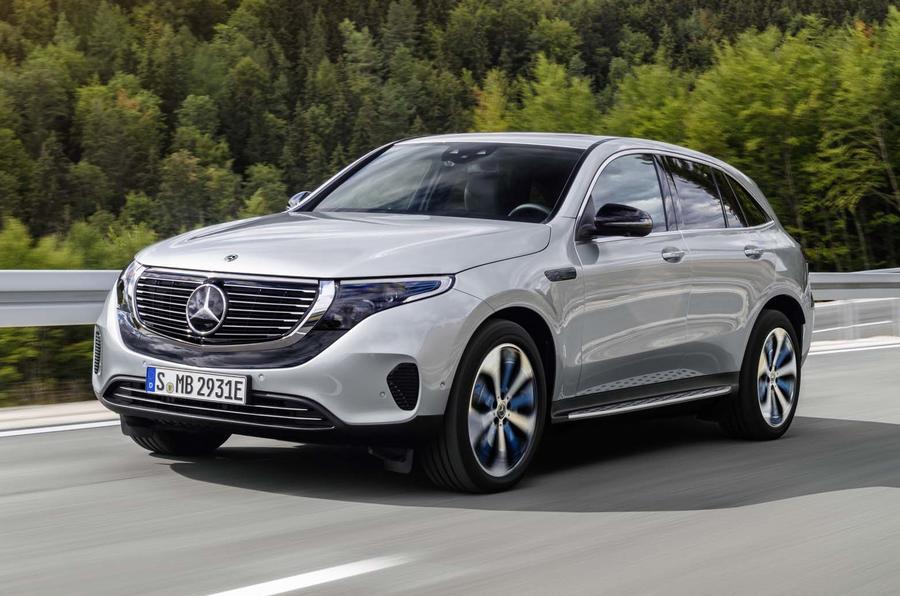 Those two models will then be joined in 2020 by the upmarket EQ S, which was spotted testing in early prototype guise at Mercedes’ engineering HQ in Stuttgart, Germany, recently. As its name suggests, the Tesla Model S and Porsche Taycan rival will offer a similar level of luxury, comfort and features to the traditional Mercedes-Benz S-Class saloon.

Whereas the EQ C and EQ A are based on modified Mercedes-Benz GLC and Mercedes-Benz A-Class platforms – known internally as MEA1 and MEA1.5 – respectively, the EQ S will use a dedicated EV platform.

Named MEA2, the new platform makes heavy use of aluminium and is designed with a fully flat floor, as is common with many EV-only designs. This has allowed Mercedes to give the EQ S different proportions from the Mercedes-Benz E-Class and S-Class, between which it will sit in size.

The EQ S will be a similar size to the current Mercedes-Benz CLS. It will feature a shorter bonnet and ultra-short overhangs, which, company insiders say, contribute to “a whole new dimension in interior packaging”.

The spy shots also show that the EQ S has a heavily raked windscreen compared with the Mercedes-Benz C-Class, which combined with the shorter overhangs should give the model greater interior space. The roofline echoesthe design of the latest CLS, although secrecy surrounds the rear of the new model, which was completely hidden on the prototype cars.

The EQ S is expected to be powered by twin electric motors – one on each axle – giving permanent four-wheel drive. A similar set-up in the EQ C delivers 402bhp and 564lb ft of torque. 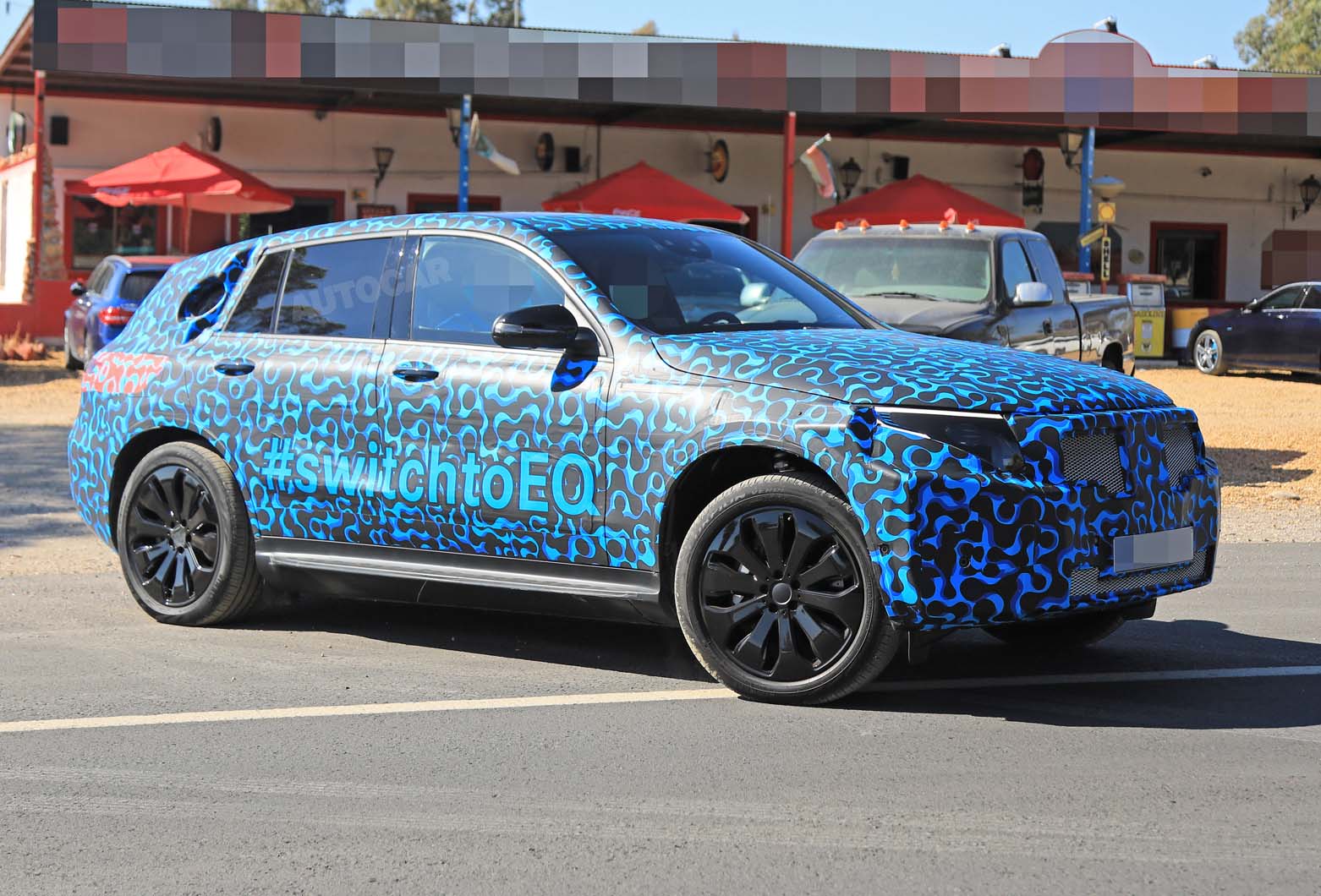 Although the production version of the EQ C has now been revealed, deliveries of the first fully-electric Mercedes are not expected to begin until June 2019. The SUV has a kerb weight of 2425kg and it will initially feature an 80kWh lithium ion battery – around 10kWh less than the battery in the Jaguar I-Pace.

Although these are the only three EQ models confirmed to be going on sale by 2022, the firm has committed to 10 pure EVs in the longer term. According to well-placed sources within Mercedes, the second wave of EQ models is currently in the conceptual stages of design.

These include a compact four-door Tesla Model 3 rival based around the recently unveiled A-Class saloon, a compact SUV similar in size to the GLB due in 2019 and a flagship electric sports car from the Mercedes-AMG performance division.

Although none of the next wave of EQ models has advanced to committed project status yet, Autocar has been told that Mercedes is proceeding with plans to launch all of them by the end of the second stage of its electrification plan in 2025.

The final component in the currently planned EQ product range is the GLC Fuel Cell, which will be offered on a limited lease basis later this year. It is based around the standard GLC and uses a fuel cell stack, hydrogen tank, lithium ion battery and plug-in charging for a zero-emission range of about 310 miles.

While the dedicated EQ models will offer the biggest reduction in fleet average emissions, the board has also approved a broad-based hybridisation strategy that will include “well over 100” variants by the end of 2022. Under the plan, existing models will be offered with the choice of mild-hybrid EQ Boost or plug-in hybrid EQ Power drivetrains.

Mercedes has already launched a limited number of new-generation mild-hybrid EQ Boost models. Each features a 48V electrical system and integrated starter motor capable of providing electrical boosting qualities under acceleration. Such systems are available on models that include the E-Class and CLS.

Difficulties in sourcing lithium ion batteries for the new-generation plug-in hybrid, due to production bottlenecks at Daimler subsidiary Deutsche Accumotive, has held back the introduction of EQ Power models. Initially revealed at the Geneva motor show in March and set for launch this year, the C300e, C300de, E300e and E300de EQ Power plug-in hybrids are now not planned to reach UK dealers until 2019.

Following these new plug-in hybrids into Mercedes showrooms next year will be the A250e 4Matic and B250e 4Matic EQ Power.

Both use a fourth-generation hybrid system in which the electric motor sits within the rear axle and provides drive exclusively to the rear wheels. As in standard A-Class and B-Class models, though, the front wheels are powered by a combustion engine, in the form of the Renault-sourced 1.3-litre four-cylinder used in the A200.

Another model included in the EQ Power line-up is AMG’s upcoming 1000bhp-plus Project One hypercar. Despite being revealed at last year’s Frankfurt motor show alongside the EQ A hatchback concept, it is not planned for UK delivery until 2019.

Mercedes’ split electrification strategy and brands can also be seen in its current motorsport programmes. Its 2018 Formula 1 car, in which Lewis Hamilton is leading the championship, is officially titled the W09 EQ Power+ to reflect its hybrid powertrain. It will also run a works squad – labelled the Mercedes-Benz EQ Team – in the all-electric Formula E from the 2019/2020 season onwards.

What the Mercedes EQ C will have to beat:

This large SUV can’t match traditionally powered rivals for ride and build quality but impresses for its cleverness, pace and interior space. Tesla is developing a Model Y small SUV.

Jaguar’s first EV has beaten the Tesla Model S in an Autocar twin test. It’s both an excellent EV and one of the best Jaguars in years. The I-Pace features 394bhp and a 90kWh lithium ion battery.

The E-tron had been due to launch this month but ‘organisational issues’ have delayed it until mid-September. It’s built on the VW Group’s MLB platform and should have a 248-mile range.

Shown in concept form at the Beijing motor show this year, the iX3 is set to produce more than 270bhp, with a 70kWh battery giving a 248-mile range. It will be BMW’s third pure EV.

EQ S ... finally a really decent if not too original design. Maybe they borrowed from KIA a top designer? Point is, this will finally attract buyers from its looks rather than its emblem/ Still think the overhang (safety regs??) is OTT and should be at least 3 inches shorter at the front

Mercedes £9 Billion investment does show the UK government spending £106 million of our money on EV tech to be pretty irrelavent, being just over 1% of one German companies investment into EVs for the next few years

Lemmings or 'by popular demand'?

MOT was changed this year so as to be tighter on diesel emissions so good luck keeping that running economically.

probably not much longer if Mercedes reliability is anything to do with it. My father in laws engine gave up ghost after 27k and year and half of running. Ironically that was a 2016 E350 CDI so good luck. Luckily he was covered under warranty so was repaired and now he exchanged for a Lexus.

Mind you I had to pay 3 grand for a new gearbox on 335d that was just out of warranty and had done 18k so it definately a german thing.