The Porsche Taycan, which has gone on display at the Frankfurt motor show, is set to rewrite electric car performance benchmarks when it hits UK roads in January next year, with official technical specifications and data suggesting it will eclipse all mainstream rivals in every sporting regard bar the 0-62mph sprint.

Key to the Taycan’s performance capabilities, Porsche says, is the decision to use permanent synchronous motors (PSM) rather than cheaper, but larger, heavier and less consistent asynchronous motors (ASM). It says the packaging, thermal management and high efficiency benefits of them justify their extra cost.

Although the Taycan’s 90kWh battery pushes the car’s weight above 2.2 tonnes, the Taycan has the lowest centre of gravity of any Porsche on sale today – and close to the 918 Spyder’s – and weight distribution is a near ideal 49:51. 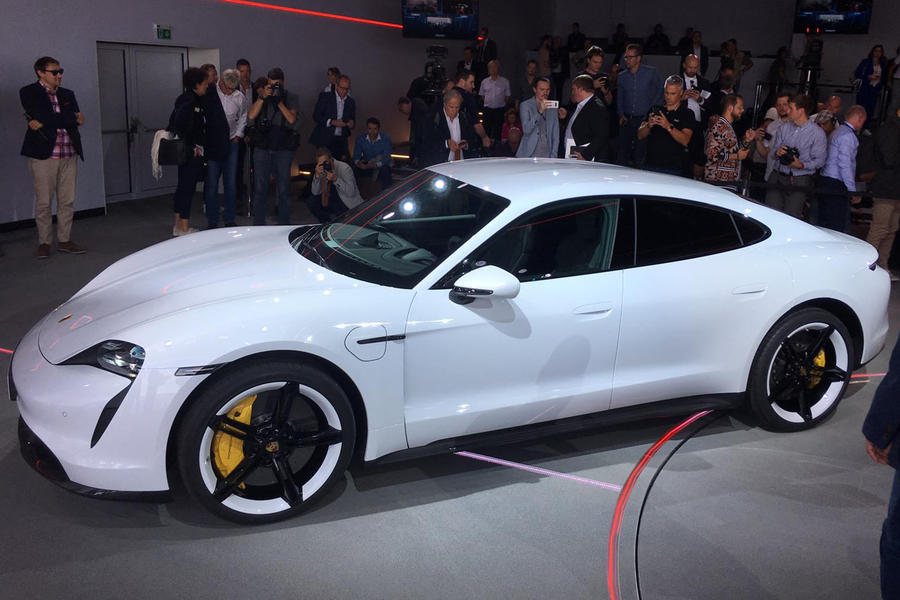 Through electronic control mechanisms the motors’ capabilities extend to enhancing the Taycan’s response and handling, which insiders working on the project say was regarded as needing to be “not just class-leading, but a step change beyond what’s available already”. Throttle response is five times quicker than on a combustion engined car, for instance, traction control 10 times faster and torque vectoring front to rear five times faster, while an electronic limited slip differential can respond to wheelslip 50 times faster than a mechanical set-up. Porsche Stability Management can be used, sit in a Sport mode that offers limited intervention or, crucially for enthusiasts, be switched off entirely.

Advantages over existing rivals are not limited to electronic advances, however, with Porsche also highlighting a unique suspension set-up, based on the Panamera’s but using three-chamber air suspension that also allows for the car to drop 22mm at speed, enhancing efficiency and lowering the centre of gravity, and to lift 20mm in the face of any obstacles.

Porsche’s Dynamic Chassis Control is available as an option and, using an actuator derived from the Panamera’s system, can reduce body roll to almost zero degrees even at maximum lateral load and respond to understeer or oversteer in milliseconds. Rear-axle steering also aids high-speed stability and low-speed manoeuvring. 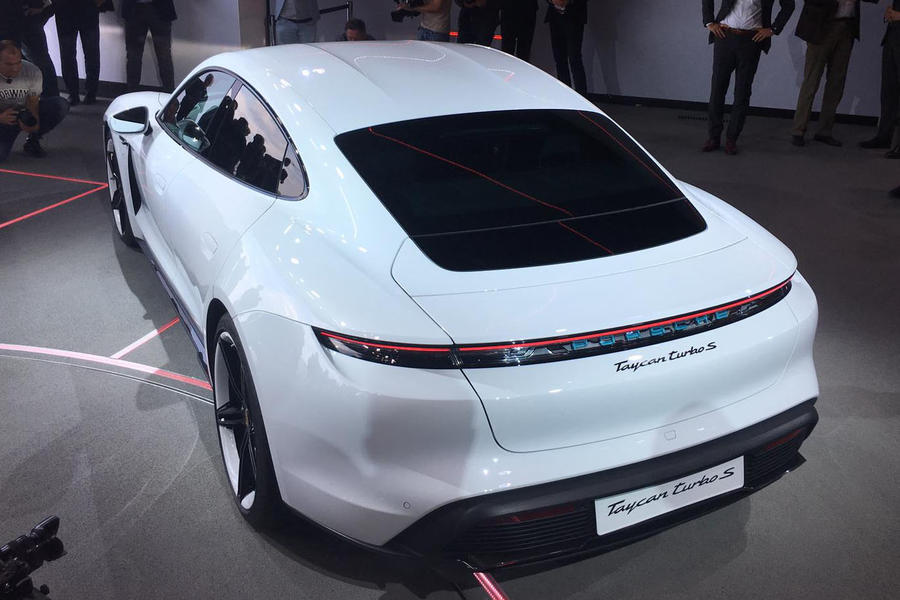 Porsche says the Taycan’s two electric motors, producing a combined 616bhp and 627lb ft of torque in the Turbo, deliver a 0-62mph time of 3.2sec. In the Turbo S, meanwhile, they hit a peak of 750bhp and 774lb ft with an overboost function that shortens that sprint to 2.8sec. Performance is enhanced by a two-speed gearbox on the rear axle, which has a short ratio for maximum acceleration from a standstill. Depending on the selected mode the Taycan can also switch between four, rear and front-wheel drive. The Taycan has already set a Nürburgring lap record for four-door, all-electric sports cars with a time of 7min 42sec – around the same as the 997-generation 911 GT3 achieved at the track.

In contrast, the Tesla Model S Performance hits 0-62mph in 2.4sec in Ludicrous mode. However, Porsche claims that the Taycan can replicate its best time repeatedly – anecdotal reports suggest the test engineer had to stop testing after his 26th full-bore launch as he felt unwell as a result of the g-forces – whereas Ludicrous mode requires specific temperature and battery charge criteria to be in play, limiting its potential and repeated use.

Furthermore, Porsche has pledged that the Taycan will not want for practicality, with the Turbo offering an official range of 281 miles based on the latest test regime and the Turbo S 261 miles. It is expected to be offered in four and five-seat versions, and has 82 litres of front luggage space and 400 litres in the boot – with the rear dimensions having been dictated by creating enough room for two golf bags to fit in.

Although the Taycan is shorter than the conventionally-powered Panamera, it is notable for having deep footwells – described by Porsche as ‘foot garages’ – for rear-seat passengers, made possible by ending the floor-mounted battery pack under the front seats. This allows for significantly boosted rear space and makes it potentially comfortable for adults on long journeys. Other interior highlights include the 911-derived driving position and the eye-catching use of a configurable 16.8in digital instrument panel, a 10.9in infotainment screen and an 8.4in screen for the climate control below that. Buyers have the option of adding a fourth, 10.9in touchscreen for the front passenger, too.

Other features include wireless software updates, which can upgrade battery and charging performance and infotainment functionality over the air. Standard kit on the Taycan Turbo includes 20in alloys, adaptive air suspension that can lower the car by 22mm, Apple CarPlay (but not Android Auto as Porsche data suggests all but a handful of its owners use Apple products), a Bose stereo, matrix LED headlights and dual-zone climate control. The Turbo S adds 21in wheels, upgraded brakes and 18-way electrically adjustable seats. 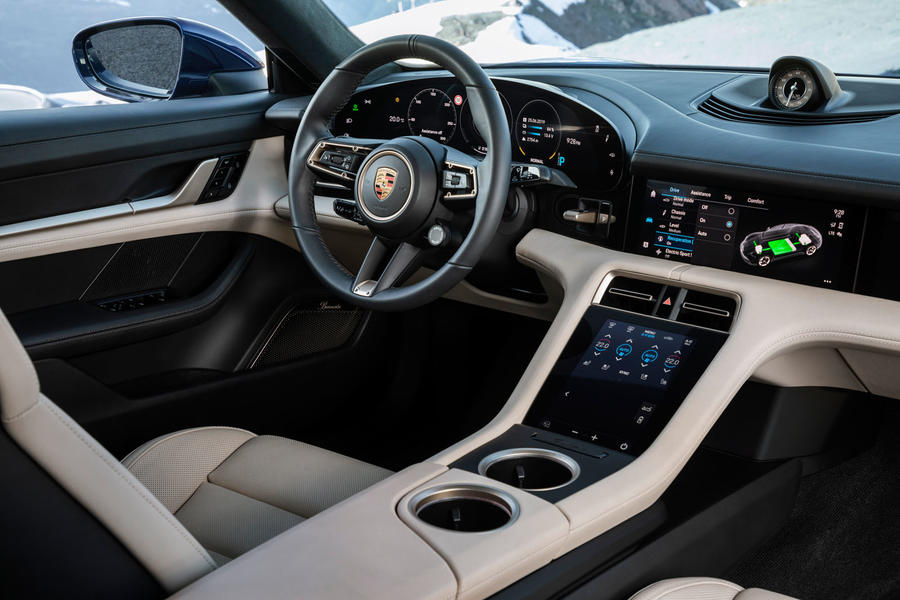 The Taycan also stands out for being the first car to use an 800-volt electrical system, enabling charging at 350kW, which can give 62 miles of range in five minutes, or take the battery from 5% to 80% full in around 20 minutes. Chargers capable of this are currently only offered by Ionity, a growing European network set up by car manufacturers to which Taycan buyers get a three-year subscription. It has two stations in the UK and plans for 38 more.

If hooked up to a slower charger, the Taycan uses a 400V on-board charger, rather than allowing electricity directly into the battery. This allows up to 50kW of energy flow – the fastest you get at most fast chargers in the UK today – but can be upgraded for a fee to accept 150kW; these chargers are rolling out with increasing frequency in the UK, and are already offered by BP Chargemaster. Porsche says a 11kW charger requires six to eight hours to take the car from 5 to 80% full. 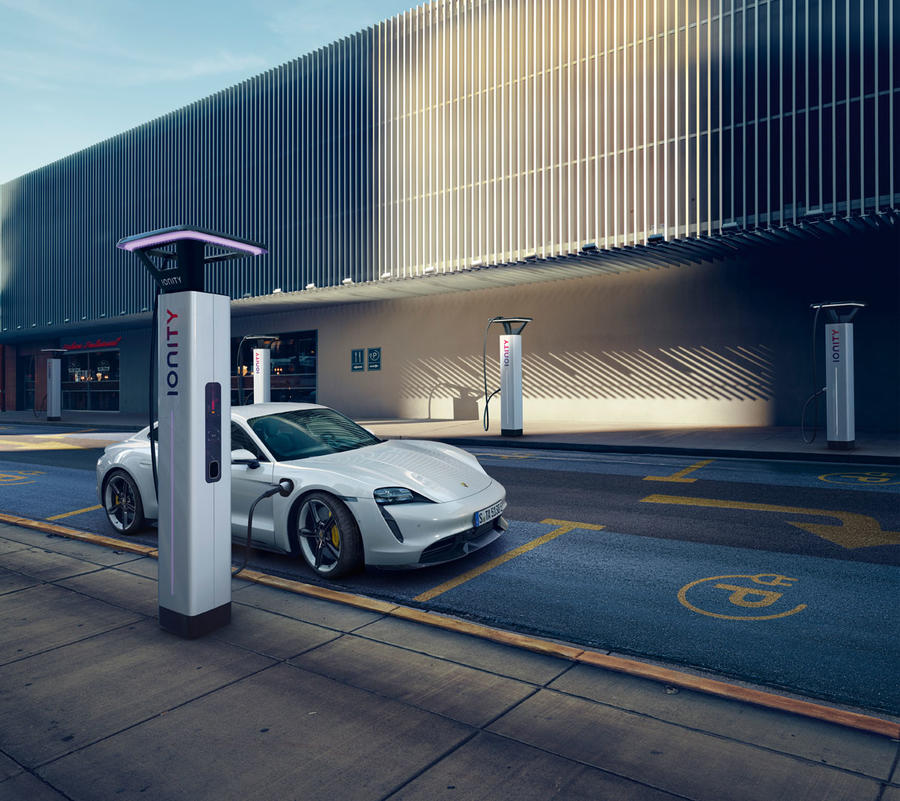 Porsche provides a three-year warranty, on the Taycan itself, while the battery is covered separately for eight years, with a guarantee that it won’t drop below 70% of its original capacity in that time.

The firm says it has taken 30,000 reservations for the Taycan so far. Board member Dr Meschke said plant capacity is 20,000 but is “flexible”. However, he added, some customers could be waiting a year for delivery.

Porsche will launch cheaper, less powerful versions of the Taycan in the coming months. While being less powerful, they will not decrease in electric range over the Turbo and Turbo S, said Porsche boss Oliver Blume. He also hinted at more powerful versions following in the footsteps of a typical 911 model strategy.

Blume added that there are “a lot of opportunities with the (PPE) platform”. He namechecked the next electric model to arrive late next year: the Taycan Cross Turismo. “One opportunity is the Cross Turismo, a car with more space and that can off-road. I’ve tested it off-road and it was as exciting as the Taycan was on track.” 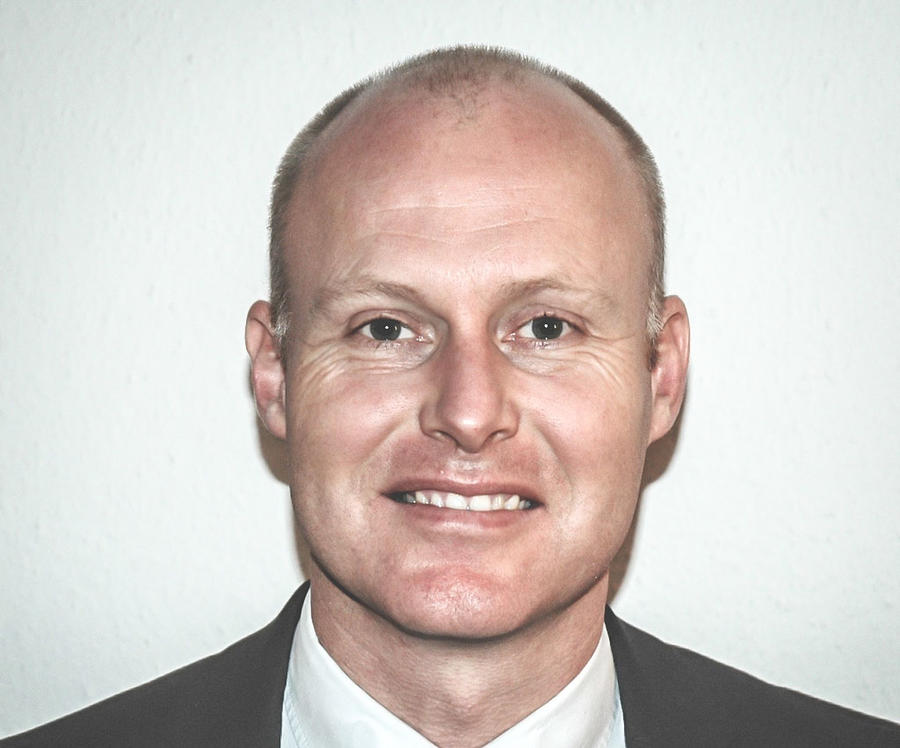 What was the brief for the Taycan project?

“I started work on the car four years ago, and the only directive was to build a Porsche for the next age. There were no compromises for it being an electric car. It had to deliver on every value Porsche stands for.”

What were the main challenges?

“There are a number of contradictions that we had to resolve, from the obvious tensions of Porsche’s tradition versus the need to innovate, to the need to make a high-performance car that is also functional and socially acceptable.”

Which details are you most proud of?

“There are many, but the low sloping bonnet line, reminiscent of old Porsche sports cars, was made possible because there is no engine. It is good when a change can take us back to some of the classics.

“Then there is the work on the aero optimisation; the car has a 0.22 drag coefficient, the best for any Porsche, and to achieve that we’ve added all sorts of details, from retracting door handles to active cooling flaps.

“Finally, we have to be proud of the repeatability of performance. This isn’t just a car that can be thrilling to drive now and again - it can hit is peaks over a sustained amount of time. I think that sets us apart from rivals.” 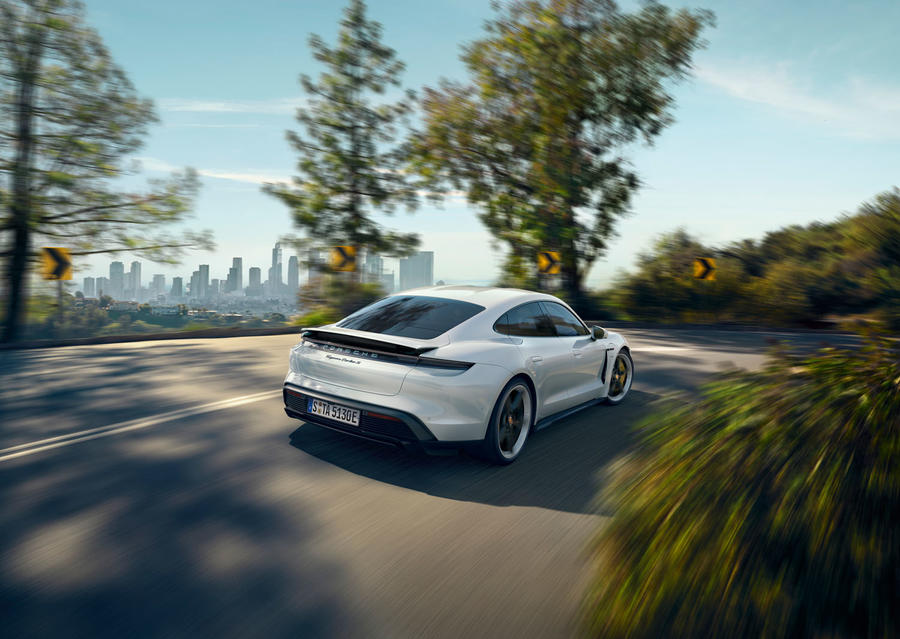 “For now we have two, but a Taycan Cross Turismo will follow, with more space for luggage. Beyond that there are of course possibilities.”

This is an ugly Porsche. And apparently so on purpose. Why? It’s like when a truly great songwriter “does a Bond theme”. Messy lights and front. Looks like it has already had a crash, with massive “edge” panel gaps all over it. Wasted opportunity.

All those saying its disappointing and cant beat a Tesla are missing one or two important factors.

2, Your nearest Porsche dealer will possibly be just around the corner, your Tesla one probably isnt anywhere near unless you live in London.

At this price and limited

At this price and limited range...they will sell maybe a thousand a year at the most...