From £29,0357
Mild hybrid engine completes an extensive facelift for Mercedes’ fourth-generation junior saloon, but the C200 isn’t the most convincing choice in the line-up
Open gallery
Close

Facelifts. There are light ones, heavy ones and those that look light but are, in fact, really rather heavy.

The fourth-generation Mercedes-Benz C-Class has recently undergone a facelift of the latter kind, with around 6500 parts — half of the car’s overall tally — replaced or modified in preparation for battle with BMW’s upcoming successor for the F80-generation 3 Series and an updated Audi A4.

First deliveries are set for July, at which point the petrol range begins with a sophisticated ‘mild hybrid’ C200 that pairs a downsized engine with a 48V belt-driven starter/alternator. There’s also a 251bhp C300 displacing two litres rather than the three its name suggests, and both are derived from the same ‘modular’ engine found in the new CLS. With the electrification of the entry-level model, gone is the option of a six-speed manual; a nine-speed torque-converter is now standard.

Changes have also been wrought to the diesel line-up, which now uses the same OM654 unit introduced to the Mercedes-Benz E-Class two years ago. Given the lacklustre delivery of the old lump, this is welcome news, and there’s a choice of either a 1.6 or 2.0 unit in the form of the 158bhp C200d or the 191bhp C220d. Both figures are up by around 20bhp on the models they replaced, although only with the more powerful engine will you have the (optional) security of Mercedes’ 4Matic four-wheel drive.

Given that one in every five cars Mercedes sells is a C-Class, there will be further derivatives, not least a fully plug-in hybrid in the form of the petrol-engined C300e and its diesel equivalent, the C300de. Both will get an on-paper electric range of 31 miles, owing to a 13.8kWh battery pack, and an output of around 200bhp, although we have yet to receive any specifics.

As for what you can see, the bumpers have been tweaked and there’s a more interesting colour palette, but overall Mercedes’ junior saloon is as pretty as it ever was. In the UK, we’ll get SE, Sport and AMG Line trims that variously allow the C-Class to come across as everything from a particularly posh taxi to a shrunken Mercedes-Benz S-Class — something that’s largely down to the different grilles fitted. The headlights are also new and you can option adaptive Multibeam LED headlights made up of 84 rotating LEDs.

The adoption of the electrical architecture from the S-Class allows the C-Class to benefit from its sibling's safety systems, too. It means the camera and radar systems responsible for detecting other vehicles have been upgraded; the camera, Mercedes says, can ‘see’ up to half a kilometre up the road and in 3D for the first 90 metres.

Elsewhere, the Distronic cruise control is now linked to the navigation system, so it’ll rein in speed as you approach bends, roundabouts and the like. Naturally, you’ll need to pay more for all this: £1695 for the Driving Assistance package. 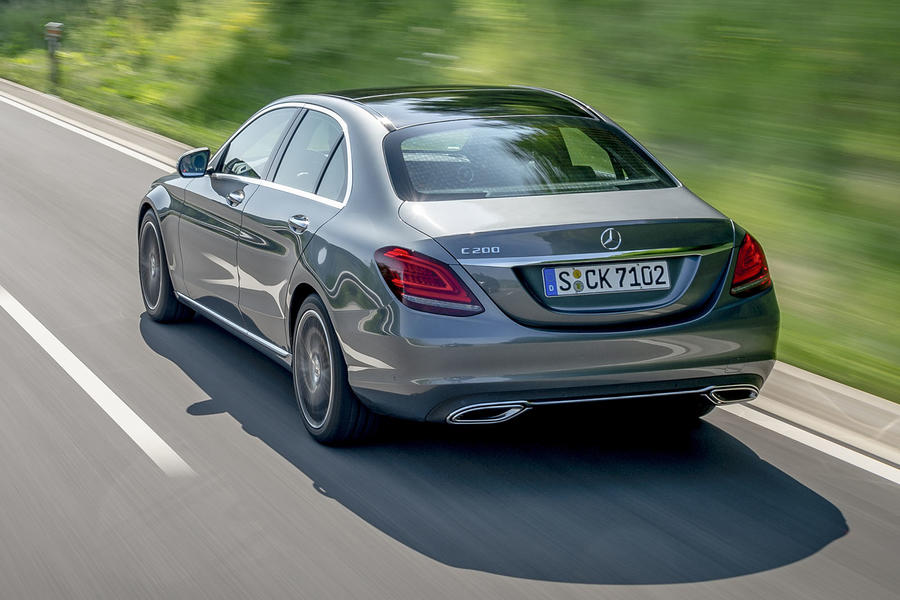 Exceedingly pleasant inside, although conspicuous in its absence is the smart dual-screen digital slab found in the Mercedes-Benz E-Class, Mercedes-Benz S-Class and now even the A-Class hatch.

To compensate, the instrument binnacle dead ahead of the driver is now fully digital (optional, alas, requiring you to part with £2795 for the Premium Package) and the screen for the Comand infotainment system has grown to 10.25in.

There’s also ambience lighting and new finishes including walnut and oak, although the basic architecture remains. As such, anybody coming from a 3 Series will find this a characterful, opulent environment, while those accustomed to a reasonably well equipped Audi A4 might call it fussy and a little disappointing to the touch.

Driven here is the C200. While it won’t constitute the bulk of C-Class sales (that’ll be the 220d), it is arguably the most interesting car in the line-up, not least because under the bonnet is a downsized 1.5-litre in-line four internally known as ‘M264’.

This engine features twin-scroll turbocharging for greater torque at modest crank speeds, while the cylinder bores have been pared back at their bases to reduce friction while preserving a tight seal. It’s an old-school efficiency gain — and a clever one at that. Meanwhile, the belt-driven starter-generator running off a 48V electrical system is the latest application of Mercedes' EQ Boost mild hybrid technology and supposedly yields the performance of the old 2.0 engine but with much less of a real-world thirst.

It’s a decent engine in practice, too, even if its thrummy tone is a bit present for the three-pointed star. The electric element is succinctly integrated, and in Eco mode you’ll find the engine shutting down completely and seamlessly while you coast. If it could do so just a fraction sooner after throttle closes it’d be more effective — and that is something Mercedes will surely refine as time goes by. As it is, on motorway and dual carriageways, you’ll spend a decent proportion of time burning no fuel at all, although this driveline doesn’t have the ability to sustain momentum with bursts of purely electric power.

It’s not all about economy, though. The EQ Boost system also helps the engine and gearbox rev-match for quicker shifts and there is supposedly an element of torque-filling as the turbo spools up — not that it was particularly noticeable at any point during our test drive. That nine-speed automatic gearbox shuffles its glut of ratios with adequate dexterity if your only intention is to make relaxed progress; push on and, despite its respectable balance and accurate (but uneasily numb) steering, the C200 cuts a strained figure. There’s a great deal of noise but not much propulsion.

Those in a particular hurry should look first to the 2.0-litre C300, although neither is much of a driver’s car. The C300 boasts 254bhp but forgoes electrification for a combined economy of 41.5mpg to the 44.1mpg of the car driven here (we managed about 50mpg at a 70mph cruise). Not a great deal of difference, admittedly, but due to a crucial disparity in CO2 emissions the taxman gazes rather more favourably on the smaller-engined car — as long as you don’t go for 19in wheels, which push CO2 output above 150g/km.

As for ride, on the standard Comfort suspension the C-Class is suitably fluid, if dispassionate, and has good body control. The C-Class also remains the only car among its peers to be available with air springs. These should be optioned with care, particularly by anybody who frequently drives in built-up areas crammed with speed bumps and the like. Motorway drivers have greater justification in spending the additional £895. 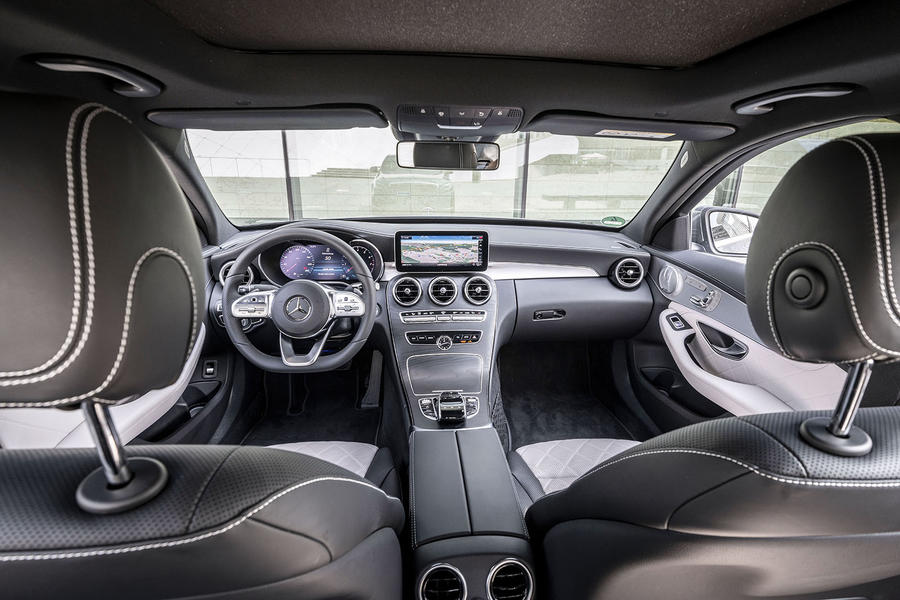 If you were considering a C-Class of some description before, the case the car now makes for itself is much stronger. Whether that is still the case when refreshed rivals from BMW and Audi arrive in the coming months is another matter.

As far as the C200 driven here is concerned, there are reasons besides tax rates (particularly applicable to countries in which engine size is the determining factor) for buying one, although they may not be of primary concern to Autocar readers. This powertrain is at its inconspicuous best when you allow it to sit back and deliver dignified, undemanding progress, and free from exertion it can be refined with impressive economy figures.

Those figures still fall short of what you’ll achieve in one of this car’s massively improved diesel-powered siblings. And that’s the hitch. While still no match for BMW’s oil-burning efforts, Mercedes’ new diesel engines for the C-Class are creditably sonorous, refined and more flexible than before. Meanwhile, if you must have petrol, the C300 is a more convincing effort. In the UK, it leaves this mild hybrid as a clever curiosity, but little more. 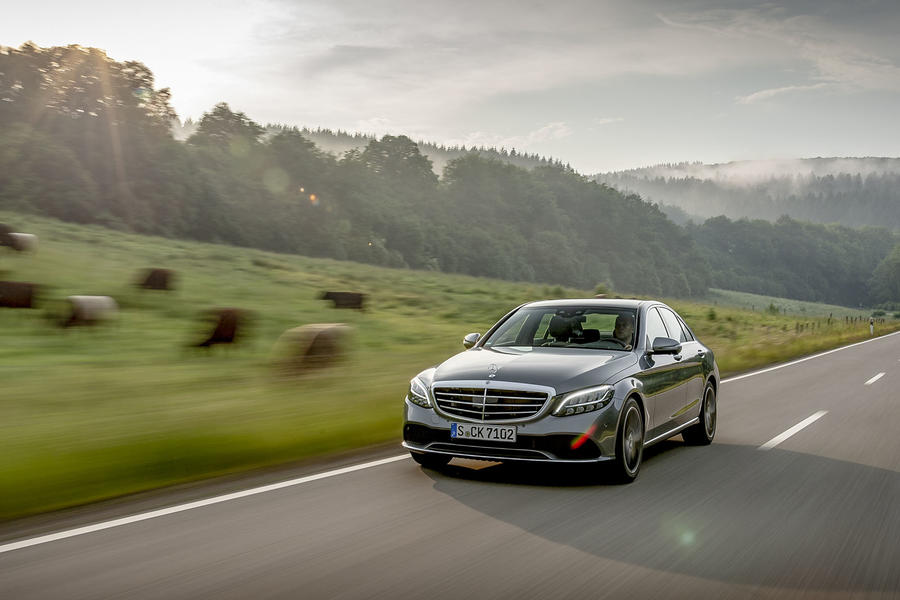 That steering wheel goes for all merc range. From A class to S class.
xxxx 20 June 2018

But all the other points hold true. And when they put the 1.5 COD engine in the next A4 I suspect there'll be next to no difference in economy, might even be better.

it will be part of a facelift for which, like Merc, there will surely be a price rise and potentially a reduction in relative refinement etc.

But all the other points hold true. And when they put the 1.5 COD engine in the next A4 I suspect there'll be next to no difference in economy, might even be better.

For tax not technical reasons then

Maybe that's why the Audi A4 2.0TFSI Auto is faster, lighter, cheaper, simplier, and more economic despite not having all this ‘Mild Hybrid’ tech. And that's the old model!

I'd hold on a minute

Audi have not released their post WLTP CO2/fuel figures for the A4 yet but the Merc is tested on the new harder requirements so you are comparing two different sets of economy figures.