Base price is £71,490, while kitted-out Launch Edition starts from £82,240 and brings cameras in place of door mirrors
Open gallery
Close

Audi has released the Launch Edition version of its first production electric car, the E-tron SUV.

The Mercedes-Benz EQC rival is on sale now from £71,490, while the Launch Edition raises that price to £82,240 and will be available to order from early next year.

The most innovative feature on the Launch Edition is the world-first use of two high-definition cameras in place of the traditional door mirrors offered in lesser versions. These project the view behind onto two OLED screens mounted in the doors and reduce the width of the car by 15cm. They also feature heating elements and can detect dirt.

The E-tron gets 249 miles of range on the WLTP official test cycle – identical to the EQC but behind the I-Pace, which manages 292 miles.

Like all electric cars, it's eligible for a £3500 grant from the Government. Audi is now taking orders, with customers who pay a £1000 deposit securing 'priority access'. The EQC is tipped to cost from £67,500.

Audi powertrain director Siegfried Pint has said that a cheaper version of the E-tron with a smaller battery and therefore less range will follow in the next 12 months. 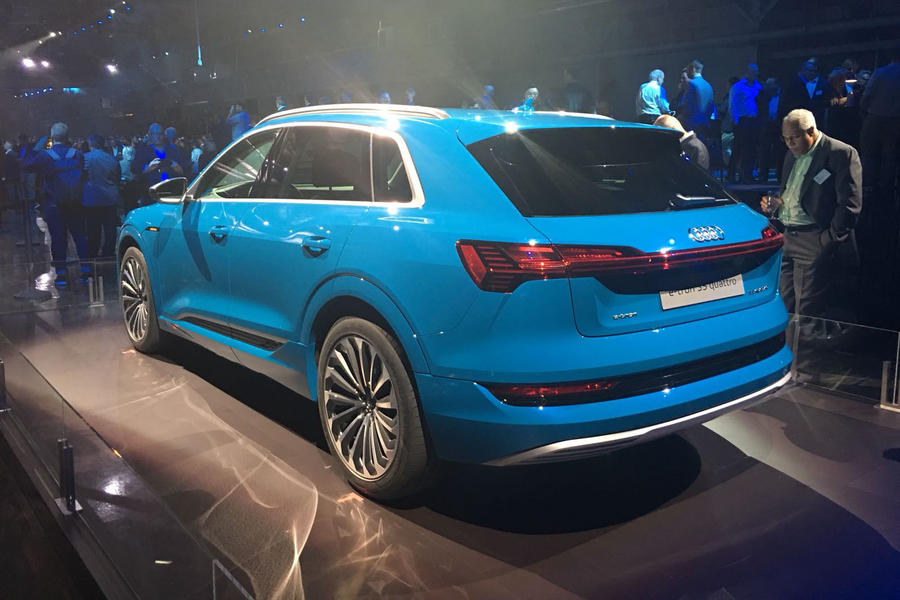 Sitting between the Q5 and Q7 in size, the E-tron features a handful of design elements that are intended to make it stand out from other Audi models.

It keeps the single-frame grille but uses a lighter colour for the louvres. “We didn’t want to lose the single frame; it contributed to making us the premium brand that we are today,” said exterior designer Stephan Fahr-Becker. “We selected a lighter colour. If a car is approaching from 50 or 100 metres, the single frame is recognisable as an Audi but different from, say, a Q8."

The E-tron also gets a name badge on its front, like Audi's RS performance models. “We were bold enough to put the name on the front of the car; we want to say the E-tron is the first of its kind,” said Fahr-Becker. 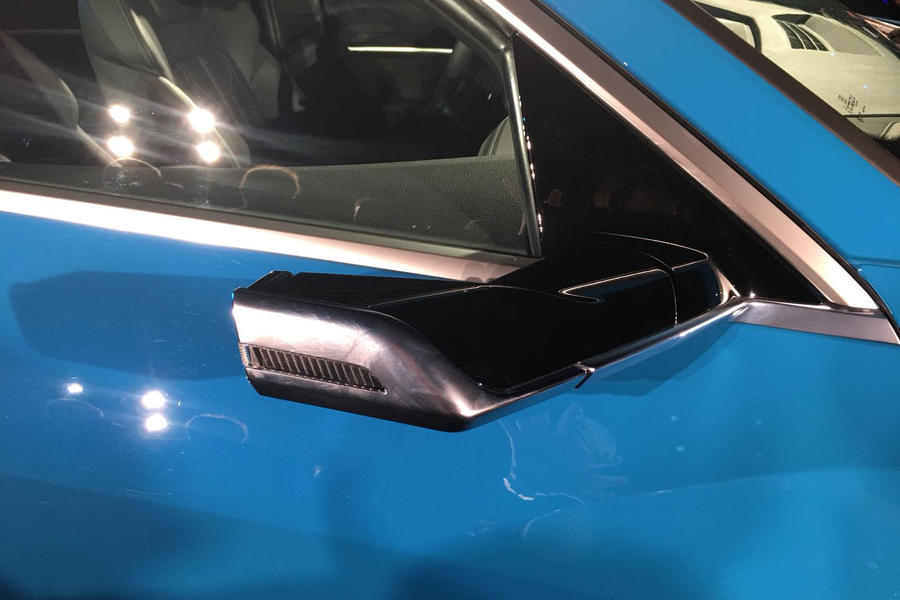 There are also specific wheel designs for the E-tron (“The task was to create aerodynamic wheels which still look sporty,” said Fahr-Becker) and orange hints – for example, in the name badge and optional orange brake calipers. “We took the colour from high-voltage cables. We wanted to create a special colour to accentuate that it's electric,” Fahr-Becker added.

Aerodynamics also played an important part in the design to help with the E-tron’s range, said Audi, with the car achieving a drag coefficient of 0.28. There is an air inlet with ducts for cooling the front brakes, as well as adaptable, speed-dependent air suspension and a fully clad underbody. The E-tron also sits slightly lower than a traditional SUV – at 1616mm high, it’s 43mm lower than the Q5.

The four-wheel-drive E-tron uses two asynchronous motors, one at the front axle and one at the rear axle, producing up to 402bhp and 487lb ft. In Normal mode, it produces 355bhp and 414lb ft and is capable of 0-60mph in 6.4secs. At full power, in Boost mode, it achieves 0-60mph in 5.5sec. Top speed is 124mph. Energy to power the motors comes from a 95kWh battery – only beaten by that of Tesla’s top-of-the-range Model S 100D.

A single-stage transmission transfers drive to the E-tron's wheels, and the lion’s share goes to the rear axle at moderate speeds. At full load, it will be a 50/50 split.

Using 150kW public fast chargers, which are currently uncommon, the E-tron will be capable of charging up to 80% in 30 minutes. Audi is one of a number of car makers (including BMW, Daimler and Ford) that have invested in charging network Ionity. Audi says the network should have nearly 1200 150kW charging points running by the end of this year and 2400 by 2020.

Audi electrification product boss Anno Mertens said that while only 5-10% of charging happens on public chargers, it is very important because the “customer would not buy an electric car if it were not possible”. He said the target range (which has been achieved on the E-tron) is 20 to 30 minutes. “That’s today’s benchmark – at 50kW, it would be 80mins which is unacceptable. But customers would like to see 10 minutes which is why we’re constantly working on future generations with higher charging power.”

Audi will offer an E-tron charging service card that will allow access to the majority of charging points through one card, rather than having to have accounts with different providers.

For home charging, there's a standard 11kW charger that charges the E-tron in 8.5 hours. An optional 22kW charger halves this time. 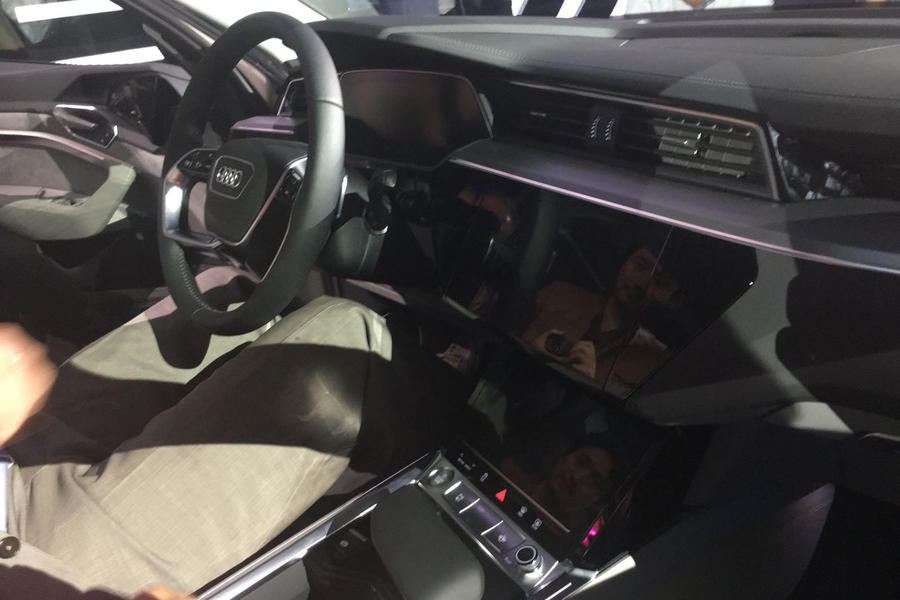 The interior is in line with other Audi models, with its Virtual Cockpit instrument display and two touchscreens – an upper 10.1in screen and a lower 8.8in screen – replacing most conventional controls.

The most notable difference is the optional addition of 7.0in displays in the front door panels near the dashboard for the camera-based side mirrors. The images from the cameras are shown on the screens and change views on the motorway, when indicating or parking. The driver can also control what is displayed. The aerodynamic benefits of the virtual mirrors can create an extra 1.4 miles of range.

Audi claims the E-tron beats rivals for rear leg room and front and rear head room. It has 660 litres of boot space, 160 more than the EQC. There is another 60 litres of storage space in the car's nose. The front space is intended to give easy access to charging cables, because the charging port is near the A-pillar on the driver’s side of the car. Towing capability is 1800kg.

The E-tron introduces a number of new connectivity services to the Audi brand. For example, customers will be able to remotely add equipment to their E-tron after buying the car through the MyAudi app. You’ll be able to unlock certain equipment, for example, adding matrix beam, lane assist system or digital radio. You can buy it for a month, year or a lifetime, although it will cost slightly more for the customer than if you’d ordered it from the beginning. The service will eventually be rolled out to other models.

It also works with a household’s Amazon Alexa voice service. Through Alexa, you can instruct the E-tron to preheat or ask how much charge is left in the car. It also works in the other direction: the E-tron can use smart home functions, for example, switching the lights on or specific music before you arrive home. In time, the system will have the flexibility to work with a number of voice assistants including Google and Apple, said Audi.

The E-tron will be built at Audi’s CO2-neutral plant in Brussels, Belgium.

Why did you decide on this design for your first standalone model?

"It was important to have an SUV. If you are sitting on a battery, the roof height creates problems. The Tesla Model S deals with this by making the car really wide. We were going to [design] something really mind-blowing and then customers said ‘can’t you just do a nice looking EV?’. People aren’t ready for major change. Instead, we decided on nice proportions."

What was the biggest challenge?

"To find the right roof line. We needed it to be sporty and aerodynamic but also to be a full SUV. We had to find the exact height where people still perceive it to be an SUV while ensuring it contributes to range."

What details will we see on future E-Tron models?

"Apart from the single frame grille, the front and rear lights will be a common theme. All the wheels will be more aerodynamic but look sporty. We also want to point out [in the design] where the battery is laying. That’s why there’s a wedge in the E-tron where the battery lays."

VIDEO: we try the Jaguar I-Pace

Those door cameras don't look any narrower than normal mirrors, but if Audi say they are...

Or for the sam price

You could have a Porsche Macan and a Golf GTI! Both of which - i'll bet - will hold their price vastly better and allow you to drive as far as you like without spending hours in srvice stations waiting for a charger to become available. Sorry, I just don't get it. And accoring to sales figures neither does anyone else. 0.6% of UK registrations are electric.

Much more expensive, slower and more crucially less range than the I-Pace, all this proves the Jag was better than was first thought.