Although the C-Class remains Mercedes-Benz’s biggest-selling car, you could argue that it’s actually the A-Class and its derivatives on the lowest rung of the Mercedes ownership ladder that are now the most important products for the world’s largest premium car maker.

All this means the success of each new generation is simply essential – and nowhere more so than in the UK, the world’s biggest market for the A-Class.

So forgive Mercedes for not varying the formula much for this fourth-generation A-Class. The last one played a key role in Mercedes overtaking BMW and Audi to become the most popular brand of its kind in the world.

How? By lowering the average age of the A-Class buyer by more than a decade and ensuring that 60% of its sales were to people who’d never bought a Mercedes before. Sell one car to one young person and you might then sell them 10 more in their lifetime under your cosy corporate umbrella.

The new A-Class is bigger in every important direction including a 30mm longer wheelbase, but it's 20kg lighter – commendable given the enhanced content it must carry.

At launch, there will be only an A180d diesel, along with A200 and A250 petrol models, all with seven-speed dual-clutch transmissions. An A180 petrol will be on sale before the end of the year, as will a manual six-speed gearbox, while A200d and A220d diesels will come on stream in early 2019. If your ideal model is not available at launch, you might be well served not to compromise but to wait until it is. 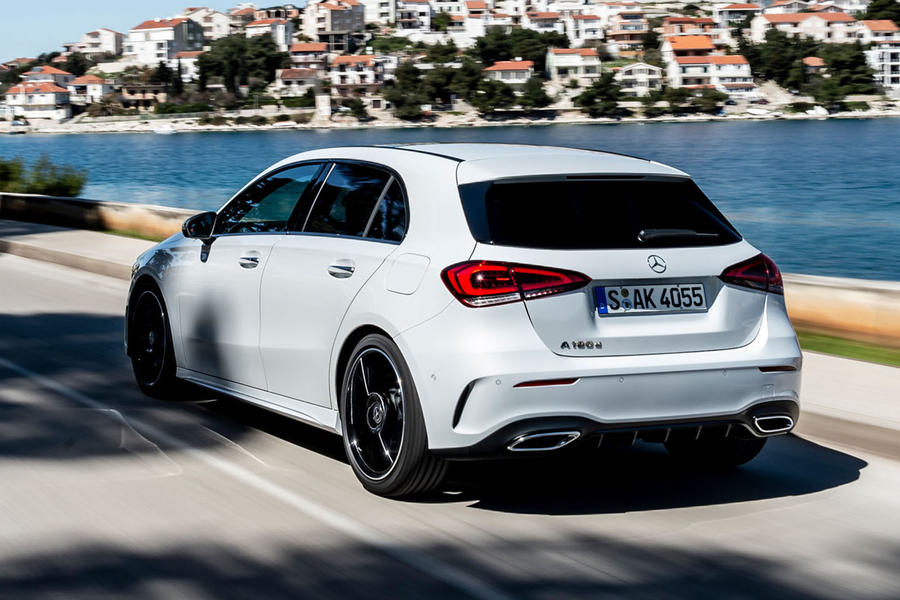 First, a word of caution. We can only review cars in the spec they are supplied and, as is so often the case with new launches, Mercedes chose to provide only the most luxuriously appointed A-Classes, laden with myriad options – some of which, like the driver assistance systems, won’t be available in the UK until September.

The slightly irksome consequence of this decision is that we have no idea what the interior ambience of an entry-level car might be, with two smaller TFT screens in place of the impressively monstrous ones on the cars we tested.

More troubling is the fact that this is the first Mercedes designed with torsion beam rear suspension – a design deployed on all affordable hatchbacks partly for space efficiency but mainly because the design is cheap as buttons compared with a fully independent rear end.

A multi-link rear axle exists, but only on the A250 as standard. It’s available on the A200 only if you choose the top-spec AMG Line trim; SE and Sport customers miss out. And if you order an A180d, as most in the UK will, it’s not available at all.

Frustratingly, you can buy an A180d in mainland Europe with the more sophisticated rear suspension because it’s part of the pack you get when you specify adjustable dampers, but there are as yet no plans to offer that in the UK.

Despite this profound change in suspension philosophy, Mercedes saw fit to bring not one beam-axle car to the launch. Its chief engineer, Jörg Bartels, insists it’s almost impossible to tell the difference and I believe he believes that. Everyone else, cynical hacks included, will reach their own conclusions about the decision not to let journalists see for themselves.

In the meantime, welcome to the most plush, sophisticated interior ever seen on a car of this kind. The perceived quality is fabulous and the design streets ahead of the rather predictable cockpits of even its best rivals.

Groaning under all the goodies it was carrying, the A180d test car did take some figuring out, but the graphics are gorgeous and, once learned, the functionality is pretty intuitive - save for the ‘Hey Mercedes’ voice recognition software. Three of us – all veterans of the car launch circuit – had multiple stabs at simply telling it to turn off the radio. Suffice to say, all failed.

The engine in the A180d is a 1.5-litre motor supplied to Mercedes by the Renault-Nissan-Mitsubishi Alliance and produces a modest 114bhp and a claimed 68.9mpg. Fuel economy is a poorer figure than the 74.3mpg of the similar engine it replaces and comes with a commensurate hit in CO2 – but only because the NEDC 2 figures now have to be reversed back out of new WLTP data, not because the car uses any more juice in the real world. Mercedes says that, in typical driving, the new car uses less fuel than the previous one.

Compared with the 2.1-litre diesel engine in more powerful versions of the last A-Class, it’s a paragon of refinement, although Mercedes’ all-new 2.0-litre diesel will likely combine both proper power with proper manners within the year. 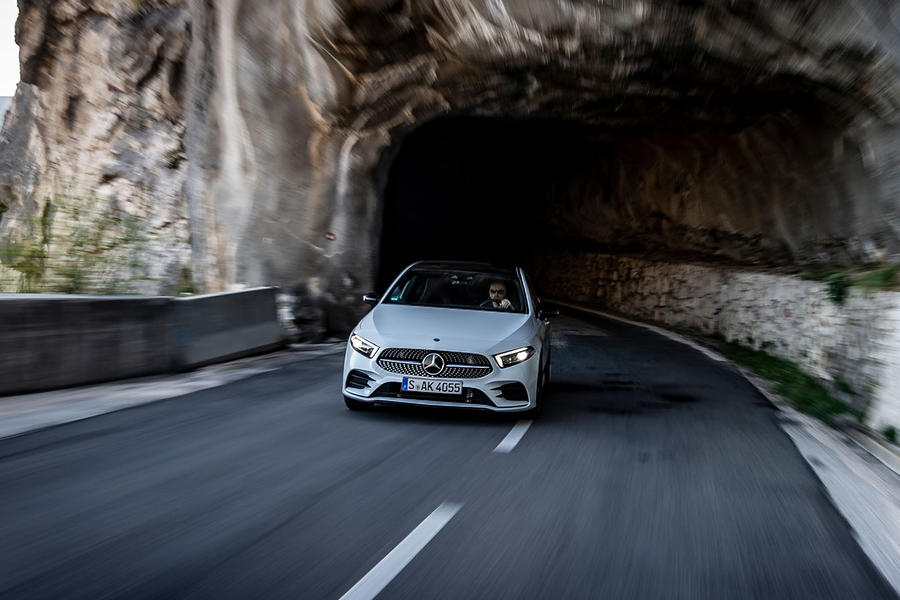 The problem for diesel hunters, in the meantime, is that this A180d motor offers very modest performance. Overtaking needs to be planned well in advance, even though the Getrag transmission works tirelessly and effectively to make the most of what little urge is available.

The 161bhp 1.3-litre joint-venture petrol engine in the A200 offers a rather strained-sounding step in the right direction, but it’s only when you saddle up the excellent home-grown 221bhp 2.0-litre petrol engine in the A250 that the A-Class offers both the performance and character you might hope and expect to find in a Mercedes. Interestingly, the A250 has a Benz gearbox but, as far as I could see, it is no better or worse than the Getrag one in its less powerful siblings.

For those happy to leave the overtaking to others, the A180d has much to offer, even beyond the realm of its glitzy interior and a usefully enlarged rear cabin offering more space in every direction save leg room, which remains unchanged.

The ride is quite superb, at least with the expensive rear suspension; it's dramatically better than the last A-Class and probably class-leading. It’s compliant yet controlled, and I could fault only the very slight vertical movement found when you drive the wheels off it on a very difficult road. I can’t see too many owners being unduly troubled by that.

It’s also a quiet car – exceptionally so, in fact. Cruise at any speed compatible with the retention of your driving licence and you’ll hear a distant thrum from the motor, very modest amounts of road noise and hardly anything from the wind at all. Class-leading again? Without rivals present, I cannot say, but I’d be surprised if it was not.

Where the car falls down, unexpectedly and badly, is in its steering. What is hard to understand is that the previous A-Class, while no BMW 1 Series, always responded to your inputs as you might hope and expect. But the new A-Class’s steering feels far more remote and less connected to the road. I don’t mind that it’s light at parking speeds, but I want some resistance to build up as soon as the wheel moves off centre to give me something to push against and, bluntly, it doesn’t.

At higher speeds and despite a fine chassis that’s stable when you need it and adjustable when you don’t, you still find yourself thinking far harder about placing the car on the road than you’d choose. The brakes are over-assisted, too, although unlike the steering you acclimatise to that particular foible in time. 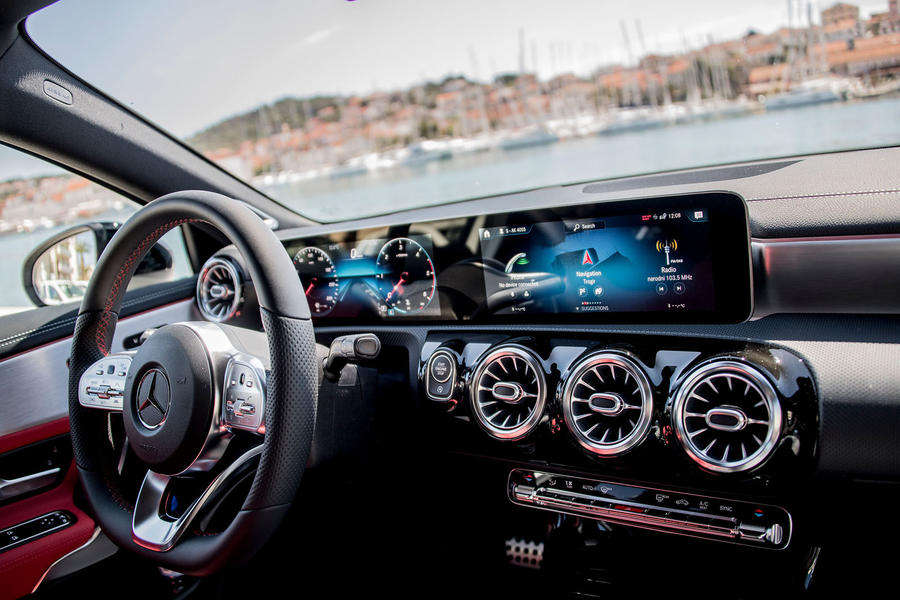 It’s a shame, because there’s a decent driver’s car waiting to get out of this A-Class – yes, even down here in the A180d cheap seats – but until Mercedes decides to sort out the steering, a compromised driving experience is the best that can be hoped for. It makes me wonder what approach AMG will take when it releases the hot 300bhp-plus A35 later this year and positively scorching 400bhp-plus A45 in 2019. And I’ll bet plenty right here that they do not steer like this.

This, then, was a launch that asked almost as many questions as it answered. What compromises, if any, are brought by the beam rear axle? Does the entry-level interior still feel as a Mercedes cabin should? Are the best engines still to be launched? Does the fact that I ended up hurling an expletive at the voice-recognition system that it heard as ‘fan off’ and shut down the ventilation say more about me or the car I was driving? All this, I am afraid, for another time.

For now, though, let’s consider what Mercedes has achieved here, which is the most technically advanced, quiet, comfortable, luxurious and just plain sophisticated family hatch the world has seen.

And yet I left the launch event with a sense of not just how good this car is – and, make no mistake, it is a very good car – but also how much better it could have been and might yet become. Many customers won’t care if the steering lacks feel, the brakes are over-servoed and the small diesel motor is rather gutless but few, I think, also read Autocar. To you and me, this stuff matters.

Should it be allowed to eclipse everything else that has been achieved here? Of course not, but it should at least be borne in mind. In many areas, this A-Class sets new standards of hatchback design but, with a bit more attention paid to the way it stops and steers, it could have been a landmark. 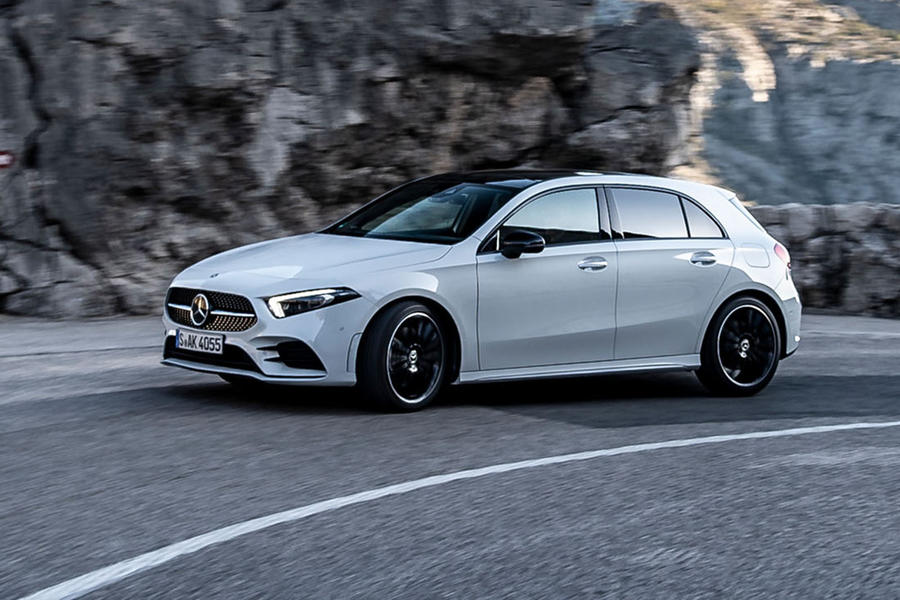 To answer a couple of points

To answer a couple of points raised:

The A3 and 1 Series need to make in roads into A-Class sales, not the other way around.

As others have said, binning the IRS on lower-powered versions seems a bit cynical. This is a finanicial decision to grind out a few more quid per unit, no doubt based on the 'can we get away with it with badge-obsessed drivers' question.

Having said that I am impressed with the interior and apparent refinement and ride quality (on IRS) that are usually only the domain of larger cars. I saw a video clip of the augmented reality sat nav which seemed great so they seem to be giving with one had and taking with the other for this new model.

The entry level car can be

The entry level car can be described in two words: Poverty Spec.

do any of the many commenters here posting incredibly negative points about mercedes actually own one? I have a new C class and my partner a 2016 A200 AMG, and coming after a long line of other brands, including ford, Volvo, VW and audi, i can safely say these are better built, quieter, better to drive and more reliable; a fantastic ownership proposition.

I do not think it is useful to be so cynical about the British car buying public; if they are happy with the cars they buy then good for them. A mercedes on the drive will be seen as a real achievement for many and even if a Mazda 3 is a better car for some here you will never convince the majority.

Cars on the market now are all generally very good and the differences are generally semantics only really noticeable by enthusiasts. I am an enthusiast and i think mercedes are excellent.