Genesis was criticised when it launched little over a year ago in Europe for offering only diesel and petrol engines - powertrains that felt geared towards America, a country in which it has found success.

The Genesis GV60 answers that: the brand's first electric model falls into Europe’s most relevant segment. And there’ll quickly be more, too. Electric versions of the GV70 and G80 will arrive by the end of this year. By 2025, Genesis will launch only electric models, and by 2030, that's the only type of cars it will sell.

Europe is a tricky one to break, though. You only have to look at the demise of Nissan-owned premium brand Infiniti to see that. As Genesis boss Dominique Boesch says: “Europe is considered the most demanding market. Coming here is not something you do without a lot of thought.”

Genesis is trying to do things differently, with the aptly named 'Genesis Difference'. The focus is not so much on the cars - but that, too (more of which, later) - but the overall experience. That includes, briefly, a personal assistant for your entire car-buying and owning experience; a five-year care plan; car deliveries and pick-ups to your home; transparent, fixed pricing; and 'studios', a modern-day dealership where you can scope out the models without salespeople on commission prowling around. Currently, the only studio in the UK is at Westfield shopping centre in London but more are coming.

The Hyundai-owned brand benefits from being part of the automotive giant, particularly on the technology and platform front. This GV60 shares its E-GMP platform with the Hyundai Ioniq 5 and Kia EV6, which means its chief traits are the same: flat floor, good efficiency, 800V electrics and 360kW ultra-fast charging.

Inside the industry: Will the agency sales model succeed?

Inside the industry: Will the agency sales model succeed?

It’s a similar size to those siblings, too, but about 100mm shorter at 4515mm, on a par with its closest rival, the Audi Q4 E-tron.

There are three models available: Premium, Sport and Sport Plus. Premium, as driven, is a rear-wheel-drive, single-motor set-up, whereas the other two use all-wheel drive and dual motors for varying degrees of power. 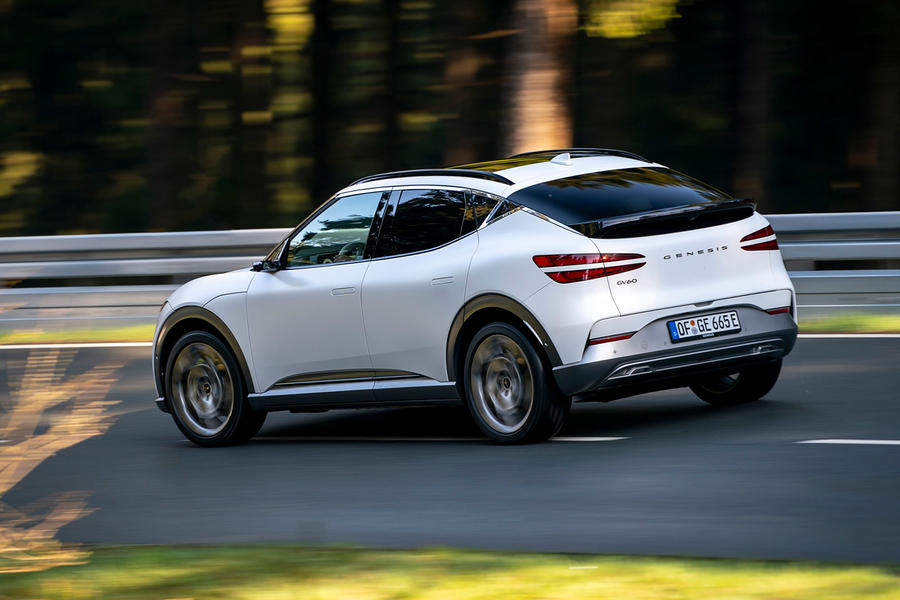 Genesis might be hedging its bets on overall experience rather than just the models it sells but it’s not ignoring that, either. Tyrone Johnson, who in a past life at Ford developed the third-gen, excellent Ford Focus RS among many others, is now in charge of development in Europe.

The GV60’s set-up, as with most EVs, means a low centre of gravity and excellent weight distribution. Tuned differently from the Ioniq 5 and EV6 to try and achieve the ultimate blend of comfort and dynamism, this is a car that keenly grips the road, holding corners with confidence and little roll. Steering for these chirpier sections of road is weighty, consistent and relatively direct, but could have even more feedback.

Producing 226bhp and pulling 258lb ft of torque, the Premium has ample, effortless power throughout the range and it’s hard to imagine why anyone would need more (although the two more powerful GV60 trims offer exactly that).

The ride is firm but happily not to the detriment of comfort. On the very few rough surfaces we could find around Frankfurt, the car absorbed crashes with ease. Whether that will apply on neglected UK road surfaces is another matter.

Electric cars are quiet, which means car makers have to work even harder to drown out the many other external sounds, and Genesis has done a great job here. Along with acoustic glass and good seals, tyres have a lightweight foam insert claimed to reduce road noise in the cabin and hydro-mount bushes also help remove unwanted noises.

If the Premium is good to drive, the Sport Plus is great, based on our short test of the model. It adopts Preview Electronically Controlled Suspension, already found on the Genesis G80, which uses a front-facing camera to ensure adaptive dampers are primed for poorer road surfaces.

Given its sporty focus - which translates to even more accurate steering, a 316bhp output and a fairly formidable 0-62mph sprint of 4.0sec - it’s no less comfortable than the Premium. Is it worth the extra £19,400? Probably not.

Premium has 321 miles of range, similar to the Q4 E-tron. Where it stands out is its rapid charging. At 350kW, it can be charged from 10% to 80% in 18 minutes. Genesis also claims a unique battery-conditioning function that manages the battery’s temperature for optimal conditions.

Finally, it has the same vehicle-to-load technology as the Ioniq 5, making it a mobile power source for items such as laptop computers or electric bicycles. 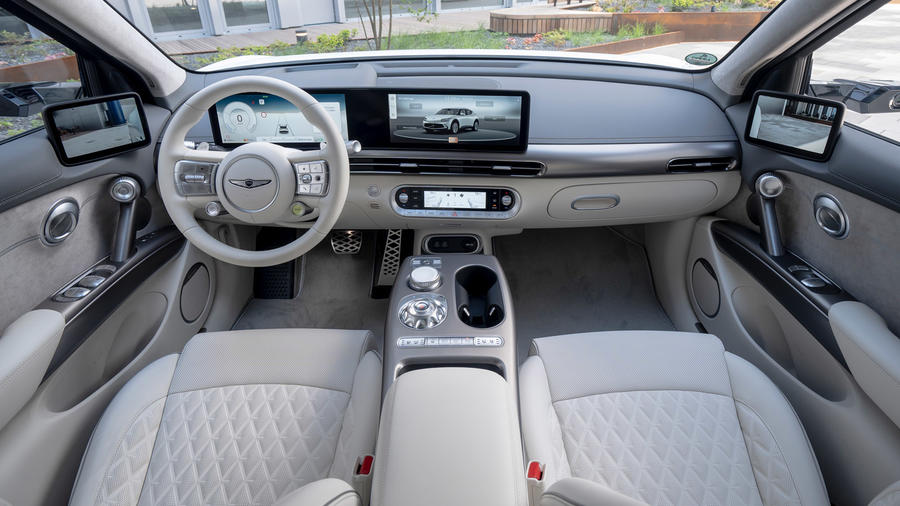 Inside, the Premium is… premium. Unsurprisingly, there are echoes of the Ioniq 5 in the floating 12.3in screen and beyond, but Genesis has raised the game significantly in terms of perceived quality and user experience. Neat touches include a crystal sphere, in the centre console, which rotates 180deg to reveal the shift-by-wire controller but also indicates whether the car is on or not, sometimes a struggle with EVs.

The Premium model uses an effective hybrid of traditional wing mirrors and two blindspot cameras appearing in the instrument cluster. It feels less intrusive than full-on camera screens in the car and should serve as a bridge to bring people on board with the full technology, which appears on the Sport Plus version.

The plastics, in places at least, can’t match its German premium rivals, most notably on the doors, where the silver-finish plastics and dark grey door grab should appear on a Hyundai at best, not a Genesis.

The GV60 Premium does everything well. If it dialled up improvements another 10%, it has potential for excellence, but even as it stands, there’s very little daylight between it and the Q4 E-tron. Genesis has brand building to do, but there’s plenty of reason to opt for the GV60, thanks to both the car’s capabilities and its broader customer offering. 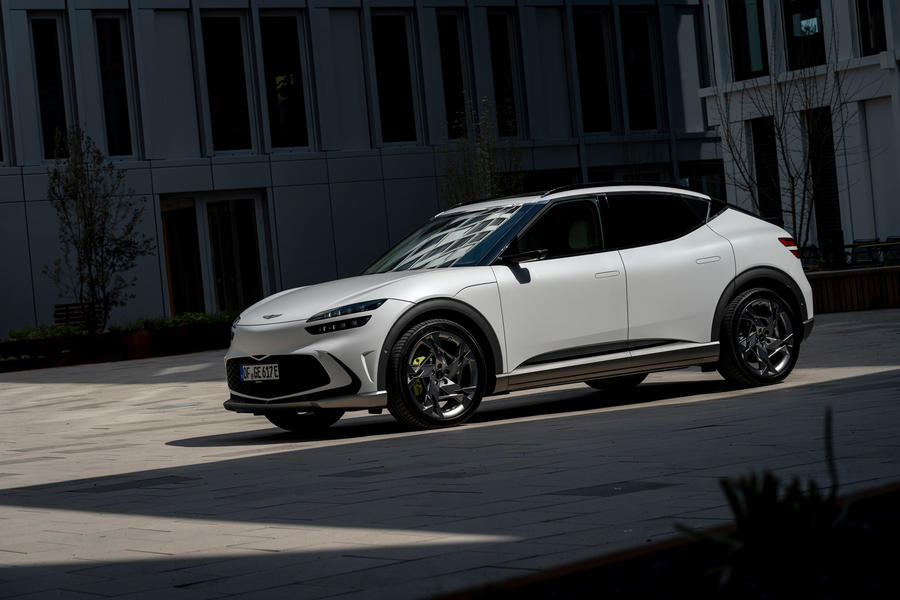