9
Sporting electric GT gets an off-road makeover – plus an estate-flavoured body. One ingredient too many?
Open gallery
Close

Every summer, students graduating from the prestigious Vehicle Design masters course at the Royal College of Art put on a show. Many of the scale models on display are spectacular, as you would expect given that they’re dreamed up in the brains of one-day chief designers for the world’s greatest car makers.

However, the ideas are often equally unrealistic: deliberate flights of fancy belonging far into the future. The cars look wild and purport to do everything you could imagine, but they could never actually exist.

You can see where we’re headed here: the new high-riding, shooting brake version of the Porsche Taycan, the new Porsche Taycan Cross Turismo, feels a lot like one of those end-of-year concepts at the RCA. Only it’s on sale in 2021, rather than 2121, and, in its most basic 4 form, costs little more than BMW’s new M3 Competition, at just under £80,000.

For that price, you receive 469bhp in an elegantly low-slung (if reptilian) shooting brake body that has Ferrari-grade kerbside ‘wow’ factor but is also fitted with roof rails and mounts at the rear for a bike rack. It’s all outside the ordinary. Yet that’s not all, because the comparatively sensible 4 isn’t the car we have here.

Our first taste of the Cross Turismo in non-prototype guise instead comes in the form of the steaming-hot £140,000 Turbo S, which sits at the very top of Porsche’s now eight-strong line-up of Taycan derivatives and straight away seems an even more extraordinary device.

The Turbo S in particular is an automotive platypus: impossible to categorise. More than 750bhp and an extremely low centre of gravity are pure supercar, but three-chamber air suspension, space for four (or five, with the optional rear-bench configuration) and an opulent cabin suggest plush-riding family GT.

Overlaid on this are five ride- height settings, beefy wheel-arch claddings and a Gravel mode, all of which hint at some level of rough-road ability, and, along with the improved head room, are where the Cross Turismo delineates from the regular Taycan saloon.

The long shooting brake silhouette then allows for a generous 1171 litres of boot space when the rear seats are folded flat; and even with the backrests up, you still get more than 80% the capacity you do in the BMW 3 Series Touring. Real utility, in other words, even if the aperture itself is high-lipped and slightly narrow, on account of the Cross Turismo’s phenomenally broad hips, which cover 305/30-section Pirellis and optional open-worked 21in wheels.

Finally, there’s the fact this thing is electric. And that’s the most startling element of the package, because before 2019, no road-going car had left Zuffenhausen without pistons. So, what exactly is the Cross Turismo Turbo S? Beyond an engineering flex of truly Schwarzeneggerian proportions, I’m still not sure.

What it isn’t is light. Its 2320kg kerb weight exceeds that of even the longer, taller and twin-turbocharged V8-engined Panamera Turbo S Sport Turismo by 185kg. That’s a result of the 93.4kWh battery, which yields a claimed 260 miles or 308 miles in city driving. As for charging, the 800V electrical system (400V is more typical in the industry) means the pack can theoretically replenish from 5% to 80% capacity in 20 minutes. 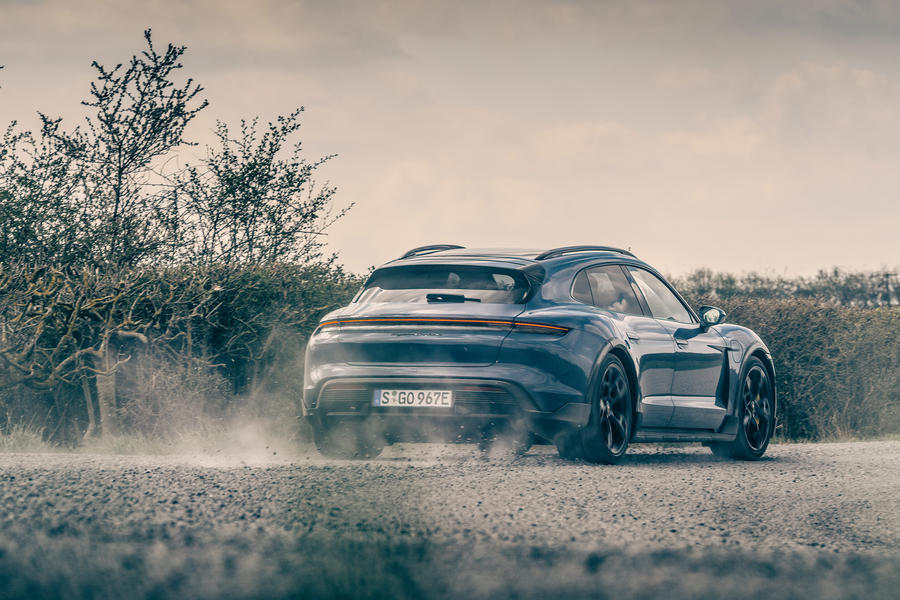 The sense that you’re guiding an awful lot of momentum is ever- present and one of the few flaws of the Cross Turismo – although even this is so well masked that it becomes only a faint awareness. Instead, you marvel at the manner in which the suspension – double-wishboned at the front with something similar at the rear – seems to pad out imperfections in the road surface but keep you thoroughly dialled into it, aided by the surprisingly chatty steering and excellent sports seats.

This car flows down even quite technical roads with the kind of delicate accuracy you would be delighted to discover in something much smaller and lighter. You can steer it with your fingertips, while balancing the chassis with the responsive throttle, which biases the more powerful rear-axle motor over the one at the front. The Turbo S touts the full scope of Porsche’s complex chassis tech, including active anti- roll bars, torque vectoring and rear- steering, yet the resulting blend of comfort and control feels effortless.

As for handling, the priorities are stability and roadholding. The physics involved are extreme, and the Cross Turismo isn’t a car that naturally encourages you to take liberties. Flick it through tighter corners and the clandestine battle that constantly rages between all that mass and the mammoth tyres is thrown briefly into relief.

Whereas a Porsche 911 gives you some freedom, here the stability control clamps down on any form of waywardness without hesitation. And if the rear motor does get the better of the hind contact patches, the traction control steps in with prescient speed.

However, both are infrequent events, because the reserves of grip and traction are enormous, especially in Sport mode, where the air springs contract and the body hunkers down (the default ride height is some 20mm greater than that of a Taycan saloon).

Fast, finessed and secure, the Cross Turismo has one more card to play in terms of real-world appeal: fine cruising manners. With the optional double-glazed windows, passengers can converse with little more than a whisper at 70mph.

That hefty kerb weight also gives the car a fundamentally reassuring and very relaxing gait – one superior to what you would experience in a Panamera or indeed many a hardcore saloon. Or, indeed, a regular Taycan. It would be a joy to deploy for the road trips, assuming that you had your charging pit stops planned out. 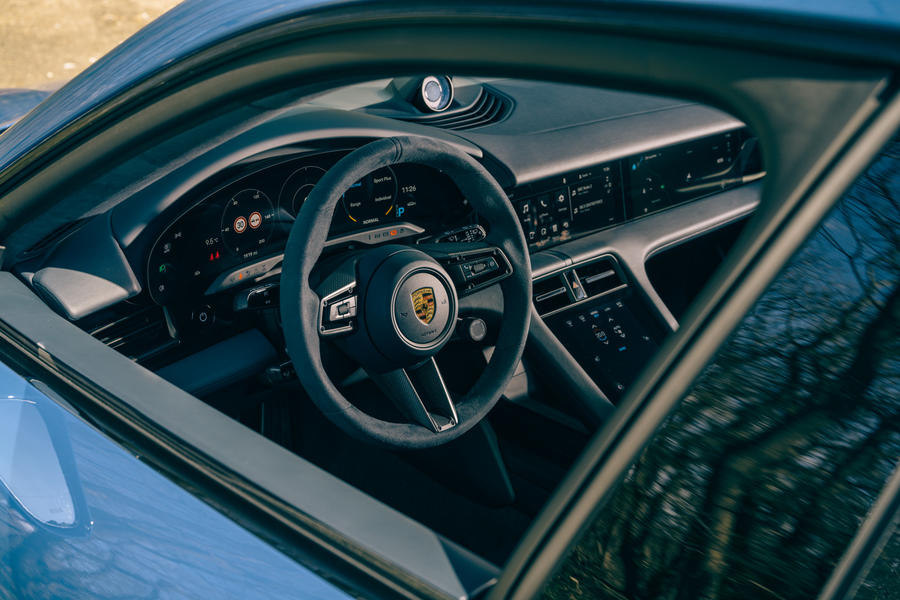 So, again, what exactly is this Porsche?

Well, it isn’t as practical as the Audi RS6 Avant or as playfully fluid as AMG’s GT 4-Door Coupé, and it doesn’t tout the range of the seven-seat Tesla Model X SUV (which in Plaid form is even more accelerative).

What it can do is reward and relax in equal measure, all while feeling supercar-special, despite possessing genuine breadth of ability. The very concept of the Taycan Cross Turismo melds together three or two distinct vehicle types, and somehow it all hangs together, brilliantly.

The Turbo S is hugely expensive and pointlessly fast, but one imagines lesser versions will feel no less cohesive and every bit as versatile – and desirable. 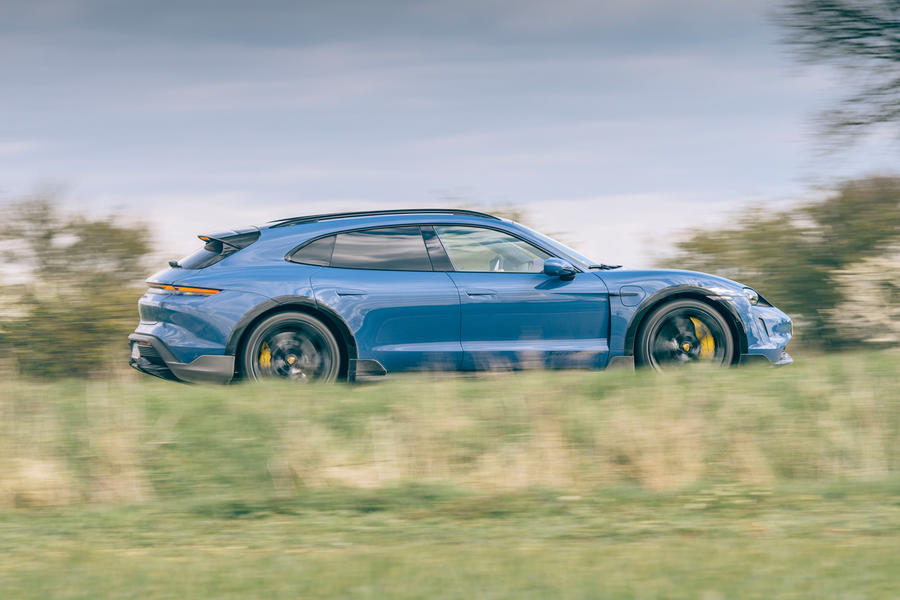 We've got the awesome Taycan, and now this crossover version, and the Macan EV will launch quite soon.  What's missing is a two door sports car EV, with 911 style and Taycan performance.  The Tesla Roadster is coming, why not the Porsche EV Coupe?

Niche cars attract different minds than mine. Not a fan of Elon but my neighbor's Model X has huge capacity and performance - the way its effortless instant torque allows it to safely join traffic in rush hour is amazing. In the ICE world, an E63 wagon has appeal as it loses no practicality but adds huge performance. But this Taycan Turismo cargo space is miniscule even with the seats folded, and with 4 adults onboard (in the cramped interior) there there would be 20% less luggage capacity than in a non-Turismo Panamera.