While we review new EVs as individual cars, some are also transforming the companies that create them.

The Kia EV6 is already a fine example of this trend, with its combination of technology, design and pricing leapfrogging many rivals that would until recently have been regarded as sitting higher in the brand-prestige hierarchy.

Here’s some bad news for those rivals: the new EV6 GT moves the game on considerably further. The range-topper’s performance has been boosted by an extent that takes it out of the mainstream and into very distinguished company. Its 77.4kWh battery (the same as in the standard EV6) is relatively small compared with those of posher EVs and its 263-mile range is unexceptional. But 800V electrical architecture gives it ultra-rapid charging capability, so find a sufficiently potent DC charger and the battery can be replenished from 10-80% in just 18 minutes.

The Hyundai Motor Group’s very advanced E-GMP platform also means the GT weighs a segment svelte 2165kg and its performance is undeniably at the sharp end, with 576bhp and a 3.5sec 0-62mph time. That makes it more powerful and quicker than the Porsche Taycan 4S, despite being £25,000 cheaper.

While the hardware has been upgraded, the design changes are limited. The GT is distinguished by 21in alloys and tweaked bumpers. It shares its spoiler with the GT Line S. Inside are new suede-trimmed semi-bucket seats and a new GT mode selector on the steering wheel, opposite the one for the usual Eco, Normal and Sport modes. 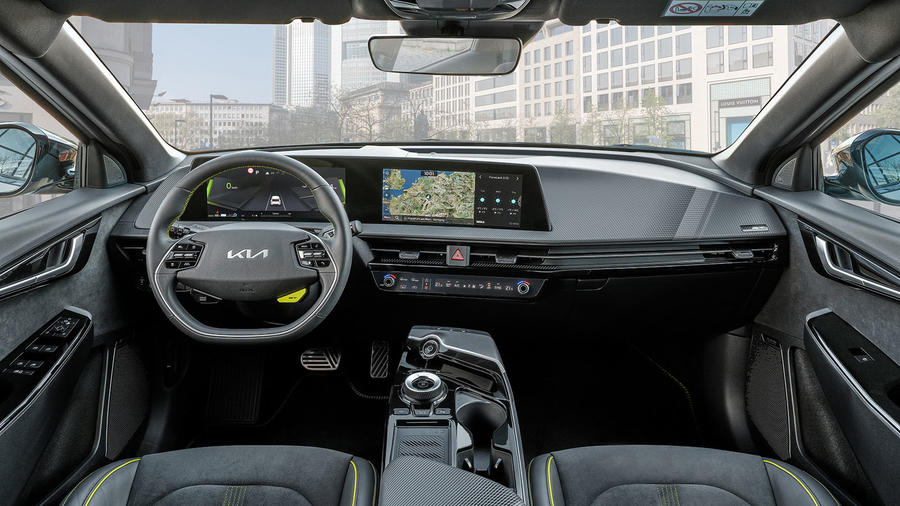 The GT doesn’t look like an electric muscle car, then, yet that’s pretty much what it is. Hardware upgrades include two new permanent-magnet synchronous motors, the one at the rear now making 362bhp, thanks to a new dual-stage inverter that uses silicon-carbide semiconductors. This drives via an electronically controlled limited-slip differential that can bias torque across the axle.  The smaller motor at the front adds up to 215bhp and can be decoupled under gentle use to raise efficiency. As tends to be the way with faster EVs, full thrust comes only in the most aggressive mode (here labelled GT). The limit is 460bhp in Normal and Sport or 288bhp in Eco.

While the GT feels as fast as those numbers suggest it should, Kia has opted not to give it the ultra-sharp accelerator response common to quicker EVs, with gentler initial reactions even in GT mode and Eco adding what feels like an inch of slack into the accelerator pedal. Pushing harder in any mode summons forceful thrust, though, and hard launches have the rears battling to find traction – this on dry asphalt and despite the standard fitment of Michelin Pilot 4S tyres instead of the usual low-resistance rubber.

GT mode also brings the unlikely option of a drift mode. Yes, really – although one that seems to have been created more to demonstrate Kia’s mastery of motor torque control beyond the limits of adhesion than in the expectation many EV6 owners are going to want to regularly smoke their two-tonne crossovers sideways.

Silly or not, the system worked well when I experienced it on a skidpan, allowing the GT to oversteer keenly and predictably at impressive angles. However, the active differential feels much more obviously relevant at lesser commitment, with its ability to juggle torque being used to help the EV6 to turn and to create what feels like a rear-biased handling balance in GT mode – one that lets you trim and adjust your cornering line well short of tyre smoke and gives an enhanced sense of involvement on twisty roads.

None of the changes have turned the EV6 harsh. The development team’s brief was to create an EV with the relaxed athleticism of the Kia Stinger GT-S. So although it sits on stiffer springs than the regular EV6 and has gained adaptive dampers, the GT’s suspension still feels pretty soft. In the gentler dynamic modes, there’s noticeable body roll under cornering loads, and even with the switchable shocks fully firmed, it stays respectably pliant. Refinement is still excellent, even at a pace well beyond that which most range-conscious drivers would pick. 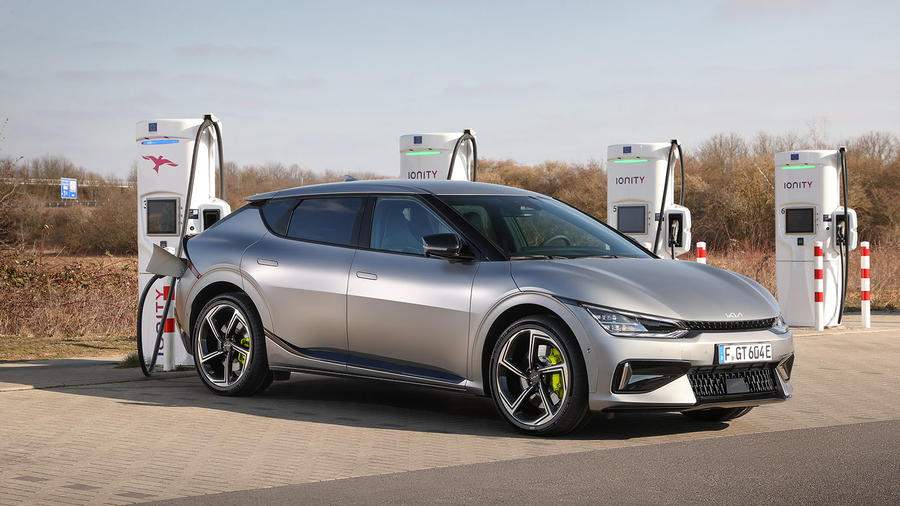 There are still a few grumbles, it must be said. The steering is direct and delivers strong, linear responses, thanks in large part to the grippy tyres, but its electric assistance has shorn it of any meaningful feedback, and GT mode just adds more weight to the rack. The GT’s variable regenerative levels work well, being varied using steering wheel paddles, but although the brake pedal has a good weight and blends friction and electric retardation almost invisibly, I found a very slight snatch when trying to make imperceptible low-speed stops.

Yet factor the GT’s £61,595 price into the equation and it becomes hard to quibble. That figure takes Kia into new territory, the GT being the priciest car it has yet sold in the UK. But the supplement of £5725 over the GT Line S version seems reasonable, considering the extra performance, plus the GT gets a standard heat pump for more efficient cabin temperature regulation, whereas it’s a £900 option on the lesser car.

It might seem unlikely that too many brand-conscious buyers will be cross-shopping this Kia with the Porsche Taycan or Mercedes EQC, but they really should be. The regular EV6 already feels like a benchmark in terms of its blend of practicality, price and performance, but the GT moves that on with what looks to be an unbeatable quantity of electric bang per buck when it reaches the UK later this year. Make no mistake: Kia is pushing its way to the forefront of the electric revolution.

Log in or register to post comments
Cobnapint 2 August 2022
And round the corner is Intelligent Speed Assistance which will eventually almost completely do away with the point of having a fast car.
xxxx 2 August 2022

Have you a date for that, thought not. Even if you did that makes a case for buying the car before such a EU rule introduced

The Dr - it's only a bargain if you have £61K to spend and petrol isn't dead because I can buy a petrol car that can go further on a tank than 263 miles range which is alot cheaper than £61K.

How many 4 door cars with 4WD that can do 0-60 in 3.5 seconds and around 200+ miles per gallon can you think of that are well only £60k.  And is your one and only deciding factor when buying a car is how big is the tank

Wow, this is a car with super car performance for £61k, this is a complete bargain and it demonstrates how EV are revolutionising the industry, petrol is dead, wow