From £26,2658
Tech upgrades give the A4’s cabin a welcome lift. Dynamically much the same as before, but it remains a refined, smooth operator.
Open gallery
Close

Sometimes it can be easy to momentarily lose sight of the fact that cars such as the Audi A4 are still relevant. We’re constantly being told that SUVs are hell-bent on global domination; that these bulky, overinflated machines won’t rest until they’ve managed to morph themselves so preposterously they can occupy every model niche imaginable - or unimaginable. Compact crossover, anyone? How about an SUV coupe? They’re the next Big Thing, don’t you know.

Anyway, with all the hype surrounding these jacked up vehicles of various shapes and sizes, you might think regular three-box saloons and estates have been dropped from the starting team to instead play a supporting role from the bench. Truth is, that’s not quite the case for Audi - just yet, anyway.

You see, Ingolstadt remains adamant that the A4 is still its core model. One in every five Audis sold around the world is an A4, and when you combine the number of saloons and Avants sold in 2018, it’s still the best firm’s best seller. It hasn’t been eclipsed by the Q5 SUV just yet.

In a bid to keep its compact executive model as relevant and on trend as possible, it’s put the A4 under the knife and given it a modest nip-tuck. As is often the case with these sorts of mid-life refreshes, the changes to the A4’s design err on the subtler side. The headlights and tail lights have been redesigned, the front and rear bumpers have been modified - you get the picture. The fact remains that the A4 remains a handsome looking thing, even if it can look a touch plain in some of the more basic specifications.

Speaking of, the model line has been shuffled slightly too. Technik now represents the entry level offering, and is followed by Sport, S-Line, Black Edition and new the new range-topping Vorsprung. Prices range from £30,750 for the entry-level saloon, and rise to around the £56,000 mark - though Audi is yet to confirm final pricing.

Power comes from a choice of three petrol and three diesel engines, with outputs ranging from 134bhp through to 246bhp. All engines aside from the 187bhp 40 TDI (the range-topping diesel) also come equipped with a 12-volt mild-hybrid system. 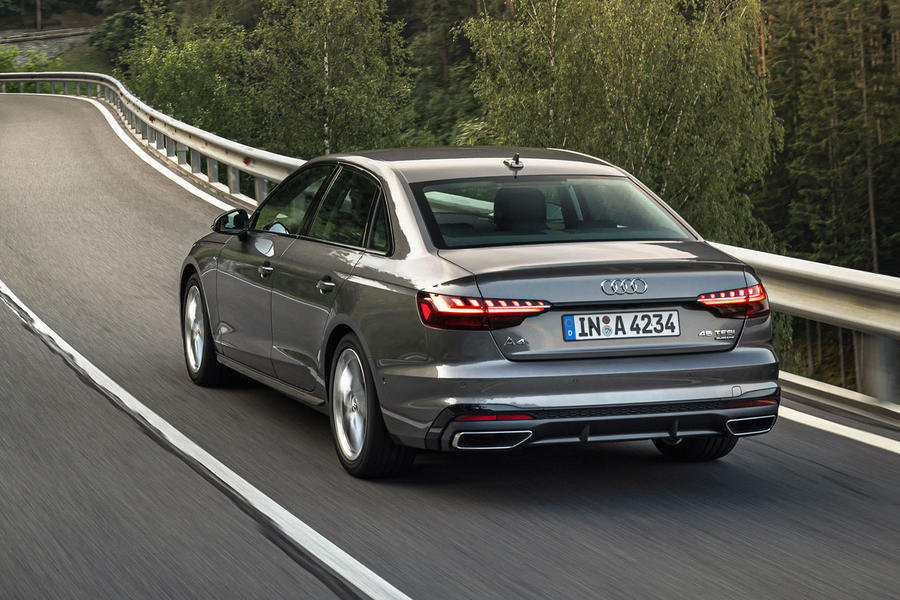 As with the exterior, the changes Audi has introduced to the cabin are also relatively minor. That said, it’s these small changes that seem to have the greatest effect on the A4’s overall desirability.

There’s a new 10.1in touchscreen that runs the latest-generation MMI software, and a new digital cockpit to replace the previous car’s analogue dials too. Not only do they give the A4’s cabin a new lease of life, they instantly see it return to the sharp end of the class in terms of tech appeal as well. Admittedly, the touchscreen might be slightly tricky to use on the move, but it’s hard not to be impressed by its slick graphics and responsiveness. The fact that it retains all of its physical HVAC controls is a big tick in my book, too.Our test car’s 40 TFSI petrol engine was typically smooth and refined too. Mated to Audi’s seven-speed S-Tronic transmissions and sending its drive exclusively to the front wheels, it’s at its most willing from above 2000rpm. Below this point it can feel as if it hasn’t quite woken up, even though peak torque is technically accessible from as low as 1450rpm. Once it has, though, there’s a willing powertrain here.

With 187bhp and 236lb ft to call on, it gets up to speed in tidy enough fashion, and will dispatch overtakes with little in the way of drama. It’s not blisteringly fast, but it’s quiet and unobtrusive - and that’s really what you want from a car like this, isn’t it? The transmission can seem a touch hesitant at times, though, preferring to hold on to a gear rather than kick down as you gradually use up the throttle pedal’s travel.

There’s not much in the way of feedback to be gleaned from the A4’s steering, but there’s a natural sense of weight here that inspires enough confidence in the car’s road-holding abilities. There’s a sense of tautness about its ride too, but this isn’t so pronounced as to compromise comfort. It makes for impressive body control through bends, too. 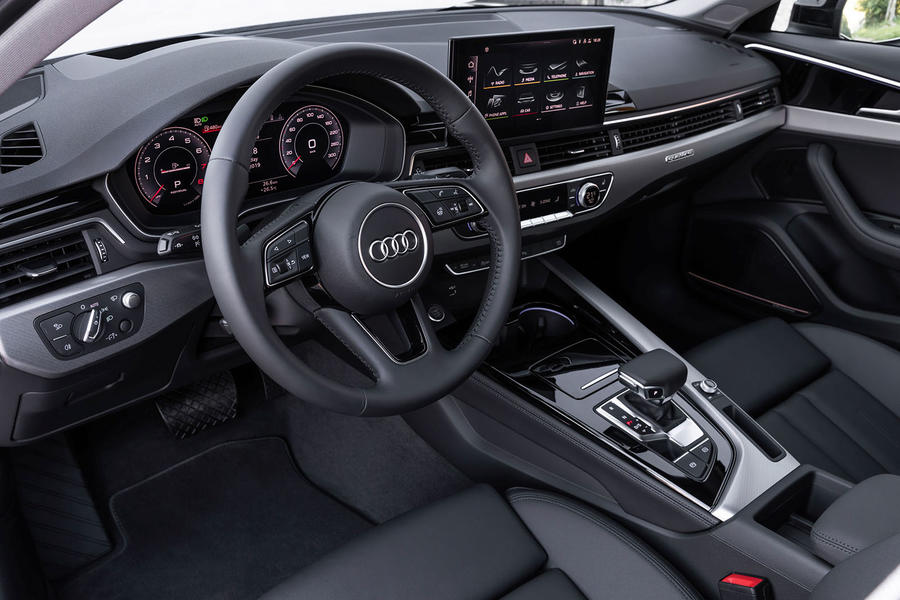 But while the A4s cornering ability is certainly commendable, it’s on the motorway that it really comes into its element. Road and wind noise aren’t in anyway problematic, its engine is hushed and demure, and its ride is confident and assertive without being exhausting or uncomfortable.Dynamically speaking, it’s not as plush as a Mercedes-Benz C-Class, and it certainly lacks the BMW 3 Series’ excellent athletic streak. But as a level-headed, mechanically refined and technologically intriguing contender in the class, you can certainly see its appeal. It doesn’t rewrite the playbook by any means, but it has its own unique sense of self that’s different to that of its immediate rivals. And I don’t think you could say the same about a lot of these identikit SUVs that keep showing up. 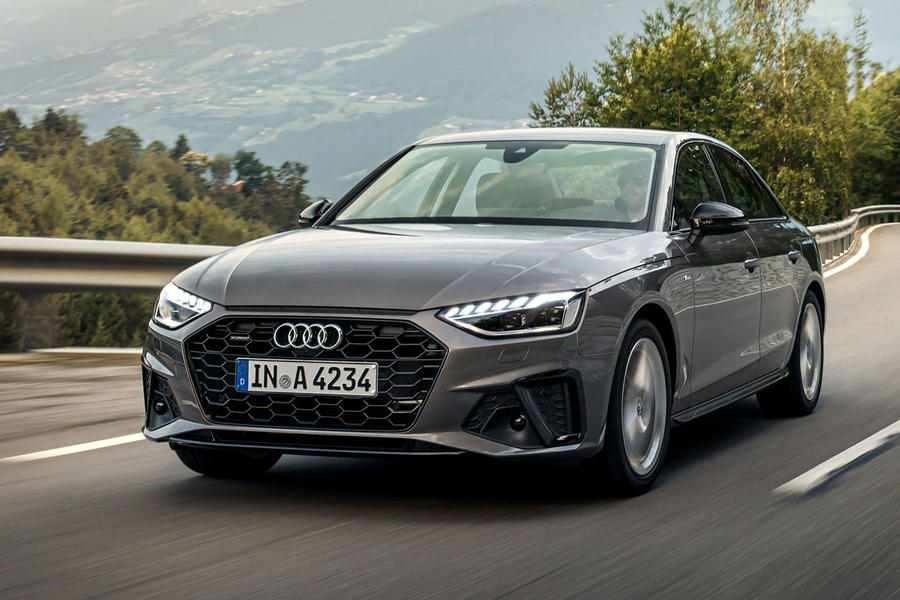 Oh I forgot to mention

why isnt the newly updated Jaguar XE considered a rival, it now looks and feels significantly better than the A4, and its always been better to drive.

the stuck on screen looks absolutely stupid, if it rose out of the dashboard and then folded away when not required (as it does in other Audis) it wouldnt be to bad, but this is just a plain lazy design that looks like an after thought, but its cheaper than actual buttons to produce.

Dull just got duller.  When

Dull just got duller.  When oh when are legislaters going to ban these really oversized screens .