9
Share review
The 8 Series gets the Alpina treatment, with more power and higher top speed. Does it deliver?
Share
Open gallery
Close

Sorry to labour the 2030 point (a date that is only going to get mentioned ever more frequently) and not to give the game away in the first paragraph, but we’re going to miss cars like this in nine year’s time. While accepting that something needs to be done around climate change, it’s a pity it will curb machines like the Alpina B8 Gran Coupé.

Because something with this car’s duality of purpose, blending GT-long legs with back-road excitement and a healthy dollop of character, is not anything that comes along all that often. Maybe future electric cars will deliver it, but most are a bit too 1D point-and-squirt at the moment.

Alpina, of course, has a rich history here. We’ve long been fans of the way the BMW tuner breathes on Munich’s finest so it’s with some interest that the latest lands on our doorstep. Following in the footsteps of the legendary B12 Coupé, based on BMW’s 850 CSi, and the more recent B6, the B8 Gran Coupé brings to 10 the total number of Alpina’s now offered.

In this instance, there are the usual visual and mechanical tweaks to the 850i ‘base’ car. Let’s start with the most important - the bi-turbo V8. Nestled extremely snugly under the bonnet is BMW’s 4.4-litre twin-scroll turbo’d petrol. Whereas the standard car gets 523bhp and 553lb ft, Alpina’s wizards have pushed the B8 to 613bhp and 590lb ft, the latter from a usefully low 2000rpm.

This was achieved by improving the cooling. While the exterior size of the intercoolers remains the same, the B8 has specific internals, leading to a 50% increase in cooling capacity compared to its BMW sibling.

It translates to a car that will sprint from 0-62mph in 3.4 seconds, half a second up on the BMW equivalent but 0.1 down on the Mercedes-AMG GT 4-Door. But then the Alpina gets its own back in the top speed stakes, with a claimed 201mph, comfortably ahead of rivals’ limits.

Underneath, the B8 runs an all-wheel drive system based on BMW’s xDrive set-up, but with tweaks to the torque distribution to make it more rear-biased. There’s also an Alpina-specific reinforced propshaft while suspension alterations run to Bilstein dampers and Eibach springs. The car also gets an Alpina stainless steel sports exhaust.

Alpina has also rung the visual changes. There’s subtle ‘Alpina’ lettering on the chin spoiler, plus the usual smattering of Alpina badges. This car comes on the optional Alpina Classic 21-inch forged wheels finished in black - they save four kilos a corner, but I’d stick to the standard forged Classics in silver (still 21s), especially as it saves you £1340.

The paint you see here is unique to Alpina and comes in at a punchy £3175. Not cheap, but probably needed: if you’re going to get something as rare as an B8, you might as well give it the special paint as well. The other option is Alpina’s glorious Green metallic.

Inside, it’s a largely BMW affair, albeit with Alpina badging smattered throughout, including a plaque between the front two seats telling you what number car you bought. Ours was 009 - two off a presumably more exclusive number.

The B8 gets the same Merino leather as the normal 8 Series, but is optionally available with punchier colours, in this case an Ivory White/Night Blue combination. The steering wheel is finished in Alpina Lavalina leather, which feels subtly different to a normal BMW ‘wheel - it’s a minor thing, but it’s slightly grippier and, with the blue/green stitching, is another small reminder that you’re in something different.

It is a five-seater but you’d be hard pushed to sit in the middle for long on account of the enormous transmission tunnel. Not an elegant place to perch no matter what sort of trousers or skirt you’re wearing. 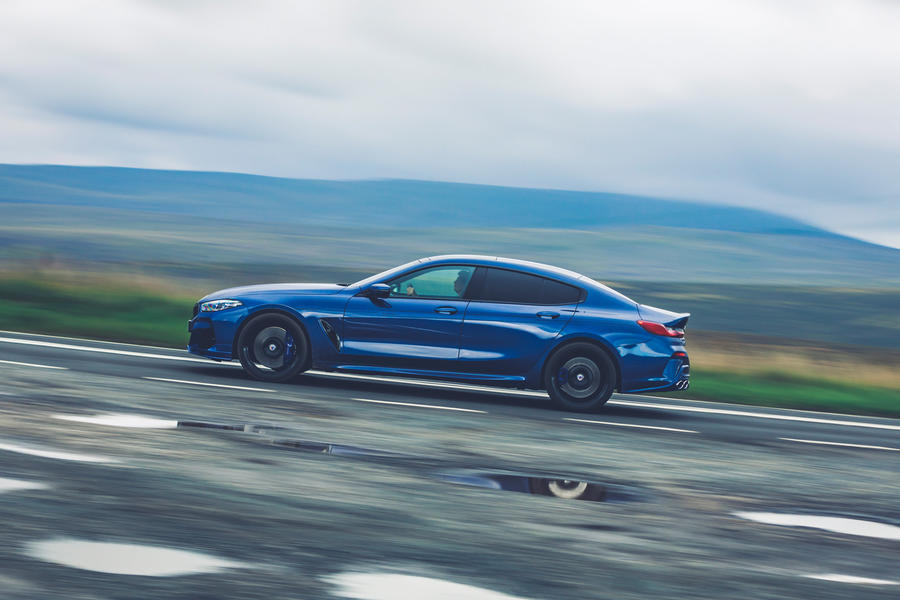 Press the starter button and you’re greeted with a muted growl - this is definitely not a Mercedes-AMG. But within 50 yards you know you’re in something special. The key is the way everything balances together.

The car is extremely fast - the numbers don’t lie - but then so are a lot of electric vehicles these days. But the acceleration is more appealing here, less digital, with a more nuanced torque curve as it climbs through the revs. There’s a slight pause as the twin turbos spool up before everything goes warp speed, but unlike in some other ultra-fast machines, you don’t feel like you’re driving an elastic band.

At first, I found myself a bit ham-fisted with the throttle, stamping more than was needed, with the result that the nose squirmed around while the weight went back on the car’s haunches too much. But then you learn that the throttle is far more controllable than that - breathe on it and you still get the shock-and-awe pace, but with far more control.

Personally, I’d prefer a little bit more exhaust note when the car is in Sport mode. The BMW bark is there when you push on, but I’d want a little bit more from lower down the rev range. Not too uncouth, but a bit more bite - at start-up, it sounds much better from outside than from within.

The steering is delightful. It’s not got the level of feel of an out-and-out sports car, but it’s incredibly linear and precise, with a richness to the fluidity that hints at the engineering effort that’s gone into it.

The same applies to the suspension. Even in Sport mode, the B8 rides with a supple and forgiving flow that makes any journey easier. With Pirelli P-Zeroes made specifically for it, the way it rounds off edges and yet also remains taut through corners is mighty impressive. Even cross axle undulations don’t unsettle it unduly. 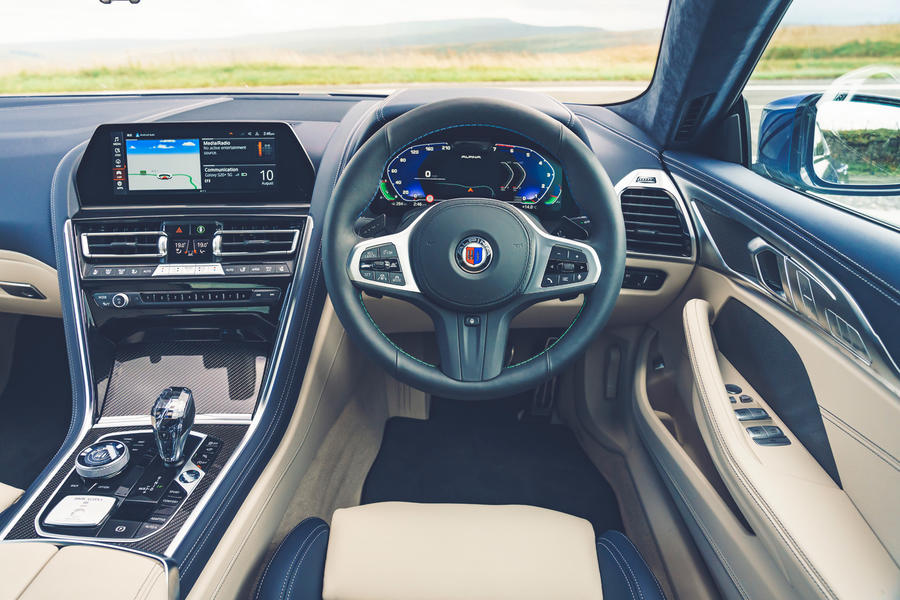 What all this translates into is a car that is just as happy trundling through town, heading across the continent, or a jaunt down your favourite back road. It’s an impressively multiple personality machine, with an additional level of comfort and feel compared to a lot of grand tourers. It’s not cheap - a good £30k+ over the 8 Series - but honestly, you can feel the cost in the engineering.

No doubt it’s helped by the fact that it feels special and rare, so there’s a level of in-built appeal that sets it apart from even pretty unusual cars like a regular 8 Series or AMG GT 4-Door. It’s a recipe Alpina knows well and continues to deliver on. 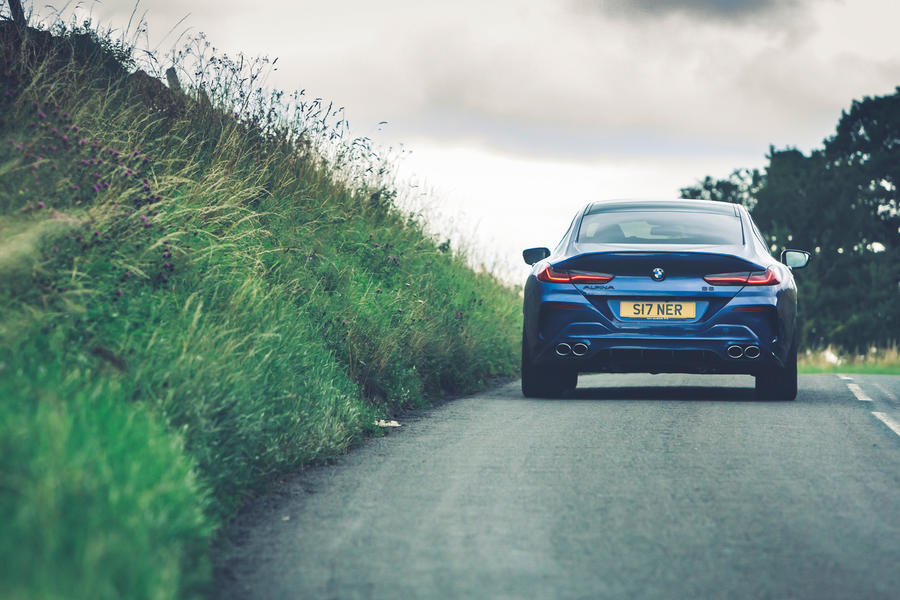 Alpina are producing the well engineered cars BMW used to before getting distracted with having to produce "some dross" to stay in business. The comment about the steering feeling nice and well engineered is supposed to be a standard feature for the marque in general. Despite all, that it sounds like a nice well engineered vehicle which is always a good thing at the end of the day.

If you've got the disposable,then, buy what you want, and, from the article, I guess the extra you pay for it is worth it, and, no doubt there are other car tuners who do a whole lot more inside and out for those who really want noticed.