This may very well be the particular version of the latest BMW 8 Series that’ll matter most to you. Equally, it could be the one in which you’re least interested of all the possible combinations of two-door-coupé, two-door-cabrio or four-door ‘coupoon’ bodies, and six-cylinder petrol, eight-cylinder petrol or six-pot diesel engines.

This is captain sensible: the four-door 840d xDrive Gran Coupe, which sits towards the more affordable end of the showroom range on price and promises to deliver against the brief of a traditional big, desirable grand tourer with an extra dose of pragmatism thrown into the mix. The four-door body is expected by BMW to be the most popular of the three with 8 Series buyers, for what it’s worth, while the straight-six diesel will be trumped for sales mix dominance only by the ‘40i’ straight-six petrol (which is also the only rear-driven ‘8er’ you can buy).

It was the two-door coupé equivalent of this car that underwent the full road test workout earlier this year, when we recorded plenty of praise for the efficiency, flexibility and cruising refinement of BMW’s multi-cylinder diesel motor and for the car’s smart, modern, restrained-yet-sophisticated cabin; while the steel sprung chassis left a little to be desired for GT-appropriate ride isolation but conjured more driver appeal than you might expect of a car so large.

Like the coupé, the four-door Gran Coupe is offered to UK buyers in M Sport equipment level only (which means us Brits get 20in alloys and M Sport upgraded brakes as standard). Those who want to avoid runflat tyres can do so by optioning up the BMW’s M Sport Technic option package, which also includes a further brake upgrade and an active torque-vectoring rear differential – although our test car did without it. 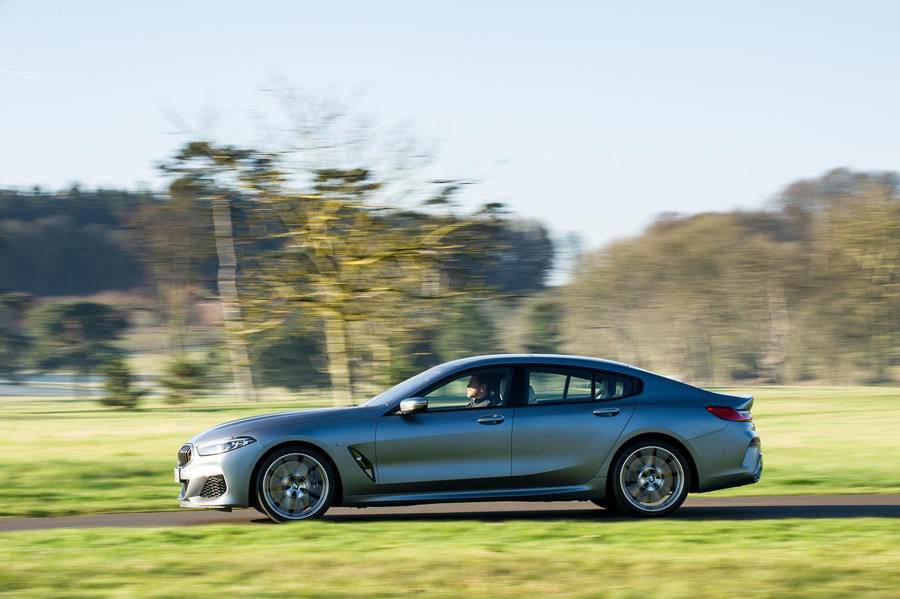 What makes the four-door 8 Series different from its two-door range-mates, beyond the obvious, is a body that extends more than 230mm further in overall length, and slightly further in width and height also; a wheelbase that’s 201mm longer; and a kerb weight that’s some 95kg greater than that of the coupé, but remains slightly lesser than that of the cabriolet.

The Gran Coupe has some identifying styling features, too. The car’s profile is, predictably, the aspect most easily distinguished from that of the regular coupé, with a roofline that extends much futher aft before dipping to meet a shortened rear deck.

Interestingly, BMW has chosen to give the four-door a special bootlid that has a slightly larger and more pinched ducktail spoiler, no doubt in order that Gran Coupe buyers can more easily satisfy themselves that they haven’t settled for the dowdier and more practical version. Does it work? This tester isn’t totally convinced, because while I’d agree that this car is a little less visually desirable than either of its two-door relations, I’d venture that says more about deficiencies in the latter, and of the wider design appeal of this new 8 Series, than it does about the styling of the former. This new BMW flagship just isn’t a spot on the original for traffic-stopping visuals, is it? I’ve heard as much in conversation about the car on several occasions now, and when someone brought along an ‘E31’ to BMW’s UK press launch for the newbie, he helpfully proved as much very plainly indeed.

The car’s interior is less likely to underwhelm, as we’ve written before. Passenger space up front is plentiful, perceived quality is really high and the car’s equipment level is impressive (wireless smartphone charging, digital instruments, head-up display and premium audio as standard).

So much is true whichever bodystyle you plump for, of course. What the Gran Coupe adds are second-row seats which are fairly easy to access, and provide a useful amount of space – though not quite enough that you’d happily travel in the back as an adult of above 6ft 2in. Taller occupants will find the back of the 8-Series reasonable for foot and knee room though a little bit meager for head room, with seat cushions that seem a bit short and a high cabin floor that leaves your thighs floating in mid-air. A Porsche Panamera, Audi A7 and a Mercedes CLS all offer better rear passenger accommodation. Meanwhile, the larger and more accessible hatchback-style boots of two-out-of-those-three rivals mean the BMW also suffers a slight practicality disadvantage for cargo space.

Despite its greater girth and mass, the four-door version of this car carries off much the same gently sporting, fairly GT-appropriate sort of driver appeal as the two-door manages. Ours did without BMW’s optional-fit active rear differential, active anti-roll bars and performance tyres, remember, although it did have four-wheel steering as standard – leaving plenty of room for added handling dynamism to those who want it.

And yet the car handles keenly, grips confidently and controls its two-tonne mass effectively even at high speeds and on testing surfaces. There is consistent weight and intuitive responsiveness about the way it steers, allowing you to place it quite accurately on the road; which, in turn, makes its size seem manageable on tighter roads, and also makes it flow along quicker, wider, smoother ones very effectively.

BMW’s ‘40d’ diesel engine makes a strong case for itself, too. Very quiet and refined by compression-ignition standards and proffering great mid-range torque and strong responsiveness, it seems far from unworthy in the nose of a luxury GT. The powertrain is slick and well-mannered when moving through the gear ratios, and has an outright performance level that comfortably surpasses a sporting mark. The slightly dull, toneless audible character of a diesel engine is its most serious weakness, along with perhaps a lack of willingness to usefully rev beyond 4500rpm. Then again, if it’s a big GT with near-40mpg you’re after, as well as the ability to put more than 500 miles between fuel stops, such intangible things aren’t likely to put you off.

Could the one remaining fly in the dynamic ointment do that, though, I wonder? Like the equivalent coupé we tested before, the 840d xDrive Gran Coupe certainly rides in quite firm and insistent fashion for a big luxury car. Like the two-door, it seems to suffer a relative shortage of ride isolation and dynamic versatility related to the fact that BMW picked adaptively damped steel coil suspension for it instead of the latest adaptive air suspension, which is increasingly common on big GTs.

Even on runflat tyres the ride is more busy than noisy, settling down a little over bumps if you pick ‘comfort’ driving mode – but not enough to feel like it’s soaking them up like some of its competitors might. 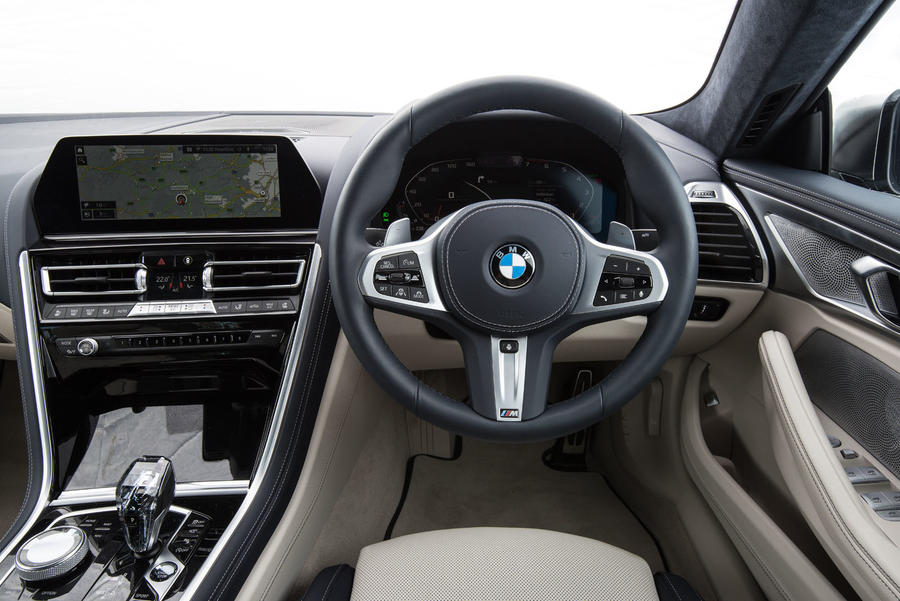 It’s certainly not a straightforward recommendation to contemplate. In some ways, this 8 Series would fit into your daily motoring better than any other. You could use it like a 5 Series, get comparable daily fuel economy and practicality out of it, and make your motorway miles quite a lot more special by the substitution.

To look at it another way, though, this car would be a pretty plain-looking and clinical way to replace a more traditional, beautiful, exotic GT coupé. While it’s very dynamically competent, it’s not soulful or particularly enticing to drive; while it’s lovely to be in, it’s not that lovely to look at; and while it’s practical and pragmatic enough, it doesn’t cosset or cocoon you like the very best luxury cars of its size and price.

The BMW 840d xDrive Gran Coupe is, in short, an unusually rational car in a part of the motoring landscape where they’re not generally called for, yet it doesn’t quite get over the line in rational terms alone. Moreover, its few attempts at reaching out on an emotional level as often fall flat as hit home. It’s good in parts, clearly – but still probably not the 8 Series most would want. 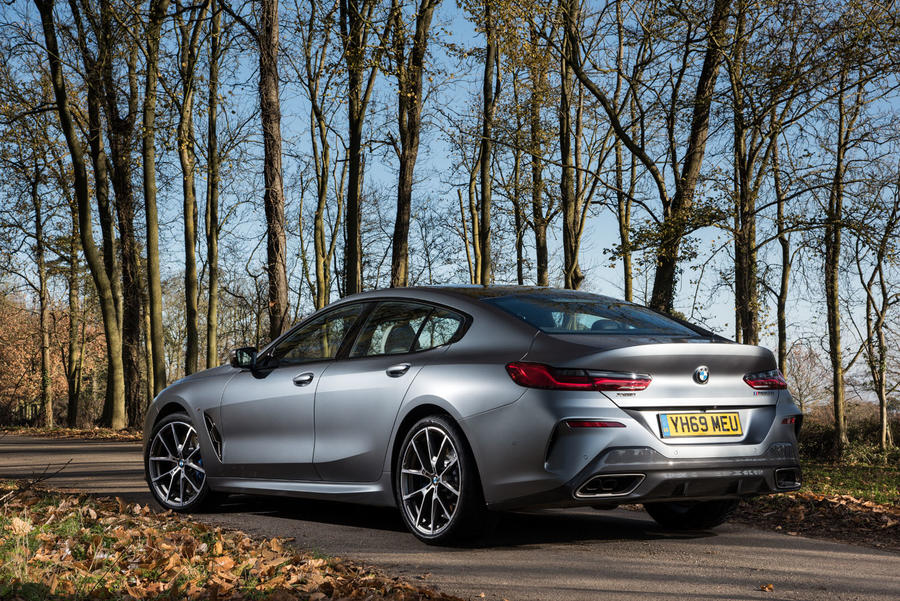 Look out for people like me who cannot even afford the door of this thing, "commenting how their problem is the fast depreciation of such cars. My friends, we can only sit back and watch rich people changing their toys very frequently, this is not a problem of the car.

How the hell did they make it

How the hell did they make it weigh 2 tonnes !!?

.....it's a big car, with a heavy diesel engine, everthing is driven by heavy electric motors, it has more electrical toys than a branch of Curry's/P.C.World, and it needs to pass collision tests that most planets would fail!
s1mong 12 December 2019

Is it really a 6 series

I do like BMWs but I can't help but feel that this car is handicapped by its underpinnings and its ambitions. It is trying to sit as a 7 series alternative but is based on the 5 series and I am sure will be easily mistaken for the new 4 series when it is launched.

Good job it accelerates nearly as fast it will no doubt depreciate.

I do like BMWs but I can't help but feel that this car is handicapped by its underpinnings and its ambitions. It is trying to sit as a 7 series alternative but is based on the 5 series and I am sure will be easily mistaken for the new 4 series when it is launched.

Good job it accelerates nearly as fast it will no doubt depreciate.

What actual difference does it make whether it's 'based on' the 5 or the 7?

What are the differences between the 'underpinnings' of those cars and how do they affect the purchaser of an 8?