7
BMW M's flagship gains a four-door variant. Is it a more appealing prospect? We find out on UK roads
Open gallery
Close

Viewed in an entirely objective sense, quite an appealing prospect. The M8 Competition Gran Coupé is the latest four-door that aims to take the excitement and driver focus of a large, premium sports car and combine it with real everyday usability.

Aimed smack bang at Porsche’s Porsche Panamera and the literally named Mercedes-AMG GT 4-Door Coupé, the elongated M8 fulfils this multifaceted brief with the help of a 201mm wheelbase increase over the regular two-door model.

Better still, you pay no premium for your additional length and extra pair of doors. In fact, it’s £2500 cheaper than the coupé – although that’s unlikely to matter a great deal to the average buyer when the car in question already storms past the £120k barrier before you’ve troubled the options list.

Whether you prefer the classic large coupé design or this svelte four-door is a matter of taste. One thing's for sure, though: buyers tend to favour the four-door, which is why the large premium two-door market will soon lose another challenger in the Mercedes S-Class Coupé and Convertible, soon to be wheeled into retirement with no replacement planned.

Underneath the bodyshell, the Gran Coupé is mechanically identical to the standard M8, with the same 616bhp twin-turbo V8 and trick four-wheel drive system that can be switched purely to rear-wheel drive as part of the bewildering array of drive modes. The only difference, of course, is the size (length is up to a touch under 5.1m) and weight (now over two tonnes and not far off the M8 Convertible). 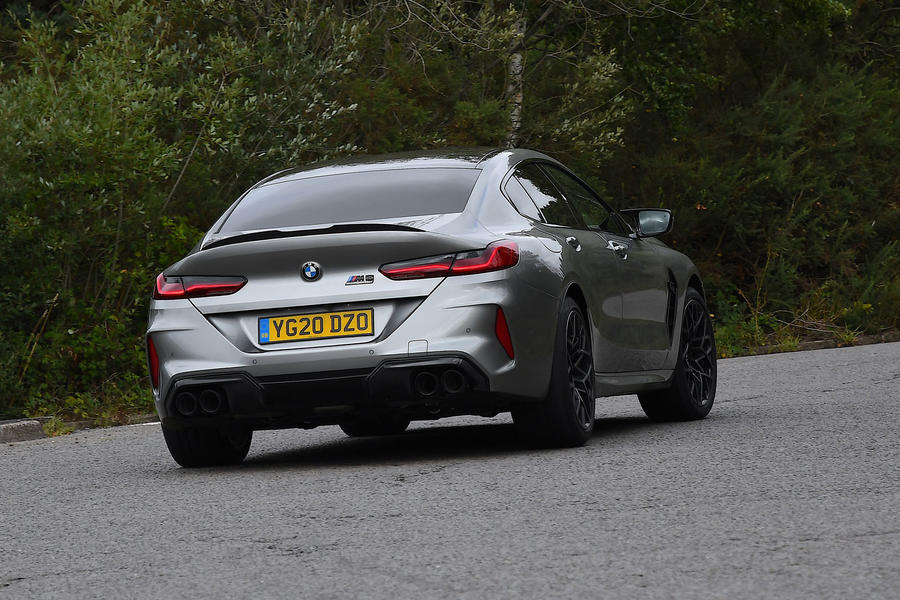 It has the potential to be a consummate all-rounder. The new-found length means six-footers can stretch out in the back, with only minor head room grumbles on account of the sloping roof. The boot is 20 litres more generous than the coupé's, too, although that’s hardly a deal breaker.

There’s even a ski hatch, itself more useful than the middle seat it occupies, which is effectively unusable for all but small children on account of the hefty transmission tunnel and climate control panel. Still, there’s a fast 5 and 7 Series if you must frequently carry three in the back.

The weight and dimensions are important to consider as they make the M8 Gran Coupé a good chunk longer and a fraction wider than the already pretty unwieldy-for-Britain Panamera. Only the aforementioned Mercedes-AMG (I'm not repeating its full name again) is wider.

All three cars definitely seem more at home on wide, well-sighted German or American Tarmac. The M8 in particular suffers from a narrow windscreen field of vision and long bonnet where you cannot make out the extremities of the front-end. At low speeds, you’ll be making prodigious use of its clever virtual-reality parking camera system, with cameras that actually rotate with the steering lock.

The size remains in the front of your mind when you open up the taps, although you may be distracted by the baffling array of configurable drive settings. There’s the usual three-stage system for the chassis, steering, brakes, all-wheel drive system and engine map, but also a separate switch on the gearshift for change ferocity and two preset buttons on the steering wheel. You can also choose from three modes for the instruments and head-up display.

Spend time finding the sweet spot (ours was engine in the middle setting, dampers in the softest setting and 4WD into Sport) and you’ll find the M8’s dynamic capability to be very strong. Body control, composure and agility are commendable, and the all-wheel drive system always feels rear-biased. More so when you switch the DSC to fully off and select 2WD mode, where it becomes entertainingly playful in the right scenario. Only the distant feel and odd weighting of the thick-rimmed wheel is a black mark.

We’ve not got many complaints about the way the twin-turbo V8 delivers its performance. With so much of it on offer, you’d need the world’s finest internal accelerometer to detect the Gran Coupé’s extra weight over the two-door version - both claim the same 0-62mph time, for example. It’s not an explosive engine or one bristling with aural character, but it’s mightily effective when called upon and pleasingly docile when not.

Like the two-door M8, then, the Gran Coupé still does an agreeable job of feeling like an oversized sports car. Trouble is, roads where you can uncover its capabilities are infrequent in the UK, so most of your time is spent with disciplined metering out of its considerable performance reserves while you attempt to keep it within the slim boundaries of your lane. There are flashes of brilliance here, but only when you push on.

Sadly, it’s when you wish for the M8 to slip into the GT car role that it falls at the first hurdle and the Gran Coupé is no different. The ride is brittle and noisy enough in Comfort mode that we had little interest in the tougher damper settings. Like most tautly-damped performance models it improves with speed, but arguably a car at this end of the market with such strong competition should be able to play the Jekyll and Hyde dual roles with more aplomb. A 911 is no less comfortable.

And that’s a pity, because the M8 is a nice place to sit. Despite the typically excessive drive modes and driver assist functions to deal with (ie turn off), the major controls are intuitive and BMW’s iDrive remains the benchmark for on-the-move usability thanks to its second-nature rotary click wheel. Materials are plush, too, and the seats are superbly comfortable and supportive. It doesn't radiate a particularly special feel, however, with much of the technology and switchgear lifted from lesser BMWs.

Whether or not the £20,000 (gulp) Ultimate Package fitted to our test car - bringing carbon exterior bits, rear and side sunblinds, interior equipment upgrades, carbon-ceramic brakes and more - is worth it is up for debate, too. 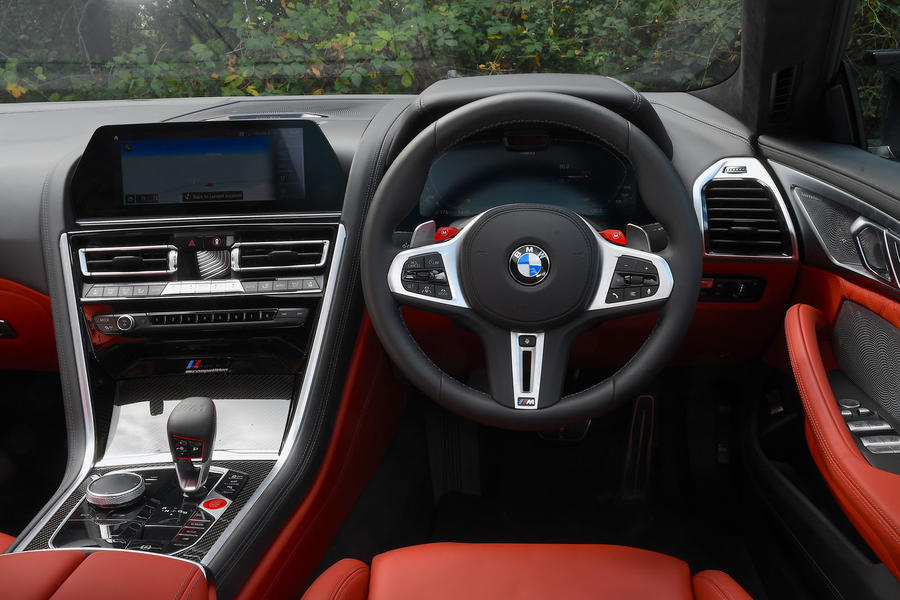 The Gran Coupé is the most usable M8, that's for sure. But herein lies the nub of the problem that also afflicts the two-door M8. You see, its rivals are similarly competent and capable when the scenery starts getting blurry, but most either offer more character or are the more rounded prospects when it comes to being GT cars.

The M8 Gran Coupé still feels like a car with a confused personality. The posh cabin is at odds with its road-racer feel and stiff set-up, meaning that it’s not ideally suited to the role of a grand tourer. But it’s too large and complicated to deliver the engaging, thrilling-at-all-speeds driving experience that a traditional sports car offers.

As it stands, BMW’s own BMW M5 is nearly as exciting to drive but is a more practical, comfortable and significantly cheaper prospect. And if you must have the svelte looks and premium image of the 8 Series, the still plenty fast enough M850i feels better set up for British roads. 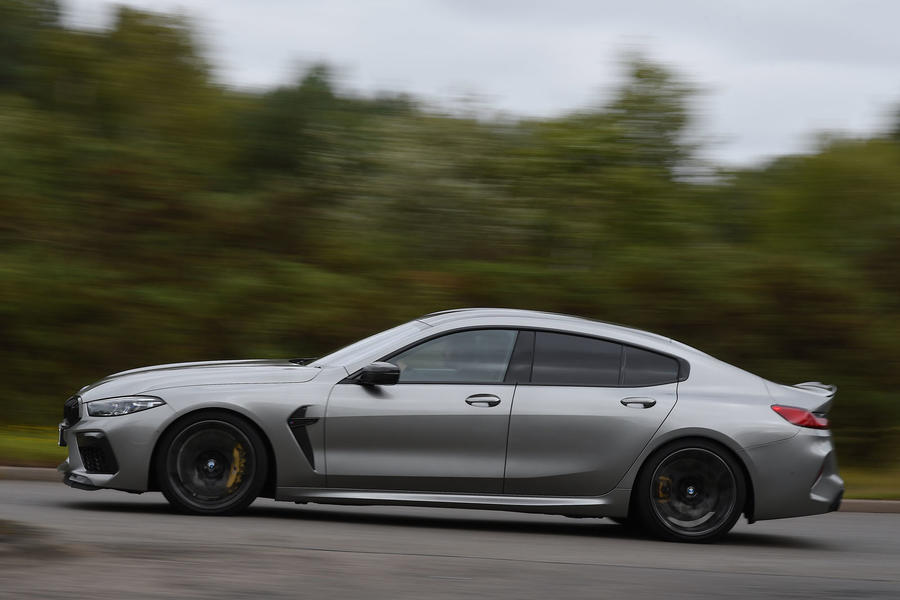 This might just be the first and last time we here about this,and it's German rivals. Put simply, I just don't think there is a market.
This car has pushed way past the 100K barrier for even the most affluent to consider. Wandering into your local BMW showroom and seeing this car would impress but actually handing over the dosh... I just don't see it. They'll be a small voice in one's head saying, "don't do it!"
My guess would be to hang on for 3/4 years and pick one up for £39,995 if indeed you find one. Greed. It's such an ugly word, so stop mugging us off.
abkq 28 August 2020

Try again as Autocar has the

Try again as Autocar has the habit of deleting posts.

Those perfectly laid out analogue dials with orange backlighting and handsome graphics are long gone.
If digital instruments are here to stay at least try to make them look more classy. This BMW fails miserably to do.

Hey Autocar, if you

Hey Autocar, if you photograph the cabin with the engine on we can see what the dials look like. Or maybe you were just trying to save us from remembering another great BMW design detail that's been binned by their awful design team?

Hey Autocar, if you photograph the cabin with the engine on we can see what the dials look like. Or maybe you were just trying to save us from remembering another great BMW design detail that's been binned by their awful design team?