From £74,6529
Puts the Panamera back on equal terms with top-end rivals on paper. Goes and handles well enough to beat most of them on the road.
Open gallery
Close

The competition that has materialized at the expensive end of the market for fast four-door GT cars of late has evidently come as something of a surprise to Porsche. When the company introduced the second-generation Panamera in 2016, 542bhp was considered to be plenty for the Turbo version. Then along came the Mercedes-AMG GT63 S, Audi RS7 Sportback and BMW M8 Competition four-doors, all offering enough grunt to put the ‘big’ Porsche well and truly in the shade – which, needless to say, is not somewhere Porsche is used to being.

That’s not counting the fast-but-heavy, 671bhp, petrol-electric Panamera Turbo S E-Hybrid, of course, which by Weissach’s own admission serves slightly different purposes and tastes than more typical and traditional performance GTs; and, as part of the wider refreshed 2021-model-year Panamera model range, there will be a new top-of-the-range Panamera ‘PHEV’ along in a little while, by the way. For those who like their big, fast executive cars more old school in flavour, however, there is now this: the Panamera Turbo S.

The car uses a quite widely updated version of the ‘EA825’ 4.0-litre twin-turbo V8 that Porsche has been building in Stuttgart for the whole of the VW Group since 2016 – and it’s the first car in the group to benefit from the new crankshaft, pistons, conrods, turbos and fuel injection system that Porsche has just fitted to that engine. Why not just shoehorn a more powerful version of the existing V8, such as the one from the Lamborghini Urus or Audi RS6 Avant, into the Turbo S instead? Well, you couldn’t, apparently. The ‘MSB’ platform the Panamera uses has a tighter engine bay than the ‘MLB-Evo’ layout used by the likes of the Urus, Bentayga, Cayenne and RS6, and it also obliges a twin-clutch rather than torque converter automatic transmission.

Outside of the engine bay, Weissach’s efforts to refine and improve this car’s driving experience are mostly delivered by software retuning. Much was learned about the MSB platform’s three-chamber air suspension and ‘PDCC Sport’ active roll cancellation systems during the development of the all-electric Taycan, and the Panamera gets some inherited electronic gains as a result. It has also been updated with the same four-wheel steering calibration that Porsche’s latest 911 and Taycan sports cars use. Mechanical hardware changes are very few: front suspension and engine mounts are new, but that really is it. 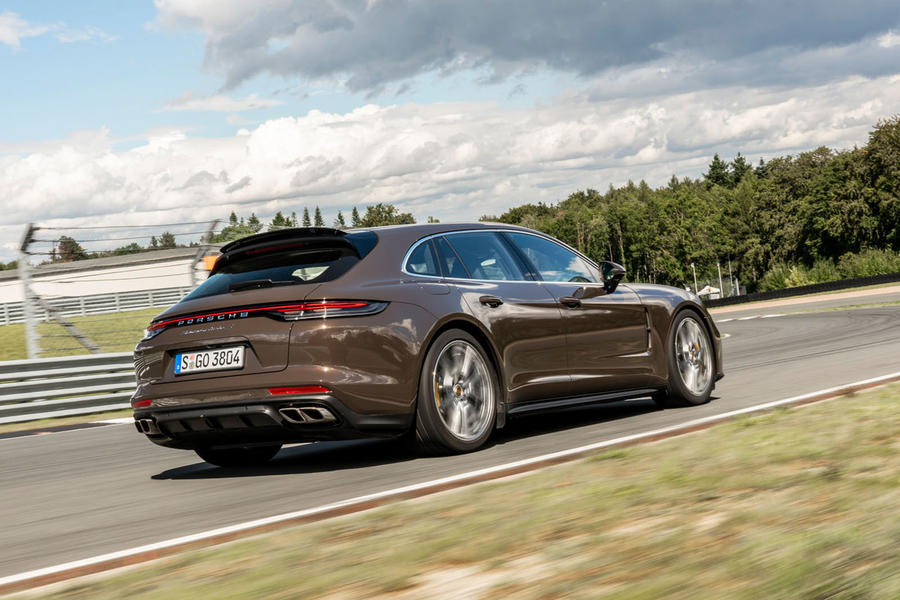 Like every Panamera, the Turbo S comes in standard fastback and‘Sport Turismo’ shooting brake bodystyles, and in some markets in an extended-wheelbase ‘executive’ version as well. Four years ago, when Porsche introduced the wagon version, it gave the Panamera a clearer visual identity of its own than it had previously – and today, it’s still the ‘ST’ version that looks the best, I reckon.

The extra rear-seat passenger space and cargo volume would be deal-sweeteners, too; at 6ft 3in, I can sit in the back of a Panamera ST with enough legroom and headroom to be comfy over long distance, and can’t quite do so in a regular Panamera. Interior updates to the car are likewise few in number; there’s a revised steering wheel design, some new trim materials, and some updates to the car’s infotainment system so that it both charge your smartphone and connect to Apple Carplay wirelessly.

That revised engine and new exhaust makes the Panamera Turbo S both noisier and quicker across the ground than the old Turbo, but – although the old Panamera Turbo was anything but slow – it’s the improvement in roll-on acceleration that you really notice. Even with this much boost and torque in the mix there’s good part-throttle engine response, and drivability is great. But bury the pedal and the car really takes off from well under 3000rpm, and in anything below 5th gear. Ring out the revs and it feels every bit as rapid as that staggering 3.1sec 0-62mph claim suggests.

This tester would still prefer a bit more burbling muscle car character about the car’s exhaust note, mind you. The new V8 is more interesting to listen to than the old one was, when working hard under load and when just pulling matter-of-factly through the gears under little strain – but it’s still not a gargling, bleeding-heart soprano like a supercharged 5.0-litre lump from Jaguar or the 4.0-litre turbo from AMG. That you have to crack the driver’s window to really hear it says a lot. That apart, though, this is a very impressive powertrain about which you’d change very little, and it makes the non-hybridised Panamera feel like a proper big-hitter.

Porsche’s suspension tweaks seem to have delivered improved close body control for the car, making it better tied down and more consistently in touch with the road surface at high speeds than the pre-facelift car did. There is still just a hint of float about the ride over bigger vertical inputs when you’re using the softer-set drive modes, but ride isolation is nonetheless good.

Lateral body control, grip, handling response and chassis balance are all remarkably good for such a big car too, and the steering feels a shade more communicative than it used to, so you can place the car with real precision and keep it locked on line under power. It’s not quite like a Taycan for outright incisiveness, but it’s not far adrift; great for something this size and weight, in other words. Unlike in the BMW M8 and Mercedes-AMG GT63 S, there’s no rear-wheel drive mode for the all-corner driveline, and so the car isn’t such a hooligan to drive on the limit as those two can be. Even so, the Panamera Turbo S is anything but unengaging when driven quickly. 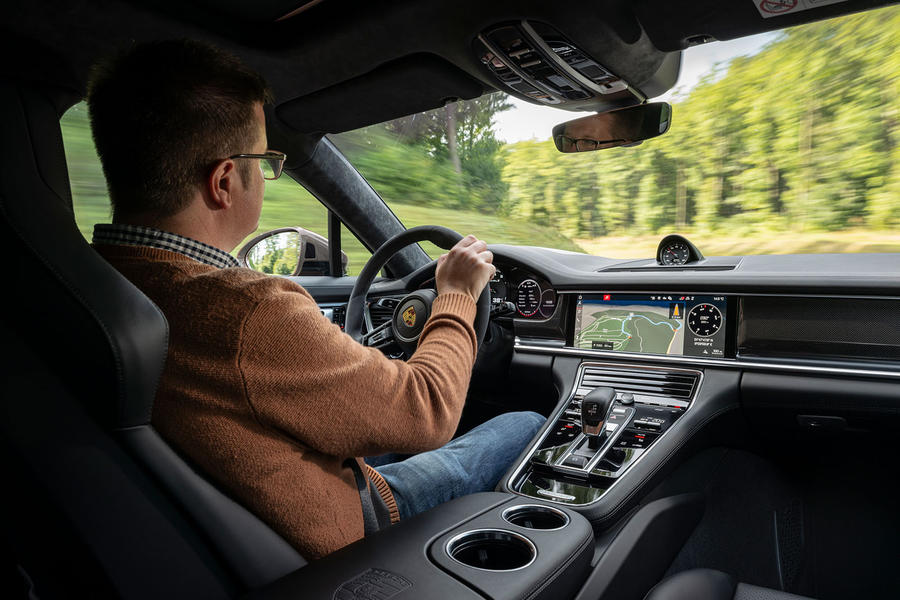 The Panamera Turbo S Sport Turismo is one of those cars from this current breed of extra-desirable, extra-rapid, luxury-minded, family-friendly GTs that promises to do it all, but certainly only for a price. To call it expensive would be undoubtedly true, if a bit unfair in light of the fact that it only costs as much as several other cars of its ilk.

But if you’re ready to pay super sports car money for something a shade more special than an ‘ordinary’ super saloon, to use pretty much every day and for any purpose, this car does seem to represent a bit of a sweet spot. In ‘ST’ bodystyle it has saloon-trumping space and practicality, packaged with those extra-special looks. Though it’s big, you wouldn’t know it from the flat, agile, incisive way it handles; and yet it retains impressive ride comfort and long-distance touring manners.

Moreover, in Turbo S form, the Panamera is now as powerful and rapid as any direct rival, and is better to drive than most. And while it isn’t quite as naughty or exuberant of character as some V8 GTs, there’s just a hint of buttoned-down maturity and ungarnished purposefulness about it which is somehow quite typical of Weissach, and which you might quite like. 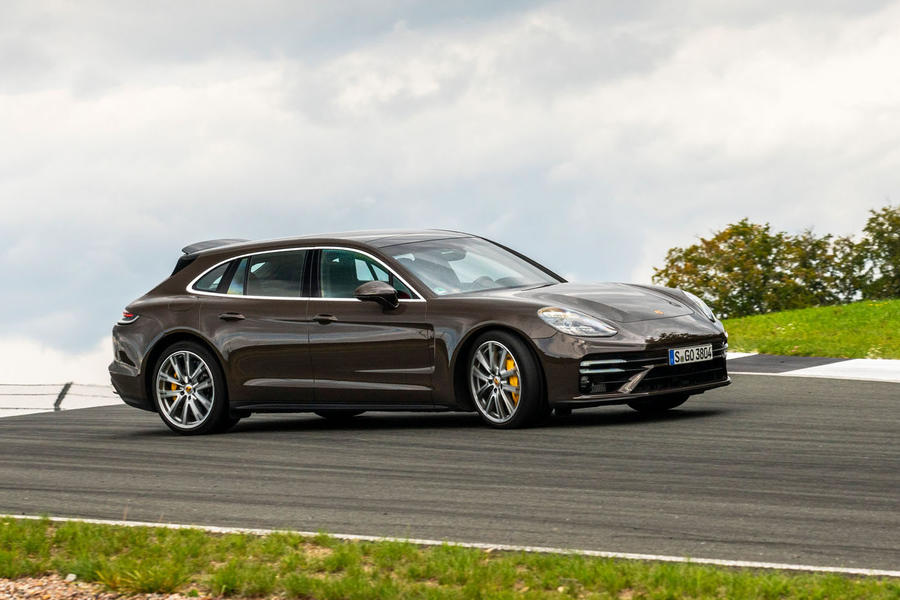 Over 2100kg's! About as irresponsible as a combustion engined car can get.
Peter Cavellini 23 September 2020

I like the dash layout, it's not covered in buttons etc, the gear change is in a nice position and I agree, it isn't a pretty shape but if a six foot plus can sit in the back for an hour or two that helps, and if your paying this much for transport, mpg isn't a real concern, the body color of this car is a bit weird, non descript which didn't help with the look in general,and no, I haven't seen that many either.

I cant remember if Ive ever seen something so big, ugly and expensive. Come to think of it I cant remember the last time I saw one on the road, which is no bad thing.