There aren’t many cars that have road testers reaching more hurriedly for their diaries than a new Alpina, and that’s because these rarely seen Bavarian wonders marry character and usability in a way that never fails to generate significant levels of real-world appeal.

In this case, that’s especially true, because the new B5 BiTurbo – a car we’ve driven before but not in this country, not on the road and not in saloon form – is perhaps the ultimate expression of what the company does best. Remarkably similar to an M5 on paper, it trades a small degree of handling precision for greater overall ride comfort that, of course, sounds very appealing for real-world driving.

Even for those aware that Alpina is about more than deco pinstripes and decadent power, the specification of this new 205mph mega-saloon will make for invigorating reading. It starts life as a 456bhp M550i, which is a model never before offered in the UK but relatively popular Stateside.

The 4.4-litre ‘N63TU2’ V8 is given a wider-bore intake and new twin-scroll turbos that operate in parallel. A new intercooler is subsequently fitted along with a brace of additional radiators, another oil cooler, as well as uprated pistons and spark plugs.

Alpina then installs a lightweight exhaust – complete with a switchable valve – that reduces back pressure and results in a grand total of 600bhp at 5750rpm and 590lb ft at 3000rpm, although four-fifths of that colossal torque comes into play at just 2000rpm. It’s channelled through a paddleshift-operated eight-speed ZF torque-converter transmission, which has also been tweaked.

The resulting performance figures – 0-62mph in 3.5sec and 0-124mph in 11.4sec, using the car’s launch mode – are all but indistinguishable from those of an M5 and nip at the heels of the mid-engined supercar fraternity.

Yet, despite the supercar powertrain, it’s the chassis where Alpina really leaves its mark on BMW’s preliminary efforts. Shorter, stiffer springs have been fitted, and the Touring version’s rear axle is suspended pneumatically.

The front axle also benefits from an entirely bespoke wishbone design that applies a degree more negative camber. If any one thing illustrates the lengths to which this company will go to engineer into the chassis a uncommon combination pliancy and dexterity – one that makes the cars seem almost indispensable to many owners – it’s this.

The B5 BiTurbo is also the first time that Alpina’s take on a red-hot 5 Series uses either four-wheel drive or the active roll stabilisation currently favoured by manufacturers of quick SUVs. Even with all the extra hardware, the car is a touch lighter than the previous generation. 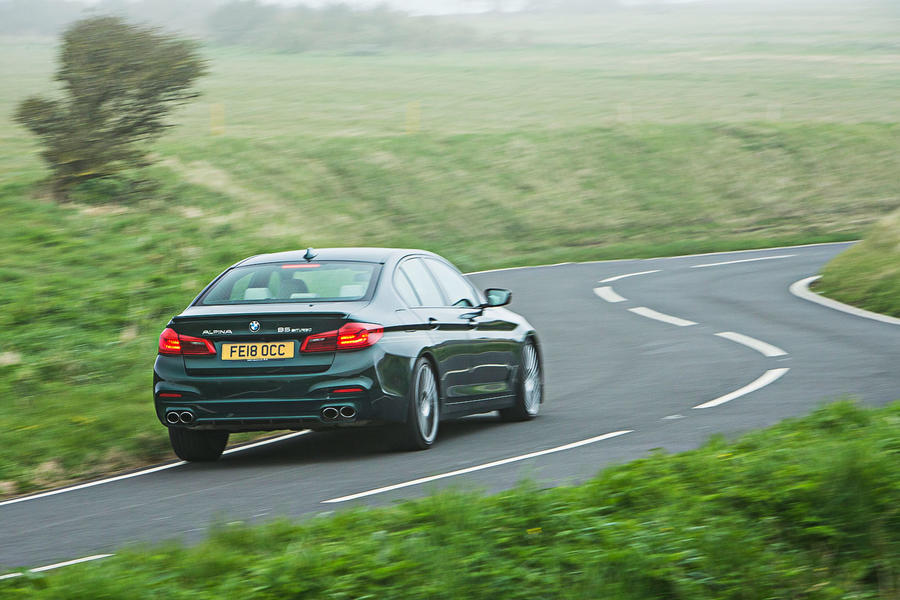 At £2200, the Alpina Green paint seen here is an expensive option, but with the gold deco set decals, the figure this car cuts is simultaneously one of presence, beauty, subtlety and menace. How many other cars can you name that pull off such a trick? In fact, were you to park an M5 alongside this car, it would be BMW’s in-house effort that would by some margin appear the more ordinary.

Slide aboard and it’s plainer, more demure. The digital dials have been reskinned in blues and green, and there's similarly hued stitching on the steering wheel. You might also notice the car’s individually numbered plaque just behind the rotary controller for the excellent iDrive infotainment system, which is carried over lock and stock from the donor car. Elsewhere, it’s fairly unadventurous in our test car but satisfactorily luxurious.

Architecturally, it’s straight up 5 Series and therefore really rather good.

BMW’s ‘comfort’ seats would normally set you back £1265 but they’re standard in a B5. Not only would both a ballerina and her body-builder husband have no difficulty setting these chairs to offer long-distance comfort and support, but they can also be set meaningfully low, for which you’ll be grateful when the time comes to uncork that herculean V8.

Do so – even tentatively – and progress never feels anything less than extraordinarily brisk. But it’s never brusque, and that’s the magic of this saloon. From 3000rpm, the torque of the engine propels a 1950kg chassis like a leaf in the wind, and while nobody ever needed this much power, its latency is omnipresent and that’s a warming sensation.

This engine is also less reliant on synthesised tones than its M division cousin, and a muted but sweet thrum is well in keeping with Alpina’s discreet persona. Some might consider the big-bore brace of double-barrelled exhaust tips to be slightly misleading and maybe the timbre could do with just a little more bite. Personal taste and all that.

But what of the ride? There’s usually a suspicion with Alpina cars that road noise and the intrusiveness of ripples, potholes and so forth could be mitigated that bit more if only the hallmark multi-spoke alloy wheels were just a fraction smaller, but here that’s not the case.

The broad dynamic repertoire of the adaptive dampers and the B5’s new suspension kinematics somehow find a way to breathe in time with almost any stretch of Tarmac, and you would have to be travelling at a rate far above the legal limit to catch this chassis falling a step behind the topography.

So undemanding of its driver is the B5 that you don’t automatically appreciate the level of mechanical finesse, with the car working its custom Pirelli P Zero rubber much harder than it ever lets on. Its natural gait seems to be at seven or eight-tenths, at which point the ride is superbly cushioned and body movements quickly but deftly controlled.

Beyond that, there’s an element of float in the suspension and the body has a tendency to pogo, but by then you’ve rather missed the point.

As luck – or fastidious engineering, perhaps – would have it, you needn’t push particularly hard to enjoy the neutral balance of this chassis, not least because Alpina’s recalibration of the M550i’s rack means that it feels natural to place the B5 precisely where you would like it. The roll rate is also gloriously judged and compels you to lean on the front, set the rear and then drive through a corner with such purpose it’s as though it were your calling in life.

For £2500, Alpina will also fit a mechanical limited-slip differential hand-built by Drexler, and you’d be wise to tick that box. With such a massive contact patch, there are deep reserves of grip, but gently overload the chassis through a suitable parabolic bend and the B5 feels light on its feet, eventually pushing through only a veneer of understeer before the rear axle starts to swing into an effortless and controllable slide.

Such behaviour is peripheral to the B5’s true purpose; that it will nonetheless indulge its driver so wholeheartedly is testament to this car’s incredible breadth.

One more thing: our car’s high-performance brakes system – a £1400 option that adds lightweight composite discs – felt intuitive for stops both heavy and light, although Alpina warns that it can be noisy compared with the standard cast-iron set-up (not that we noticed). For a relatively modest additional outlay, it’s worth having. 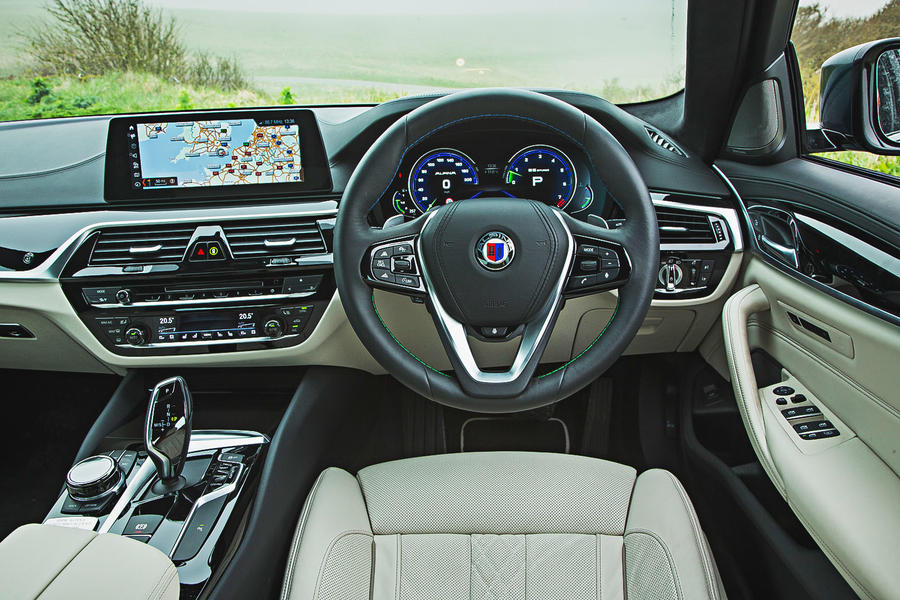 The question here is: why would you not? A Mercedes-AMG E63 S 4Matic has a more overt character, if that’s your kind of thing, and the playful new M5 has better body control with a front end that brings new meaning to the words ‘nailed on’ in this segment. Both would be immensely pleasurable to own, and the B5’s appeal runs parallel to those cars.

As always with Alpina, it’s too easy to bleat on about taste, rarity, comfort and discernment in a way that soon becomes tiring. But the fact is it’s true. Fewer than 100 of these F90-generation B5 BiTurbos are expected to see the light of day, giving owners a level of exclusivity unknown to all but those lucky enough to possess multimillion-pound supercars. It’s also difficult to call to mind a car so utterly at ease in its own skin or so untroubled in day-to-day driving and yet has a sense of fun.

There will be plenty more written about the B5 BiTurbo on autocar.co.uk – not least by way of M5 comparisons arbitrated by Messrs Frankel and Prior – but first impressions on British roads suggest it is an exceptionally well-conceived, immensely covetable machine. 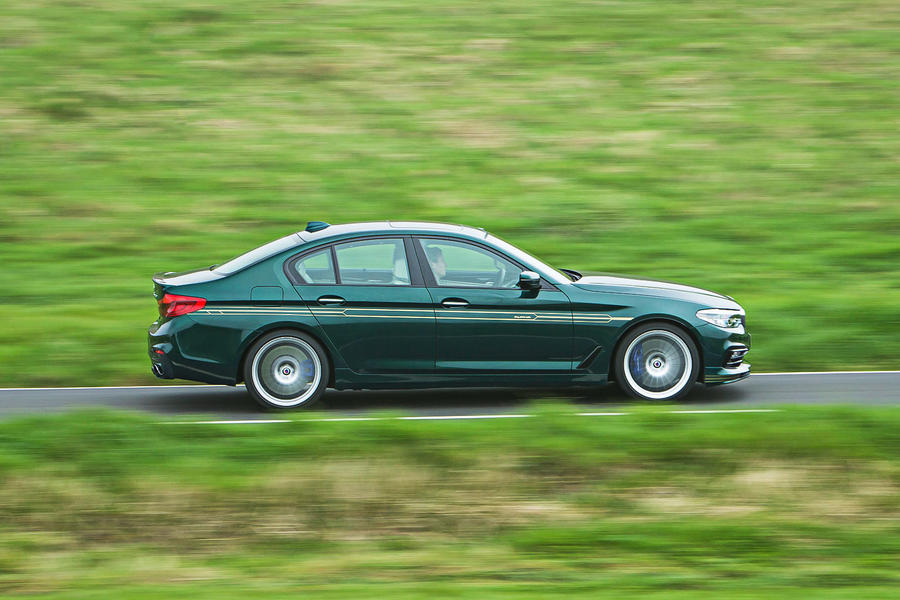 Its even better than your options - 608bhp

Autocar has no issues giving top of the range sporty Fords and (of course) various JLR models 5 stars at the drop of a hat, but somehow chooses not to award the same to immensely capable and complete cars like the B5 or for that matter, the M5! How come?

Peter, take your pick from myriad leather applications to stop staining and you'll be able to wear what you want. Applied on several of my previous cars and the cream was as bright as new when I sold them. No problem.

Matt Hall@, thanks for the info, just a preference

Didn’t realise , lazy on my part, darker interiors hide the dirt, a damp Cloth wipeover is all I ever do in mine ,seemed to work fine.