BACK TO ALL NEWS
Currently reading: BMW 4-Series GT Electric key to firm's future plans
UP NEXT
Shame to Lusso you: A eulogy to the last four-seat Ferrari GT

The electric 350bhp 4 Series GT will go on sale in the UK in 2020; Tesla Model 3 rival will be priced below £40k
Share
Close
Share story

A major realignment of BMW’s strategy is set to result in electric versions of up to three models in its current line-up — including a secret zero-emissions variant of the upcoming 4 Series GT — alongside new and updated versions of its dedicated electric i-brand models within the next three years.

The battery-powered five-door liftback 4 Series GT is tentatively scheduled to go on sale in the UK in 2020. It is one of a raft of models to be based on the newly developed underpinnings of the eighth-generation 3 Series, according to highly placed insiders at the German car maker.

BMW is already aiming for 100,000 combined electric and hybrid sales this year under plans recently revealed by chairman Harald Krüger.

The electrically powered 4 Series GT model has been conceived to offer performance on a par with the fastest of today’s 3 Series GT models, the 317bhp 335d GT, together with an overall range of up to 311 miles (500km) and a starting price of less than £40,000. The intention is to allow it to compete with the Tesla Model 3.

The new 4 Series GT is set to be launched in petrol, electric and plug-in hybrid variants in 2019. It will act as a replacement for today’s 3 Series GT while indirectly replacing the slow-selling 4 Series Gran Coupé in a move similar to that set to be taken by the larger and more expensive 6 Series GT. Less than a year after that, BMW will introduce the electric variant of the new five-seater.

BMW is weighing up two electric driveline options for its new Model 3 rival, with a decision expected by the end of this year prior to the construction of road-going prototypes early next year.

The first uses a frontmounted electric motor in combination with a fixed-ratio gearbox and so-called electric propeller shaft to channel drive to the rear wheels. This layout would provide the new model with traditional BMW traits and, according to at least one source, the best possible weight distribution.

The second, more complex and costly solution proposes the use of two electric motors, one mounted up front driving the front wheels and a second at the rear within the axle assembly to drive the rear wheels. Similar to the system that is set to appear on the electric-powered X3, it offers the choice between front and four-wheel drive, depending on the drive mode selected.

To achieve performance targets similar to those of the 335d GT, BMW is banking on a total output for the electric motor set-up, whether as a single unit or dual units front and rear, of around 350bhp.

The capacity of the battery to be used by the 4 Series GT Electric will be dictated by early engineering targets that call for it to offer a range of at least 311 miles. Early estimates suggest that the lithium ion unit would need to be around 90kWh in order to achieve this, although advances in cell performance and energy density, in combination with new methods of liquid cooling, could allow the capacity to drop to 70kWh.

Read our BMW i3 review here

BMW’s first battery-powered version of an existing standard model will be a zero-emission Mini hatchback, due next year. That will be followed in 2019 by an electric variant of the upcoming third-generation X3. Already well under development, they are part of BMW’s plans to extend the reach of its electric car line-up in the face of increased competition. 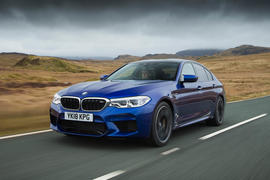 Although BMW is banking on the Mini Cooper E and X3 Electric to extend its electric car sales in the short term, it is the new 4 Series GT Electric that Krüger considers key to the firm’s long-term plans.

BMW’s previous strategy for its line-up was to group all of its pure-electric models under the auspices of its i brand. The decision to dispense with that and instead add electric versions of its standard models comes in the wake of a number of recent announcements by the company’s traditional premium-brand rivals about their electric car plans.

Jaguar recently revealed that a production version of the well-received I-Pace concept will be unveiled before the end of this year. Mercedes-Benz has confirmed a €10 billion (£8.5bn) investment in new electric car development and its new EQ electric car brand, and Audi is now less than 12 months away from the launch of its first dedicated electric-powered series-production road car, the e-tron quattro SUV.

The move also coincides with the launch of a number of potential new electric car rivals for BMW. These include Faraday Future, Lucid Motors and Nio (previously NextEV), all of which have recently revealed near-to-production-ready prototype versions of their initial models in the form of the FF 91, Air and ES8.