BACK TO ALL NEWS
Currently reading: All-electric BMW i8 in the works
UP NEXT
Tesla to expand select UK Superchargers to other electric vehicles

High-tech sports car could ditch its 1.5-litre three-pot hybrid powertrain for an electric system; but first the current car will get more power and a facelift
Open gallery
Close

BMW’s i division will build a prototype battery-powered i8 which could result in the sleek coupé switching from a petrol-electric hybrid powertrain to fully electric propulsion in the future.

The secret programme will give the i8 a significantly larger battery and a trio of new high-revving electric motors in place of the hybrid system it uses today. The move comes as BMW i division seeks to ramp up its research operations ahead of a confirmed expansion of its existing two-model line-up around the turn of the decade.

The plan is for the electric-powered i8 — which may be pressed into action as a successor to the current i8-based Formula E safety car next year — to be based around the carbonfibre structure developed for the BMW i division’s fuel cell prototype, revealed last year. In order to house a series of cylindrical tanks used to stow hydrogen, it features a wider centre tunnel than the structure employed by the standard i8.

“The idea is to use the space within the widened centre tunnel to house the battery instead of the hydrogen tanks,” an official privy to the proposal currently in front of BMW’s development boss, Klaus Fröhlich, revealed to Autocar. 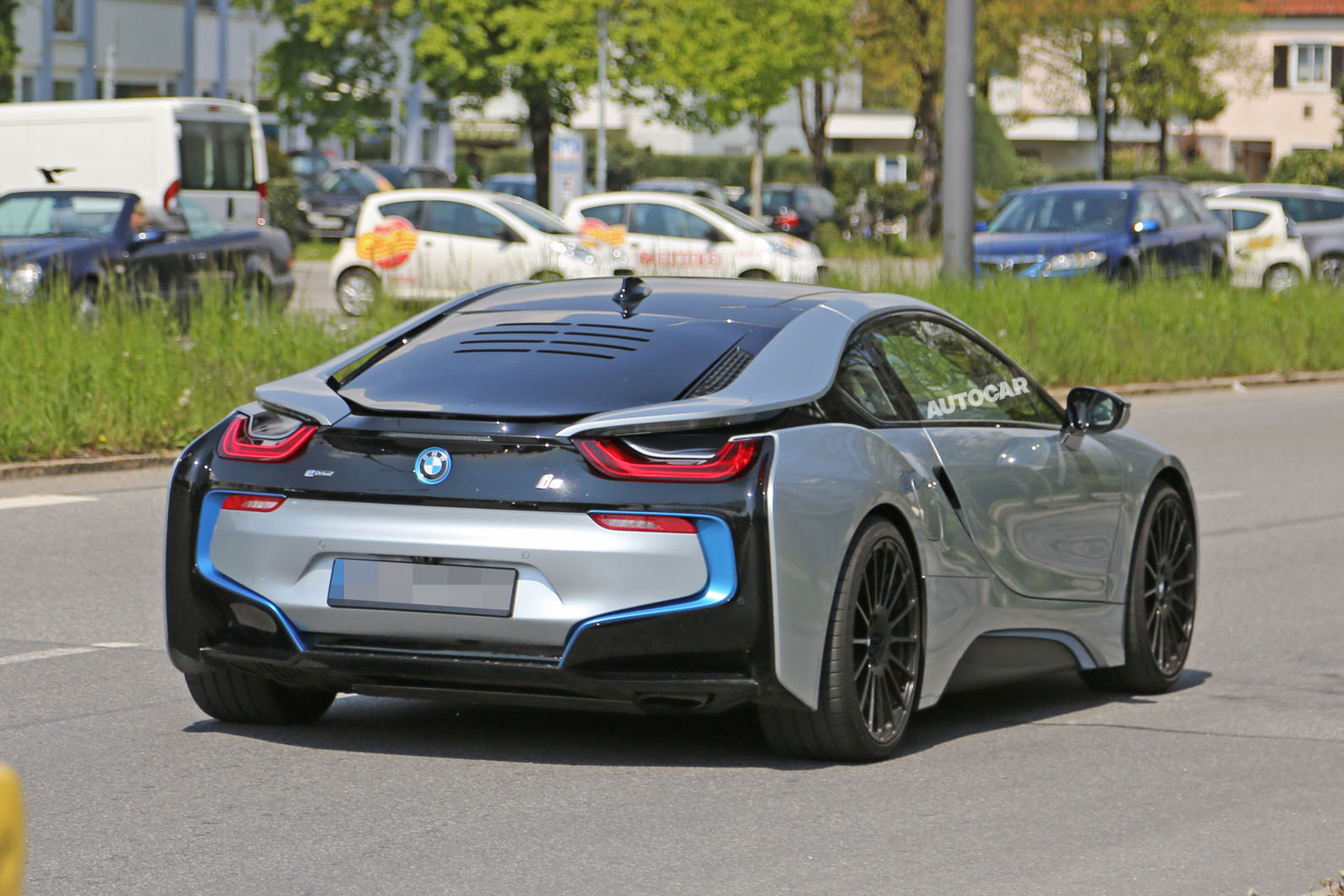 Despite the inclusion of a larger battery, sources suggest the proposed i8 prototype will not weigh more than the production version of the current i8, which tips the scales at 1485kg and possess a range of more than 249 miles.

Power for the new fourwheel-drive i8 prototype will come from three new brushless electric motors. One will be mounted up front and two at the rear in the space usually taken up by the existing i8’s turbocharged 1.5-litre three-cylinder petrol engine. Developed by BMW, the motors are claimed to operate at a much higher internal speed than the production units used by the production i8.

“BMW has a great history of high-revving combustion engines,” said an insider source. “We’re looking to take this tradition into the electric car arena with electric motors that rev far higher than those seen in production today.”

As well as providing greater power, the high-revving nature of the prototype electric motors allows them to be made in a more compact form than those in use today. “Revs are the route to making electric motors smaller,” said BMW. 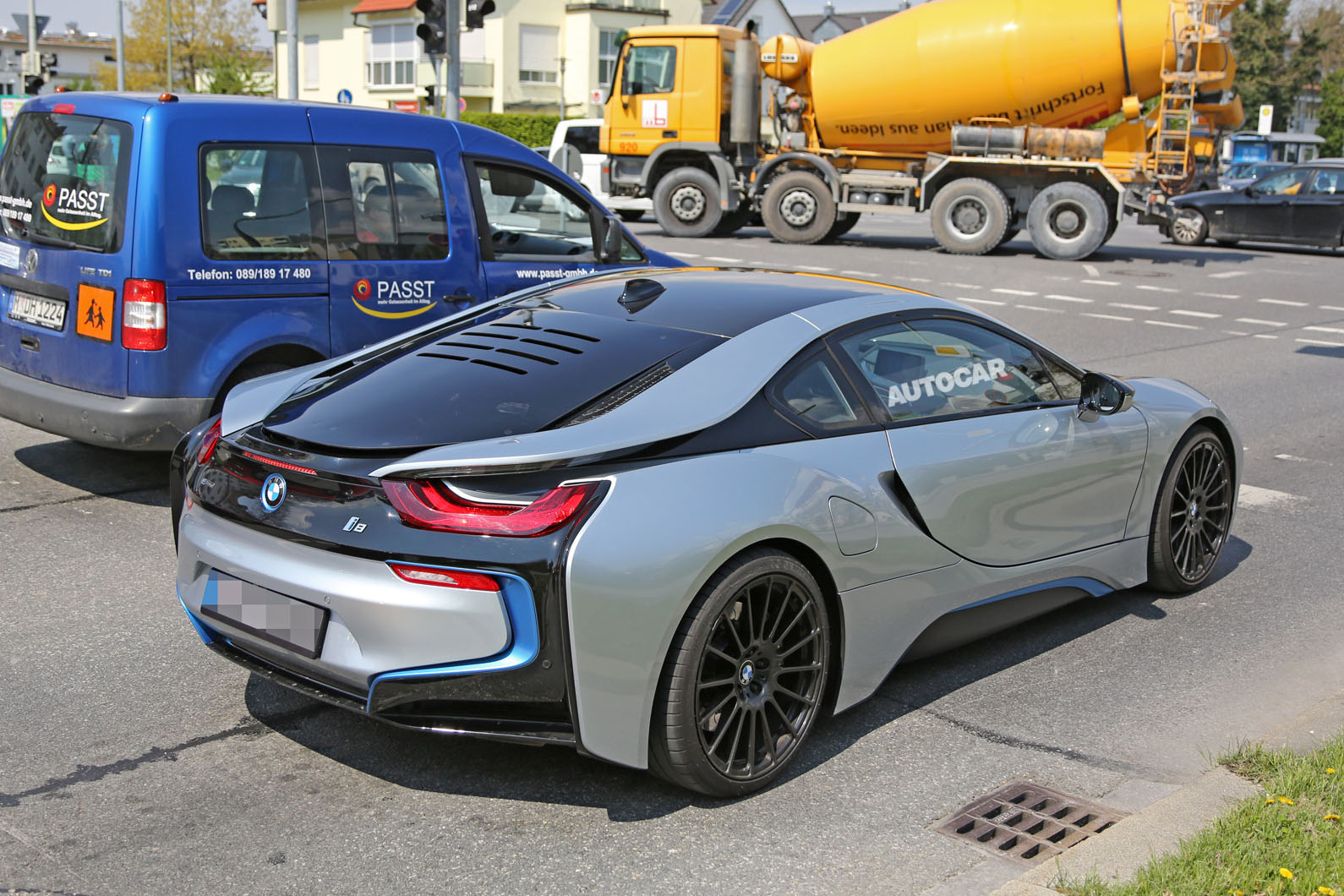 In standard guise, the i8 has an overall system output of 357bhp. BMW remains tightlipped on the proposed output of the all-electric prototype, but insiders say the new motors are capable of delivering up to 268bhp each.

The hydrogen fuel cell prototype, upon which BMW proposes to base the allelectric i8, delivers 242bhp — 115bhp less than the petrol-electric hybrid system used by the production i8.

Before the aforementioned all-electric model arrives, the current hybrid i8 is due a facelift. BMW has already begun testing a more powerful version of today's i8 ahead of this planned facelift's arrival next year.

The heavily modified car, which can be seen in our pictures testing on the streets of Munich in Germany, incorporates many of the developments used by the company’s i8-based Formula E safety car.

These include a modified air extractor unit with an additional Gurney flap along its leading edge for the front-mounted electric motor within the bonnet. The car’s rear has also been reworked, with a carbonfibre-reinforced plastic tailgate incorporating eight individual air vents that replace the glass window used by the standard i8.

The revised tailgate hides two heat-extracting fans, which are fitted to the i8 Formula E safety car. These are intended to improve the cooling efficiency of the rearmounted turbocharged 1.5-litre three-cylinder petrol engine, which is used in combination with two electric motors to provide drive to both axles. 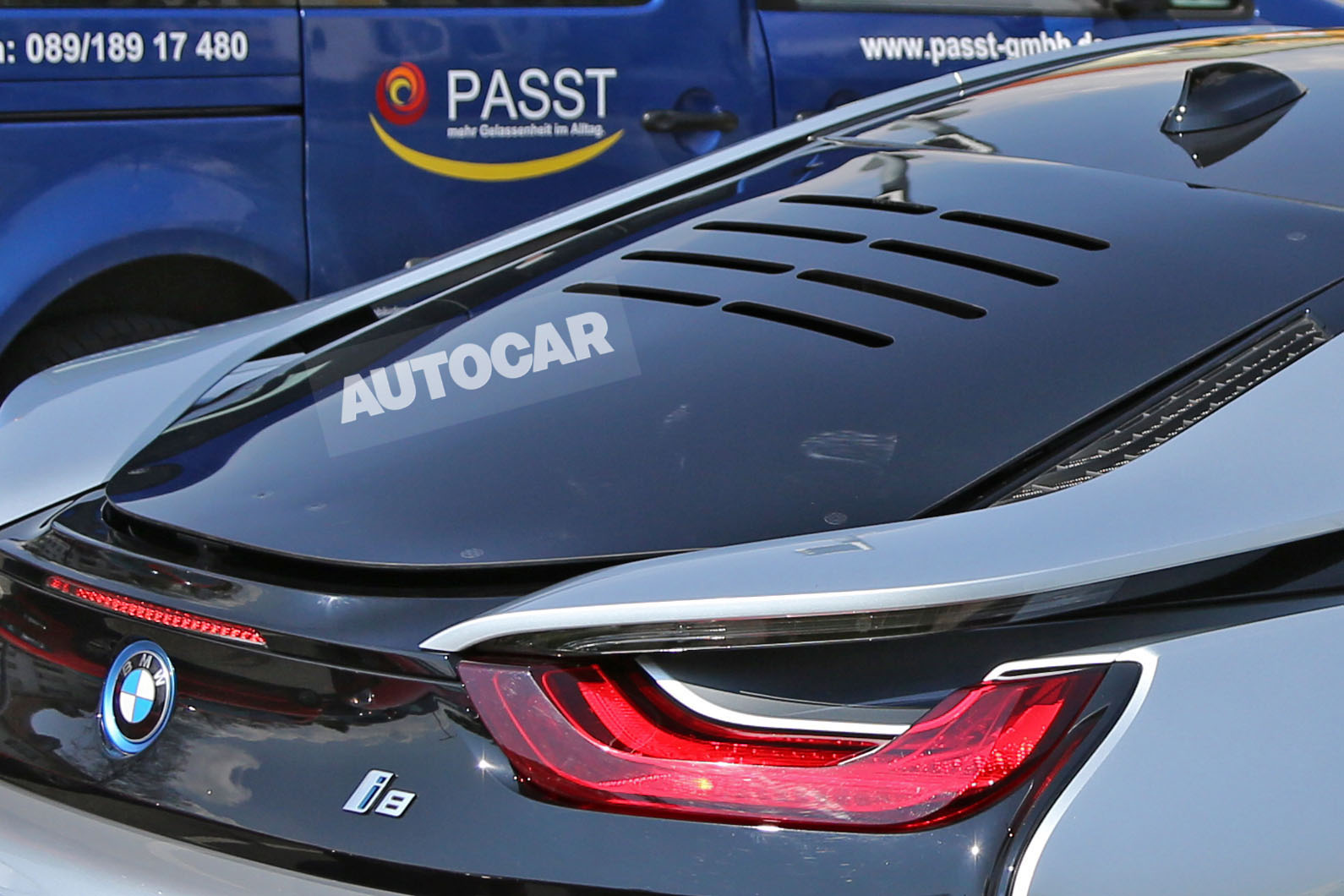 At the heart of the modified i8 is a new lithium ion battery. Borrowed from the X5 xDrive40e, it has a capacity of 26Ah — up from the 20Ah of the standard i8 battery.

Another new feature is an inductive charging system from Qualcomm that operates at 7.2kW instead of the 3.6kW of the existing plug-in system.

BMW is refusing to comment on any performance enhancements for the combustion engine and electric motors, although the added energy density of the battery clearly provides scope for a boost in power for the front-mounted electric motor, which is rated at 129bhp and 184lb ft on the standard i8.

BMW engineers speak of a 10% rise in power, which hints at a combined output of more than 390bhp.

To harness the added performance potential, BMW has reworked the i8’s suspension, lowered the ride height by 10mm and fitted the prototype with 245/35-profile front and 285/30-profile rear tyres on 20in wheels.

what does high-revving engine have to do with Efficiency??
it is a Tradition of missunderstanding and stupidity.
once apon a time BMW did understand: the ETA engines!

This was better news

Some very expensive machinery with a LOT of egg on their faces this morning... wake up call for Landrover (or as I saw on a Range Rover a name change to "Game Over" because it was always breaking down!!!

Remember this story from the last year

MARTYB59 and WINNIETHEPOO Remember this story: autocar.co.uk/car-news/motor-shows-ces/new-bmw-i8-spyder-concept-set-ces-debut. Not so funny now are you!
winniethewoo 23 June 2016

MARTYB59 and WINNIETHEPOO Remember this story: autocar.co.uk/car-news/motor-shows-ces/new-bmw-i8-spyder-concept-set-ces-debut. Not so funny now are you!

I thought this was really quite sensible. Its your support of Vauxhall I find unconscionable. Dire company that should have been allowed to go under.