New all-electric four-door can out-accelerate the Tesla Model S and is larger than the Mercedes-Benz S-Class. It looks to be an early sales success, too
Share
Open gallery
Close
Share story

Faraday Future's FF 91 has accrued more than 64,000 orders since the model was revealed two days ago.

The electric car maker's long campaign of previews seems to have paid off, as the car mimics the runaway success of the Tesla Model 3, albeit to a lesser degree - the Tesla accrued nearly 400,000 orders in the weeks following its reveal.

This does not necessarily mean that Faraday Future has secured over $320million (around £260million) in $5000 deposits; Jalopnik received communication from Faraday Future that only priority spots on the waiting list require a deposit, and the site explained that users are able to make more than one non-priority reservation. Faraday Future has not stated how many orders are paid, high-priority ones.

Nevertheless, Faraday Future is only currently accepting orders from the US, Canada and China, so this figure may rise once European and other areas of orders open.

The FF 91, which was revealed earlier this week at the Consumer Electronics Show, is on course to be the quickest accelerating car on sale with a 0-60mph time of 2.39sec, which would beat the current record-holder, the Tesla Model S P100D, by 0.01sec.

The all-electric four-door SUV was revealed last night at a build-up event for the Consumer Electronics Show (CES), with reservations being taken now before production begins in 2018.

The car makes use of a multi-motor set-up to enable real-time torque vectoring to the rear wheels. This technology boosts traction and allows for rear-wheel steering. So far, the only output revealed for the drivetrain is peak power, at 1050bhp.

The FF 91 is powered by a 130kWh battery and uses Faraday Future's patented FF Echelon Inverter, which it says can transform more energy while using less space. The car can gain 500 miles worth of charge per hour and comes with a home charger that can fill the battery to 50% in less than 4.5 hours at 240V. Faraday Future says it predicts the car will offer a range of more than 435 miles on New European Driving Cycle (NEDC) tests.

The FF 91 is 5250mm long and 2283mm wide - 4mm longer and 383mm wider than a Mercedes-Benz S-Class - and 1589mm tall, which is 9mm shorter than a BMW X1. It features four automatically opening passenger doors that use sensors to prevent them from hitting surrounding obstacles. 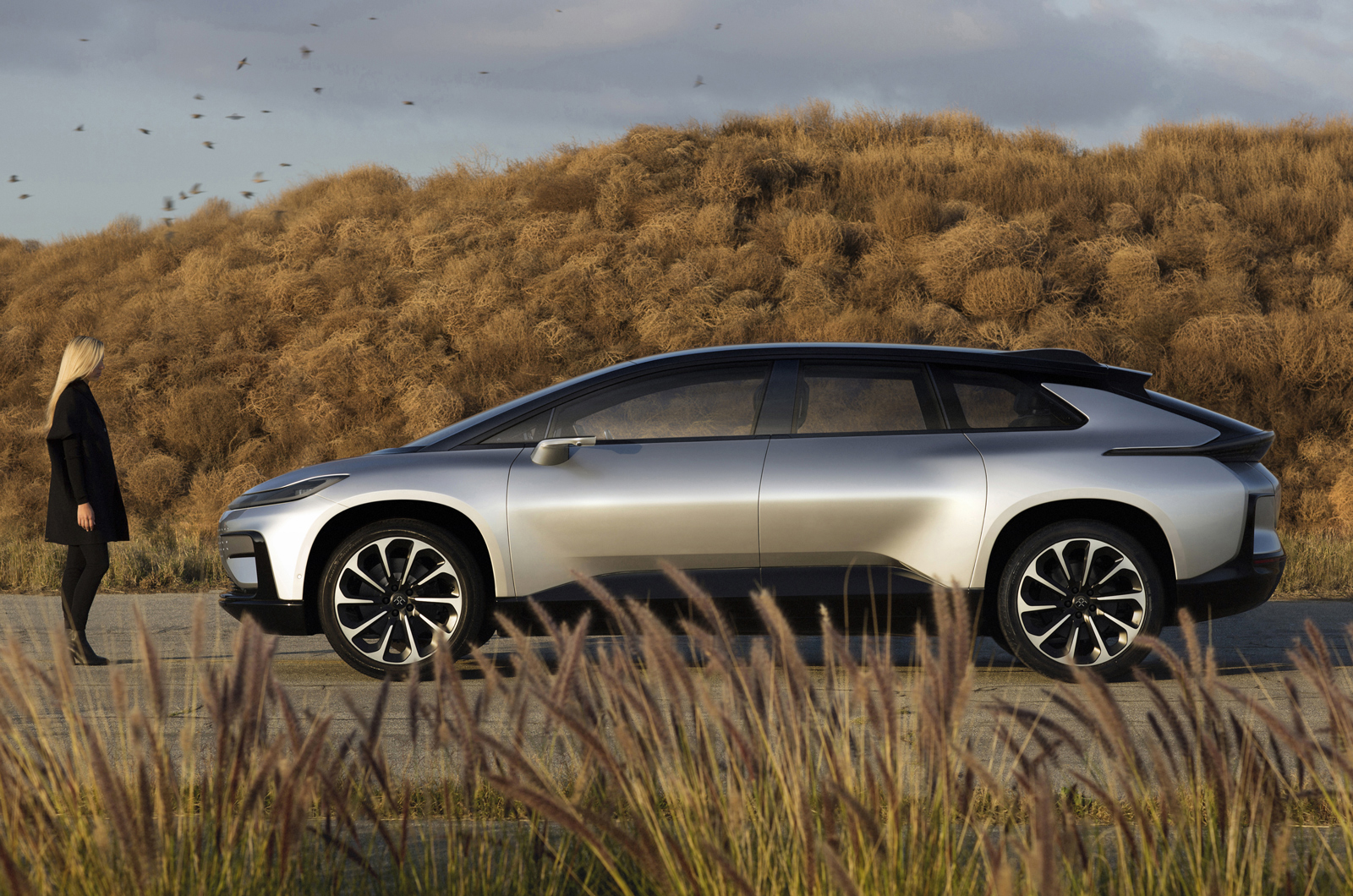 The car’s exterior design has been driven by aerodynamics, with drag reducing elements and stabilising features incorporated into the body. Included is a long list of technical features such as 13 long and short-range radars, 12 ultrasonic sensors, 10 high definition cameras and one 3D retractable Lidar laser sensor – marking the first time this technology will be available on a production car.

Combined, this technical system enables the car to drive autonomously and also park itself without a passenger onboard in a Driverless Valet mode. This mode also allows the car to be summoned upon the owner’s return to the car park.

Inside, the FF 91 benefits from connected technology provided by Chinese firm LeEco, which is Faraday Future’s biggest backer, that seamlessly integrates users' smartphones and digital lives into the car’s online systems. The system also uses artificial intelligence (AI) to learn and improve itself according to its owner’s preferences. Additionally, the FF 91 gets a digital display instead of a rear-view mirror, and its rear, side and roof windows use PDLC (Polymer Dispersed Liquid Crystal) technology that tints to reduce penetrating sunlight when they are tapped.

The car also has rear seats that offer lower leg, lumbar, and upper back adjustments and support, as well as massage, heating, and cooling ventilation functions.

No pricing has been released but online reports suggest the FF 91 will be priced from $180,000 (about £147,000) when it goes on sale. Reservations cost $5000 (about £4075). Faraday Future said the first 300 customers would be invited to upgrade to a limited run Alliance Edition model.

This unveiling comes weeks after backer LeEco entered financial difficulty. Faraday Future also has ongoing issues with its Nevada production plant, which is yet to be completed, relating to late payments to the construction company. However, in late December, Faraday Future said it was close to securing  ¥10 billion Chinese yuan (about £1.17 billion) of investment.

4 January 2017
Good luck parking something 6 inches short of the width of a London Bus, in any Supermarket or multi story car park I've ever used.

Google is paying 97$ per hour

5 January 2017
Google is paying 97$ per hour! Work for few hours and have longer with friends & family! !iw1013t:
On tuesday I got a great new Land Rover Range Rover from having earned $8752 this last four weeks.. Its the most-financialy rewarding I've had.. It sounds unbelievable but you wont forgive yourself if you don’t check it
!iw1013t:=======www.wagenet10.COM

'Car obesity' goes against the trend...

4 January 2017
of more flexibility, efficiency and speedy transit, IMO. Especially with the growing number of cars on the road. This one must weigh at least 2.5 metric tons. Mind you, that's approx. 30 times more than the single person it will normally carry from A to B. Weird to see EV makers sin against the basic rule "the more a car weighs, the more batteries it needs", making the EV more expensive also.

4 January 2017
Is a 0 to 60mph time of 2.39 sec actually possible? Anything below 3 seconds represents an acceleration of more than 1g, which would normally only be possible with slick tyres, a special high friction road surface or significant downforce. So is this a "tested" figure, or simply a calculation based on the car's power/weight ratio assuming perfect traction?
What FF is effectively saying is that this car is capable of ascending a slope steeper than 45 degrees, something which I also doubt possible.
Come on Autocar, let's see the company justify this claim!

Better than a Tesla

4 January 2017
Throughout automotive history we have seen many one off cars claiming to be the future. It's relatively easy to make a one off prototype. The hard part is making thousands of them. Good luck Faraday Future but I'll believe it when I see it.

I'd love to see it happen

4 January 2017
Doesn't matter that it is huge and over the top, if there is a market for it amongst those who currently buy top end s class, range rovers and those revolting Bentley things. It might help change behaviour and aspirations, create a bit more competition and lead to some trickle down. As others have said though, there is a real air of believe it when I see it, and a long line of similarly ambitious failures to learn from.

Who in their right mind

4 January 2017
Who in their right mind could have guessed ten years ago of an age where full size SUVs, saloons and estates accelerate faster than purpose built sport cars?

4 January 2017
This thing occupies 4 more square feet of road space than the fairly gigantic Chevy diesel pickup I use to tow my horse box. On the other hand the truck takes 8.5 seconds to get to 60. Actually 8.49.

4 January 2017
Is this car really 383mm wider than an S-class?!? Not only will it not fit in car park spaces, there are many roads it would not fit in either!
And yet they say the design has been "driven by aerodynamics". That aim would have been a lot easier to achieve if they had made it the width of a normal car (whilst saving weight, improving performance, increasing range, etc. etc.)