The 402bhp electric SUV concept is claimed to have a range of up to 310 miles; production expected to begin in 2019
Open gallery
Close

The Mercedes Generation EQ concept, a 402bhp four-wheel-drive electrically powered SUV concept, has been unveiled at the Paris motor show.

Called the Generation EQ, the high-riding SUV is planned to go into production in 2019 as an electric rival to the likes of the Audi e-tron quattro, Jaguar E-Pace and Tesla Model X, boasting a lithium ion battery that is claimed to provide it with a range of up to 310 miles between recharging. As with AMG, Smart and Maybach, EQ is set to become a sub-brand within the Mercedes-Benz group.

As well as previewing Mercedes-Benz’s first uniquely styled series production electric vehicle, the concept also provides an insight into new electric vehicle platform structure, autonomous driving technology, connectivity solutions and safety features developed for a range of electric vehicles that will be sold under the EQ name – a play on the term IQ and standing for 'Electrical Intelligence'.

Mercedes boss Dieter Zetsche confirmed the model for production, saying: "We'll see this car out on the road within three years from now - at the price range of a reasonably equipped Mercedes-Benz GLC". He also confirmed that the model would spearhead the EQ electric sub-brand created by Mercedes-Benz: "By 2025 we'll have more than 10 fully electric vehicles on the market. We are developing a entirely new vehicle architecture. Our goal is to have electric vehicles make up between 15 and 25 per cent of our global sales by 2025." 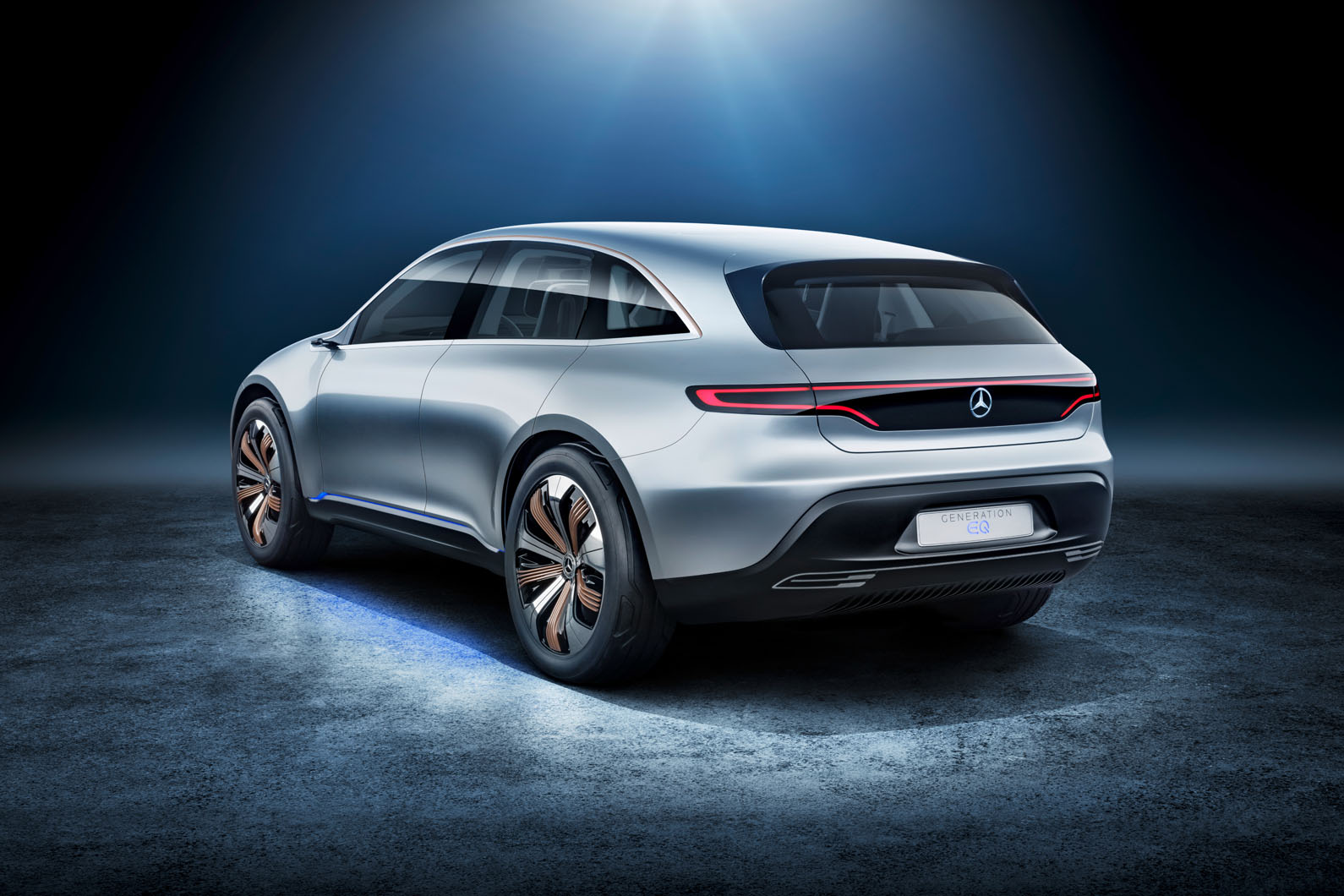 Zetsche said: “The mobility of the future at Mercedes-Benz is supported by four 'pillars': Connected, Autonomous, Shared and Electric. The Generation EQ brings all of these together on a brand new vehicle architecture for battery powered vehicles.”

The new five-door SUV adopts traditional proportions with a pronounced bonnet line and tall glasshouse that runs back to an angled tailgate. There are certain similarities to the GLC Coupé in the overall silhouette and dimensions, but unique exterior detailing, including an illuminated panel incorporating the headlights and three-pointed star emblem and a similar treatment housing the tail-lights at the rear, ensures the Generation EQ stands out from Mercedes' more conventional offerings.

A further departure is the surfacing, which eschews the tautly drawn treatment evident on existing Mercedes-Benz models for a fuller form without any hint of feature lines. The clean new look, which Mercedes-Benz design boss Gorden Wagener describes as "a new electro-aesthetic", is set to become a defining stylistic element of the company’s new electric vehicles.

To help boost the aerodynamic efficiency of the new SUV, Mercedes-Benz designers have resorted to a number of familiar air-cheating measures, including the concealment of the wipers underneath the trailing edge of the bonnet, the employment of digital cameras in place of conventional exterior mirrors, the deletion of traditional door handles in favour of a remote opening function and the fitment of 21in wheels featuring an aerodynamically optimised spoke design.

The basis for the Generation EQ concept is a newly developed platform that Zetsche says Mercedes-Benz will use to develop a complete range of zero-emission vehicles over the next decade. “We’re ready for the start of an electric vehicle offensive with models that will cover every segment, from the compact class to the luxury class,” he said. The platform is constructed from a combination of hot-formed high-strength steel, aluminium and carbonfibre reinforced plastic and has been engineered to suit a number of different vehicle types, including SUVs, saloons, coupés, cabriolets and what are described as 'further models'. 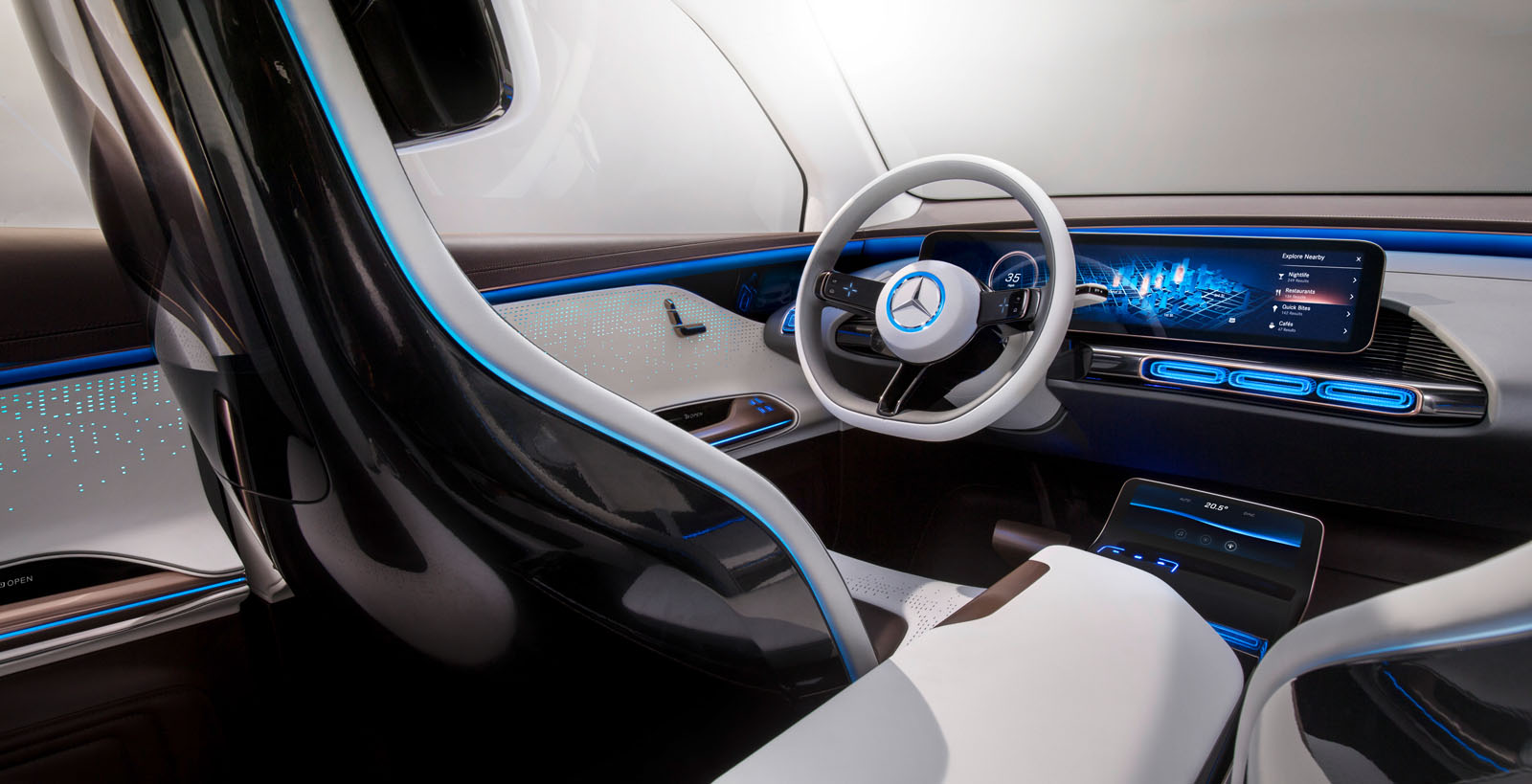 As with the German car maker’s existing structures, the new electric vehicle platform is scalable, allowing it support what Mercedes-Benz says are “a wide variety of wheelbase and track measurements as well as electric motors and battery combinations”. Taking advantage of the inherent packaging advantages offered by contemporary electric drivelines, the Generation EQ’s lithium ion battery is mounted low down wholly within the floor of the new structure, providing it with an ultra-low centre of gravity by contemporary road car standards.

Power for the new SUV comes from two brushless electric motors, with one mounted within the front axle and another housed within the rear axle. The layout is said to provide a clear preview of that planned for the upcoming production version of the Generation EQ, which will also receive a four-wheel drive system boasting fully variable apportioning of power, both between the two axles and between each of the individual rear wheels, through a further-developed version of the torque-vectoring function first seen on the SLS Electric Drive.

Mercedes-Benz is not being specific about the exact power and torque ratings of the Generation EQ. However, Zetsche confirmed that the electric motors previewed by the new concept have been developed to deliver a combined maximum of up to 402bhp and peak torque of 516lb ft – figures he says would allow the new SUV to deliver a 0-62mph time of less than five seconds.

The battery, developed by Mercedes-Benz’s sister company Deutsche Accumotive, uses a modular cell structure that allows it to be scaled to suit the model in which it is used. In the Generation EQ, it receives a capacity described as being “over 70kWh”, which is sufficient to provide the concept with a claimed range of up to 310 miles. To put this in perspective, the battery used by the similarly sized Tesla Model X P90D boasts a capacity of 90kWh for a claimed range of 292 miles.

The battery of the new electric vehicle concept has been developed to support a range of different charging methods, including standard household, wallbox and inductive. No claims have been made about the charging times for each, although Zetsche is backing moves for a so-called Combined Charging System that will allow charging at 300kW in the mid-to-long term, suggesting that five minutes of recharging would provide enough energy for an additional 62 miles of range. 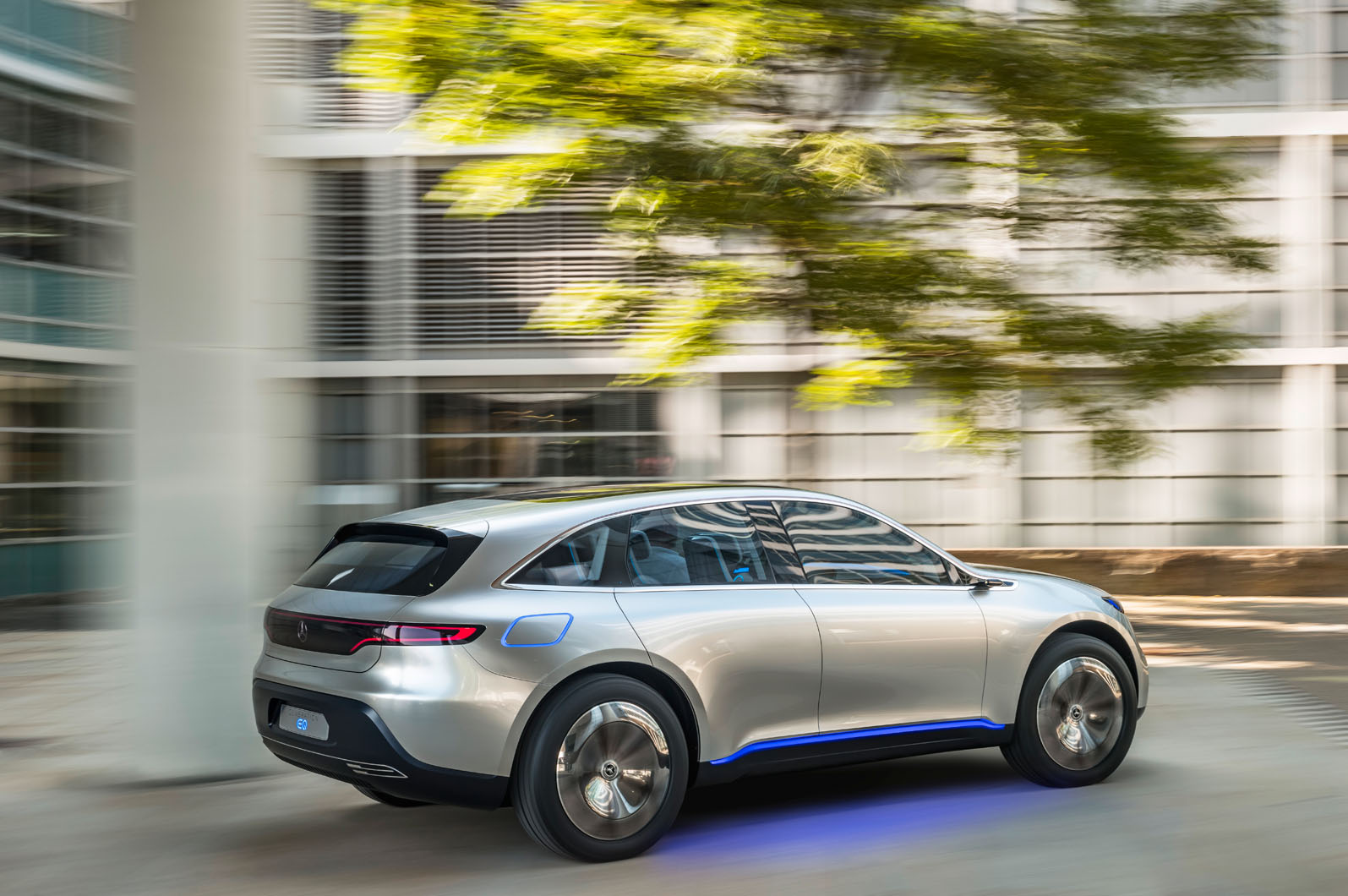 Inside, the Generation EQ receives an all-new interior design developed specifically for Mercedes-Benz’s upcoming EV line-up. Encapsulating the same reduced electro-aesthetic used for the exterior, it features a low-set dashboard featuring a 24in high-definition monitor with unique graphic. This combines with a multi- function steering wheel with touchpads within the spokes and OLED displays as well as a centre console featuring touch-based controls for ancillary features such as the air conditioning. Without traditional exterior mirrors, Mercedes has provided the concept with displays within the door lining that are used to project rear-view images in real time.

A band of LEDs run from the head of the dashboard down the sides and also feature within the air vents. This adds a contemporary air to the interior, which goes without a traditional centre tunnel in a move that frees up space for extra storage space between the seats. The concept car boasts accommodation for up to four on individual seats front and rear, although Mercedes-Benz officials indicate the production version of the Generation EQ is planned to come with a three-across rear bench with space for five.

Included is a prototype navigation system supplied by HERE – the former Nokia-owned digital mapping company jointly purchased by Audi, BMW and Mercedes-Benz in 2015. It is able to precisely calculate the position and radii of corners and roundabouts, allowing the new concept car to automatically adapt its speed and chassis settings accordingly in what is billed as a further step towards autonomous driving. Also on board is the newest in Car-to-X technology that is able to communicate with the infrastructure and other road users in order to provide the basis for a range of different safety features.

Zero emissions ? How, its got

Zero emissions ? How, its got no fuel cell. I think you mean ultra low emissions Greg.