BACK TO ALL NEWS
Currently reading: 2019 BMW Z4: revived roadster faster than an M2 around the Nurburgring
UP NEXT
2023 Lamborghini PHEV supercar: Aventador successor spotted

2019 BMW Z4: revived roadster faster than an M2 around the Nurburgring

The new BMW Z4 is 3sec faster than the BMW M2 around the Nordschleife, according to Z4 product manager Andreas Ederer.

Despite not being a fully fledged M model, the top-of-the range Z4 M40i has beaten the M2’s time at the Nürburgring Nordschleife during testing with a lap time below 8min, he said. “The benchmark target during development was the driving dynamics of the BMW M240i. But the car got so good that the benchmark is now M2.”

The entry-level sDrive20i, which will make up half of overall sales volume, uses a 2.0-litre turbocharged petrol with 197bhp and achieves 0-62mph in 6.6sec. The mid-range sDrive30i uses the same engine in a higher state of tune (258bhp) and hits the benchmark sprint in 5.4sec.

The new Z4 is longer, wider and taller than its predecessor, with its width “most notable,” said Ederer. “The wider track goes out by 9cm at the front and 5cm at back. It gives it more stability in corner and makes car look more grown-up.”

The decision to go for a soft-top rather than hard-top was “made in the first six months of development”. Ederer said the decision creates an extra 100 litres of boot space (now 281 litres) over its predecessor, a lower centre of gravity and a better NVH (noise, vibration and harshness) suppression.

The move also gives it a key differentiator with the upcoming, hard-top Toyota Supra, with which the Z4 has been jointly developed.

An M Sport differential and Adaptive M suspension come as standard on the M40i and are optional on the 20i and 30i. Ederer said: “The sport differential allows you to steer with the rear rather than on the throttle. It’s one of the most exciting things it can do. We always wanted to keep it rear-wheel drive.”

Three trims will be offered in the UK: Sport, M Sport and M Performance, although M Performance will be available on the M40i only. 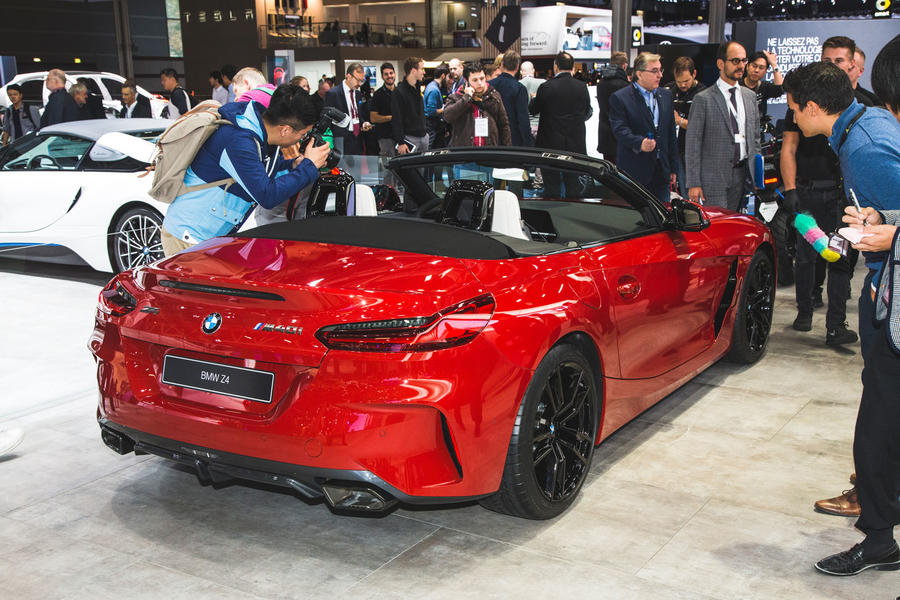 When BMW revealed its new, third-generation Z4 last month, it highlighted the car's renewed focus on driving dynamics to take on the Porsche 718 Boxster.

The new roadster, which has been developed in conjunction with Toyota’s upcoming Supra, made its public debut in the US at the Pebble Beach Concours d’Elegance in Monterey, California.

The 718 Boxster rival has been designed and engineered from the ground up in a move aimed at re-igniting buyer interest in roadsters in the face of dwindling sales over recent years.

As well as having a completely new look with more distinctive proportions, the new Z4 adopts an electrically operated fabric hood. The new structure is claimed to weigh 60kg less than the folding hard-top arrangement of the second-generation Z4, while providing the basis for a lower centre of gravity and what BMW officials describe as “more sporting driving attributes”.

The new Z4, known internally under the codename G29, also uses a brand new platform, which will be shared with next year’s Supra in a joint engineering programme between BMW and Toyota. The design of the steel-and-aluminium structure is described as unique, although it adopts chassis, suspension and electrical components from BMW’s cluster architecture (CLAR) platform, as used by the latest 7 and 5 Series as well as the new BMW X3, BMW X4 and BMW X5 SUVs and the upcoming seventh-generation 3 Series.

The Z4 will be built by Magna Steyr at its assembly plant in Graz, Austria, alongside the Supra.

With a brief to deliver more dynamic driving qualities than its predecessor, the new Z4’s platform incorporates extra-wide sill elements that are said to contribute to a more than 30% increase in torsional rigidity over the structure used by its predecessor. When Autocar had an early drive of a prototype back in May, BMW described the new Z4 as the stiffest open-top car the manufacturer has yet built, claiming it to be stiffer than even BMW the fixed-roof M4 coupé. Despite increased dimensions, including a significant 70mm increase in width, the Z4 is also said to be around 50kg lighter than its predecessor, suggesting the M40i will weigh less than 1500kg. Its 3.0-litre engine is the same as that offered in a number of existing BMWs. With 335bhp and 332lb ft in the limited-volume M40i M Performance model, it propels the Z4 from 0-62mph in 4.6sec and on to a limited top speed of 155mph. Official fuel consumption and CO2 emissions are 39.7mpg and 162g/km respectively.

Opinion: Can the BMW Z4 do show and go?

The range-topping Z4’s peak power is 3bhp shy of the 338bhp developed by the naturally aspirated 3.2-litre inline six in the old Z4 M Roadster, a performance version of the original Z4 produced from 2006-2008. But while it can’t quite claim to be the most powerful Z4 yet, the M40i M Performance’s 332lb ft peak torque output beats the Z4 M Roadster's by 63lb ft.

By way of comparison, the 718 Boxster S uses a turbocharged 2.5-litre horizontally opposed four-cylinder unit with 345bhp and 310lb ft. 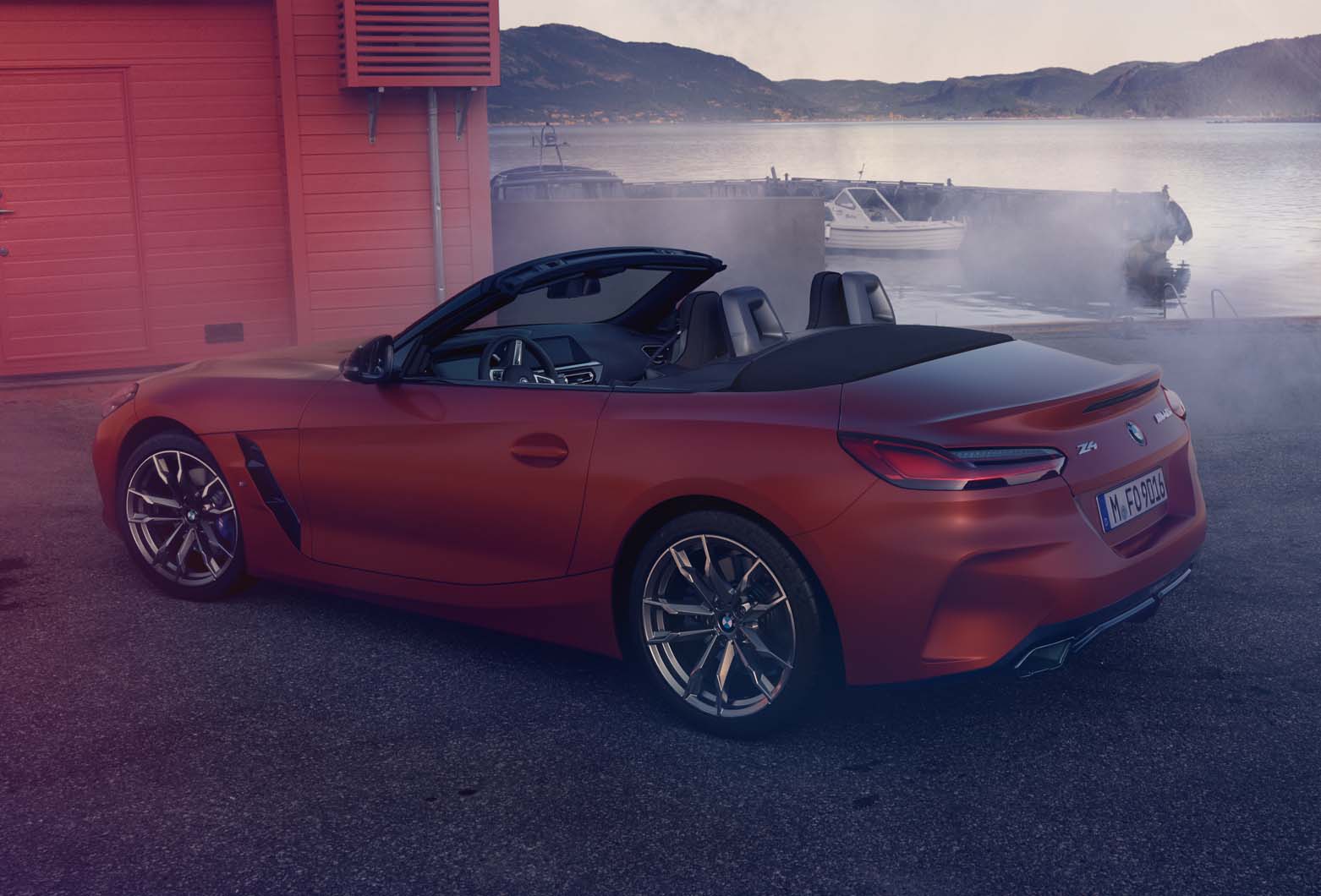 Early rumours suggesting the Z4 could be given the option of four-wheel drive on certain variants have been denied by BMW officials, with confirmation that it will be sold exclusively in rear-wheel-drive form.

In a move that would take it into direct competition with the likes of the Jaguar F-Type 3.0, BMW is also said to be developing a Z4 M variant. This is set to feature the same turbocharged 3.0-litre in-line six-cylinder engine launched in the new M2 Competition, with around 405bhp and the same 332lb ft as the Z4 M40i M Performance. The outgoing Z4 was never offered with an M-tuned variant, backing BMW’s claims that the new car is a more sporting model.

With its engine mounted well back in the engine bay, the new Z4 is said to have a 50:50 weight distribution front to rear. In initial M40i M Performance First Edition guise, its suspension, which uses a combination of double wishbones up front and a five-link arrangement at the rear, features multi-mode electronically controlled dampers. An M Sport braking system is also standard on the launch model, as are 19in alloy wheels.

The interior of the Z4 features a new driver-focused dashboard with technology taken from BMW’s latest saloon models. A digital instrument display and a touchscreen for the infotainment system have also been added, along with newly developed seats and a unique set of controls housed within a broad centre console. Among a long list of options are a head-up display and a Harman Kardon sound system, both of which are fitted as standard to the M40i M Performance First Edition. 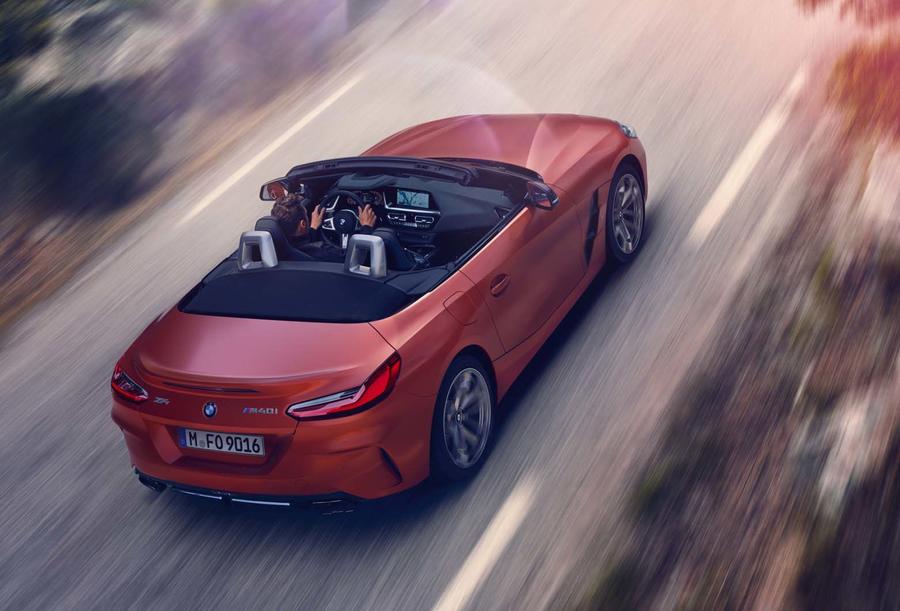 "The guy who has retired and treats himself; an early to mid-30s male with good earnings who wants to show off a bit; and the business woman in her mid-30s to 40s."

Why are there no hybrids?

"There hasn’t really been a discussion. From the beginning, it was clear we were not going to do a 48V or 4WD for example. Maybe because we wanted to keep a little bit of heritage, the purest form. Those technologies are also expensive. As a company, we want to earn money. We want to produce products that our customers want to buy and will pay for. If we had 48V, we would have asked for a much higher price. In this difficult segment, we don’t think it would be the way to go. So these ideas were excluded in the beginning."

Will the M40i be enough for Z4 M seekers?

"I think so. Not so much the figures but the feel. A group of BMW product managers tried it at Escari track near Malaga. They got out and said we should call this a pure M. The need for an M is not really there."

Did you consider other names for the Z4?

"It started development named as the Z4. Then we read about ‘Z5’ in the media, and we discussed it. But even numbers are reserved for more emotional progressive concepts so Z4 makes sense."

How closely have you worked with Toyota?

"We developed the car for Toyota. The two cars share a platform. Obviously, we come across elements where we say, ‘can we use the same part here and there?’. How far can we go in order to find synergies? One will see some of the same parts on both. But we’ve never compared designs of the two." 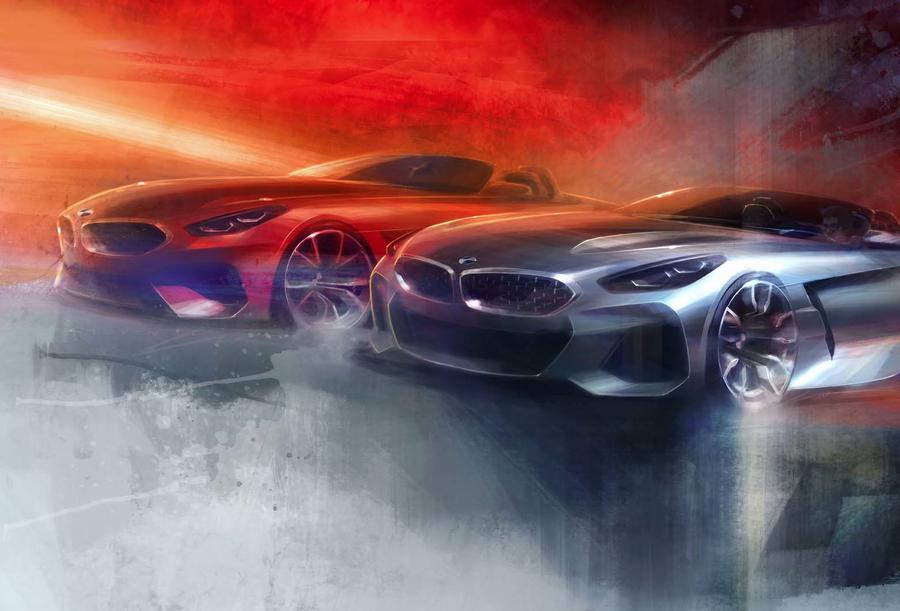 After a selection of shots of the Z4 were leaked online via Instagram, BMW released some official sketches ahead of the car's official Pebble Beach reveal.

The sketches showed the car's design in full, albeit exaggerated, and confirmed the authenticity of leaked shots from earlier in the month. BMW also confirmed the existence of a special First Edition car, which is is due to arrive ahead of the regular production Z4 in March 2019.

Those leaked shots, from an unknown source, quickly spread over the web after their publishing, showing the Audi TT rival's exterior and interior design. They showed that the production roadster takes close inspiration from the original concept, with an exterior featuring a raft of technology inspired by BMW's latest models.

The car in the leaked images was badged M40i, the range-topping Z4 model. A shot of the engine bay confirmed it will use a turbocharged 3.0-litre six-cylinder unit shared with the M240i, expected to produce about 350bhp.

In June, a series of patent images revealed the car's styling, showing the car's swept-back headlights, flat rear lights and wide kidney grilles, akin to the 2017 Z4 concept. BMW had previously confirmed the Z4 would be revealed at Pebble Beach in August, before its specifications were announced at the Paris motor show in September. 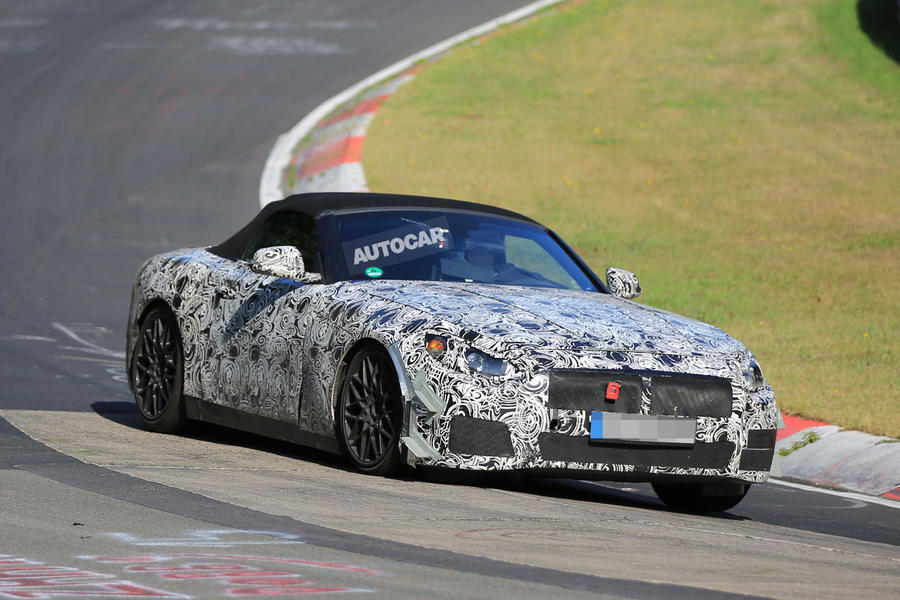 Prior to its reveal, the BMW Z4 had been spotted testing for more than a year. BMW announced the future Z4's arrival back in 2015 and revealed the concept version to preview its design last year.

While the Z4 will be a convertible, Toyota's new car will be a spiritual successor to the original Supra and as such will wear a hard top, as shown by spotted development cars.

Inspiration for the new Supra's design has been taken from the striking FT-1 concept, first seen at the Detroit motor show in 2014.

Its not really a looker, is it?

Maybe just me, but the styling looks very heavy for a 'sportscar'.   Looks more like it should be a Mercedes SL.   Supra for me, ta...

OK it's not front wheel drive but the wide, but short and wedgy styling reminds me of the Lotus more than anything else. I'm really pleased BMW and Toyota teamed up to build two semi affordable sports cars (when compared to 911s, F Types and Vantages).
A88A 17 August 2018

I thought the Bangle design was bad...

imho that’s going to date very fast, compared to the beautiful lines of a Boxster, it just looks awkward with lines going all over the place. When Porsche put a six back in the Cayman/boxster, that’s where my monies going.