BACK TO ALL NEWS
Currently reading: BMW Z4 prototype 2018: first drive of new roadster
UP NEXT
Renault Scenic returns as radical EV with hydrogen range extender

The previous Z4 prioritised style over thrills, but BMW is intent on putting dynamic ability back on the agenda with this all-new one.
Open gallery
Close

Before we get to the new BMW Z4, let’s talk about the previous Z4. Because there’s something you need to know: BMW knows.

It knows that although the previous 2009-2016 BMW Z4 looked every inch the sort of two-seat roadster you’d expect Munich to produce, when it came to its dynamic capabilities it was a little, well, disappointing.

The Z4 has now been revealed - take a look here

It was a car to enjoy being seen in, rather than to enjoy driving. Which is fine, if that’s your thing. But, as an Autocar reader, that’s probably not your thing.

It’s not really BMW’s thing, either. “We wanted a Z4 with more dynamic capabilities, one that was sporty and precise. A pure roadster, a pure driving machine,” says Florian Dietrich, a BMW driving dynamics expert.

In that sense, the third-generation Z4 doesn’t follow on from the previous one, as much as hark back to the original, which first went on sale in 2003. “The first generation of Z4 was sporty,” says product manager Andreas Ederer. “The second generation was comfortable. This [new one] can do both. The last version was a car to drive on a Sunday afternoon. This is a car you’ll want to drive on Sunday morning and Sunday afternoon.”

The brief, then, was to make the new Z4, particularly in range-topping M40i guise, a driver’s car. A Porsche Boxster rival. Actually, that’s still the brief.

The Z4 is due to go on sale in March next year, so the camouflaged M40i you see here is still a pre-production version, and BMW’s driving dynamics team is still refining it and honing how the various adaptive systems such as the Dynamic Stability Control work together.

But you sense a confidence that they’ve delivered on the brief, and that explains why they’ve invited a handful of journalists to BMW’s Miramas test facility in the south of France to drive the car at a relatively early stage. And, having driven it, the early impressions are that BMW has indeed delivered. 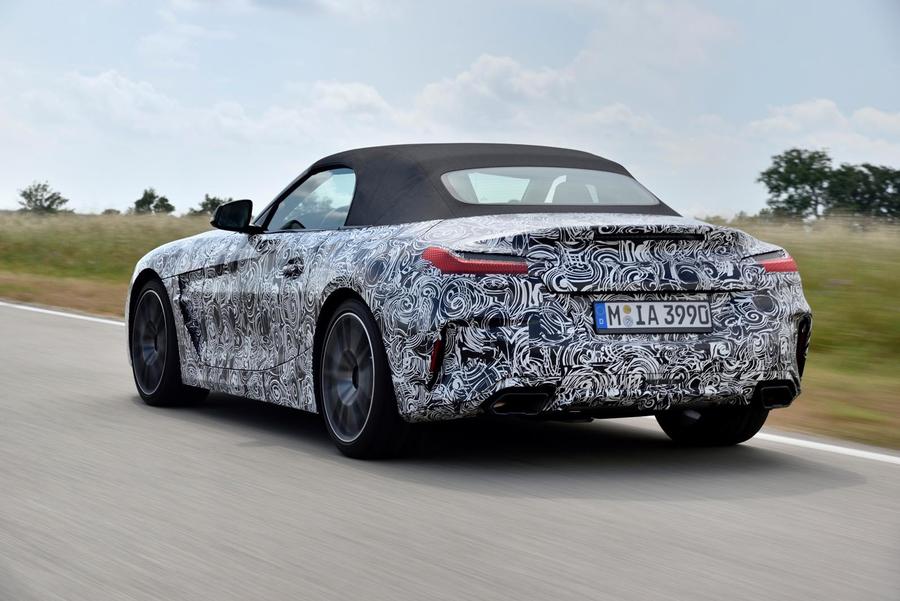 The engineering behind the new BMW Z4

To understand why the new Z4 is so different from its predecessor, consider all the major bits taken from the old one. “The only thing we carried over was the name,” says Dietrich.

The Mk3 Z4 is built on a new architecture, developed by BMW specifically for sports cars and shared with the upcoming Toyota Supra. Elements of the platform will also be used on future models, starting with the next BMW 3 Series.

When they started work, the Z4 development team came up with a series of technical specification requests, and BMW management made Dietrich “very happy” by agreeing to all of them. As a result, the M40i has been developed as a package, starting from the ground up, with the use of the Michelin Pilot Super Sport tyres also fitted to the BMW M3 and BMW M4.

The pre-production cars we drove were fitted with optional 19in wheels, but that’s about the only option M40i buyers will have in terms of dynamics. So there are performance brakes, electronic adaptive dampers, adjustable suspension with MacPherson steel struts at the front and a multi-link set-up at the rear, and a limited-slip differential.

Up front, power comes from the twin-scroll turbocharged 3.0-litre six-cylinder unit also found in the M240i. Here it produces somewhere around 350bhp and 369lb ft, driven to the rear wheels through an eight-speed automatic gearbox.

The M40i is the only version of the Z4 that BMW’s engineers would talk about, but expect models badged ‘20i’ and ‘30i’ as usual – and don’t expect a full M version, or a hybrid.

A key target was to ensure the chassis was as stiff as possible, to offset the inevitable compromise that comes from not having a fixed roof. Dietrich says the torsional rigidity is more than 30% better than the previous Z4, calling it “the stiffest open car we’ve ever made. It’s stiffer than the M4 coupé”.

The team used the M240i as a closed-top reference, and Dietrich says that at every point of the M40i where forces are brought, the car is stiffer than that model – although the absence of a fixed roof means it’s slightly less stiff overall.

The new Z4 is slightly longer than the previous one, although the wheelbase is marginally shorter and it’s around 70mm wider. It’s lighter, too, the extra weight of the latest safety systems offset by reverting from the previous Z4’s folding hardtop to a soft-top, for “a pure roadster interpretation”, as Ederer puts it.

The canvas roof saves 60kg; overall, the car is around 50kg lighter and, crucially for its handling, has a lower centre of gravity. Of course, with a renewed focus on dynamics, BMW doesn’t want to shift too far back the other way, and although the Z4 we drove wore a camouflage livery, a sneak peek at an undisguised version confirmed that it’s a fine-looking roadster indeed, closely following the BMW Z4 Concept previously shown. 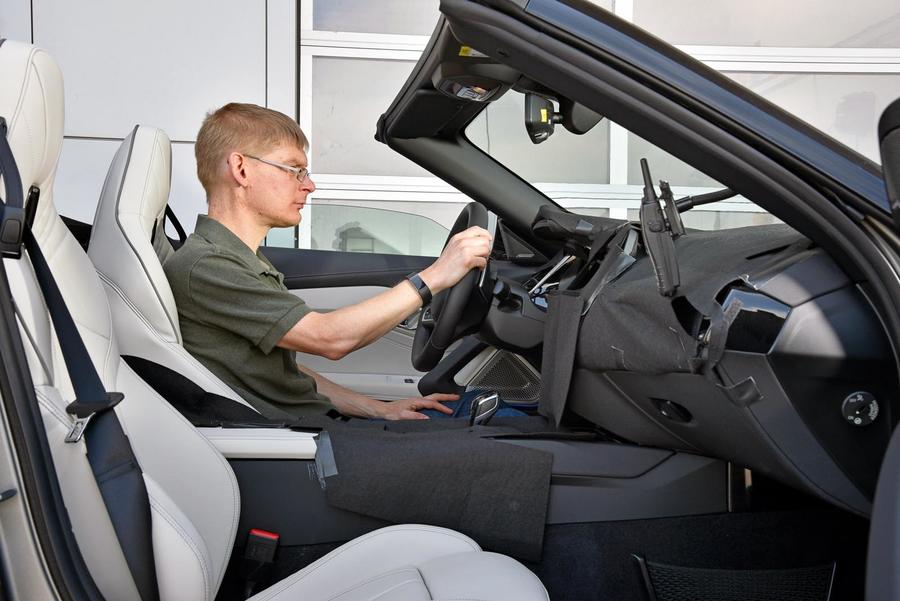 Behind the wheel of the BMW Z4

That was the canvas on which the driving dynamics team had to work. The canvas on which we get to evaluate their progress is the demanding Miramas handling circuit, which features a good mix of corners, bumps and dips, as well as the winding mountain passes and faster roads in the surrounding Provençal countryside.

In late May sunshine, it’s an ideal location in which to drive a cabrio, so it’s telling for the car’s focus that much of the M40i’s dynamic development wasn’t done here but at the Nürburgring, where the weather is rather less conducive to top-down cruising.

The M40i features three main driving modes – Comfort, Sport and Sport Plus – along with a custom option. It’ll cruise happily and benignly in Comfort, soaking up even the bumpiest roads we could find with relative ease and composure. Yet push it harder and the M40i will still offer good response and sharp, precise steering when called upon.

Switch to Sport mode and things step up a gear substantially. The suspension stiffens, without becoming bone-shakingly brutal on bumpy roads, while the steering tightens, the engine becomes more responsive, each gear is held longer and the sound coming from the twin exhausts becomes more sonorous. That makes the driving experience more involved and rewarding, the M40i responding well to being pushed.

Sport Plus is, as you might expect, more focused still. Positive signs, then, especially if there’s more refining to be done.

It’s all about the fundamentals and, in this case, that started with the brief. “Everybody knew we wanted to make a sports car,” says Dietrich, “and BMW management has let us do what’s necessary to make a car like that. It’s an honour to work on cars like this.” 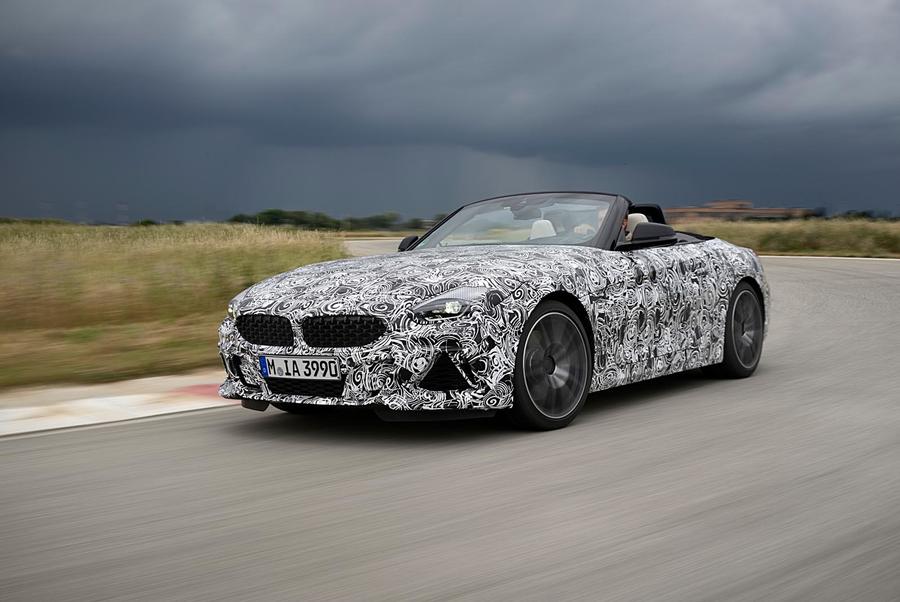 New Toyota Supra will be 'very different' from BMW Z4

The medic alert that sends an alert anytime you cannot respond. Swipe to say you're OK or family will come help you. Be free, but never feel alone. ..<a href="https://rexdl.info/">Rexdl APK</a>