BACK TO ALL NEWS
Currently reading: New Toyota Supra and BMW Z5 gear up for 2018 assault
UP NEXT
New Kia EV9 primed as premium electric range-topper

New Toyota Supra and BMW Z5 gear up for 2018 assault

The all-new Toyota Supra is now in its final phase of development and will form the basis of a newly created Toyota performance sub-brand.

Lightly veiled prototypes of the sleekly styled coupé are now seen frequently on the roads around the vast R&D operation of Toyota’s project partner, BMW, in Munich, Germany.

The new Supra is being developed in a joint engineering venture with the upcoming BMW Z5. It will resurrect one of Toyota’s most highly treasured performance models following a 14-year hiatus for the Supra, which was first introduced to the Japanese car maker’s line-up in 1978.

This upcoming fifth-generation Supra was first previewed by a pair of Toyota FT-1 concepts designed at the company’s Calty Design Research studio in California and unveiled at the 2014 Detroit motor show.

The new Supra is slated to reach UK showrooms during the second half of 2018. It will be offered with the choice of either a traditional petrol engine or a petrol-electric hybrid drivetrain. The hybrid version is claimed to draw on technology and processes developed for Toyota’s most recent TS050 LMP1 Le Mans race car. 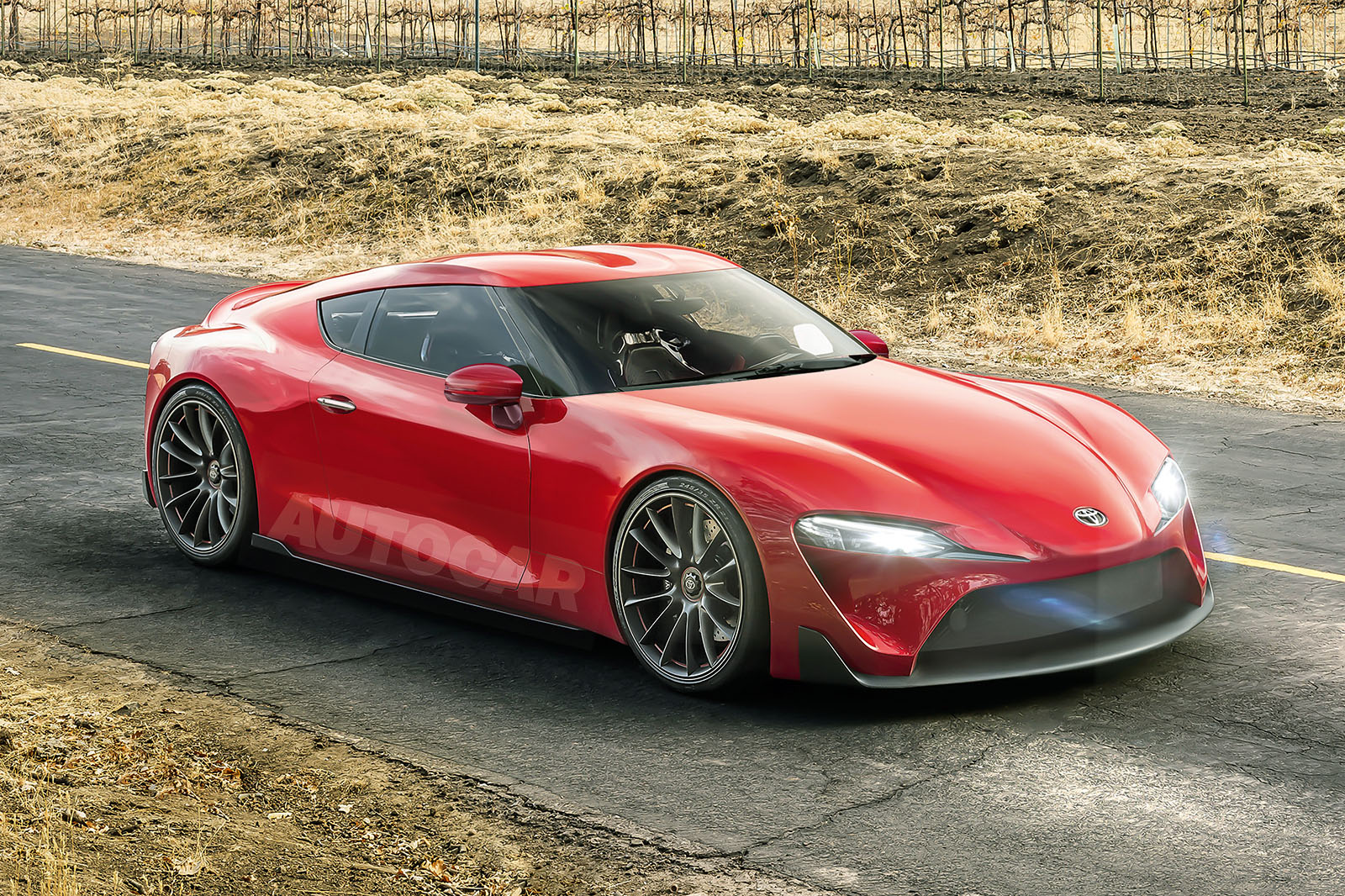 The production version of the Toyota sports car, depicted above in an exclusive Autocar rendering, has been influenced by the exaggerated proportions of the earlier FT-1 concepts. It has a short front overhang and long, sweeping nose section, which houses a longitudinally mounted engine.

As expected, the detailing throughout the new car’s largely aluminium body has been toned down and refined compared with the FT-1, providing the production Supra with a crisper and smoother appearance.

The two-door layout and liftback-style tailgate of the FT-1 are retained. Inside, the new Supra (pictured on track below) provides accommodation for two in the front, with space in the rear taken up by a shallow parcel shelf and a boot similar in size to that of the current Porsche 718 Cayman. 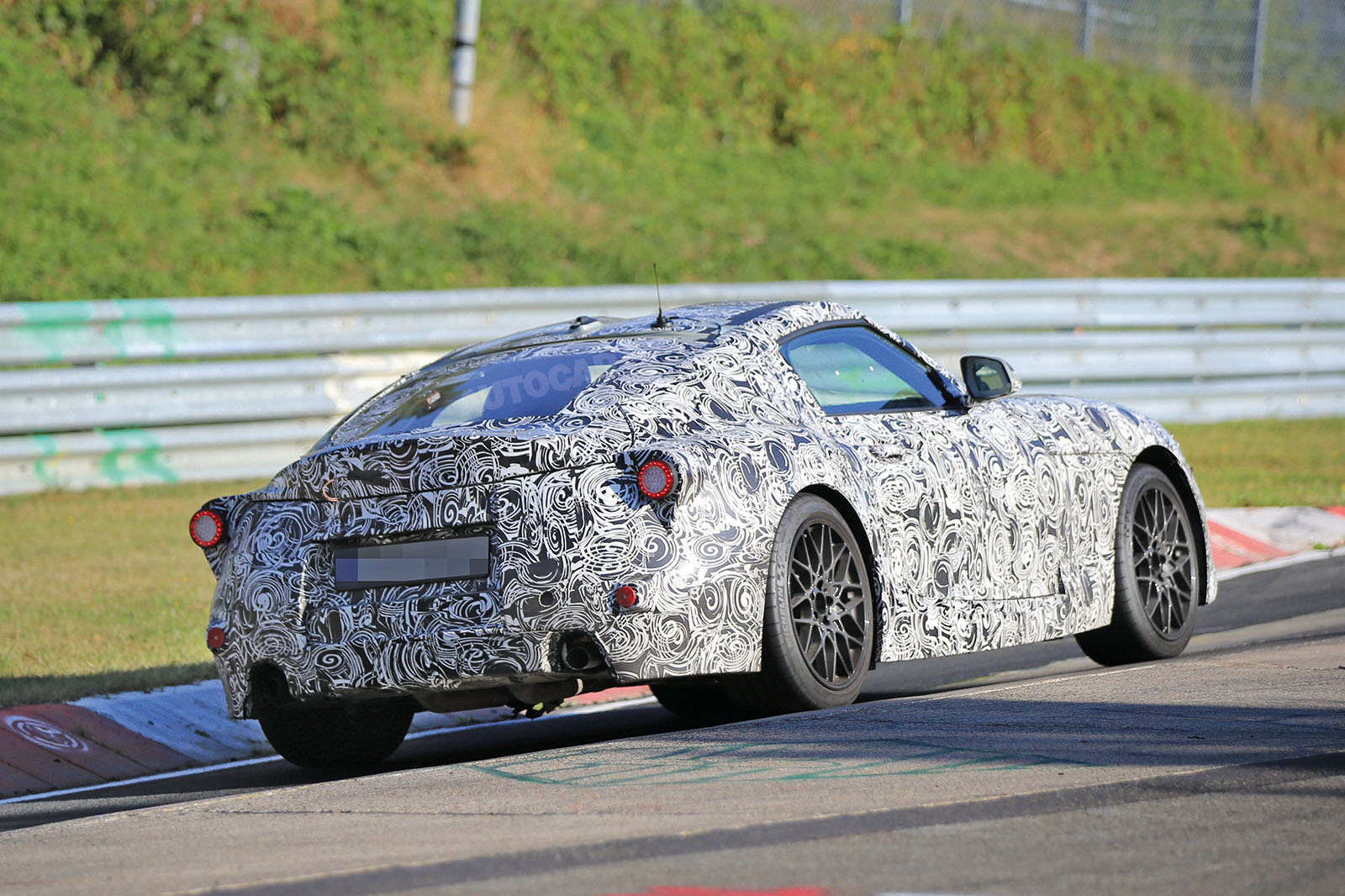 The Supra is planned to be sold exclusively as a fixed-roof coupé, whereas the Z5 is set to take a roadster-only bodystyle and act as a replacement for the recently discontinued BMW Z4. The move is intended to ensure that there will be little or no overlap of sales between the new Toyota and its BMW sibling.

The starting point for the new sports car pairing is a freshly developed platform engineered by BMW. It derives chassis components and engineering solutions from the current 3 Series and its various derivatives, including the rear axle and five-link rear suspension from the BMW M3/BMW M4.

As stipulated from the start of the project, the new platform has been engineered to support both rear-wheel drive and, crucially for plans to provide both variants with petrol-electric hybrid power, four-wheel drive.

Toyota and BMW have also developed a number of lightweight construction processes that will be used within the body structures of the Supra and Z5. Sources suggest the BMW roadster will weigh little more than 1400kg in turbocharged 2.0-litre fourcylinder entry-level guise.

For its part, Toyota has contributed extensive knowhow about hybrid drive systems to the project. Although details remain scarce a little more than 12 months from the planned unveiling of the first of the two sports cars, the Z5, sources insist that each car will feature its own uniquely tuned hybrid drivetrain, with electric boosting for added performance potential.

Despite what one official describes as work culture and language difficulties that are said to have prematurely stalled the joint venture during its infancy in 2013, both Toyota and BMW say their respective models are now progressing according to plan.

The BMW, which goes under the internal codename G29, will be pitched more directly than its predecessor at the Porsche 718 Boxster, according to insiders. To keep weight down, the folding hard-top of the Z4 has been replaced by a lighter and easier to accommodate fabric roof. It's similar in construction to that used by the 2 Series Convertible and supplied by German soft-top specialist Webasto-Edscha Cabrio.

The Toyota’s development is being overseen by Tetsuya Tada, the man responsible for the Toyota GT86 and Subaru BRZ joint venture. The new Supra is intended to add a further dimension in performance to Toyota's line-up, and the likelihood is that it will form the basis of a Toyota Gazoo Racing-run performance arm. 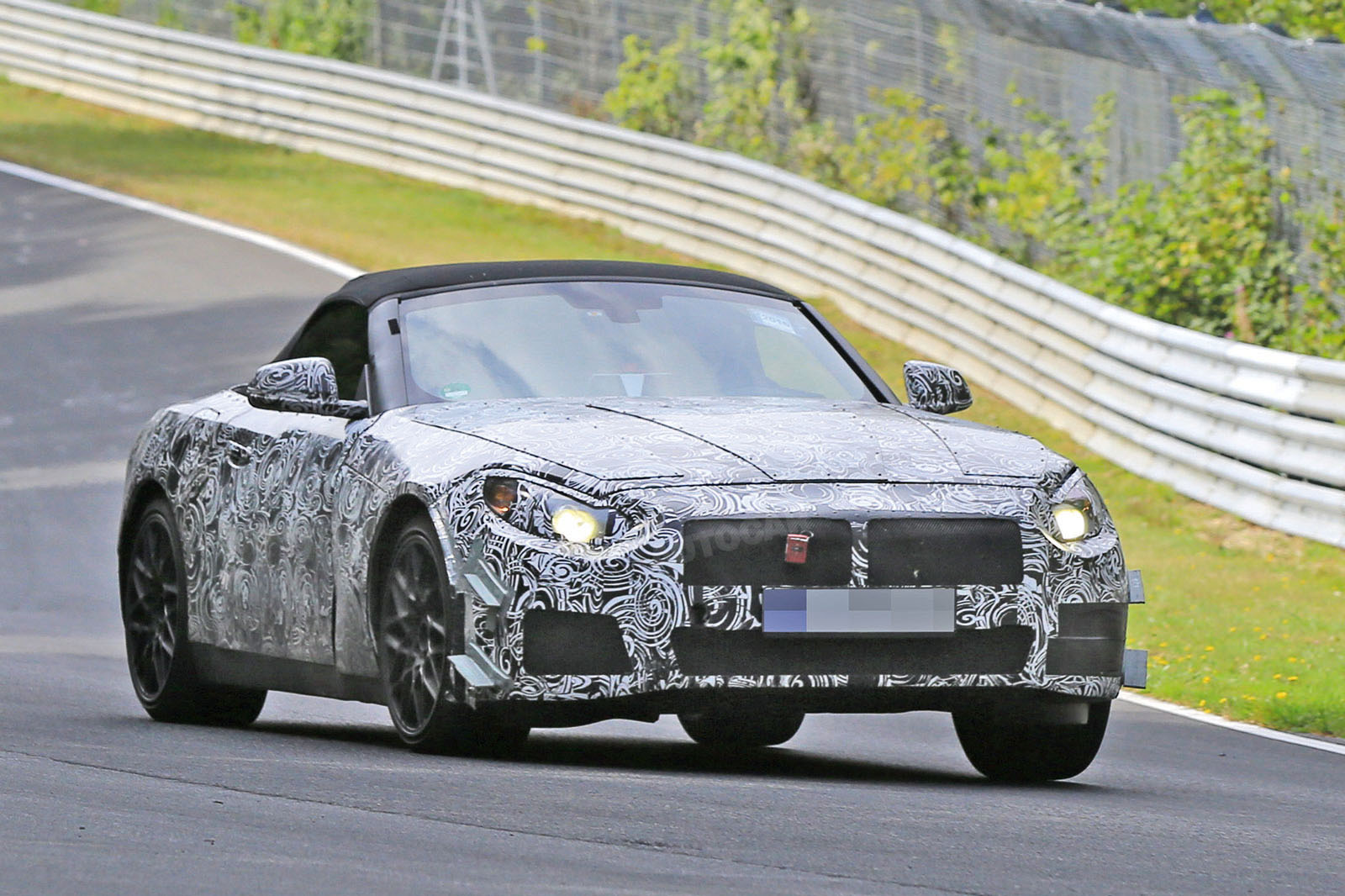 The Z5 (pictured above) will receive BMW’s newest engines. These include the latest evolution of its turbocharged 2.0-litre four-cylinder powerplant, the B48, delivering around 248bhp in the Z5 sDrive30i, and a turbocharged 3.0-litre six-cylinder unit, the B58, in the Z5 M40i M Performance with a similar 335bhp to that of the M240i. Both Z5 models will come with standard rear-wheel drive and an eight-speed ZF automatic gearbox.

Rumours that BMW’s M performance division is already working on a Z5 M flagship model are yet to be officially acknowledged, although the decision to fit the new car with the M3/M4’s rear axle suggests that it could readily accept either the 365bhp turbocharged 3.0-litre six-cylinder powerplant from the M2 or the 425bhp twin-turbo 3.0-litre straight six from the M3/M4 together with a seven-speed dual-clutch automatic gearbox

A diverging strategy will mean that the Supra is offered with Toyota-developed drivetrains. Kicking off the range is a turbocharged 2.0-litre engine in two price-leading rear-drive models. In base form, the four-cylinder unit is expected to offer around 242bhp — the same as the engine used by the IS200 of Toyota luxury brand Lexus. A more highly tuned variant with close to 300bhp is also under development and due to be offered from the outset of sales, according to sources at Toyota’s R&D centre in Nagoya, Japan.

A newly developed twin-turbo 3.5-litre V6 petrol unit, which will be shared with various Lexus models over the longer term, will be the performance flagship of the new line-up. It will deliver more than 400bhp in a rear-wheeldrive version of the Supra. This range-topper will be the most powerful Supra to date and have an expected 0-62mph time of less than 4.0sec and a governed 155mph top speed. 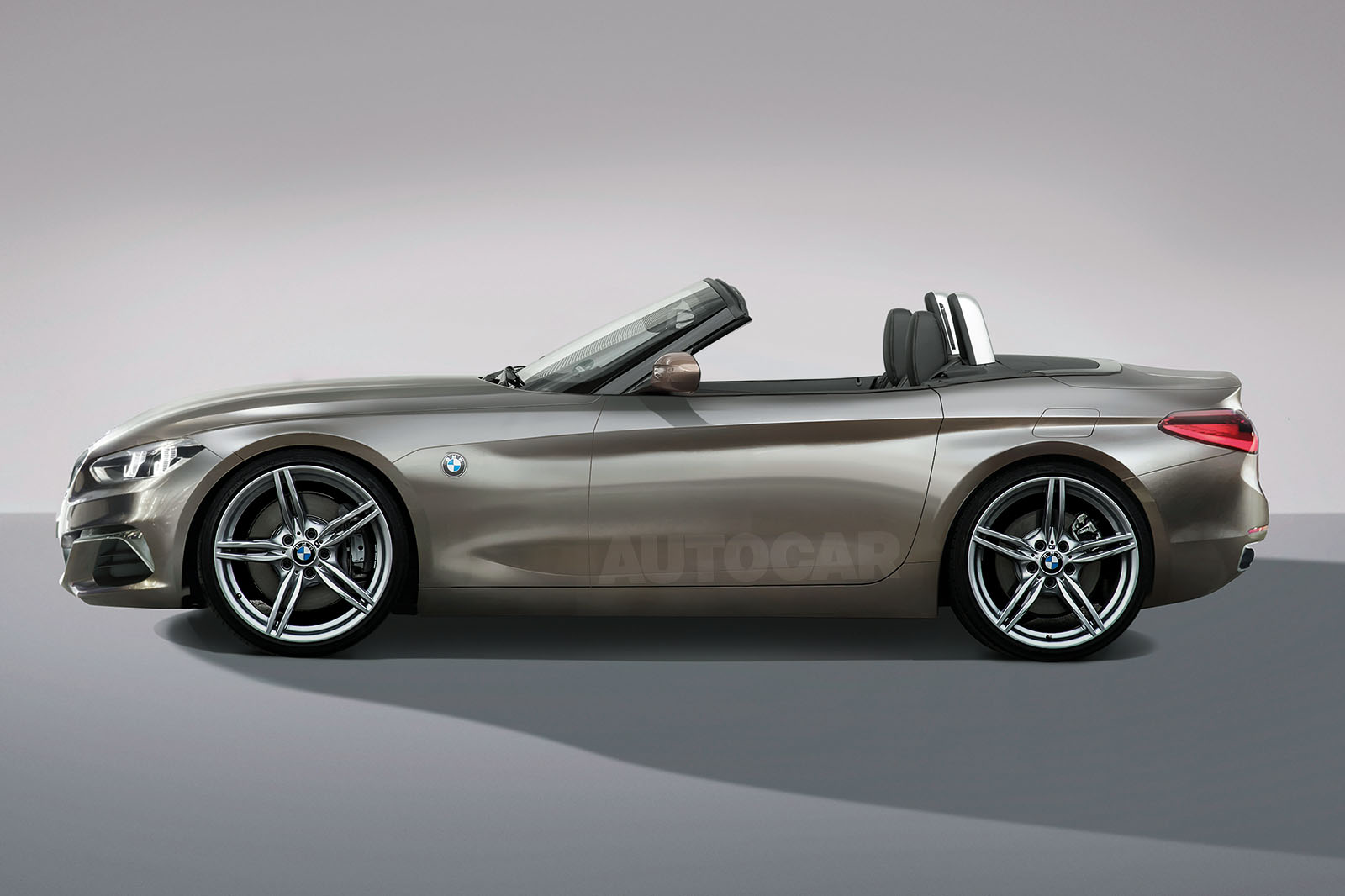 Secrecy surrounds the hybrid system to be used by Toyota. Early signs suggested the Supra would employ a similar system to that showcased by the 420bhp Yaris Hybrid R concept, with a turbocharged 1.6-litre four-cylinder petrol engine and three electric motors — two operating on the front axle and a third, integrated into the gearbox housing, providing drive to the rear wheels. However, this has been denied by Toyota officials in Japan. Instead, the four-wheel-drive hybrid version of the new Supra is expected to have a 3.5-litre V6 petrol engine in combination with an electric motor housed within a ZF-engineered eightspeed automatic gearbox, producing more than 350bhp.

A similar set-up featuring a 3.0-litre straight-six engine could also feature in the Z5.

The new Z5 and Supra will be assembled at automotive production specialist Magna Steyr in Graz, Austria — the same company that was responsible for the assembly of the first-generation Mini Countryman, Paceman and Coupé, and which will soon begin assembly of yet-to-be-disclosed versions of the new BMW 5 Series.

BMW and Toyota are remaining tight-lipped about planned production volumes, although supplier sources involved in the tooling up of the Magna Steyr production line suggest they are banking on a capacity of up to 60,000 units during the first full year of production in 2018.

The sports car project is just one component of a broad-based engineering and technology-sharing collaboration between Toyota and BMW. Other fields include fuel cell systems, lightweight technology and a lithium air battery project aimed at advancing electric car development.

This article is very

This article is very confusing to read. The desire to compare the two cars is good, but the constant switching between is terrible.
poon 24 November 2016

I think these two are going to be another GT86 and BRZ White Elephant.
View all comments (6)