From £43,7709
The M2 Competition replaces the ‘plain’ M2 with the promise of better on-the-limit handling and more muscle. And boy, does it deliver
Open gallery
Close

Here’s how it goes, then. I’m not sure I’d ever seen it written down like this before but I suppose it’s obvious.

BMW M division cars have a clear hierarchy: CS models sit at the top, then Competition models (like this one is), then high-performance models (those badged just M2, M3, whatever) and then M Performance models (such as the M235i).

It’s the first time I’ve seen it presented like that, but, as ever more CS and Competition models arrive, perhaps BMW feels it needs clarifying, given the increasing number and diverse types of M car it would like to sell.

This one, then, is the M2 Competition, which, despite that hierarchy, simply replaces the standard M2, rather than adds to it, as with the M4 and M5. And when BMW announced it, at around £3000 more than the standard car (still sub-£50k), it looked like a rather enticing package.

Basically, it now has the engine from the M3 and M4 in the front of it, so a twin-turbo unit rather than the single-turbo one that has been in the M2 since its launch in 2016. It’s slightly detuned to 404bhp, rather than the 425bhp that it arrives with in the M3 and M4.

The front-mounted inline six-cylinder unit drives through either a six-speed manual or seven-speed dual-clutch automatic transmission (we tried both), to an electronically controlled limited-slip differential at the rear, and to the rear wheels. There’s a new exhaust, too, with electronically controlled flaps, for some additional noise, and a petrol particulate filter.

Elsewhere, the M2 Competition is harder, keener and sharper. It gets a wishbone-shaped engine bay brace, and there's a retuned steering map and some rose joints in the rear suspension. Together with tweaks to spring and (passive-only) damper settings and the stability control system, the whole caboodle is said to “improve response” and enable “more progressive on-the-limit” handling.

There are bigger brakes, too (not carbon-ceramics), which, when the Audi TTS and Porsche 718 Cayman GTS have just arrived, sounds like a useful way of keeping the M2 up with the, er, competition.

Other changes are limited. The design alterations at the front are largely about getting more air to the engine’s cooling system, which is bigger than on the previous M2 on account of the additional 40bhp and 62lb ft (total torque is now 405lb ft). Plus, you can have new wheels, optional new M seats and M-ish mirrors. Woo. 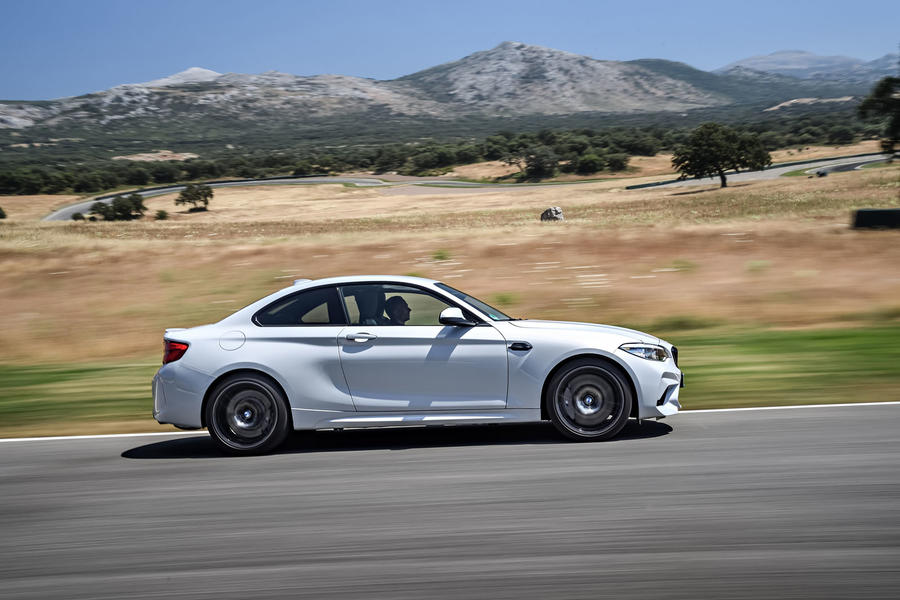 The changes you want to know about are the ones that, really, you can’t see. And they’re mega. I won’t lie and won’t dally. The M2 Competition is terrific.

The M2, when it was launched, was the kind of car whose engine easily outclassed Porsche’s four-pot, but whose handling, while brawny, engaging and enjoyable, didn’t quite have the last word in finesse like the Cayman did.

I mean, strictly talking about finesse, perhaps it still doesn’t. The Cayman has its masses close to its middle, and it rides with elegance, so it retains exceptional control of its body, turns with amazing agility and dances around at its limit with true grace. The M2 Competition doesn’t do that and is both different and hugely engaging as a result.

Remember the ride on the past M2? It was a bit knobbly but rounded and bouncy at the very edges. Now, take away the rounded bits. The ride is firm but so brilliantly controlled that I don’t think – really terrible roads aside – it’s any less comfortable. Body movements are over quickly. But the chassis changes that make the big difference are the ones that up the M2’s response.

With the engine in the front and a kerb weight of 1625kg (an increase of 55kg owing to the new engine and ancillaries), the M2 is still never going to quite have the same agility as the Cayman. But, honestly, it doesn’t matter, in the fact that the steering is more positive around its centre, so builds with authentic feel as you turn, while that strut at the front and the stiffer joints at the back mean there's a massive slug of accuracy and precision where there simply wasn’t before.

It’s great on the road. It’s rewarding at any speed but more so once you ask more of it. The engine zings away with more freedom than the old M2’s, or the Cayman’s, or that of the only other serious small driver’s coupé worth a look: the Toyota GT86/Subaru BRZ. You don’t have to rev it out, mind: that the torque peak arrives at 2350rpm means third gear is good for a windy, empty hillside road, with enough oomph to play around a little with the cornering line.

The dual-clutch transmission is good, but I’d spec the manual gearbox every time. It’s weighty and fairly long on throw, but the smoothness and involvement are good. And involvement is the M2’s new speciality.

On a circuit, you’ll find a mostly even handling balance. There’s a touch of understeer, particularly in higher-speed corners, because the engine’s in the front and there should be a bit of push on any new road car. But if you trail the brakes as you turn, or just lift out of the throttle in higher-speed stuff, the M2 becomes pleasingly neutral. You can lean on it with confidence and adjust the line easily on the gas, knowing it’s playful and reliable in the way that the best rear-drive chassis – and this is among them – are.

The ESC calibration is good. In its standard mode, you can find its limit under acceleration on the right road, and on track in particular (please take an M2 Competition on track at least once if you buy one) it’s better in MDM (M Dynamic Mode), which will even give you as much as a quarter turn of opposite lock before it even thinks about intervening, and when it does, it does to do you a favour.

The M2 now gets presettable M buttons on the steering wheel, one each side, with which you can set your dynamic preferences. With a manual gearbox and because the M2 is passively damped, it’s not as useful a shortcut as on, for instance, the M5, but it could be handy on a track day – a push of one button, say, giving you everything off just for that nice section where they won’t mind so much if you smoke up the tyres. Just a little. 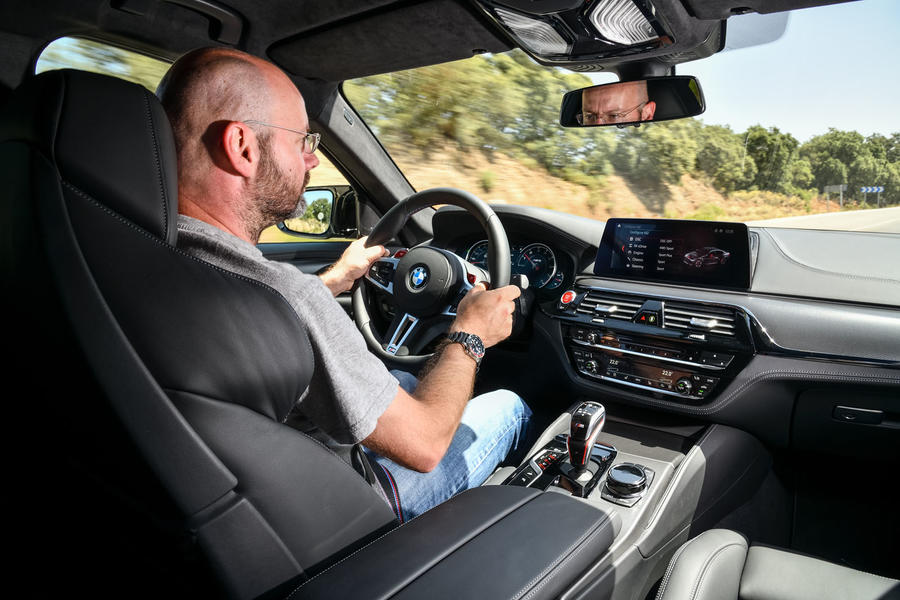 That limit playfulness – the rear differential’s willingness to lock, let you ride out a slide on neutral steer or with everything crossed up – remains the M2’s ultimate party trick. But this time it has more dimensions than that. It has more keenness, incisiveness and engagement all the time. It's a sports car, not a muscly coupé.

When Porsche moved to a four-cylinder engine, I wondered if its rivals would sense a weakness, an opportunity. BMW is the first to really take it. I give you one of the best driver’s cars of the year. 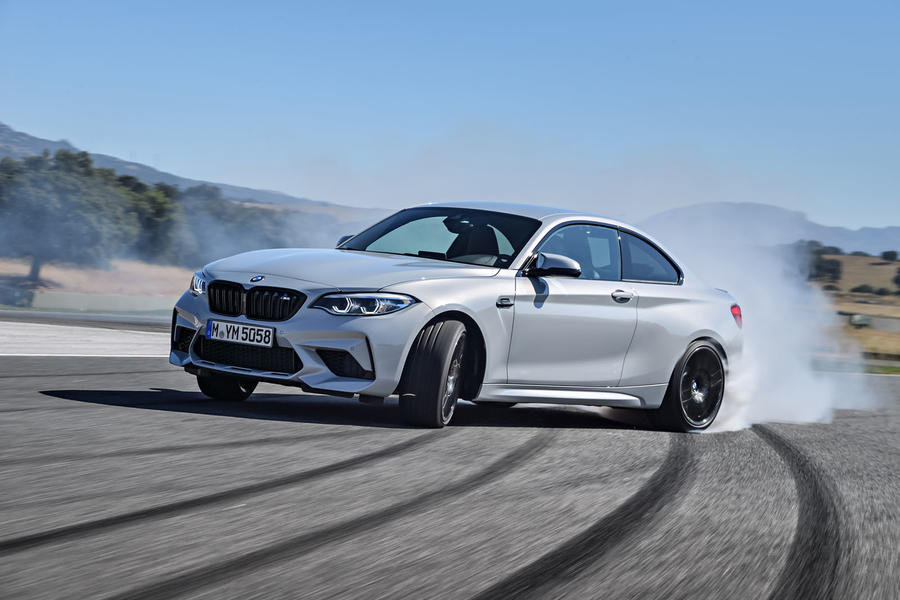 It's too often ignored that BMW's are technically mid engined in that the engine is behind the front axle in the same was as, for instance, a Cayman's engine is ahead of the rear axle. Hence 50/50 weight distribution from a car with the engine in front of the driver.

It's too often ignored that BMW's are technically mid engined in that the engine is behind the front axle in the same was as, for instance, a Cayman's engine is ahead of the rear axle. Hence 50/50 weight distribution from a car with the engine in front of the driver.

That sort of thing used to get reported on, having read reviews of my old 924 that was mentioned as it too was front mid, I also remember it being discussed with MGR 75/ZT V8's as the MG had the engine pushed as close to the bulkhead for better handling balance and the 75 had it pushed further forward for better sound insulation and refinement. As for this M2, as good as it is, I'd still take a 1M over it purely down to styling, as I think the old 1 coupe was a stunning looking car. Comparing it to a cayman or f type is daft, its like comparing an mx5 with a golf gti, different cars that can happen to share similar prices.

Matt ends his piece by writing, "When Porsche moved to a four-cylinder engine, I wondered if its rivals would sense a weakness, an opportunity. BMW is the first to really take it. I give you one of the best driver’s cars of the year". If that's the body blow BMW delivered to Porsche, who's betting against a Porsche TKO with the new Cayman GT4?

Why always the Cayman comparison?

I never quite get the constant comparison with the Porsche Cayman. The only thing they can be compared on is possibly perfrormance and price, but that apart they're not rivals, not even close ones. One is hatchback-derived coupe, the other is a purpose built, focussed sports car. So it's inevitable the Cayman will be much lighter and have a more focussed drive.