From £25,0108
We get behind the wheel of Hyundai's first crack at a hot hatchback, and the i30N doesn't disappoint
Open gallery
Close

The i30N is the first hot hatch from a marque with a full works entry in the World Rally Championship, and therefore something to be taken very seriously indeed. That Hyundai’s aim has been to cram in as much performance for the least possible cost to buyers should also have your ears pricked up.

Why now? Well, the brand is on something of a roll, recording an 87% increase in European sales in the past five years. To build on that success and translate rally podiums into profit, it’s now launching a performance arm – N.

Enter Albert Biermann, long-time boss of BMW’s performance arm – M. He’s the type of man who expects the ‘ESC off’ button in a car to actually mean ‘off’ (in the i30N, it does) and yet recognises that, in 2017, a five-door hot hatch needs to be usable to be a hit in showrooms. This machine is very much his baby and the German’s presence is a major reason for optimism about its ability to entertain.

The fundamental i30N package is nothing out of the ordinary – it’s a five-door hatch with a turbocharged 2.0-litre engine driving the front wheels. What is rather unusual is the level of hardware on offer for modest outlay, with the £24,995 base model getting 247bhp, an electronic limited-slip differential and three-way adaptive suspension. An optional Performance Package sees those figures increase to £27,995 and 271bhp.

As for pace, the standard car hits 62mph from rest in 6.4sec, while the Performance model shaves 0.3sec from that time. Both will hit 155mph and manage around 40mpg combined, says Hyundai.

The five-door bodyshell is the same as that used for the standard Hyundai i30, with Hyundai claiming it to be already adequately stiff (the N gets underbody strut braces, nevertheless). Wider wheel arches have been grafted on and the N car sits up to 8mm lower.

Aggressive bumpers with deep intakes at the front, a red pinstripe on the splitter and a triangular brake light sat within the gloss-black rear spoiler are other identifiers, although perhaps none are as conspicuous as the N’s rather lovely, and unique, signature colour – Performance Blue. There’s also a choice of 18in wheels (shod in Michelin Pilot Super Sport tyres) or 19in options (bespoke Pirelli P Zero).

Components for the car’s upgraded brakes, fettled engine, toughened-up six-speed gearbox, reinforced clutch and sophisticated suspension are all either built in-house or supplied by Korean firms with whom Hyundai has a close relationship. It might have been developed at the Nürburgring, but the i30N’s physical form is refreshingly home-grown, and that’s helped it undercut the competition.

The car is also highly configurable, with settings for the e-differential, engine map, exhaust, suspension, steering and ESC. All in all, there are 1944 combinations, although by default they’re grouped into Eco, Normal, Sport and a hardcore N mode. There’s also an N Custom mode, with which you can deploy your favourite settings at the touch of a button.

Inside, the i30N gets either a 5.0in display atop the dash or an optional 8.0in unit. You get Apple CarPlay and Android Auto, as well as readouts for power, torque, turbo boost pressure, lap times and – sure to go down well with the local constabulary – acceleration. Performance Pack models also get a removable brace that stretches across the boot floor – how about that for intent? 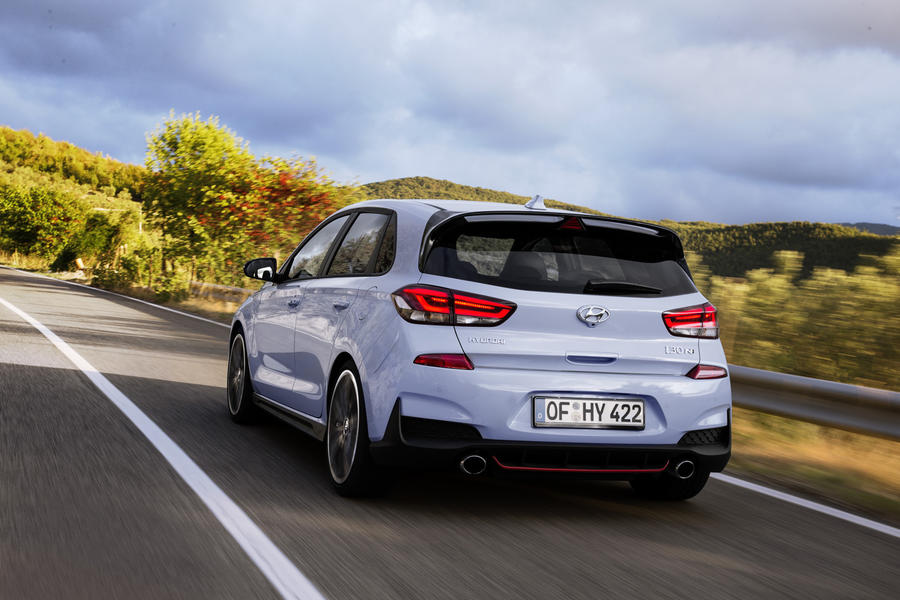 Extremely impressive. Surprisingly so, given that in just 30 months the project has gone from being an entry on the Hyundai board’s wish list to a product you can buy from dealerships complete with five-year warranty.

Perhaps most impressive is that the i30N gets the fundamentals right. The seats are decently low and supportive, and there’s plenty of adjustability in the steering column. That’s a big tick in the box in this segment. In our left-hand-drive test car, the pedals were slightly offset to the right but still well spaced for heel-and-toe shifts (if you’d prefer not to use the admittedly excellent rev-matching function).

Factor in the quick, tactile throw of the gearstick and the short-travel clutch and you’d swear Hyundai had been building this kind of car for generations. The i30N also feels robust to its core, although material quality is a league below what you’d get in a Golf GTI.

On the move, the 2.0-litre engine is supple enough to take a higher gear and carry eye-widening speed through corners by leaning hard on the superbly damped chassis. Alternatively, drop a cog or two and get familiar with the engine’s 6000rpm sweet spot. Either way, throttle response really is refreshingly crisp for a turbocharged unit, and while there’s no great climax to be had as engine speed rises, there’s plenty of character here – particularly with the off-throttle pops and bangs from the exhaust (as is de rigueur) in N mode. The Performance Package car also features an overboost function that delivers 279lb ft for up to eight seconds at a time.

It’s difficult to overstate what a brilliant job Hyundai has done with this car’s chassis. The most severe mode, Sport+, is usable – preferable, even – on most roads, although the Sport setting beneath it quells flares of wheelspin that rougher surfaces precipitate. Normal mode, meanwhile, calms proceedings to the extent that you might forget you’re at the wheel of such a potent hatch. The burly engine and commendably feelsome steering are merely the supporting cast.

Qualms? There aren’t many. The i30N is not a car that’ll suck you into an apex regardless of your entry speed in the style of, say, a Vauxhall Corsa VXR packing a Drexler diff. Neither does it change direction with the brusque conviction of certain French rivals; in fact, it can feel quite nose heavy if you’re even a little bit too ambitious on turn-in. The ABS also seems a tad sensitive, although that could be a consequence of the blistered Italian rat-runs.

First impressions suggest that trackday regulars – whom Hyundai is attempting to woo with the i30N – might also want for a more mobile rear axle. Biermann admits a Renault Sport Mégane is the sharper tool in this regard, but insists the i30N is the more versatile proposition and better device for learning. He’s probably right, too.

As for aesthetics, call them ‘tame’ if you like but Hyundai prefers to use the word ‘timeless’. We’ll give it the benefit of the doubt on this one – there’s a refreshing lack of chintz to the i30N that imbues it with an elegance reminiscent of the Clio 197 and original Focus RS. No bad thing. 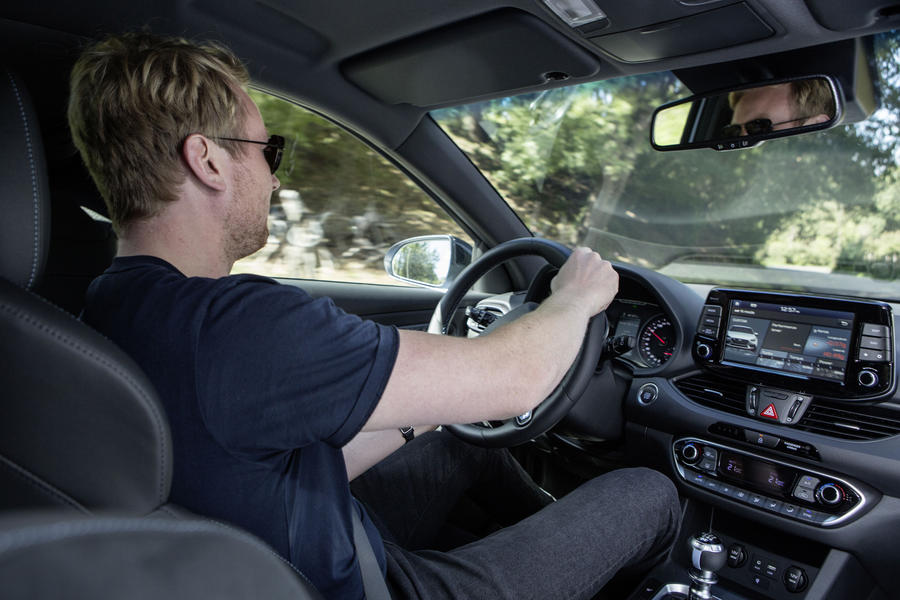 The hot hatch market has never been so competitive, but newcomer Hyundai has two things to help it hit the ground running: top-level motorsport experience and the right personnel. So has that worked out?

On the evidence of this first drive, you’d have to say it has. Hyundai has pulled off some feat in delivering a car that feels so intuitive and enjoyable – not to mention heroically fast when the moment arises – and yet will happily play shopping cart when necessary.

Moreover, at £27,995, even the higher-spec Performance Pack N-car undercuts the likes of the Honda Civic Type R and, remarkably given the kit on offer, the entry-level Golf GTI. That it’s arguably the better all-rounder than either should guarantee it your time and, at the very least, your consideration. 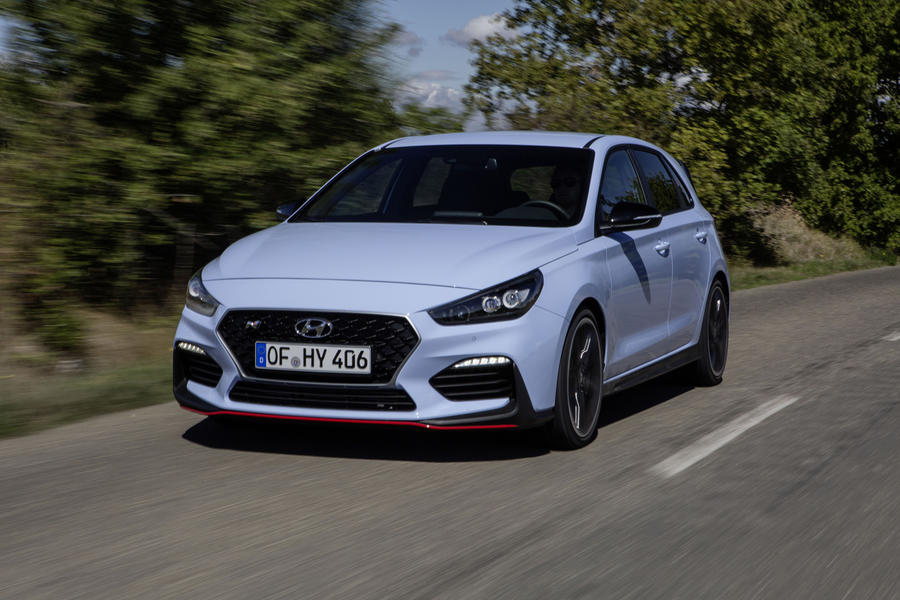 Couple of performance extras along with a price increase just makes the car look even worse value for money. Expect big discounts on new and pre-registered, dealer demos littering forecourts in a year’s time.

Styling is a little staid but quality will be superb and these 'N' cars are only going to get better.

Would be great if they applied the N treatment to the estate. The review reads very well, not really sure why it doesn't get 4 1/2 stars? The five year warranty is particularly appealing.