From £17,4057
The Hyundai i30 Fastback combines good looks with sensible practicalities, but its dynamic charm is what appeals the most
Open gallery
Close

As the name implies, this premise here is quite simple. Hyundai already offers its Hyundai i30 as either a hatchback or an estate, and now there’s a third bodystyle: a fastback.

Compared with the five-door hatch – itself revised for 2017 – the roofline is lowered by roughly an inch and tapers gently at the rear. Along with the elongated nose, complete with lower-set grille, it means the Fastback is 115mm longer than the hatch. The rear haunches are also more pronounced, with wrap-around rear lights, and there are two new wheel designs, of 17in and 18in.

Is all that enough to make duck-tailed i30 Fastback a thing of beauty? Perhaps, albeit in a slightly pokey fashion that leaves one in no doubt about the car’s hatchback origins.

Nevertheless, the big claim from Hyundai is that the Fastback ‘democratises advanced design’, tacitly referencing the swooping likes of Audi’s Audi A5 Sportback and Kia Stinger, which cost rather a lot more. Hyundai also reckons itself to be the first brand to hit up the volume segment with a five-door coupé, conveniently forgetting about the existence of the Mazda 3 Fastback, which we rather like.

You’d be forgiven for thinking the changes go no deeper than the metalwork, but you’d be wrong. The chassis sits 5mm lower than before and the suspension has been stiffened a touch in line with the Fastback’s marginally more sporting bent. In the UK, the engine line-up will be petrol-only at first (and possibly ever), with a 1.0-litre turbo unit touting 118bhp and a similarly blown 1.4-litre engine offering a more wholesome 137bhp. A six-speed manual can be had with either powerplant, though the more powerful of the two is also offered with Hyundai’s seven-speed dual-clutcher.

Equipment is decently generous, with the base-spec SE Nav 1.0 T-GDi featuring an 8in touchscreen with Apple CarPlay and Android Auto. There’s also wireless phone charging and a rear-view camera, though to indulge in the luxury of artificial leather seats you’ll need to upgrade to Premium spec, which adds LED headlights too. Top-of-the-line Premium SE cars get a panoramic sunroof. 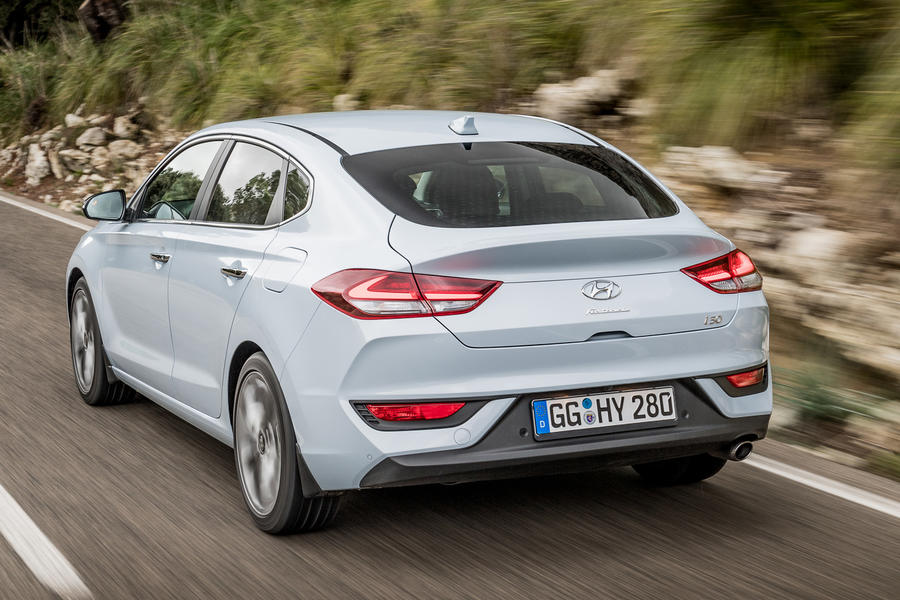 As benign and undemanding to drive as it is to look at, which, frankly, will suit most buyers just fine. When it comes to control weights, Hyundai has found its groove with the most recent Hyundai i30, and there’s a natural rate of response throughout – steering, brakes and throttle – though little in the way of feel.

Hyundai’s alterations to the chassis have yielded a marginally more agile car, too, though the handling itself could only ever be described as being ‘inert’. Again, that’s almost certainly deliberate, as the i30 is a purveyor of stability and refinement over any kind of thrills. A Mazda 3 is more the enjoyable steer, undoubtedly.

As an aside, we were surprised to see that our test car was shod with Michelin Pilot Sport 4 tyres, which were so effective as to neuter any playfulness the chassis might have possessed, even if they did serve up tremendous grip.

The engine we tested was the more powerful, 1.4-litre petrol unit. It makes for a reasonably refined cruiser and 179lb ft from a lowly 1500rpm means the car’s performance – though modest – is at least accessible. Its 51.4mpg combined economy figure is a fraction lower than the automatic’s 52.3mpg, though both figures are respectable, and on a par with the marginally less powerful 1.4-litre TSI found in the Volkswagen Golf.

The interior, meanwhile, surprises in that boot space is said to be at least 450 litres (the exact dimensions have still to be confirmed), surpassing the hatchback’s 395 litres. Rear headroom also seems to have suffered to a minimal degree. 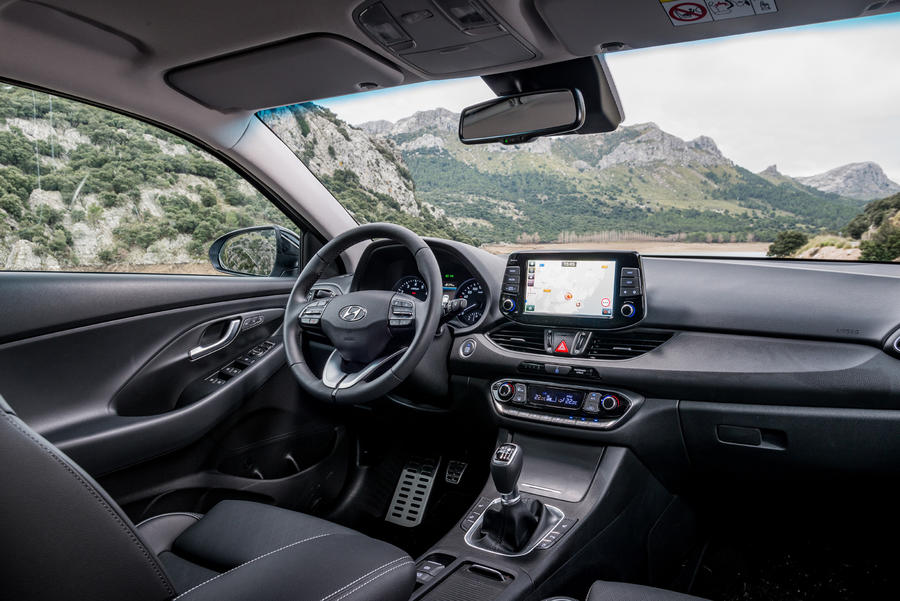 You might well consider it a tempting buy. After all, the Fastback represents a dynamic improvement over the Hyundai i30 hatchback and, objectively speaking, that car gives very little cause for complaint, in terms of practicality or drivability or build quality, but especially in terms of cost. Hyundai has been canny in levying only a £500 premium on the new car, which seems good value.

This makes the i30 Fastback an intriguing proposition. Its niche is undeniably narrow and pinning down its reason for being is, well, difficult. We imagine the majority of drivers in the market for something a little exotic won’t be queuing around the block for a Hyundai, and yet many a hatchback buyer may crave something a little different. The i30 Fastback is just that, and no worse for it. 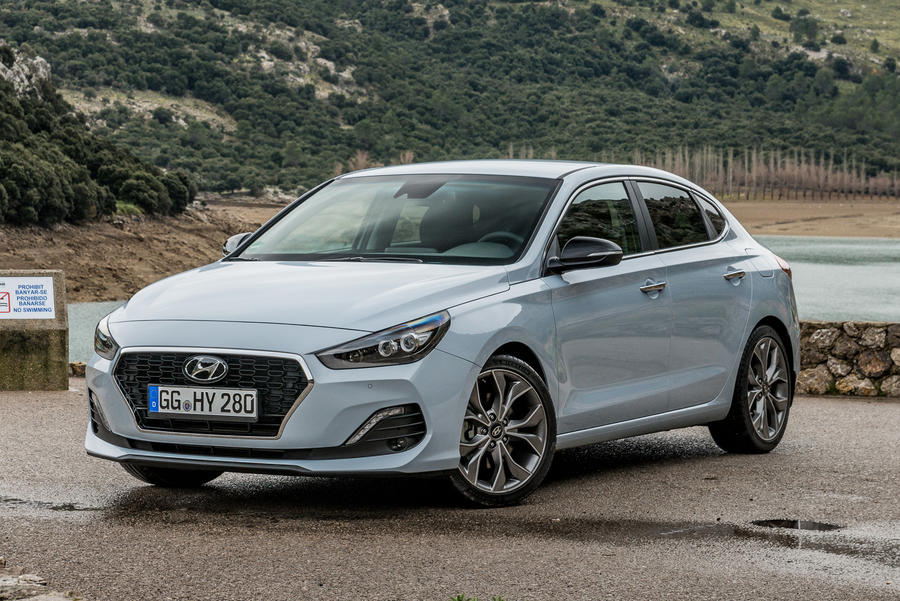 Nice that we are getting the choice

I welcome the fact that Hyundai has taken the bother of offering this body-style in the UK.  I think the Mazda is the better lookign car, but as pointed out above (but misrepresented by Autocar) that's a 4 door saloon (like an Audi A3 saloon) rather than a hatch.  Being really picky, someone really mucked up in terms of aligning the lower-side edge of the bonnet with the lower edge of the A pillar, so there is a quite jarring little step between the two elements.  I had not noticed it before on the standard hatch and estate (but I have not checked), but now that I've seen it my eye goes straight to this minor aberration.

I welcome the fact that Hyundai has taken the bother of offering this body-style in the UK.  I think the Mazda is the better lookign car, but as pointed out above (but misrepresented by Autocar) that's a 4 door saloon (like an Audi A3 saloon) rather than a hatch.  Being really picky, someone really mucked up in terms of aligning the lower-side edge of the bonnet with the lower edge of the A pillar, so there is a quite jarring little step between the two elements.  I had not noticed it before on the standard hatch and estate (but I have not checked), but now that I've seen it my eye goes straight to this minor aberration.

Yeah thanks for that, now I cant unsee it either. The bonnet line being lower than the wing line that goes into the a pillar looks really odd. Still like this type of hatch design though.

Needs to be 100mm longer

Looking at the photos and it seems to me that making the rear 100m longer would improve the proportions no end. It looks like its been cut short.

As I said earlier I really

As I said earlier I really like this style of hatch and skoda aside there arent many in this size of car anymore and making it more coupe-ish isnt a bad idea either, as said by wallmeerkat, it is a refreshing change from yet another suv. Hope it does well.