BACK TO ALL NEWS
Currently reading: Hyundai i30N prototype review: new hot hatch driven
UP NEXT
Supercars to e-bikes: the story of Romans International

The Hyundai i30N is the maiden offering from the manufacturer's performance sub-brand, and it's not your average first attempt
Open gallery
Close

Hot hatches may come and go, each one a potential reason to celebrate or regret – but the launch of a new dynasty of them, backed by one of the world’s largest car makers, is quite an occasion. And a brand new performance sub-brand is exactly what Hyundai is about to give us.

Hyundai has been involved in WRC rallying for the last four years and has been offering R5 customer rally cars for the last three. Next year, it will branch out into customer circuit racing, too.

Slowly but surely, it has been building a presence in the European motorsport scene – and it’s almost ready to launch its first proper performance road car with which to tempt race and rally fans to invest in a bit of the technology and expertise they see each weekend.

This fast and exciting new breed of driver’s car will come with a capital N in the model name. N stands for Nürburgring (where Hyundai’s new performance car team bases its European development projects) and also for Namyang (Hyundai’s vast R&D hub back on its home turf).

It was to the former where we were invited to get Autocar’s very first taste of what a performance Hyundai might be like to drive, in the form of a disguised prototype version of the new i30N hot hatchback, which is due on the market late this year. 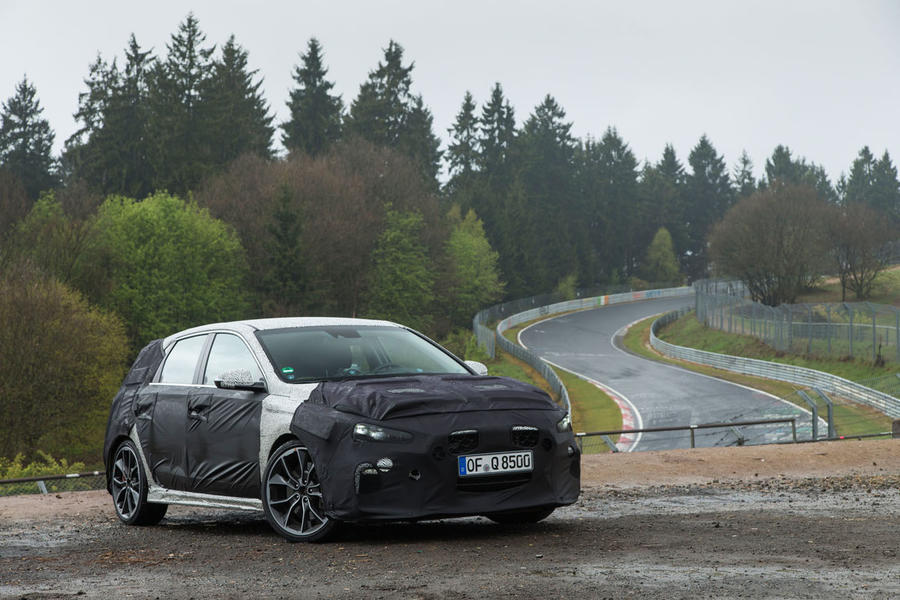 The man in charge at Hyundai’s Nürburgring test centre is Alexander Eichner – an engineer recruited by Biermann in 2016, whose CV includes lengthy stints working with McLaren, Mercedes-AMG and Porsche through the connections of his former employer, Bosch.

Eichner is no novice. And for the last fifteen months, he has been assembling an embryonic development team whose specialisms make them worthy of a cult 1980s American TV show. “We have a damping expert, a steering expert, an ESP expert, a bump-stop expert (pity the fool),” Eichner explains.

Through Biermann’s connections, the N brand also hired in consultant suspension experts charged with entirely recommissioning the i30’s running chassis and helping it compete with Europe’s best hot hatches from the get-go.

So the i30N isn’t just another family hatchback that’s been lowered and stiffened, but instead has completely new axles with totally recalibrated suspension kinematics, which bear such little resemblance to those of the standard i30 that Eichner can’t even tell you how the cars’ relative ride heights compare.

The i30N has a rack-mounted power steering system (the standard i30 still uses a less rigid column-mounted one), as well as adaptive dampers, uprated brakes and brake servos and an active locking front differential.

Upper-trim-level ‘performance pack’ cars, such as the one we tried, get a slightly firmer suspension set-up than the standard i30N will, plus 19in alloy wheels and Pirelli P-Zero performance tyres. You’ll even be able to equip items such as a rear strut brace, should you want to.

The car is powered by a development of Hyundai’s 2.0-litre turbocharged Theta petrol engine which, in less specialised tune, powers the firm’s Genesis Coupé and Sonata saloon.

Hyundai isn’t ready to talk final power and torque figures yet, but hints to expect somewhere between 260 and 280bhp for the higher-output version of the i30N – all of that being channelled to the car’s front wheels via a six-speed manual gearbox.

The i30N gets off to a fine start with a driver’s seat that’s large, comfortable and supportive, plus well-located controls. At idle, the engine sounds gently sporting, becoming more aurally assertive as you cycle through the car’s various drive modes.

The angriest of them, N mode, not only puts the car’s active exhaust into its noisiest setting but also sets the engine ECU to inject unburnt fuel into the exhaust on the overrun, making the twin tail-pipes pop and crackle during fast upshifts. Hyundai, rather cheesily, calls this 'tornado mode’. It’s nothing new, but it’s a welcome extra layer of sonic drama that an otherwise slightly plain-sounding motor could certainly do with.

As you move off, the car’s feelsome, hefty, well-paced steering announces itself to your fingertips. This is a system plainly configured by people who understand how important it is that a hot hatchback’s driver feels intimately in touch with its front contact patches. In terms of tactile involvement, the i30N’s steering is right up there: better than any VW Group product and not far off the feedback level of the last Renault Mégane Renaultsport. 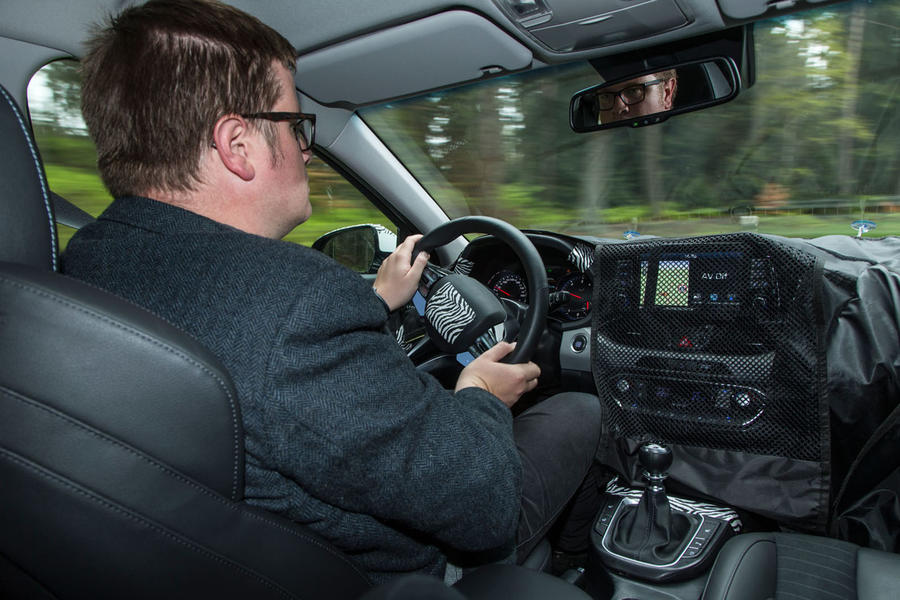 The car’s performance is strong: competitive with most fast front-wheel-drivers, with an accelerator that’s easy to meter out in Normal mode but sharper and more sensitive in N.

That 2.0-litre engine is plainly very rigidly mounted, contributing markedly to overall stiffness between the front uprights no doubt – but also struggling noticeably against its moorings as you tip into the accelerator travel: the sort of quirk you’d never experience in a Volkswagen Golf GTI. Hyundai says it benchmarked the MkVI Golf GTI Clubsport quite closely, but in some ways the i30N conjures an even more hardcore sense of purpose than that car does.

On smooth, fast, well-sighted roads, the i30N handles for the most part as you’d want from it. Even in damp conditions, the level of grip is high and steering response is particularly good – that weight and feel in the rack allowing you to turn in confidently, and body control containing the car’s mass very well. Handling isn’t as adjustable or as playful at road speeds as some rivals, but it’s still engaging.

When the road surface turns choppy, more evidence of skilful dynamic tuning is to be found in the car’s Sport mode damping. It keeps a very sophisticated sense of control over the car, allowing some ride compliance but preventing the body from heaving or deflecting, and maintaining an assured grip level at all times.

In respect of its ride sophistication and its control feedback, the Hyundai i30N will surprise people. It’s the exact opposite of what you expect it to be, given the number of wannabe performance car makers we’ve seen over the years fit powerful motors into cars that had little else of the special engineering needed to make them work.

Eichner claims that if the chassis is so good that it feels like it could handle even more performance, that’s just the consequence of a job thoroughly done rather than a promise of even quicker things to come. We’ll see.

But make no mistake about it: Hyundai is evidently very serious about its new performance ambitions, and about making a real, credible alternative driver’s car that deserves same-sentence billing with the hot hatchbacks we all know.

It’ll take a while to build up the reputational equity needed to convince people to buy a Hyundai N instead of a Volkswagen or Peugeot GTI, a Seat Cupra, a Renault Renaultsport or a Ford ST, of course. But in more ways than not, the hard work feels like it’s already been done here. 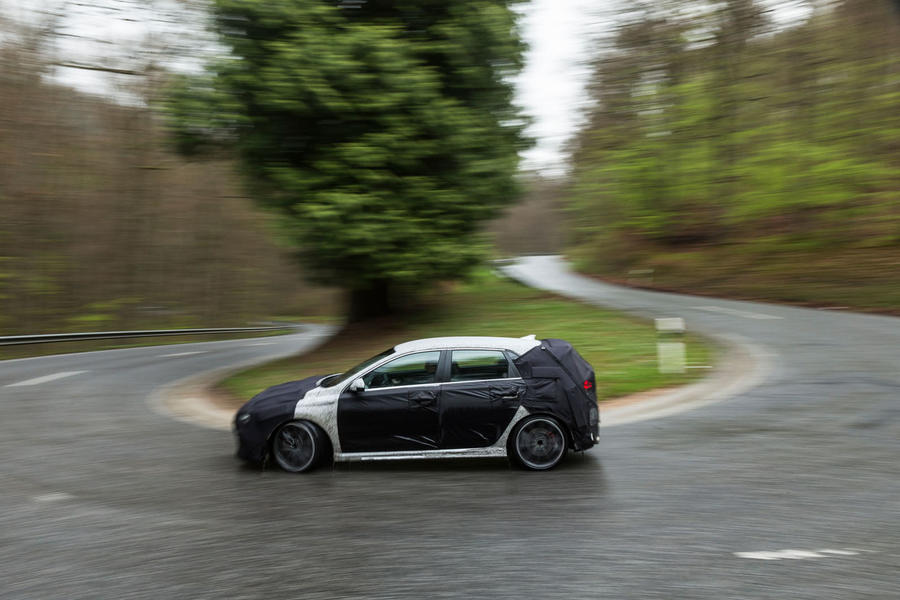 What this car and its other N brand stablemates offer will finally establish Hyundai as the maker of aspirational cars in the mind of the European public. Despite Hyundai/Kia's current crop of very well engineered cars with arguably the most attractive designs in the market, their cars are somewhat lacking in sparkle on the dynamics front. This car should change all that. And if their progress in WRC is anything to go by, I wouldn't bet against Hyundai becoming the new performance/dynamics benchmark for mainstream manufacturers within the next 5-7 years. Watch this space.