The Honda Civic Type R, in this its glowering, jutting and angrily blistered fifth-generation form, has landed. Faster, stronger, more powerful and more advanced than any of its forebears, the British-built hot Honda Civic has now begun rolling off its Swindon production line in serious numbers. But has its big moment finally come?

This is the first Type R in more than a decade to move back to all-independent suspension; the first to be developed as a performance machine from the ground up rather than adapted from an existing platform. This Type R broke the lap record for a front-wheel-drive production vehicle at the Nordschleife earlier this year. And this is the first review you’ll read anywhere on an absolutely final, series-production-specification, right-hand-drive example.

Like all Type Rs to date, the fifth-generation Civic is front-wheel drive and sticks with a traditional six-speed manual gearbox for what Honda considers the purest, simplest and potentially most dynamically compelling hot hatch driving experience possible. Compared with the forth-generation model introduced only two years ago, it has a stiffer and lighter body and entirely new suspension and steering systems. A relatively understated powertrain overhaul makes for a 10bhp power boost, while torque remains unchanged.

If you like your performance statistics, you may not be instantly impressed with this car: despite the 10bhp power gain and a final drive ratio shorted by 7%, the new Type R only manages to match the car it replaces on 0-62mph standing-start acceleration (at 5.7sec) and beats it on top speed by a 2mph margin. But don’t be fooled: Honda’s claim is that the superiority of the new version runs deep – and we’ve already confirmed some of its strides in our European first drive. 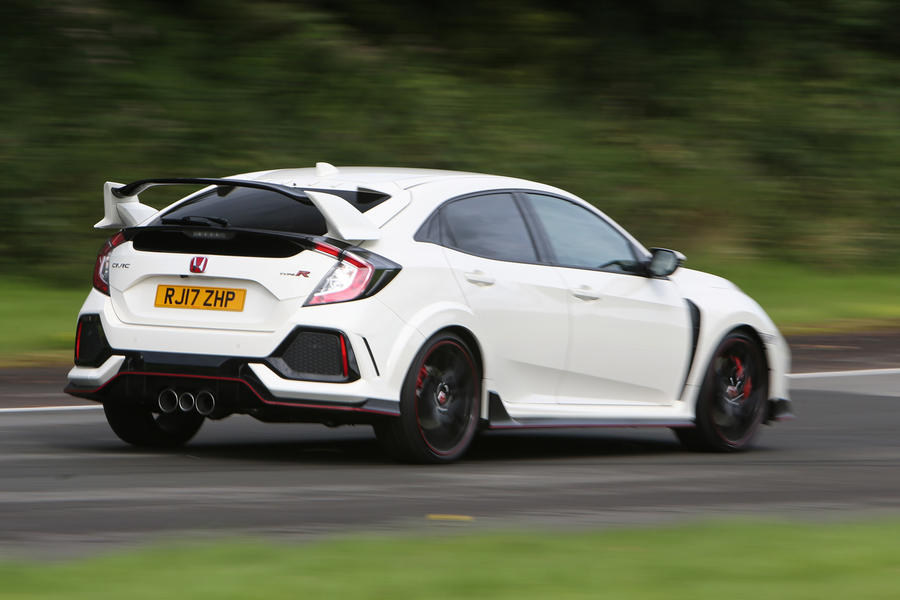 Like all of Honda’s current-gen Civics, the Type R is a big car, feeling a size larger on the road than most of its immediate rivals and suffering a bit on narrower British B-roads as a result. The car’s new platform does allow for an improvement on its infamously perched old driving position, but you still don’t sit as low in it as some would like and there isn't a huge amount of telescopic steering column adjustment for longer-legged drivers.

The car’s power steering, clutch, gear lever and brake pedal all feel very carefully honed – well-weighted, progressive and positive. But there’s a softness to throttle response that’s at odds with the encouraging precision and tactility of the rest of the controls – not to mention the Type R’s long-standing reputation for hair-trigger sensitivity. Plenty of more powerful four-cylinder hot hatchbacks have less turbo lag; but then, very few offer Honda’s naturally high-revving, fractionally oversquare cylinder design.

And the truth is, the Honda’s turbo lag is a problem that only threatens to spoil your enjoyment for so long. Once you learn to compensate for the engine’s penchant for a dramatic pause, you’ll find it has greater overall range than most four-cylinder turbos and also a more compelling power delivery than most.

Floor it and the engine kicks hard at about 3500rpm, then harder still at about 5000rpm, before revving cleanly and with only a gradually ebbing keenness all the way to 7000rpm. And it sounds like an engine; not like a whistling, fizzing jamboree on fireworks night and not like a video game. Sure, the car’s generously fast; but, more importantly, it’s characterful and genuine.

Ride and handling both seem like worthwhile improvements over what came before – but on neither front does the Civic quite threaten to unseat the hot hatchback ruling powers.

The car’s 20in alloys and low-profile tyres make for a noisy motorway ride, but a much more supple one than the old Type R had. Off the motorway, bump compliance is good with the adaptive dampers set to ‘comfort’, with a hint of woodenness evident as you ramp up firmness. Overall, though, the chassis feels taut, precise and decently absorptive in ‘sport’ mode; it breathes better and better with the road as you pile on speed.

Through bends, the Civic has a very grippy set of Continental performance tyres, good handling response, excellent body control for a big car, a slippy diff willing to make its presence felt and a rear axle that becomes gently mobile on a trailing throttle without ever threatening big angles. It all makes for a rewarding car to drive hard. 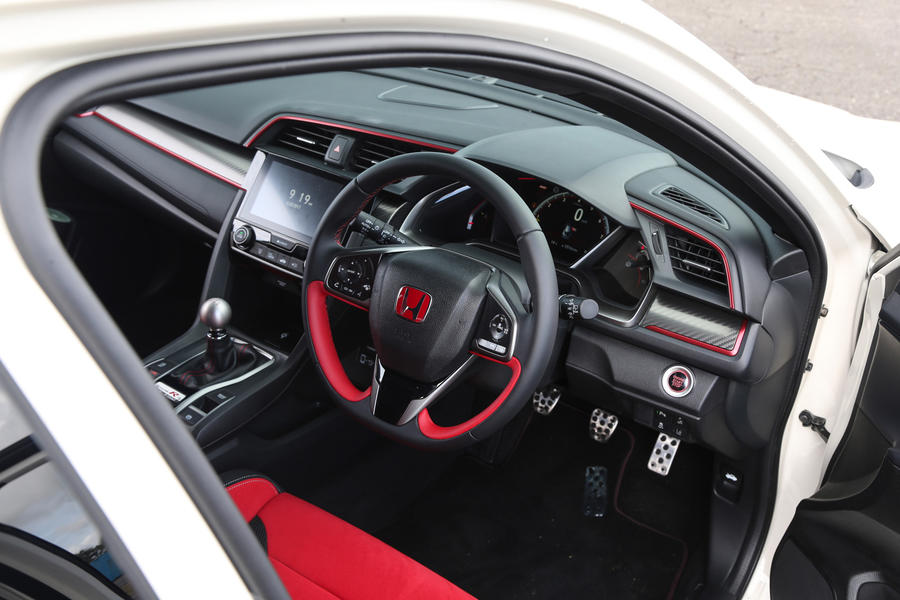 The junior touring car vibe that so dominated the appeal of the last Type R is very much the new one’s defining character trait. This time around, it comes in a package that can be gentler-riding and slightly less wearing when the occasion calls for that; but Honda’s race-car feel is still central to its appeal. And, frankly, that ‘speed and composure before absolutely everything’ philosophy is either everything you want your hot hatchback to be or it’s not even close.

It has taken a great deal of skill and commitment to turn the Type R into a hot hatchback that just keeps getting better the more you ask of it on the road. But the fact is that several of its rivals offer the more accessible fun factor that many would imagine ought to be a hot hatchback’s mission to provide.

My instinct is – albeit on first acquaintance only (watch out for fuller assessments, including track testing, over the coming weeks) – that both a Volkswagen Golf R and a Ford Focus RS have greater all-round driver appeal and that, if money’s no object, a Mercedes-AMG A45 would outrank all three for the most raw and absorbing thrills. And that is, of course, to say nothing of the new Audi RS3 Sportback – for which a UK-roads verdict is now imminent. Stand by for a comparison test including all five cars, just to be sure.

But, even among that lot, the Type R may now have become the market’s fastest-improving hot hatchback. It remains one of its most temptingly affordable, too. And those are two more reasons why, like it or hate it, you just can’t take your eyes off it. 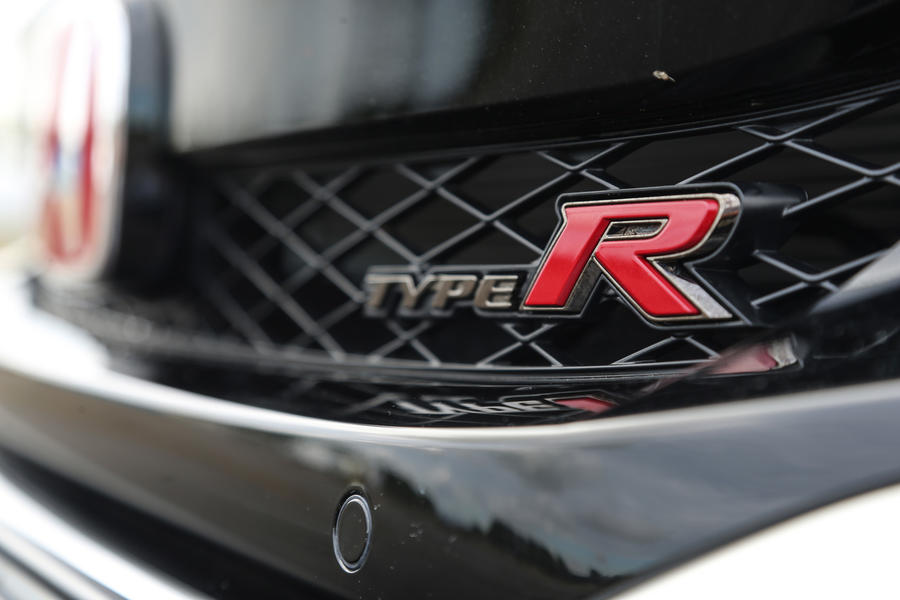 Your sister magazine seems to love this car and have rated it above the seemingly unbeatable Focus RS in a comparison test.

That might be because they look more at the overall picture such as comfort and practicality but they still reckon it is huge fun in the bends. The looks are not to eveyone taste but seeing them every day at the port where I work, I'm starting to like it more.

How to undo very good work: employ a committee of stylists....

You know: lightness, Honda engineering, painstaking development, dependability (we'll ignore F1...), dealer network, pricing and warranties....the good ol' R has a lot going for it.  On all previously mentioned 'metrics' I'd take it over the Focus and the Golf R.  But dear o dear, Honda: get yourself a proper Head of Global Design and stick to your traditions. If that means 'intriguing' Japanese design, then so be it: you are a Japanese brand - celebrate it. Curently, this 'global design committee let's-chuck-everything-at-it' approach does not work.

The sheer ugliness of this car defies belief. Beauty is in the eye of the beholder and all that, but the stylists must just think in a completely different way to me!